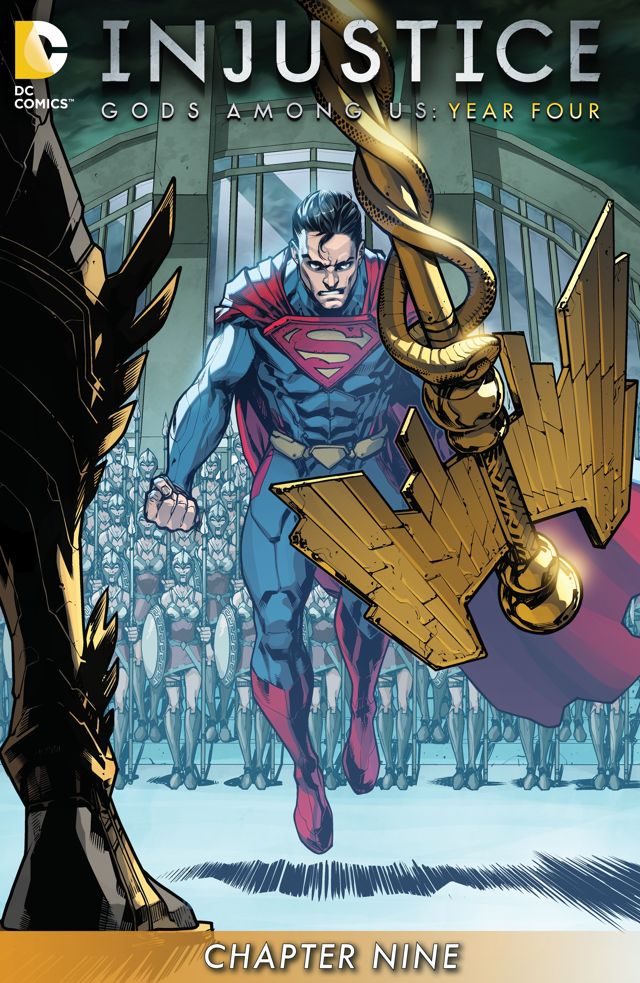 Click to enlarge
All sides look on as Regime Superman kneels with a broken arm, while Wonder Woman towers over him. Wonder Woman tells Regime to surrender, but he refuses and blasts her with heat vision. Wonder Woman withstands the blast, and bashes Regime further. Regime tries the end the battle with a determined punch, but it isn't enough. Wonder Woman beats him into the ground. Wonder Woman is about to apply the coup de grace but is stopped with blast of energy from Sinestro, who reminds Superman that fear is his friend.

Story - 2: Wonder Woman herself stated that this is a fight to the death, why is she offering Regime the opportunity to surrender, break the rules, and place her mother's life in further jeopardy? Inconsistencies like this weigh down what could be a good match-up. Unfortunately, this is going the way of the circuitous superhero fight, where one hero gets the upper hand, then the other comes back. Now, if that doesn't happen, then everything that's been displayed in this universe is called into question. I don't believe that Regime Superman, who survived Mogo, and pushed the planet into the sun, would cringe on his knees like a punk from a broken arm. Neither do I believe Wonder Woman could withstand his heat vision, particularly when the image of someone being blasted away right next to her shows its apparent force. This fight has done absolutely nothing to push the story further. In fact, it's a reminder of how much has been lost since Year Two.

Regime Superman being beaten senseless, while juxtaposed with his kill feats leading up to and after his fall from grace, serves as a reminder as to why he should be winning this match. However, the same tired line reminds us that these fights are meaningless. Whenever you read "I'll do what I have to do!", that means that Regime won't do a blasted thing. Batman will live, Wonder Woman will wreck shop on his trunk-less behind, and readers will somehow still enjoy it.

Cover Art - 3: Would anyone know that Regime is facing Hermes, particularly with the Amazon army behind him, as if he was leading them? Not a good choice of position.