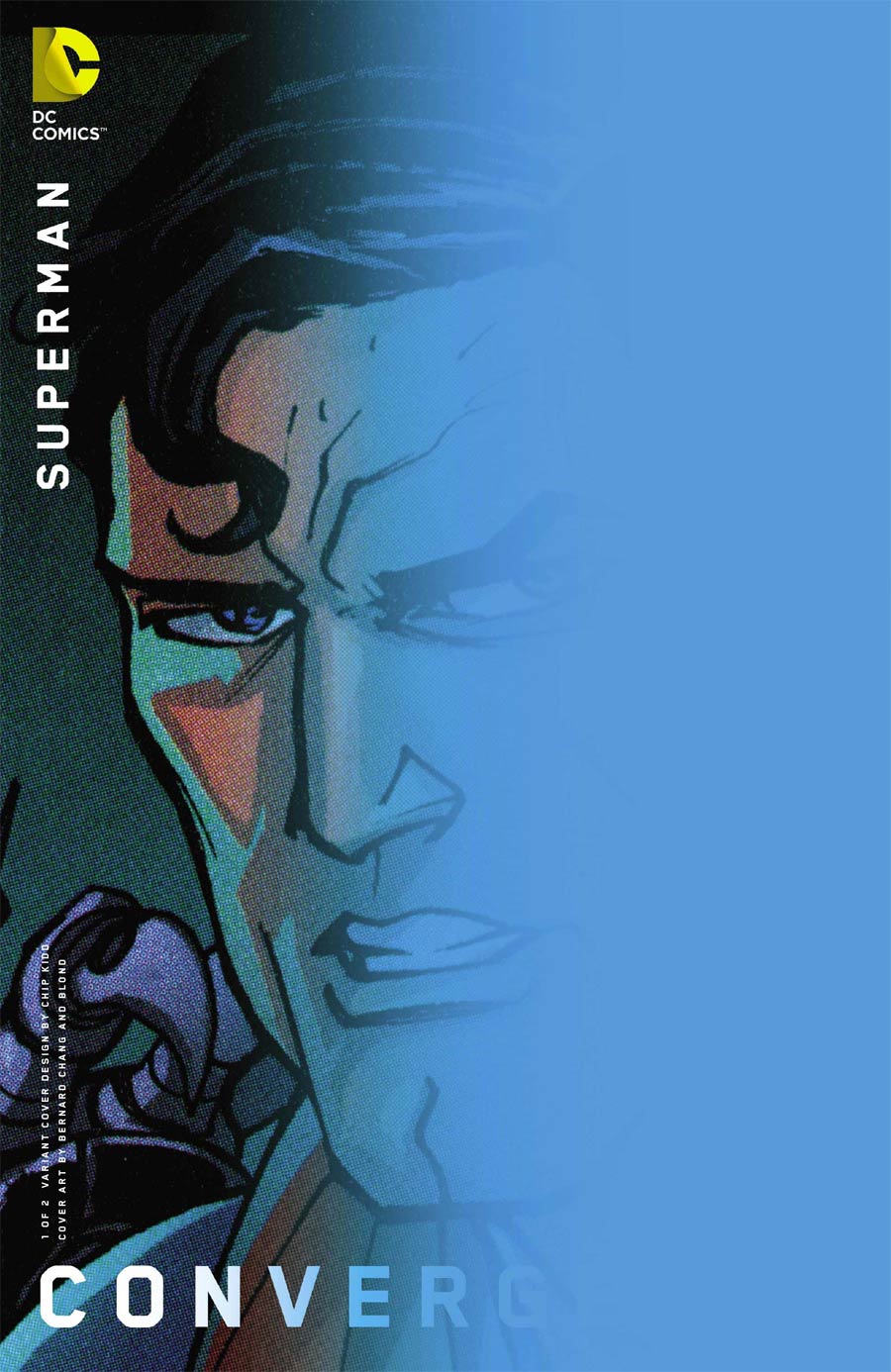 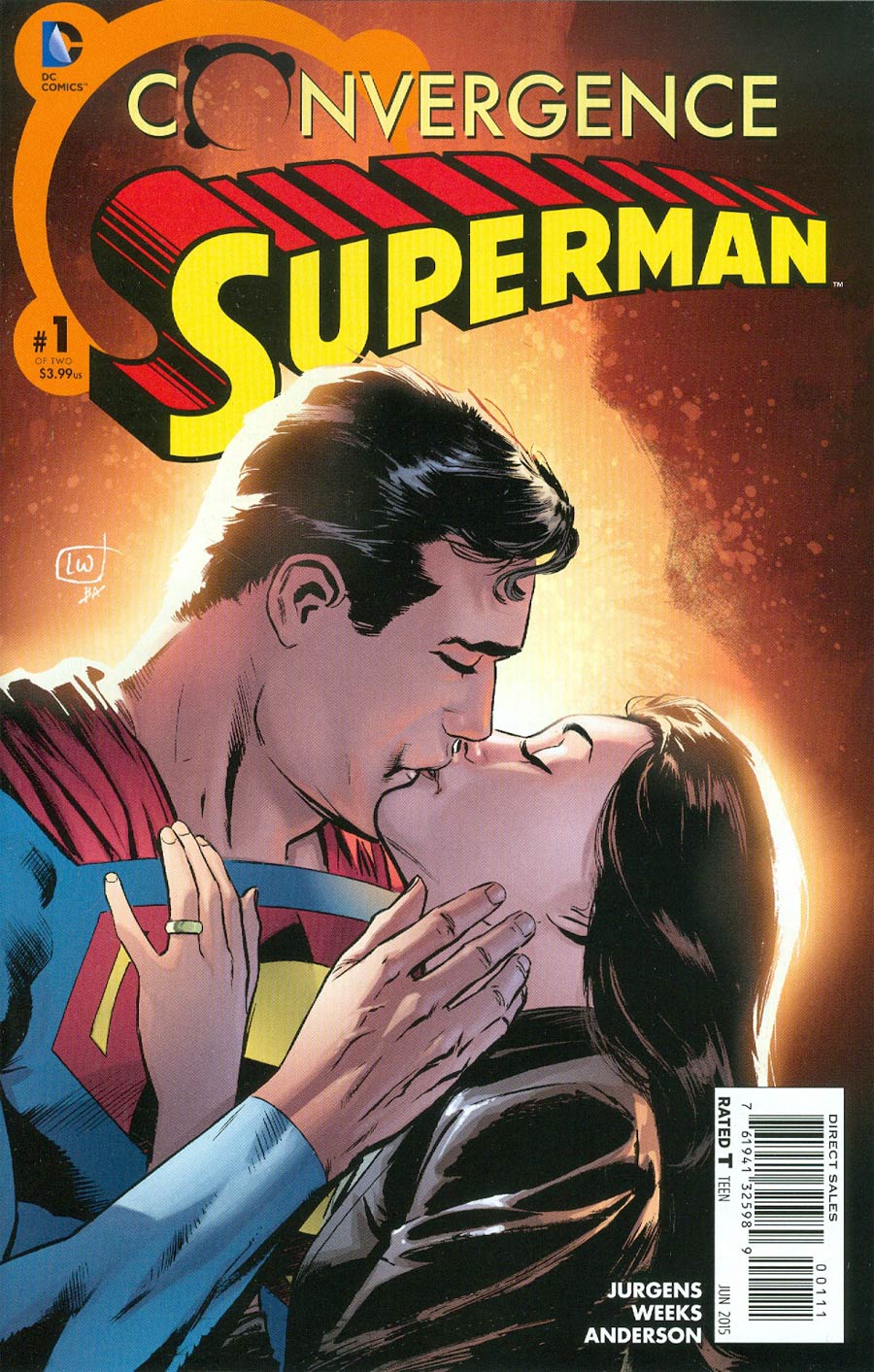 A year ago a mysterious being named Telos snatched up cities from all across time and space. They were aware of being trapped inside a bubble but they were otherwise unharmed nor without resources. Every city, no matter the period, had their heroes stripped of their abilities until they arrived on Convergence World where they would be pitted against one another until only one city survived.

And so to Gotham City: DCU proper: Approximately 2010.

A year ago, Lois Lane, Clark Kent & Jimmy Olsen were taking part in a journalism convention for the Daily Planet but the dome fell trapping them inside. Despite them believing they were merely segregated inside the bubble the trio could not resist their calling. They continued to file stories ready for when the bubble shut off, another of their trio, despite being powerless, also couldn't resist his calling and took inspiration from Batman to fight for truth and justice as a vigilante - that man was Clark Kent, aka Superman!

Clark, decked in a balaclava and blacks is leaping across rooftops despite the misgivings of his wife Lois via wireless earwig. Clark leaps down into the centre of a big drug deal. The dealers in the dome who now had their supply cut off were synthesizing new untested drugs from any chemicals they could cobble together, killing many people in the process. Jimmy, photojournalist, arrives and covers the story with excitement as the vigilante fights the horde of criminals.

The dome suddenly dissipates and one thug grabs a flamethrower from their arsenal and sets upon Clark. The removal of the dome restores Clark and when the flame thrower runs out of fuel Superman, the one true Man of Steel steps forward. The dealers are suspicious of Superman's reappearance as it was widely known that while in the bubble no superheroes had their abilities, cue a shower of bullets. A burst of heat vision disarms the majority of dealers and one desperately grabs Jimmy and presses a gun into his cheek. A burst of super speed and Superman grabs Jimmy and drops him safely on a nearby rooftop before soaring home to his wife.

The chemistry between the reunited couple is heartwarming. Lois herself says, "My Superman has returned!" the relief that the dome is gone and that they can return home to Metropolis to give birth to their baby is clear. The two embrace and Lois warns him not to check the sex of their baby now he has powers again and the couple share a rare moment of peace, quiet and romance - at least for a minute.

Work doesn't wait long and Lois plays a recording that was transmitted as the dome was removed.

From this message, a being called Telos tells that unless they win a battle to the death against other similar cities they will never return to their proper place in time and space.

Superman puts in his earwig so he and Lois can communicate to see if what the recording said was true, whilst skyward he discovers it is true. With the costs so high, Superman swears to find a way around the rules requiring him to kill the other champions and flies into the next city to investigate.

The heroes inhabiting the city are Batman (Thomas Wayne), Subject 1 (Kal-El), Captain Thunder, Green Lantern (Abin Sur) and Cyborg. They too have heard the transmission and are adamant they must win. When they detect Superman's arrival Batman instructs them to kill him.

Meanwhile Jimmy has visited Professor Hamilton for answers, how and why Telos chose to steal Gotham specifically for example, unfortunately Emil doesn't have the answer but when Jimmy swears to cover the story Emil unveils what he has been working on as a way he had planned to traverse the domes. Jimmy is astounded to be given the car keys to the ultimate car, the Whiz Wagon!

In "Gotham: Flashpoint", Superman admits to Lois that it feels good to finally escape from the darkness of Gotham. The transmission is cut short as Subject 1 hears the voice of Lois Lane alive and well in Gotham DCU proper, in a determined dash Subject 1 knocks Superman to the ground. Captain Thunder wastes no time battering a bewildered Clark, initially at least as Superman soon turns the tables. Superman doesn't strike the expected killing blow and asks Thunder to listen to reason. Batman is not convinced that Superman is genuine and orders his strike team to press on. Superman begs them to stop and listen but Cyborg and Green Lantern push forward with laser attacks. With Clark pinned they question whether he is part of a strike force from his city. Before Clark can convince the Flashpoint heroes that he's not, Jimmy arrives in the Whiz Wagon and what little restraint they had is given up.

Subject 1 arrives in Gotham: DCU proper and realizes that Lois is not dead, though he confuses his lost Lois for this one. At the same time Batman from Flashpoint is scanning DCU: New 52. The sacrifices they made had meant the New 52 would exist in their place, Bruce Wayne would live but Flashpoint still lives albeit only a piece but to ensure it is restored Thomas Wayne must kill his son over and over again, he weighs up the cost of the prize while Subject 1 has tracked the radio frequency of Clark's earwig back to the source.

Subject 1 flicks the door off its hinges and confronts Lois. He swears to save her from all of this, Lois tries to tell him that she isn't the Lois he knows but what she says falls on deaf ears. Fearing for her life and her baby, Lois screams for Clark...

Dan Jurgens writes a story that beats with a heart, that reaches into the rich era of stories and cultivates a compelling and genuinely heartwarming story. Threats, action, drama, sacrifice, romance, character building... it's all there and in a bittersweet way reminds us in one issue of everything we've lost since the New 52 began. I'm not a hater of the New 52 - I just didn't see the point when all you needed was a good creative team - EVIDENCE here!

I also know from the set up of this story how it's going to play out, and even the spoilery interviews DC sent out haven't ruined the experience. Do I trust in Dan Jurgens to treat Superman well? Of course I do because you only have to flick through this to feel an urge to go back and start reading about Clark and Lois from the beginning again - that's an achievement for the fans and for DC on a commercial basis.

I love that even powerless Superman can't just sit back and let the 'city' fall. I can see why Superman was taken from his home city, I do however, share Jimmy's questioning of why. I find it unfairly 'advantageous' for Flashpoint that almost all the League were visiting Thomas the day they were domed in while Superman was the only hero in DCU proper (at least here in this story. This might not be the case in full swing Convergence).

We already know the result of "Convergence" as it's been thoroughly spoilt with artwork from Aaron Kuder, Jim Lee and Greg Capullo but I'm still enjoying this glimpse back at a time when Superman was truly the hero that inspired everyone, that raised the bar, that spearheaded the genre. I can't tell you how much I love this issue because I'm only allowed to give it a shield rating of 5. Everything was there, everything, even with the comfort zone of Metropolis out of the equation, Lois and Clark were a team. Clark was a man, not just an identity. Superman was noble, powerful, heroic. Jimmy wasn't just snapping pictures. Emil was back to being his fun doddering old self. Superman versus the Flashpoint characters was interesting - it reminded you that at one time Superman didn't just smash and crash through everything.

Art - 5: Lee Weeks has gone to town and given us a visually superb issue with a Superman that literally takes your breath away. I flicked through several times and I can't think of anything but the word "wow". It's not the underpants thing, If Superman (after Convergence) decides to wear a suit - be it the onesie or iconic one, Weeks needs to be working on the Super books!

Cover Art - 5: I'm not a Diana Prince hater like many but Lois and Clark together are just electric. Nobody can look at this cover and say they don't belong together. Again like the story, it's breathtaking and sad at the same time, because you know that after this is over there isn't a writer in comics seemingly able to write about a proper loving couple in comics.

Variant Cover Art - 2: Some Adobe Illustrator layers repeatedly placed over other artist's work, maybe a chapter separator at best but not a cover.