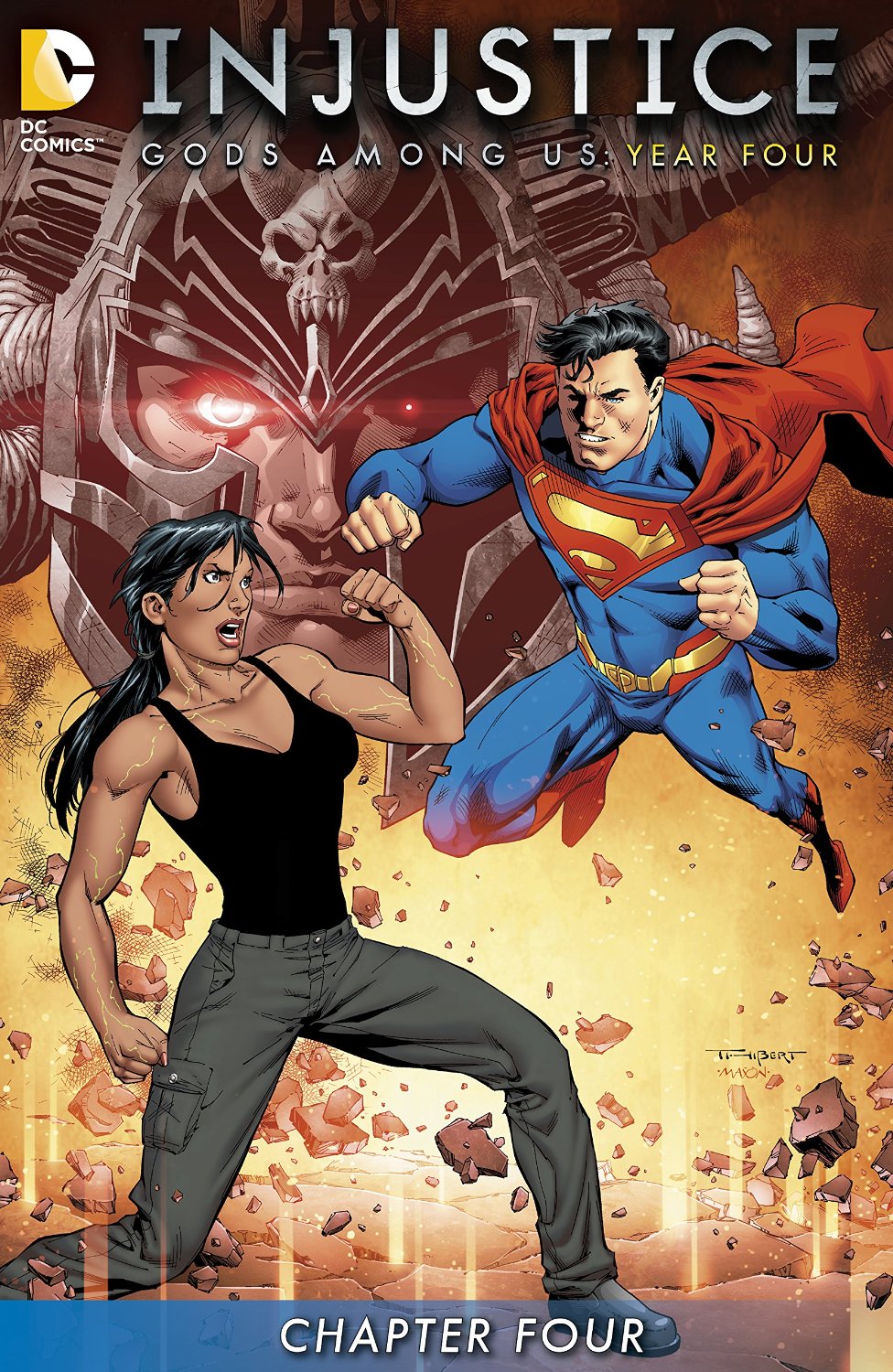 Click to enlarge
On Olympus, Zeus and Hera look at the battle between Regime Superman and Renee Montoya. Hera offers that the gods should reclaim their place in the lives of men, as too many now believe themselves onto gods. Zeus is dubious of Hera's motivations, but allows her and Ares to get involved. On Earth, Montoya and Regime contest each other, until the rest of the Justice League arrives. Regime tries to stop Montoya, to reason with her, but the super-pills that she has consumed have enraged her past the point of rationality, and shortly after, they consume her life. Bruce Wayne arrives on the scene, and collects Montoya's body, blaming Regime Superman for her death. Regime allows him to leave, after extracting a surrender of sorts from Wayne. Wayne returns to what remains of the Insurgency and tells them that despite their situation, it isn't over.

Story - 1: Of course it isn't over, there's still a year to go and sales are better than healthy. Buccellato has decided to ignore much, if not all, of the groundwork lain by Tom Taylor, and regress both the characters and the story between its inception and Regime's battle with Kalibak. That time period still offered a character who was struggling with the direction he had taken, before taking the final step towards his complete corruption. He then killed several characters, most notably, Green Arrow, who was the only one that posed no actual threat. No, GA was killed because Regime was angry, tuit suite. It was a despicable act, but one that cemented the torus of Regime Superman. He was now a killer, and would do what he felt necessary to get the job done. In the most recent fight between him and the Batman, exclaims this position for all hear... well, read, as a needless reminder of what he's become. Only, he hasn't become that person. No, he's been returned to a facade of him former self to extend the cash-grab that is Injustice: God Among Us. The story is supposed to be five years long, even if there are no stories to tell after Year Two. So, when he has Batman within his sights, dead to rights, he'll just let him go. He won't apprehend him, force him to give up his location, and take him out of the picture. Perhaps he might follow him surreptitiously to his bunker, but that would require a level of thought and planning denied Regime or Superman proper as a character. No, he's just going to let him go, because while everyone else: The Joker, Martian Manhunter, Captain Atom, Green Arrow, Black Canary, Mogo, Ganthet, etc., while these characters were expendable, there's just something about Batman, like there was about Mary. From start to finish, that is the ultimate disappointment of this series: the chance to do something big and weighty, but was never thought of any further than the bottomline.

Superman does not kill. He doesn't. The character is against killing and always looks and finds another way to execute his solutions, without taking a life. However, in those instances where he has crossed that line, it's been an opportunity for whomever is at the helm to craft something that challenges that notion, reaffirms it, or do away with it all together. The strength of that taken chance rests on the implementation of the story. The right story, the right craftsmanship, will allow a reader to reconsider positions, and perhaps, challenge notions that they've long held as indelible. The blancmange send-up does no harm, but also made such an effort appear needless and foolish. A poor showing is just a porous violation of the character, for little other than a lack of creativity, or the simplistic notion that decorum withheld all ways sells. Superman's transition to Regime Superman starts with a vile and disgusting murder of the Joker, one that goes against what the character has been to stand for, and had that been followed through with proper consideration, who knows? Injustice may have been a series worthy of being likened to Sophocles' seminal cycle, and there were places and points where this could have transpired. Those points needed to remain fixed to allow Regime to properly grow into what we know he's going to become, and not vacillate between hi current and former self. We could have been shown, with great clarity, what happens to Superman without the purported balance that he has been given, and why or why not that balance is necessary. We could have been given a good story. Regime letting Batman literally walk away unchallenged has strained the credibility of this story past its elasticity, and is a reminder of what truly drives this series, and when why, when it closes next year, how unimportant it will have been.

Art - 4: The looks of sadness on the characters' faces emote well, as they display the anger and despondency on the waste the war between themselves has been.

Cover Art - 4: Regime Superman fights woman in A-Shirt. That pretty much says it all.