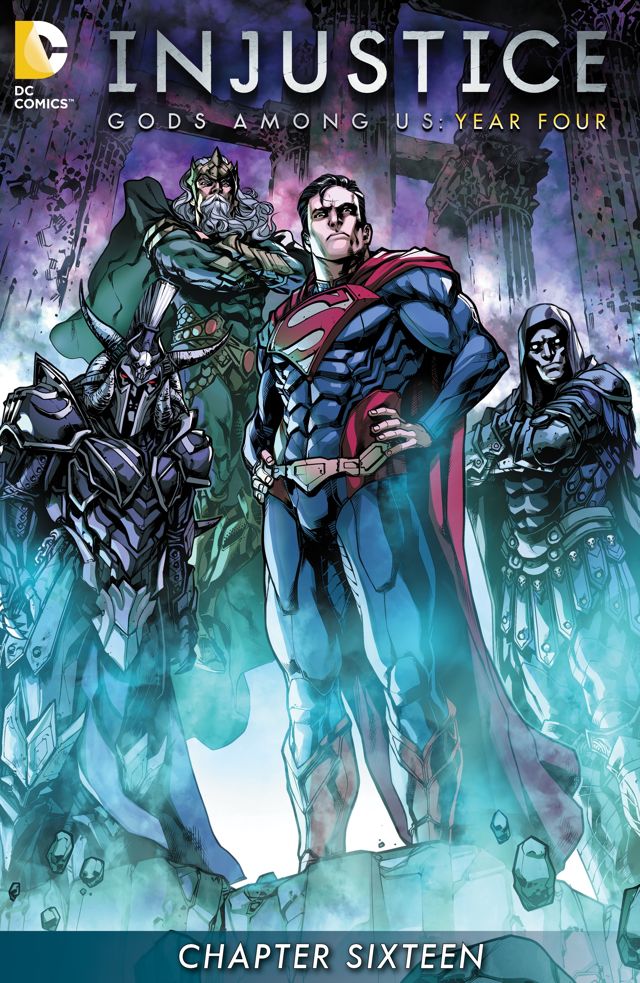 Click to enlarge
Ares recounts his origin, in which he goes from being just a son of Zeus, to being an embodiment of war itself. Ares also reveals that the war the League is fighting is of his own making, and that Regime Superman is merely a card in the deck he's playing from. Wonder Woman lashes out at Batman, verbally, accusing him of abandoning Regime Superman. Batman responds that Clark crossed a line that cannot be crossed. Their discussion is interrupted by the thunder of a gigantic tidal wave that appears and threatens to submerge Themyscira in its watery fury.

Story - 2: No one reads the classics anymore. It's a shame as the knowledge of reading and understanding such foundational literature is a great boon to writing, particularly with Western Literature. The Greek pantheon is at so much of the bedrock of what many find to be entertaining, it's amazing that they are reduced to the caricatures that parade around the pages of Injustice. These were the reality show television stars, well before the Kardashians entered anyone's living room. You enjoy complex characterization? Greek pantheon. Suspense and volatility? Greek pantheon. Epic storylines of never-ending proportions? Greek pantheon. The beginnings of the Injustice storyline borrows, if not flat out steals from Euripides' Heracles. Superman, in a fit of madness, kills his wife and child. Injustice isn't alone in that "theft" as what befell Heracles in myth and motivated him to expiation through his labors, has been used countless times across genres to do the same, but with less significant results. Ares is the less favored son and child of Zeus (that falls to Athena and Heracles, respectively), that much has remained canonical, but his monologue is pathetic. Ares isn't the mere god of war, Ares is war personified. War occurs because Ares' wills it. He is the aspect of the human psyche that craves and lusts for confrontation and conflict... like reality television. Ares's relating his experience and distilling into bullet points like a first year university student is beneath him. It's akin to someone giving a dissertation on the beauty of a strand of their hair. You're a god. You are realization of battle. To hear you moan through flashbacks about how bad your daddy was to you as a kid is beneath you. Such a waste.

So, Wonder Woman and Batman walk into a tent. Batman's alive. Why is he still alive? Wonder Woman rightfully assails him on abandoning Clark, and Batman's defense is guano. If Clark crossed a line they can never pass, then why is Harley Quinn a member of your team when she was equal partner with the Joker in abducting Lois Lane, the murder of Jimmy Olsen, and pushing Clark over the edge? That's right, Injustice fan, the Joker didn't accomplish what he did on his own, Harley is equally responsible, but in the best example of plot induced stupidity, along with character induced stupidity, it doesn't matter, as Injustice has mastered what few DC comics have been able to do these days: the art of serialized storytelling, but more on that next time.

Art - 4: Tom Derenick is the premier artist on this book. No one else displays such rough facial anger, quickly followed by pathetic (secondary definition) softness that nears tragic epiphany.

Cover Art - 3: Why is Superman standing about with those he's in contention with?! Can we have a cover that is somewhat representative of what is inside, or must everyone be a didactive reminder of the old adage?