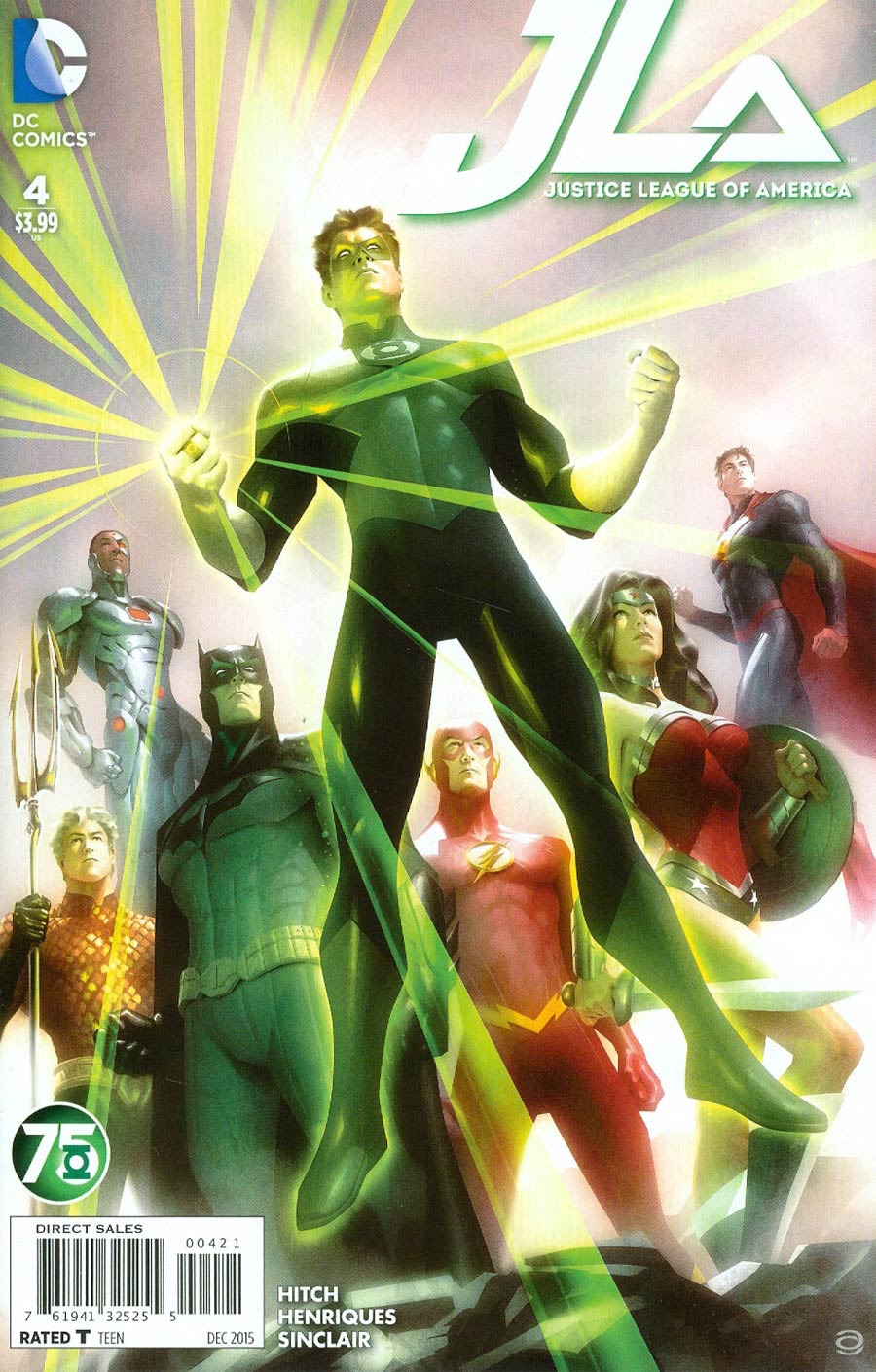 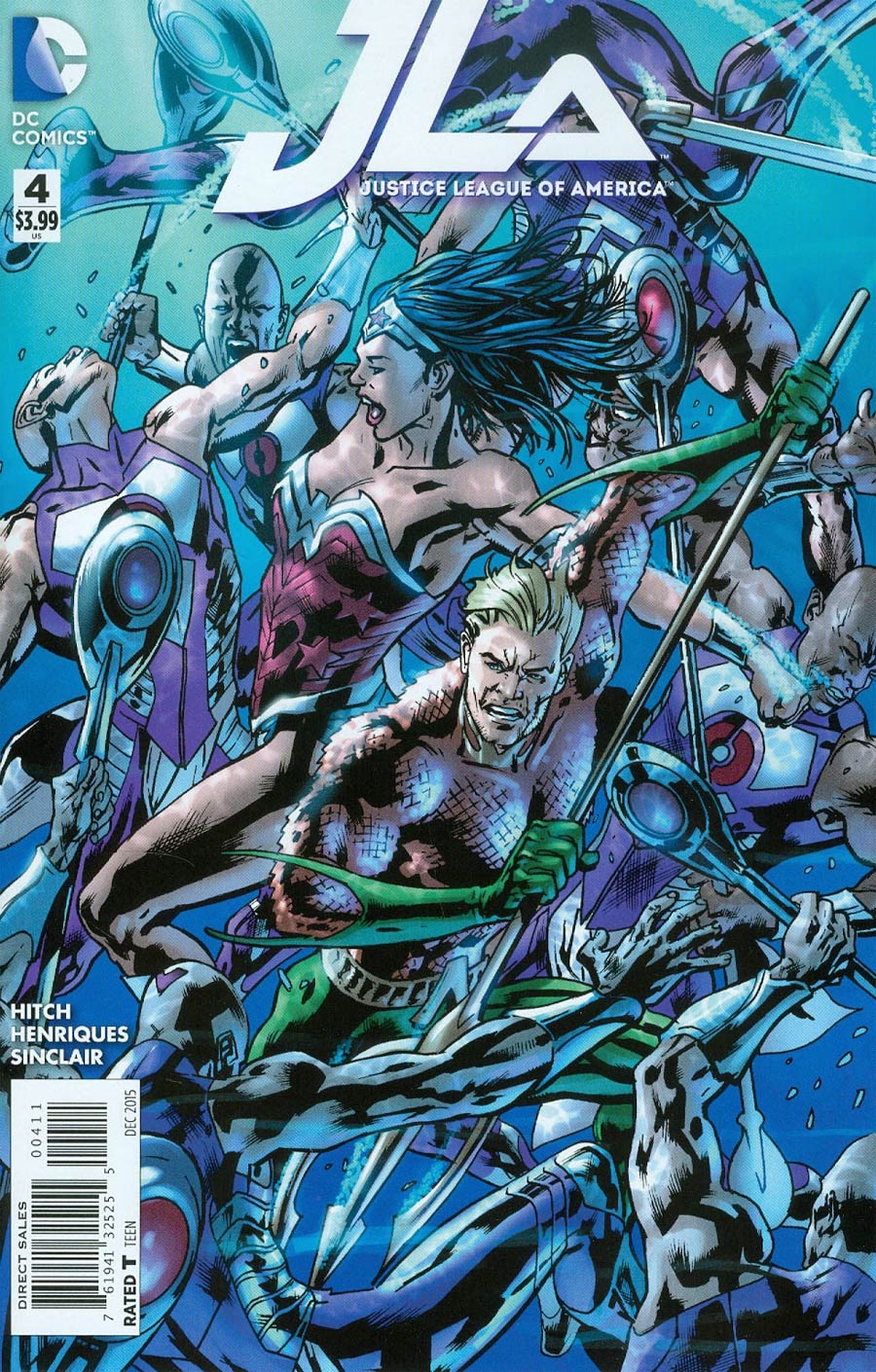 Click to enlarge
Superman hands Cyborg vial of his blood, asking him to test it. He and his father, Dr. Stone, are already working on Batman's Kryptonian protocols. Dr. Stone postulates about the endless scientific and medical advancements that he could achieve by mixing Kryptonian and Earthling DNA.

Rao is recruiting people to become his new prophets. He needs even more disciples to spread his blessings to every single person on the planet. No one must be left behind. Even the UN Security Council votes to open their boarders to Rao and his emissaries.

Batman has an unconscious, former criminal in an MRI machine at Gotham General. A doctor helps him scan his body, brain, and blood. He is trying to explain the radical change people are experiencing around the world.

A quarter of a million years ago, on the planet Krypton, Hal Jordan is escorted to Rao, the current reigning god of Krypton. He is old, eccentric, and dozing off. Hardly the picturesque, Christ-figure that has come to Earth. He asks for Jordan's help in his kingdom's civil war. Jordan tries to beg off, citing well known sci-fi space-time laws. But the 300 year old potentate -and supposed deity- easily convinces him to help.

The doctor at Gotham General has found protein marker in the former criminal's DNA, and parts of his brain enlarged. He is being genetically rewired.

A Mother and Father drag their young daughter to be "blessed," against her will. As soon as she is touched by the prophet's staff, she is happy, and agreeable.

Arthur and Mera watch the news from their lighthouse at Mercy Reef. Arther is confident, that the people of Atlantis will reject this god. Mera is not so convinced.

Superman asks his computer at the Fortress for all of the information it has on the Kryptonian sun god. Rao uses his super-hearing to listen in on Superman, Batman, and Cyborg as they compare notes.

Superman has the same protein markers that the new converts do. They theorize that these markers did not suddenly appear, as with the new converts, but were bred in, a long time ago.

Speaking of a long time ago... Hal Jordan and the 'old' Rao prepare for a diplomatic mission to Argo, two hundred and fifty thousand years in the past. A ring of prophets encircle the old king, and transfer a portion of their life-force into the god. Rao is instantly younger, livelier, and ready to meet his enemy.

Present Day: A prophet attacks Batman at the hospital. He and the doctor escape, but not before stealing the prophet's staff.

Back at the Fortress of Solitude, Rao and his guard engage Superman. The supposed god is not happy with Superman's non belief.

Story - 3: The story moves forward, Superman is proactive, and we begin to see where events may be headed. But the bulk of the story is comprised of characters standing around talking. Bryan Hitch can do better.

The writer/artist has shown an deft ability in tackling big, broad ideas, and flashy action scenes. From a room full of dead Supermen, to continued religious allusions, Hitch has not backed down from his summer blockbuster promise, and has drawn complementary comparisons to Grant Morrison's JLA.

Hitch has also impressed in the little things. His Daily Planet scene in the first issue showed an understanding of his characters, and their essentialness, in efficient and entertaining ways. In this issue, we see Dr. Stone all but drool over the vial of Superman's blood. His mind immediately runs away, fantasizing about the possibilities. It might help, mankind, but it would break Superman's trust. His son, Victor, has to reel him in. For those familiar with Dr. Stone, and his relationship with Cyborg, this is light and minimalistic, while still hitting each note beautifully. A perfect exchange.

What holds Hitch back is the things that fall in-between. The wrinkles, and twists on the path from point A to B. The journey. On Earth, the two most active characters are Superman and Batman. But that's not saying much. They each want to examine DNA, and enlist someone for help. They, and their proxies, arrive at the same conclusion at the same time. Not only does it unfold in a pedestrian way, but Superman and Batman both working on it, gives us a double portion of bland, forensic science crime fighting.

What if, instead of standing around a hospital room, Batman and Aquaman sneak into the Cathedral? Batman can find answers there, while Superman takes his newfound knowledge of manipulated Kryptonian DNA straight to Rao. We get the same Superman vs. Rao cliffhanger at the end. Plus, the added bonus of Batman and Aquaman creeping around, while trying -and failing- to avoid detection. It would provide much more suspense to carry us through.

On the bright side, Superman takes matters into his own hands. He volunteers his blood to Victor. Batman did not have to fight, or trick him. He didn't covertly take a sample of Superman's DNA and run tests on it without his knowledge. Yes, Batman prodded the Man of Steel in previous issues, but Hitch found a way to let both characters be themselves without shortchanging either in the process.

Unfortunately, the lackluster plot points make it more difficult of the writer to show character. As mentioned above, Superman and Dr. Stone are handled well, but they have limited opportunities to shine. Batman is not out of character, but boring. Cyborg, and GL are stock, simply used to further the story. Aquaman gets a cameo, and two characters -Wonder Woman and Flash- are benched altogether.

The writer keeps our interest by revealing more about Rao. The older version is not what we expect. Intriguing. When we see his life sucking ability, and the similarities between the Kryptonian prophets, and the ones he is amassing on Earth, the young Rao's intentions finally become clear.

Art - 3: Hitch is better on a bad day, than most artists are on their best. But though this issue was a month late, the art still appears rushed. Some faces are well rendered, most are not. Many lack detail.

In certain places the artist pulls the 'camera' back to avoid having to add detail, but doesn't land on a pleasing shot to make up for it. The establishing shot of old Rao about to suck power from his prophets is a good example. It pulls too far back to make much out except oval-like blobs surrounding Rao. That's fine, but we don't even see the entire circle, or the chamber it takes place in.

The tension and emotion that could have been conveyed in Rao's face -as well as others- would have helped the ascetic and story appeal immensely.

That could all be forgiven if Hitch would have done better with set design. Not only is being on Superman's home planet a big deal, but going back to ancient Krypton was a missed opportunity. The penciller could have really shown off the ancient temple Rao ruled from, and the masses that served him. It was not bad, but Hitch set a high bar to begin the series. Now, despite missing a month, this issue lacks the quality he is capable of.

Cover Art - 2: Why, or how, this came to be the cover for this issue is a mystery. Aquaman had a one panel, plain-clothes cameo, and Wonder Woman was completely absent. But here they are fighting Rao's devoted. I hate to be a stickler, and say "it didn't happen inside the book," but these two characters weren't even in the story.

This would have been a great cover... for issue five.