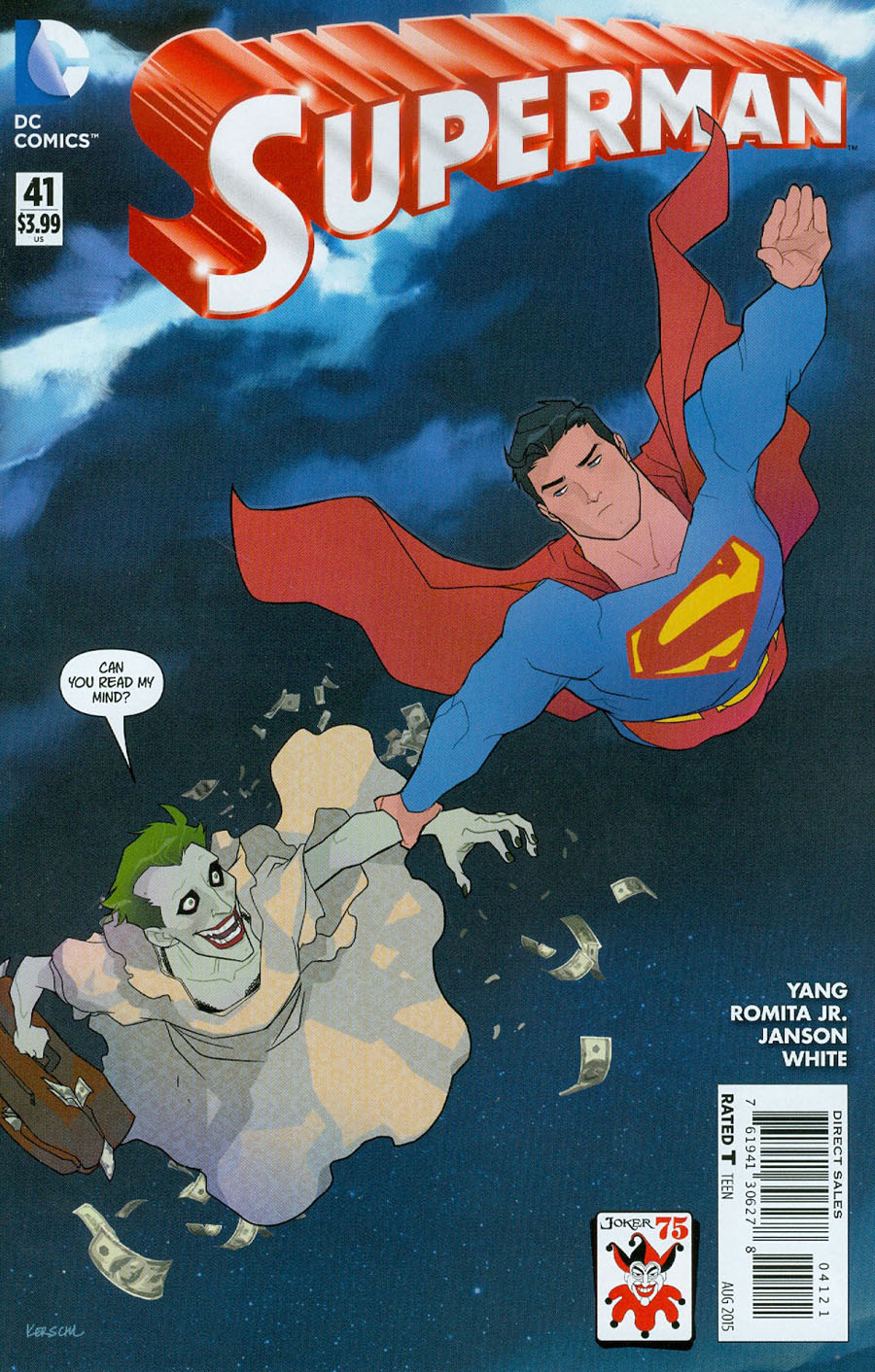 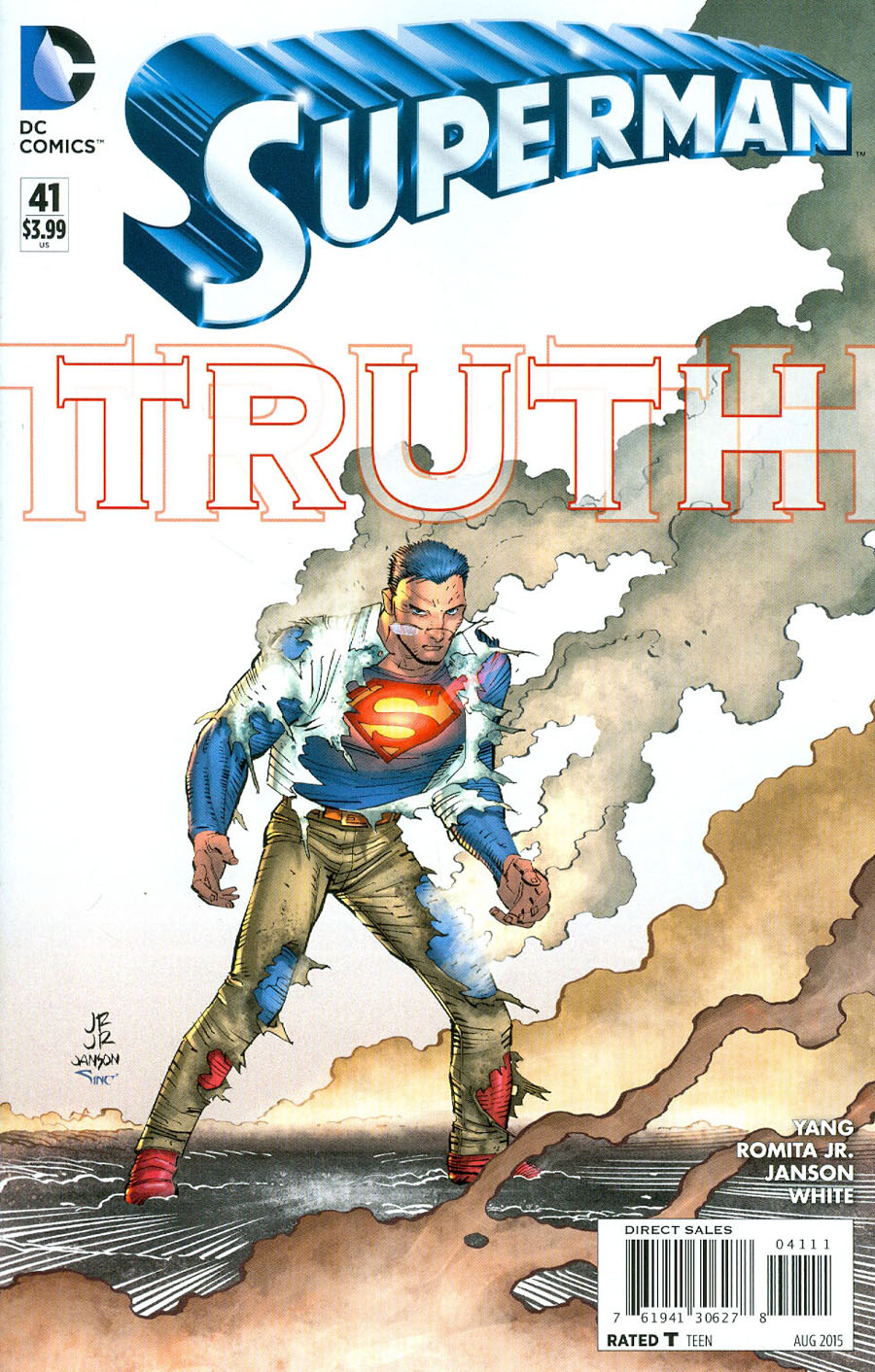 Superman sits against the tail of an aircraft. Smiling.

Clark is finishing up emails in the newsroom while an impatient Jimmy waits for him to end his shift.

An unknown contact text pings Clark's cellphone and instructs him to turn on the TV to CNN.

A news flash tells of how technologically advanced weapons are being sold to street gangs from an unknown source. The unknown contact purports to knowing the unknown source and tells Clark to follow his instructions for a scoop.

Soon, Clark and Jimmy, armed with their iPhones arrive in a warehouse in Technology park to report on 'the story of the year'. What they discover is a foreign military general discussing made to order weapons manufactured by 3D printers, so advanced they can print a super tank.

While they ponder the identity of the dealer, Jimmy mocks Clark for not having a covert outfit for sneaking around, especially as he, a cub photographer has one for just such occasions. They aren't covert enough as a gunman discovers their hiding place. Clark instinctively grabs the 3D laser gun and crushes it, instructing Jimmy to run. Jimmy races around in the dark until he is ambushed by a group of thugs with 3D printed guns, cue Superman crushing them to a pulp.

The dealer orders the thugs and the foreign general to evacuate immediately. Before leaving the dealer activates the giant 3D printer to launch the super tank which promptly crashes through the wall and attacks Superman.

Superman dodges attacks from the tank, grabs Jimmy and an injured thug, flying through a ceiling vent. The tank attacks again before Superman can help them to a hospital and before he knows it his heat vision overloads again triggering a solar flare.

Training with the Justice League before their drinking night taught him to shrink down the radial blast of his Solar Flare so that it doesn't incinerate everything in a 5 mile radius and means he isn't powerless for as long anymore. Luckily that means they can race to the Daily Planet in time to file their story for the morning edition.

They find Lois arriving to investigate the same story as they put the pieces together. Lois investigates the explosion in Technology Park and the boys with the cause. Lois forces her way into their investigation and sees that Superman was in the scene but her meddling reveals the identity of the dealer, the new state senator, Leland Norvell. Lois dominates the story and instructs Clark and Jimmy to file with Perry. Jimmy is exacerbated, as Lois wasn't even on the scene but the story sees print with perhaps the longest headline in the Planet's history.

Perry, Lois, Clark and Jimmy celebrate Norvell's arrest with Clark's favorite root beer, reluctantly agreeing to a night out with Perry later with real ale. Clark's cellphone buzzes again, this time the unknown caller instructs him to turn over a woman with blue dreadlocks who will visit the newsroom whom he deems sick in the head. Clark demands an identity of the caller or he will sever contact, to which the caller reveals the link to a secret web blog that completely obliterated Superman's secret identity. It will remain a secret as long as Clark follows orders.

Clark confronts Jimmy and asks him if he even accidentally revealed his identity to anyone. Jimmy swears he hasn't and Clark realizes that his addiction to flaring has made him slower. As his addiction took hold Clark was becoming slower and perhaps slow enough that a camera could snatch an image where he was previously just a red/blue blur. As Clark ponders the consequences of being an addict, the woman that the unknown caller had forewarned him about arrives. Despite her asking for Clark, Lois of course intercepts and is already grilling the woman as Clark arrives to protest. The woman promises to reveal more on the Norvell story but as she does authorities arrive to arrest her. Lois tries to help her escape but Clark stops them pointing out they know nothing about the woman. Lois accuses Clark of being a coward and they watch as the woman, Ada 'Condesa' Amoragujeta is led away into a black van.

Clark texts the unknown caller, telling him Condesa has been arrested and their deal is done, but of course the caller points out this is just the beginning of Clark in his service.

Angrily, Clark slips away into a Daredevil-esque all in one black suit and red ruby sunglasses and intercepts the van as it passes under a bridge. Inside Condesa realizes the men in black aren't really FBI agents and that she is probably going to die. Enter Covert Clark who fights off the men and grabs Condesa from the fast moving van, skidding along the street as the van crashes into parked cars.

In an alley Jimmy, is waiting for Clark and Condesa as Lois sneaks into the car and reveals she knows, Clark and Jimmy are up to no good. Enter Clark, bleeding from the attack, Condesa, who reveals that Norvell is just entry level in a bigger scheme only to meet a hysterical Jimmy and a snarky Lois.

Before any of them can react to one another the fake FBI agents shower their car in bullets and they race as fast as they can to safety.

Story - 3: The burning question is why 'Truth' started mid story, it honestly has ruined the strength of the story by grandstanding the changes made for no apparent reason, polarizing fans deliberately with an eye for sales rather than story. Why this issue didn't kick the arc off I have no idea. There is enough intrigue to keep you hooked, a lead in for a new starter, some decent characterization and dialogue. This is despite the fact Lois was wildly unprofessional and a meddling, annoying witch. The 3D printing was laughable of course, as was, even in haste, the use of cellphones when superior compact cameras exist and yes I spotted that the Daily Planet - formerly The Planet Global Network the most advanced media outlet on Earth (when the New 52 began) is using USB VGA webcams. Also - Superman who is just about above human power levels is not completely crushed sitting against a planes tail wing? Perhaps I'm being finicky here?

Let's just go with the story, there isn't too much to be honest, a homage to the fact this team likes the Daredevil TV show is evident in spades and the Intergang-esque retread of super weapons sold to criminals (that we've seen a gazillion times) but that isn't to say it isn't interesting, not enjoyable, but interesting. This is mainly because the story has flashed forward already so this is a look back and again gives a bittersweet feel.

It is interesting that Geoff Johns' Super Flare has been retconned to an allegory to drug addiction. The slip to the rush and high is always there, but now with one session of training in the JLA satellite this wildly uncontrollable power (that makes Clark feel alive - He can drink! He can party! He can be reckless!) is firmly under control - until the next slip, which almost kills Jimmy during the fight (but Clark is in control of course) and has led to him being reckless with his identity (which he initially blames on Jimmy before realizing his lust for the Super Flare was the cause for the blackmail). I'm not liking this Clark right now.

Lois may be playing up the intrusive angle a bit but since someone else is threatening to reveal Clark's identity, perhaps there is more to her doing what she does later than we know and has been assumed? (Just throwing that out there as I usually love Lois).

This issue is ropey, that isn't Yang's fault, Superman was broken the moment he steroided up and started stealing motorcycles from dead friends and flight fares from airlines. This issue is the beginning leading to that end.

It's like when a TV station announces that the current season of a show will be its last just as it begins - we know where this is going, the question is, the current team have been so preoccupied with what they could do to alter Superman, they never thought of the people they are writing for, the Superman audience, they honestly seem to have neglected to think if they should be doing this story.

This issue isn't terrible, but the fact it's the lead in to the endgame means it has to live up to the devastation that has been unfolding in parts 2,3,4 & 5 and so far it hasn't. I DO however look forward to Yang's next issue and that might perplex many. The deck was already dealt, Yang, Pak, Hitch, etc. have to play their hand. I'll be waiting.

Art - 2: The artwork is slowly... slipping. It has been up and down through JR Jr's run but instead of finding the footing I'd hoped, it seems to be descending into the doldrums.

Jimmy is a man. A young man, granted, but he's a man, just an FYI to anyone confused. It's also odd, and I thought it was Kuder's interpretation of Clark but, in this issue on the first page Superman looks physically more defined when sitting on the plane than 'earlier' when he's Super. Consistency please? Please, if we can't have it in the writing, at least make the art so.

Cover Art - 1: A physically feebly looking Clark is unmasked... again - consistency please or does Clark immediately enroll on the Insanity infomercial workout after this?

Joker Variant Cover Art - 5: Hands down the best part of the issue. A brilliant send up and always good to see Kerschl's work on a Super book.