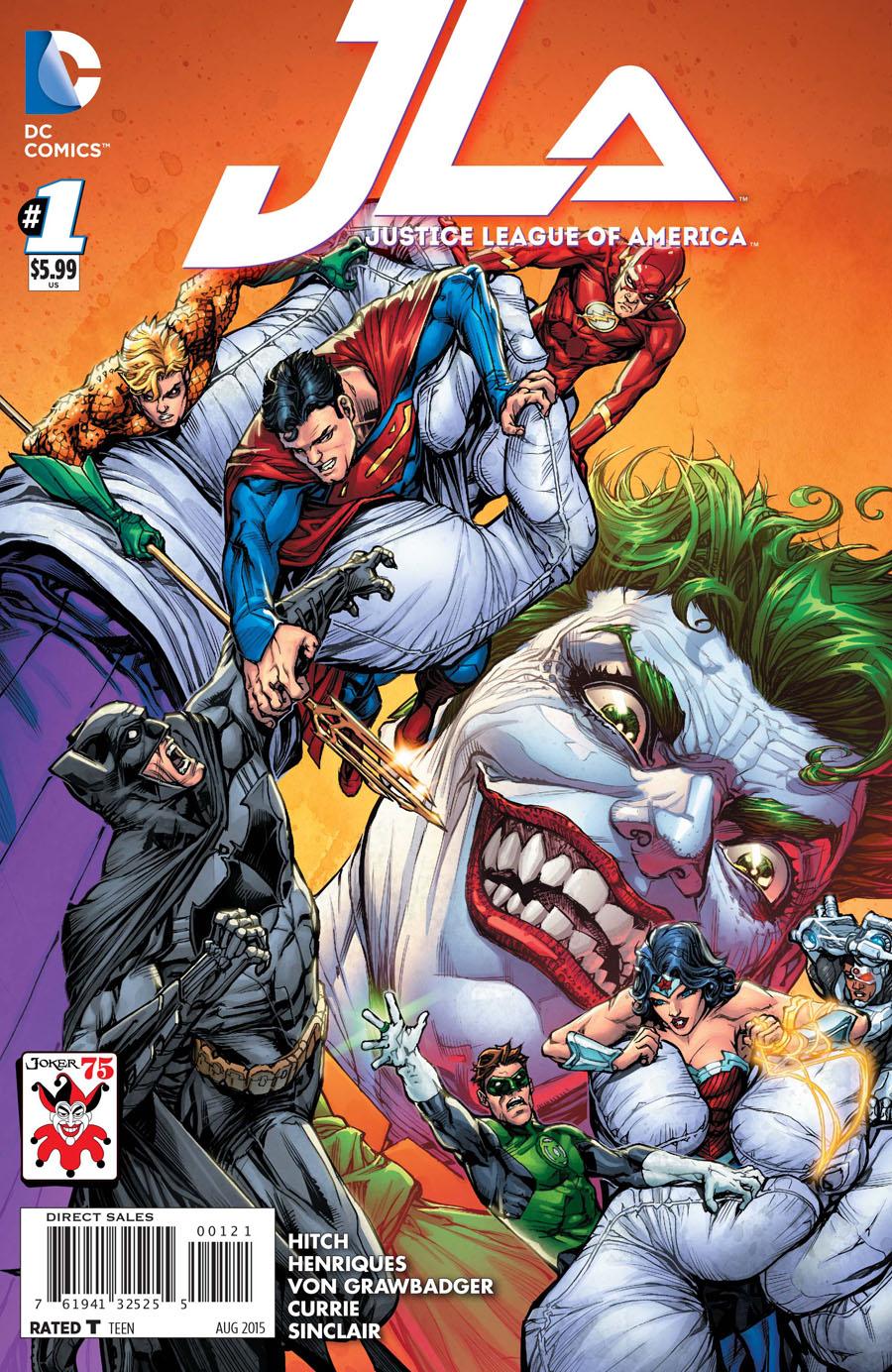 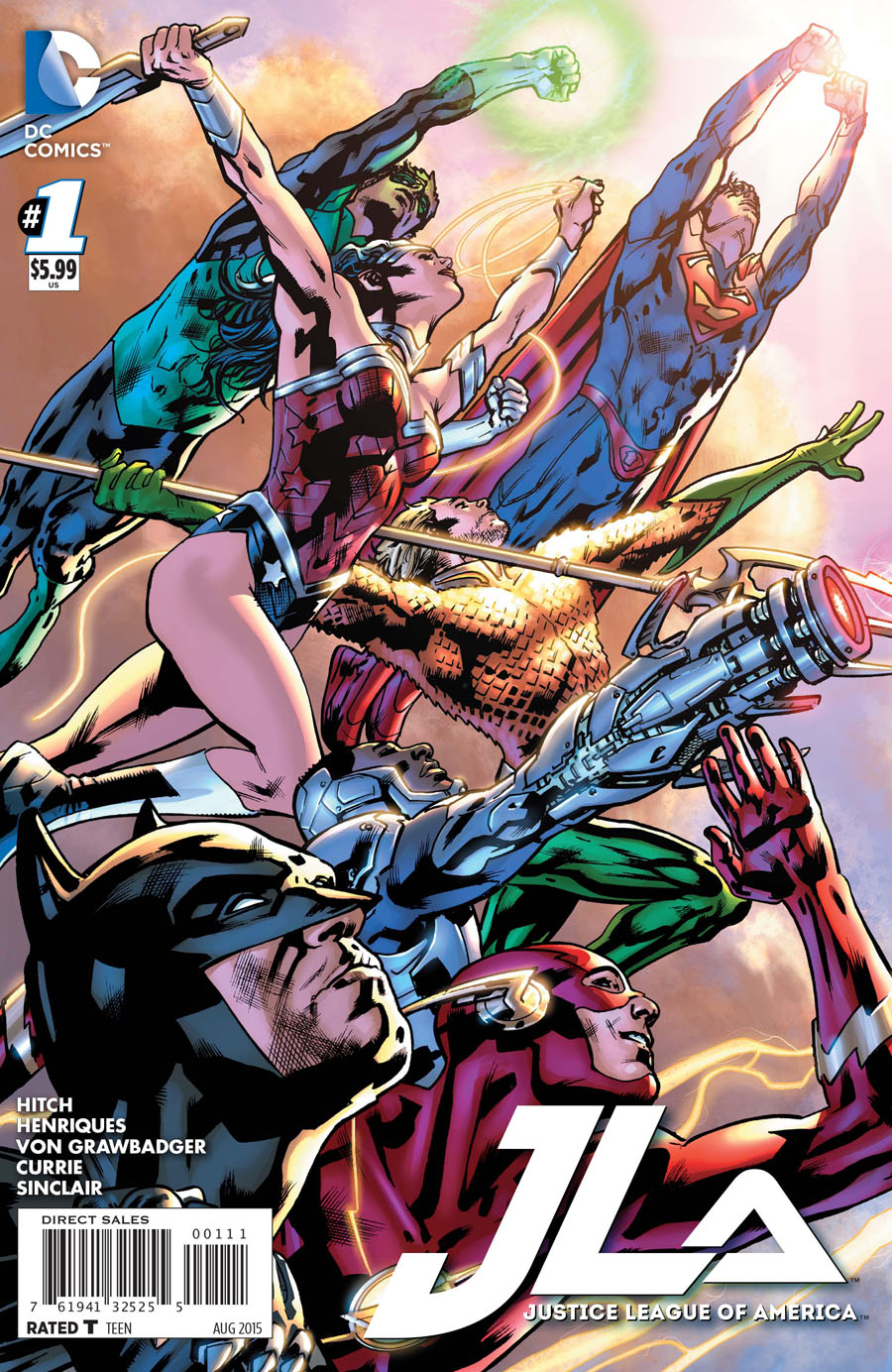 "Power and Glory" - Part One 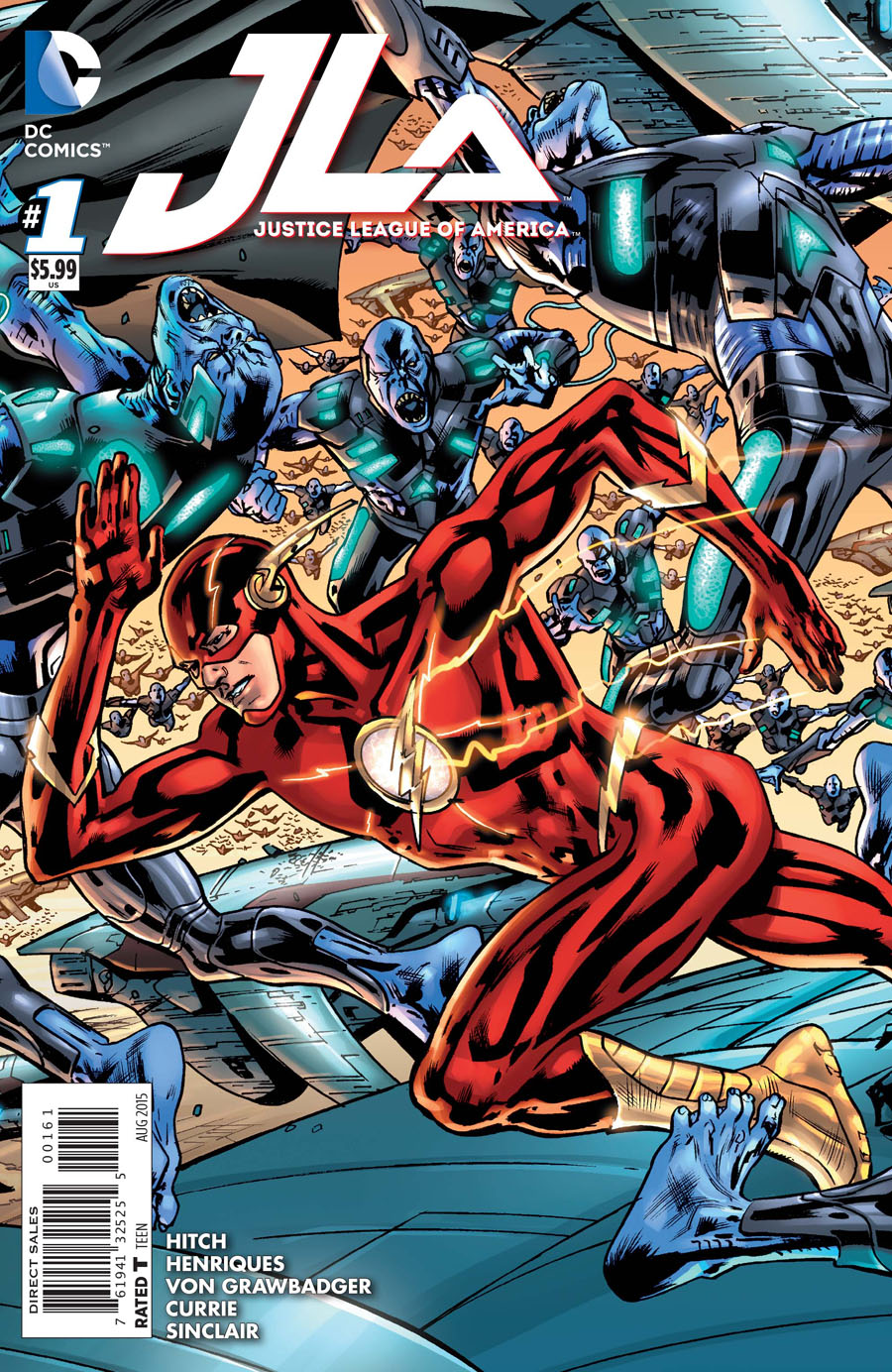 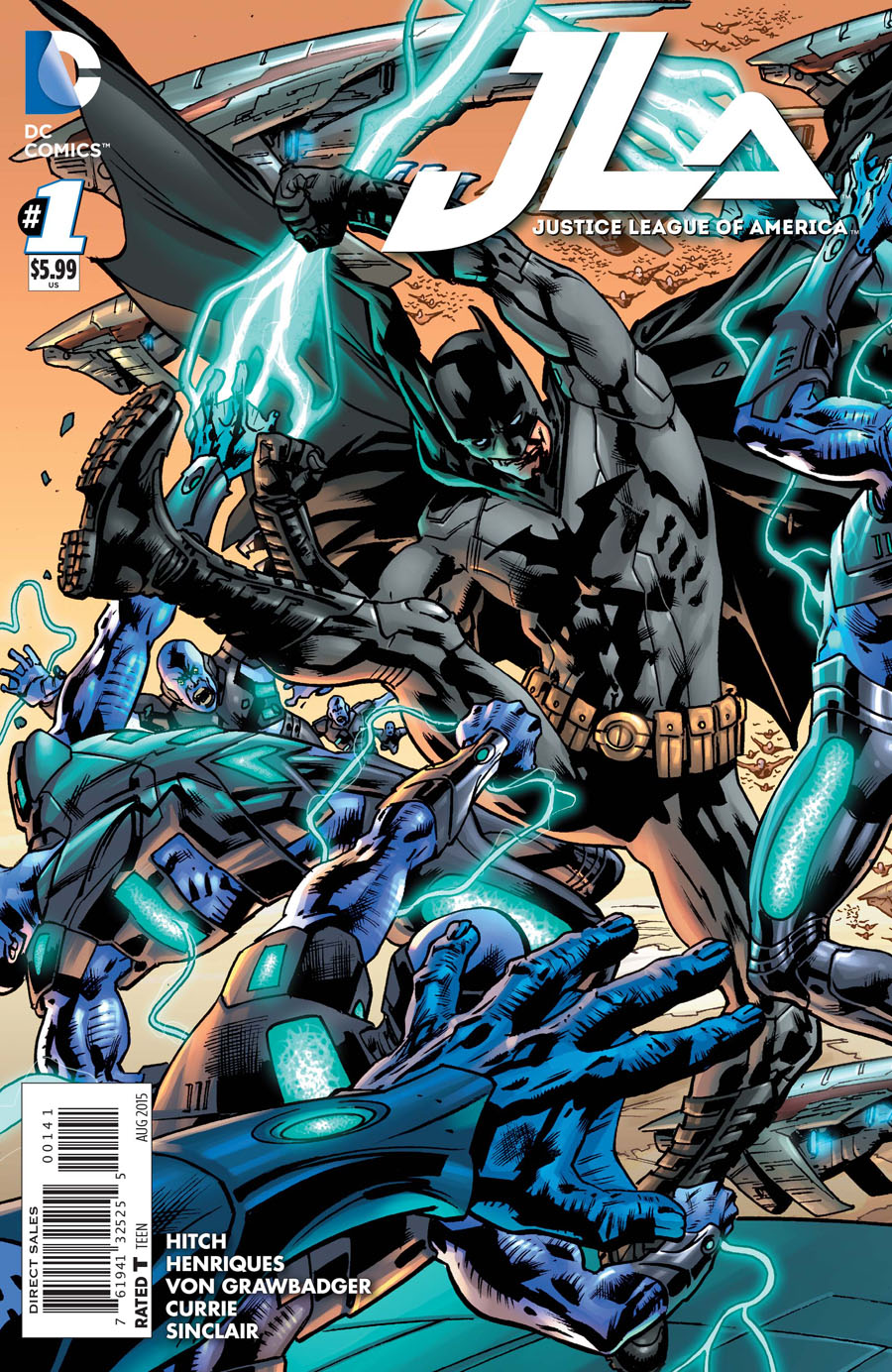 Superman is on his knees amidst the wreckage of a destroyed city. His uniform torn, he is bleeding. He blames an unseen force for the carnage. A booming voice responds, "It's too late. It's all too late."

An earth-shattering explosion breaks off chunks of the earth's crust, akin to the destruction of Krypton. Unconscious, Superman is hurled into space.

Multi-colored lights appear in the abyss. Superman is swallowed whole.

Clark Kent walks into the Daily Planet. He is invited to an event at the Infinity Corporation in New York City.

Lois, somewhat tongue-in-cheek, assumes he will take her along. Clark notes the lack of a 'plus one' on the card. He has to 'fly' if he is going to make it to New York in time.

The MAW, or Metropolis' Super Max Prison, houses the region's most dangerous meta-humans. A person, by the name of Jones, masquerades as a security guard. He uses mind-controlling powers to steal a casket-like cart. Loading it onto a helicopter, he flies off.

Superman flies to New York City's Infinity Corporation. They have hidden the crest of the House El under a lead foil in the invitation. The secretive invite proves they know Superman's secret identity. 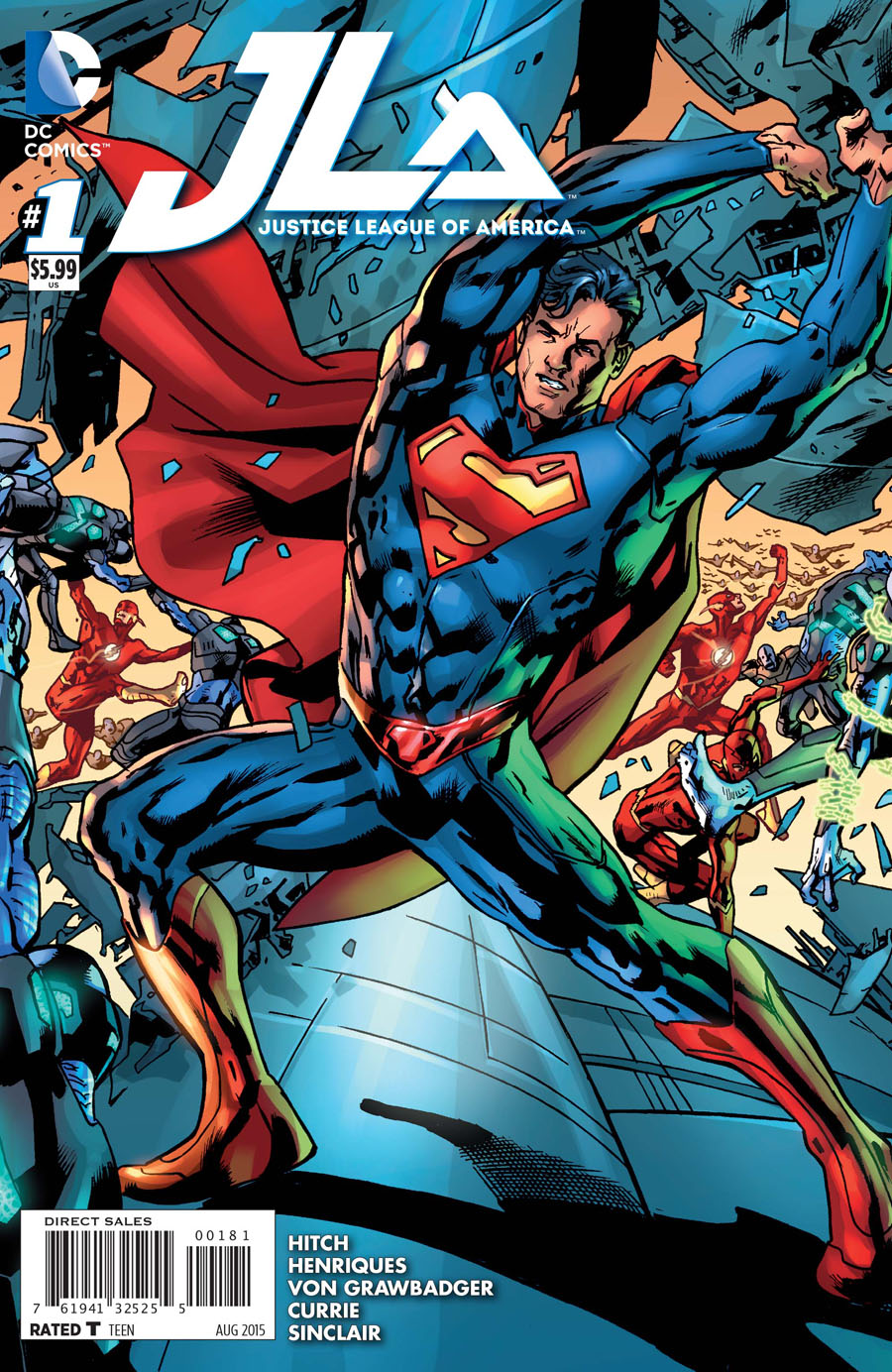 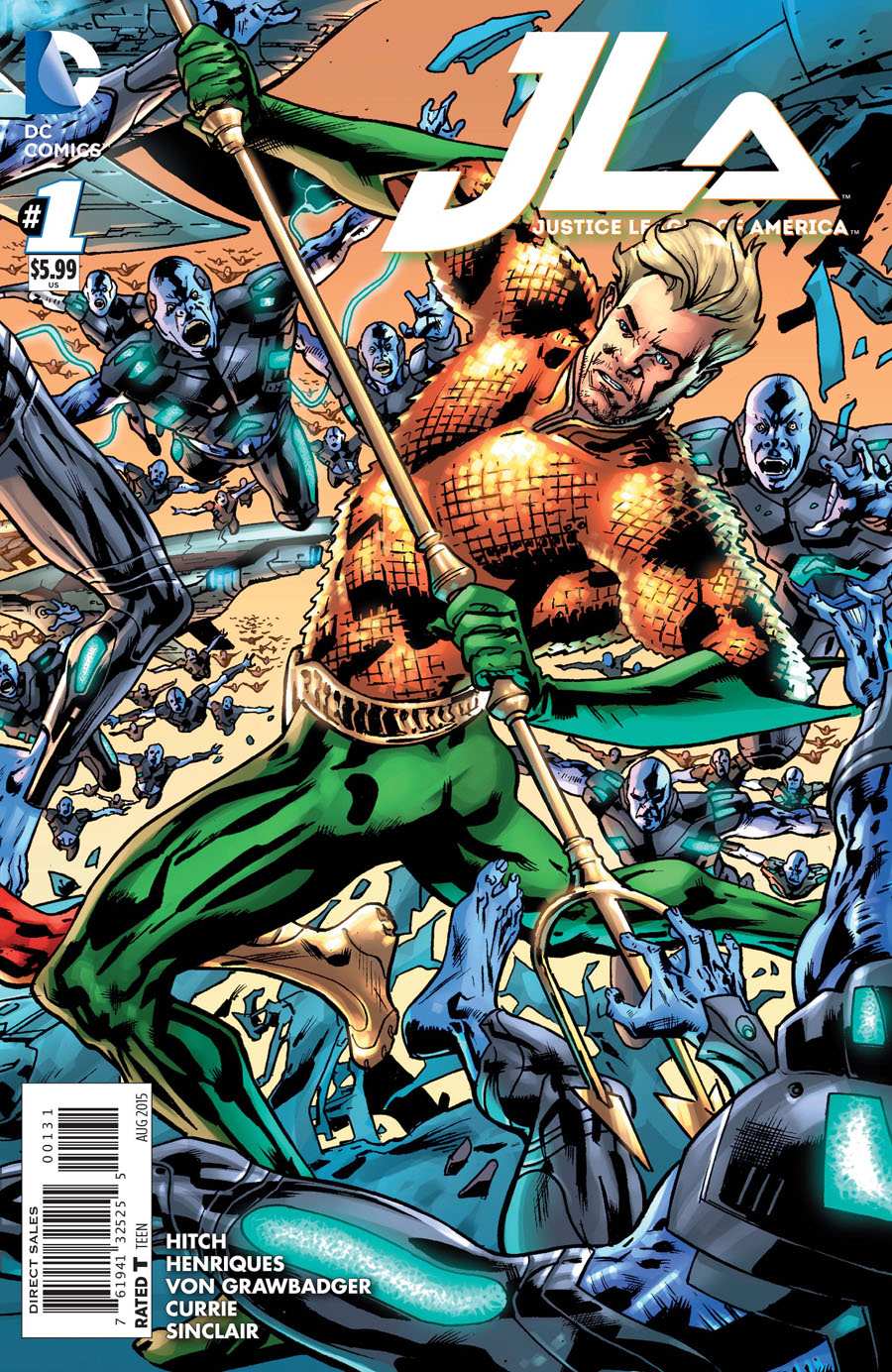 Superman is in for a shock. As he enters a laboratory, he sees dozens of dead Supermen. Identical bodies piled on top of each other. Bloodied, with torn costumes.

Before he can fully absorb the situation, Superman is told that 'another one' is coming through the portal.

Yet another battered Kryptonian is teleported into the room. Superman rushes to his side. He is alive, but barely. The embattled hero struggles to give Superman a warning with his last breath, "Don't trust him."

Upon realizing he has lost another Superman, the scientist operating the controls, throws a keyboard in frustration. This is the only Superman to teleport in alive. With this death, he has nothing to show for his work. Over sixty attempts.

Regaining his composure, the scientist introduces himself as Vincent, and says, "Welcome to The Infinity Corporation, Superman. We're trying to save your life."

The faux security guard delivers the stolen casket to a clean energy power plant in Metropolis.

At the United Nations, Aquaman addresses the assembly. The international community has proposed a trade agreement with Atlantis. Aquaman, representing the ocean-dwellers, declines. He explains, as a far more advanced society, there is nothing that Atlantis could want or need from the Western world. There is neither a reason for Atlantis to trade, nor a reason for the West to fear an attack.

Aquaman is called away. Someone, looking for Olympus, is waiting for him in at Atlantis. 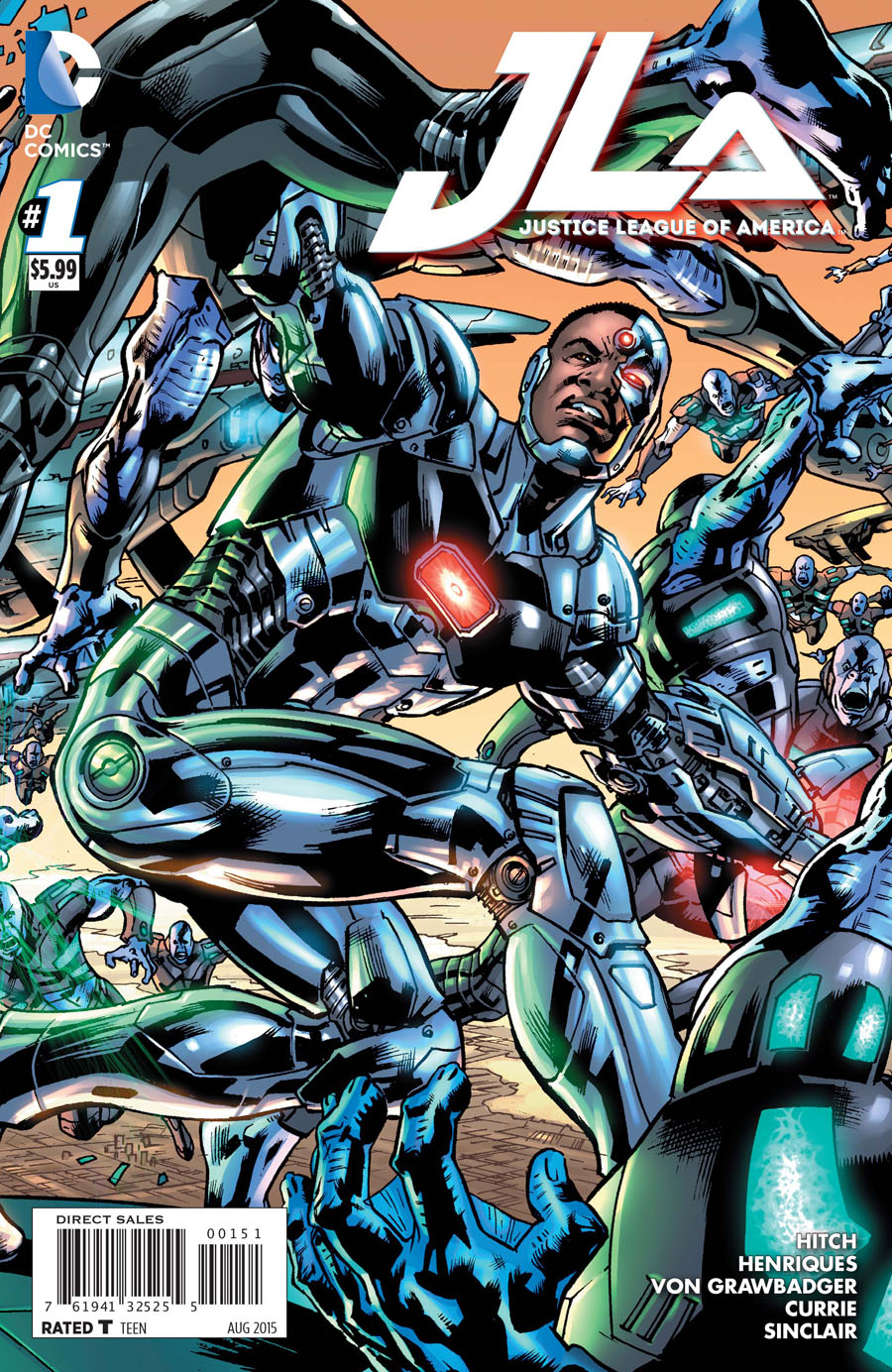 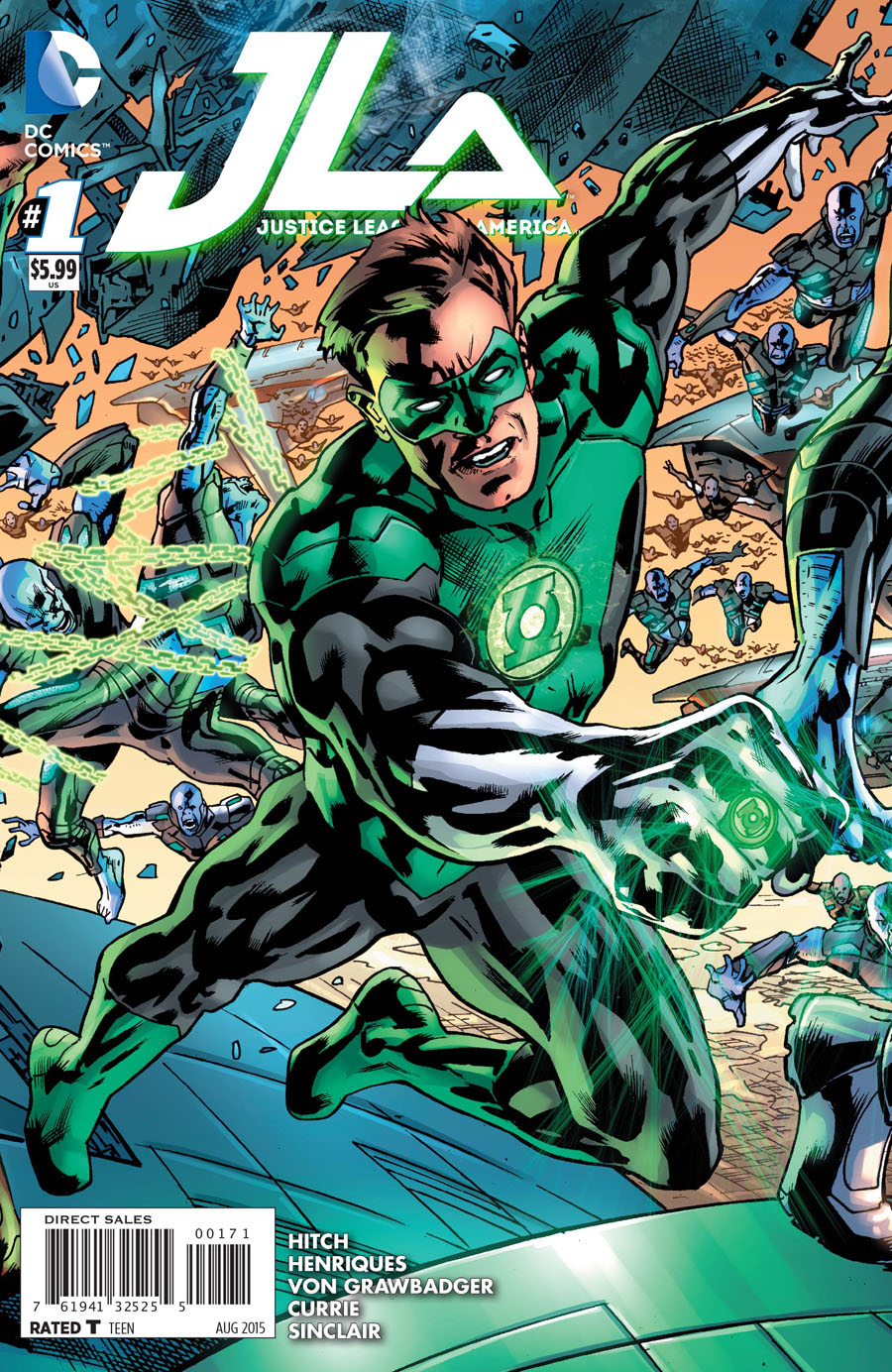 At Infinity Corp, Vincent tries to explain the situation to Superman. Something called the 'Stones of Forever' has brought him Supermen from different realities. These deaths are a harbinger of all of time being destroyed. Vincent does not know how or when Superman will die. But in his mind, if Superman survives this coming apocalypse, so too, will the world.

Green Lantern, Wonder Woman, The Flash, and Batman converge on Metropolis' power plant. They have all been given invitations similar to the one Superman received.

Back at Infinity Corp, Vincent alerts Superman to the power plant battle with Parasite. Superman races to the scene.

Parasite is so large, he swallows Wonder Woman whole. Superman shoots through Parasite's stomach like a bullet, rescuing the Amazonian. Hal hits the villain with a barrage of hard light constructs.

Aquaman returns to Atlantis. The unseen figure waiting, refers to himself as a prophet. He says the time for false gods is over. The true god is coming. 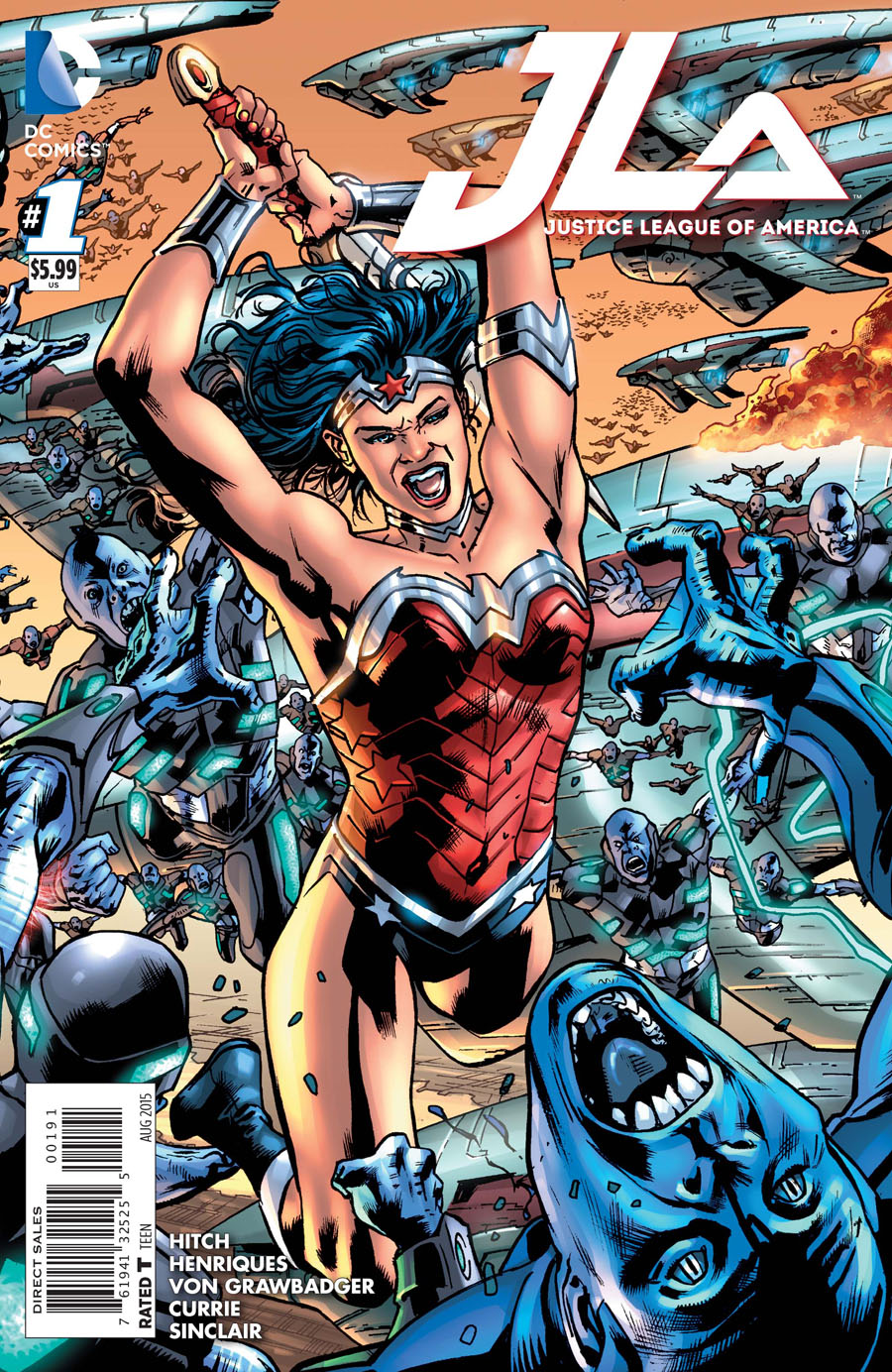 The security guard returns to his employer, Infinity Corp. He is now a she. A shapeshifter.

Cyborg teleports into the fray. The Flash races away to prevent Parasite from absorbing any more of the speedforce.

His power levels drained, Hal has been knocked unconscious. His ring responds by initiating an emergency evacuation procedure. A wormhole opens up and takes him, and accidentally, the Flash to OA.

Superman holds off Parasite while Batman and Cyborg operate the power plant. Supes sends his arch-enemy crashing into the complex. The techno-heroes have repurposed the plant, depleting the Parasite's energy instead of providing it.

Superman knows that the mysterious Infinity Corp is behind Parasite's attack. With Wonder Woman missing, Cyborg teleports the three remaining JLA members to the Infinity Corp address. But the building has disappeared.

A giant space ship hovers over New York. Descending down from the ship's lights, is Rao. The Kryptonian god himself.

Story - 4: Bryan Hitch's debut issue is a breath of fresh air. When I heard Hitch, an artist, was set to script the new series, I was skeptical. For every penciler turned successful scribe, there are a dozen artists who fail to make the transition. This story is not perfect, but Hitch's classic approach to the iconic heroes balances DC's current radical take in the main books.

A classic failing of scripts written by artists is a heavy focus on plot while completely disregarding character development. True to form, this script is plot heavy. We were promised 'wide screen action,' and we get it in spades. But instead of a tired fist-fight, Hitch shows an ability to handle heavy action and plot without weighting the story down.

The opening salvo, in this Superman-centric arc, is anything but predictable. We are treated to a mysterious organization, a cosmic entity known as the Forever Stones, and an appearance from the Kryptonian god Rao. Add in neat wrinkles like emergency teleportation to OA, Flash's call to Superman for help as he runs around the world, and sixty dead Supermen, and you get pages that practically turn themselves.

Hitch is not what I would call a 'master of dialogue.' Nor did he pace this issue perfectly, but his work is not only a pleasant surprise, but an effort, well above-average.

The most impressive is how well Hitch handles the heroes. The story is plot-centric and the character work is not particularly deep. But it is clear that the writer understands the protagonists he is writing. All of the characters are different and accurately portrayed. The best part is Daily Planet scene.

Like a lighthouse in a storm, shining a beacon of light to ships lost at sea, the simple scene sets an example for other Superman books. Lois and Clark are together in the bullpen. It is only two pages, but we get to enjoy them, as they get to enjoy each other's company, if only for a moment.

Lets see if DC will be smart enough to continue to 'have their cake and eat it too,' in this, their first attempt at 'continuity is no longer king.'

Aquaman's appearance at the UN, and later Atlantis, is also short but effective. It shows who Arthur is as a character and king. For my money, a few pages could have been cut from the Parasite fight and added here.

Also of note, there is a shape-shifting telepath named Jones. Is this, perhaps, Hitch's way of including everyone from the classic line-up without breaking DC's mandate to exchange Martian Manhunter for Cyborg? If so, nice touch.

Ultimately, what works in Hitch's favor more than anything, is either, his lack of experience as a writer, or his appreciation for the characters themselves. He does not try to change the heroes to fit his strengths or style. He does not modify the protagonists to fit pop culture's current sense of 'coolness' or appeal. He respects the histories and personalities that have made these characters the iconic and popular heroes they are today.

Art - 5: Bryan Hitch is well known for smooth, well rendered pencils. His move to DC is a boon for the company. I have written about the potential pitfalls of a writer-artist, but there are inherent benefits as well.

A writer pencilling his own scripts allows a creator to tell a story with the dynamism and energy that the medium deserves. Hitch is not encumbered by a writer who is enamored with his own words or internal character motivations. Therefore, we get the wide-screen big budget action flick we are promised.

The best part about his art, is his ability to let the pictures entertain, and in places, tell the story. During the Daily Planet scene, Clark uses his X-ray vision to examine the invitation. Though it happens over two different panels, it is easy to miss. Hitch does not draw attention to it with dialogue or captions. He rewards readers for slowing down and taking each panel in. Those who rush through, or only focus on the words can blow right by it. If a reader misses it, they will not realize that Clark spots something noteworthy about the invitation. It pays off in the next scene when we see that, though the note is sent to Clark, it is meant for the Man of Steel. And someone knows his secret identity.

Whether the scene is filled with dialogue or chalked full of action, each page catches the eye with movement and expression. From Superman drifting in space, to Parasite crashing through the power plant ceiling, to Rao descending from the heavens, each character is given great 'splashy' shots and moments, without taking up too much room.

Cover Art - 4: Hitch did not overthink his main cover, or seven variants. The main cover is a group shot. Whereas the variants treat each hero individually. (They take on invading aliens, that have nothing to do with the story.)

For the main cover, the heroes race upward toward the light. No dark or gritty display here. Though Batman is in the foreground, only his head can be seen. Perhaps I am reading into the cover too much. But I think it is a further indication that Hitch has no desire to lean on Batman's 'cool factor' or look to the same tropes that Justice League writers have for so long now.

The bottom of the shot is crowded. The arrangement is nothing we haven't seen many times before. Hitch seems to be saving his 'real' debut cover for the seven variants. It will be nice to see them all linked together.