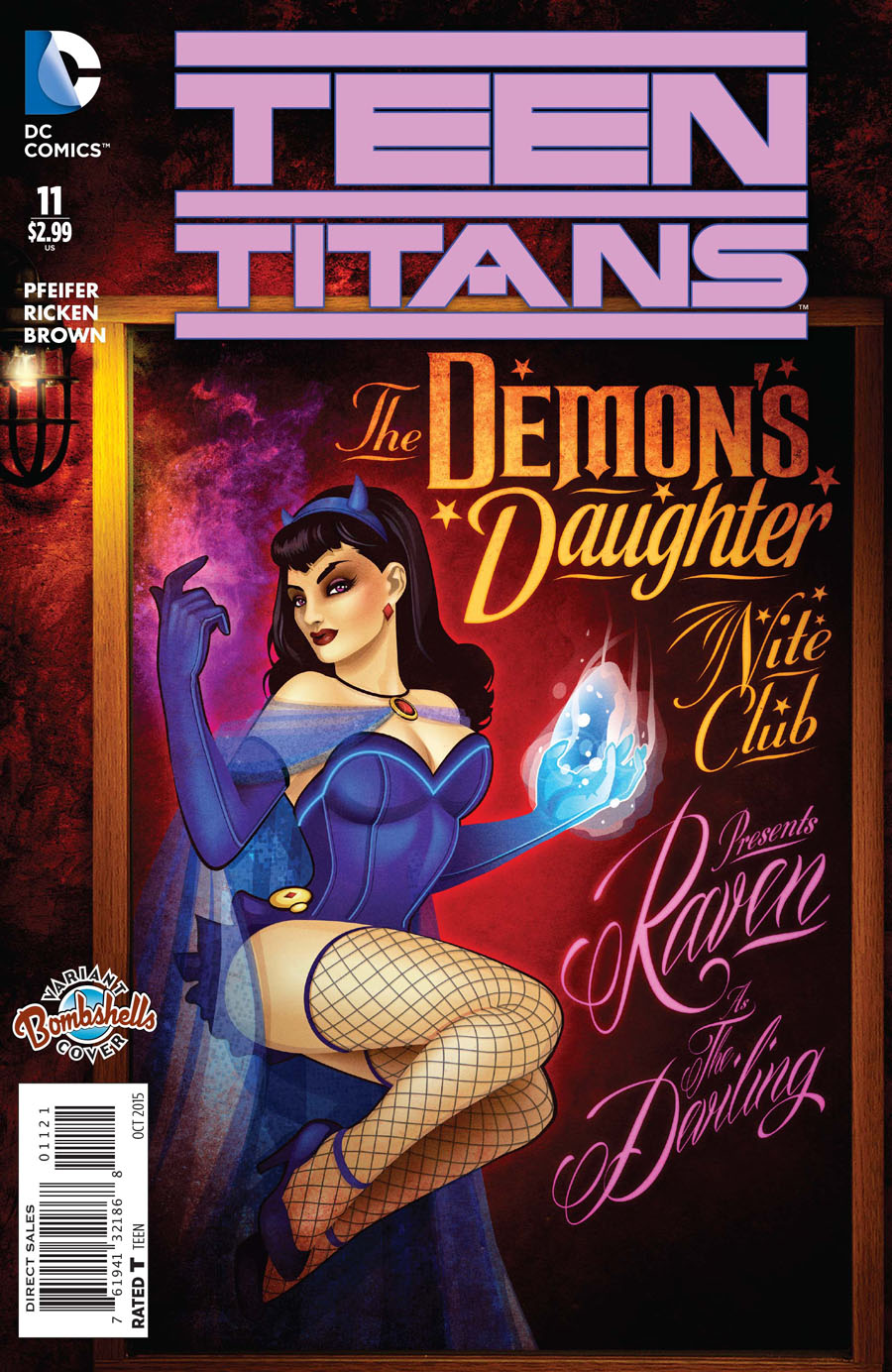 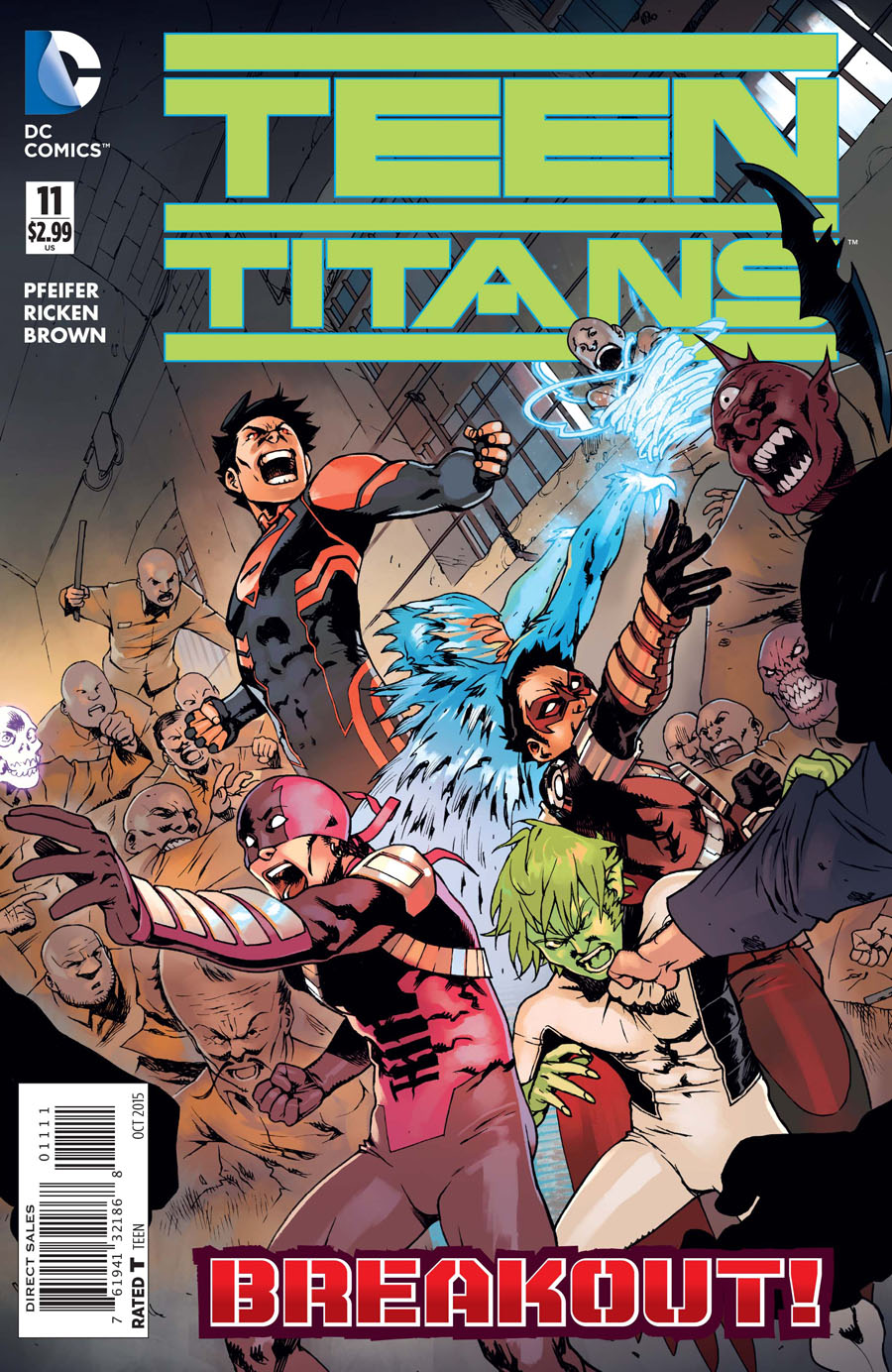 Click to enlarge
We start with Robin holding an unconscious Raven in his arms, in Manchester Black's penthouse apartment. Manchester Black gloats and shows Robin on his smart phone, news reports of the chaos in Chicago that was caused by the Teen Titan's battle with his Elite.

Robin flees the apartment, with Raven in his arms, and glides away, with Manchester Black looking on and remembering that Robin has "wings".

Manchester Black tells the Elite not to worry about following the two escaping Titans, as he knows exactly where they are going!

Later Robin talks with the rest of the Titans in a secluded hideaway. They discuss what Raven saw in her vision, and decide that they now must break into the High Security Prison (The M.A.W), in order to find out what the connection may be between raven's vision and clearing Superboy's name (who has supposedly gone into hiding himself, after last issue's events). Robin tells the team, that they shouldn't feel obligated to go on this mission, because of the impeding danger. The Titans all reassure him, that they are all in!

The next day, the Titans begin their plan to break into the M.A.W. Beast Boy breaks into the security room, and starts to input a code that Robin supplied to him in order to gain access to the high security wings. Meanwhile Robin, along with the other Titans in a sub-basement somewhere in the facility, ask a very tired and drained and barely conscious Raven, which prisoner it is that they need to go after. Raven tells them that they need to go after Despero! Chimera asks who Despero is, and Robin begins to explain to the rest of the team about his backstory.

While this is going on, Beast Boy explains that something has gone wrong, and all the prisoners have been let loose.

At that exact moment, Guardian of the Elite tells Manchester Black that there is a bulletin coming from The M.A.W.

Manchester says to him he already knows, as if he had something to do with it.

Meanwhile at The M.A.W, Robin exits the room he is in, in order to go and find Despero, and is attacked by Blockbuster, who mistakes him for what seems to be Nightwing. Bunker, who is under instructions to protect Raven, allows Chimera to copy his powers, who goes up against Livewire and beats her, and Blockbuster next, freeing Robin up from his opponent.

The two Titans head down to where they are keeping Despero, when The M.A.W is struck by something powerful.

Robin and Chimera then see what crash landed into The M.A.W, only to discover that it was Superboy!

Story - 2: Just like last month, I realized whilst writing the synopsis, there wasn't much "meat" to this story!

This was a filler story, which could have been told in 5 pages. But sadly with today's storytelling trends in comics, everything must be decompressed to the point that it resembles an episode of Dragon Ball Z. I apologize to any DBZ fans that read this review, but it was the DBZ was the only other property I know that was so very much decompressed in its storytelling.

I really have nothing much to say, aside from the fact that this storyline seems to be going downhill fast. I don't really have a vested interest in this Manchester Black/Elite tale anymore, because I don't see the payoff anymore!

Manchester is clearly up to something, and has a hidden agenda, but so far it's been pretty lackluster, so I'm not expecting anything fantastic to happen.

The appearance of Superboy at the end of the issue was a surprise though, but then again, I have a feeling it may not be the real Superboy, or Superboy under somebody's influence. And wasn't enough to push the excitement meter to high.

Will Pfeifer is a much better writer than what he is giving us here. So there could be editorial interference, but that's all speculation.

I feel bad, but I really have nothing better, or else to say about this issue.

I don't want to be that guy that compares this book to the Teen Titans title of yesteryear, but being a big Titans fan, I'm sadly left unsatisfied. And I can't see how any newer readers can become die-hard fans like I/we did when we first discovered the Teen Titans. There just isn't a sense of family to this book, nor is there any joy! I wish they would put out a "filler" issue, where we see the Titans just hanging out, and discover how deep their relationships are with one another.

Art - 3: So the art hasn't been as great since Kenneth Rocafort left the book. And I wondered to myself, if I only enjoyed this book so much because Rocafort was on the art duties... I really hope not, as I am a big Titans fan, and really want to like this book.

It seems that Ricken is the new on-going artist. And I'm not sure how I feel about that.

Ricken's art is very Manga especially influenced in his rendition of facials, but his facials seem devoid of a lot of emotion. On page one, the top panel and bottom panel, both featuring Robin, look as if they could have just been cut and pasted. Robin's facials look exactly the same and totally emotionless. I know he is meant to be angry, but his features don't seem as 'animated" with raw emotion like they should.

There doesn't seem to be anything dynamic about it, and I hate to say that about any artist and his work, but sadly Ricken's first issue really didn't do much for me. I really do hope that he gets better as the time goes on, because he does seem to be capable of dynamic storytelling.

I did enjoy the last page, with Superboy's appearance. That page and his pose were pretty awesome. So much so, that it gave me hope for Ricken's art for future issues.

Cover Art - 3: This cover depicts all the Titans fighting the inmates of The M.A.W, which didn't really happen, but close enough. The art of the cover was slightly better than what was inside. But just barely.

Variant Cover - 3: The DC Bombshells cover is pretty neat, but it focuses on Raven... A character that spent 99% of the issue barely conscious.