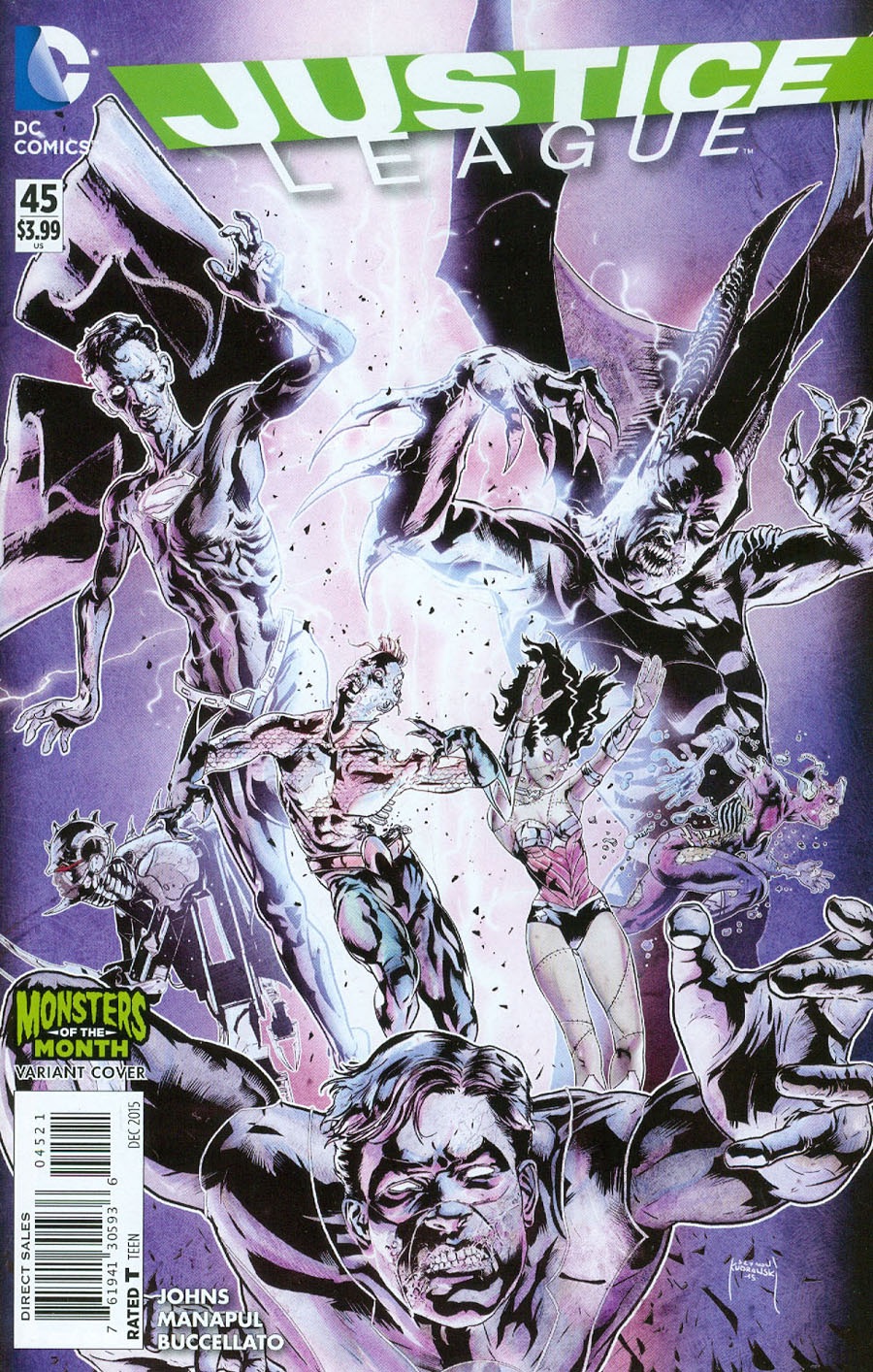 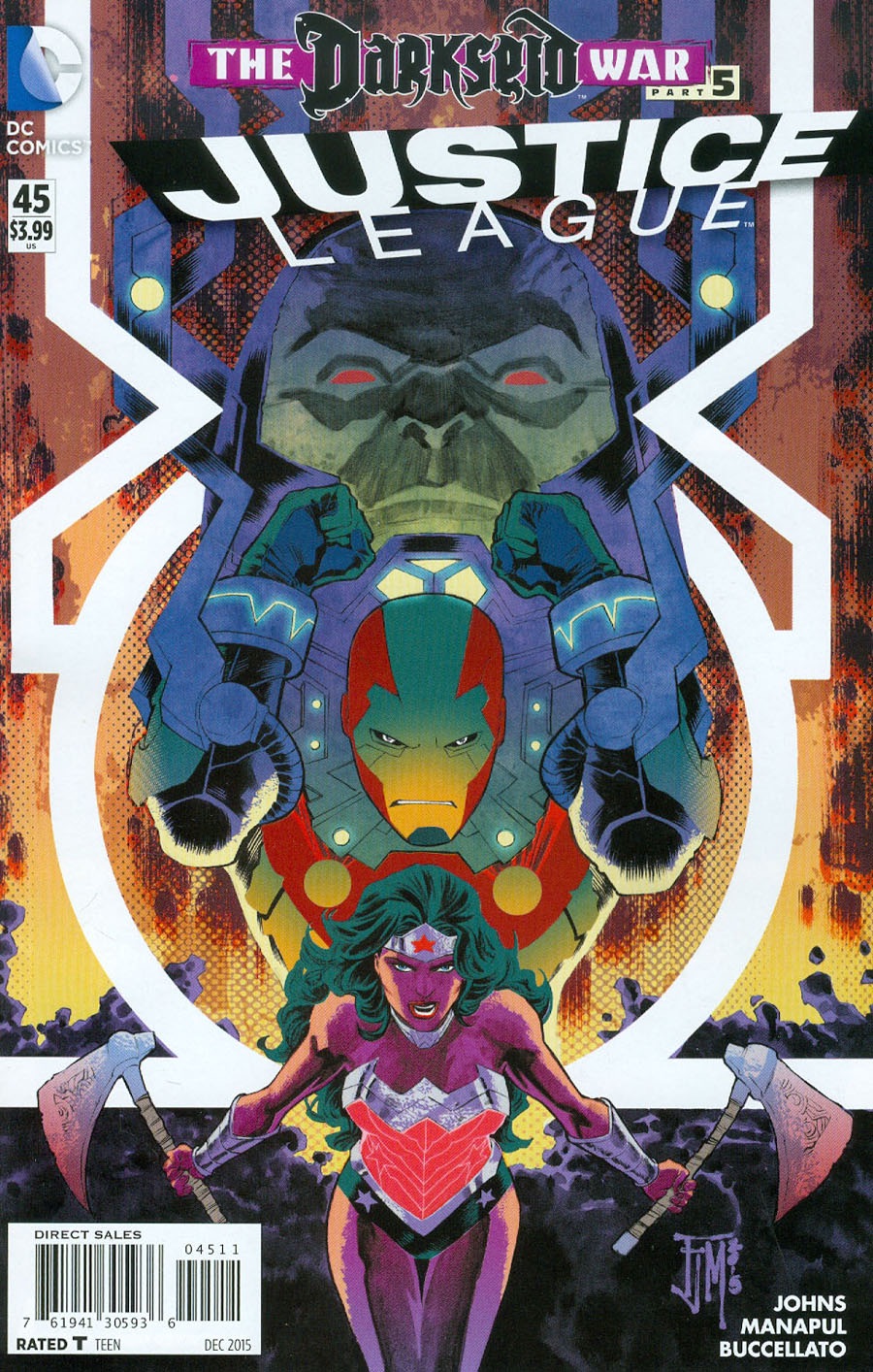 Click to enlarge
Darkseid is dead. Mister Miracle confirms this with his Mother Box, and the Justice League confers as to what Darkseid's death means for the current situation. The Flash, now the avatar of the Black Racer, on being informed that he is permanently bonded to the personification of death, states that he wants to control death, not be free of it. On Apokolips, Superman consigns Lex Luthor what fate awaits him on the leader-less planet, but Luthor is found by Apokoliptans who imbue him with great power. Batman and Green Lantern part ways, once Batman informs Lantern that with a master, the paradaemons now seek the greatest light in the universe: Oa. Shazam is beset by the voices of the New Gods, and flies off to parts unknown, leaving the rest of the League to contend with what remains of Darkseid's forces. All this occurs while the Anti-Monitor is transforming into what Grail says is "Mobius".

Story - 3: It's a shame that what started with such vim, has become commonplace padding. Due to Johns' need to break-up his ensemble, sparse character moments are strung together in place of what should be a top story called, "The Darkseid War," instead, what's been submitted for approval is "When Are Born the New Gods." What was trumpeted as a major confrontation between some of the most prominent forces in the universe, has been submerged in bathos, and well before the second act that this installment is labelled to begin. The ultimate qualifier is the caption on close of the issue, that alerts the reader to the other books that obviously have to be consumed in order to have the complete story. One must read of Batman, Shazam, and the rest in tie-in titles, or return to the main story uncertain of what has been missed. The Darkseid War is obviously too big for a monthly story, as its quality has dropped since its opening, which allowed a page count that enabled a stronger, more detailed story, but it also seems too big of a tale for Johns, who has attempted it without the area necessary to flourish.

If you look at the line-up for the League, and add the addition of Scott Free, it's pretty obvious that all of the players aren't needed to tell this tale. The most glaring example is Shazam, though Cyborg and Wonder Woman are close behind. Shazam alerts us that he's nowhere near as fast as the Flash (Really? Captain Marvel was faster), and as he's not as strong and powerful as Superman, why is he on the team? Neither he nor Cyborg serve any purpose whatsoever. He's a strongman who can fly and is nigh invulnerable, the generic power-set stolen from Superman for just about every hero since he appeared on the scene. Shazam actually gets one of the spin-off titles, which is surprising as he's done little to deserve any attention since his vacuous mini-series within Justice League concluded. Subtract Shazam, Cyborg, Power Ring, and Wonder Woman, then Johns would have less cast and the room to tell a stronger story. It may still not meet the muster, but it's more likely he'd perform better. Even with large stories such as The Sinestro Wars, which had a significantly large cast, Johns' had a core group of characters to focus the story about. The same for Superman and the Legion of Superheroes. The Darkseid War is overweighted with characters, which, ironically, thins the plot like bread with too little jam. What's bread with no jam? The Darkseid War.

Art - 3: Fabok's absence is glaring, as his pretty pictures make what little occurs palatable, if not acceptable. Manapul delivers a competent book, but that's about it.

Cover Art - 2: It's a nice exercise in symmetry, but not very appealing outside of Art 101.