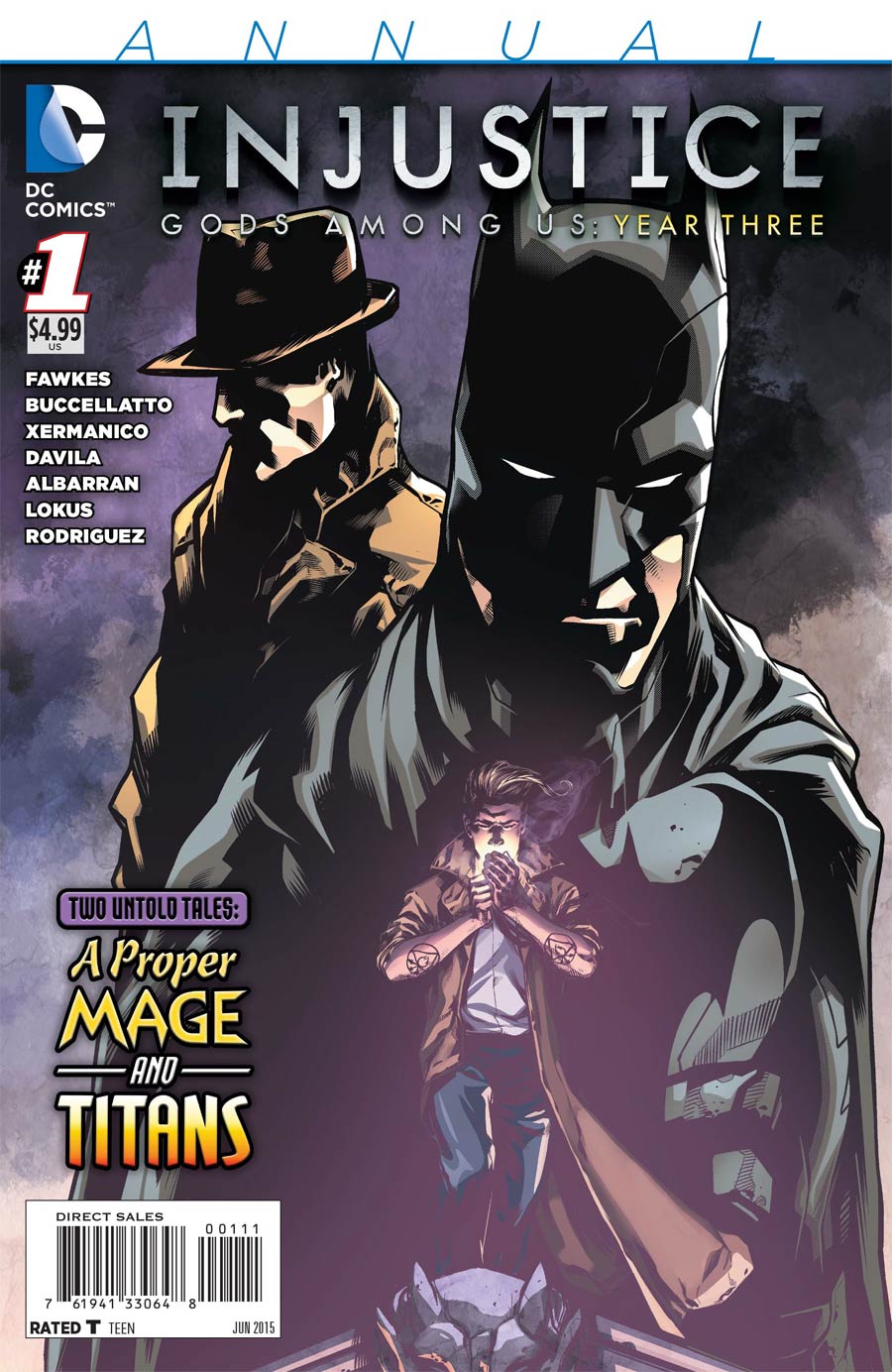 "A Proper Mage"/"Fall of the Titans"

Click to enlarge
A Proper Mage: The Batman seeks to gain an edge against Regime Superman by obtaining mystic to support his cause. He calls on Rose Psychic and Doctor Occult to aid him and they are willing to do so. Doctor Occult calls in a debt to gain the Scepter of Cepheus, and encounters Constantine while doing so. He then travels further and obtains other items in his form or that of Rose Psychic. All the while, he's shadowed by Constantine. Occult looks to dispatch Raven, but she's too powerful, and shunts him to the form of Rose Psychic, while killing Occult. Constantine, however, comes to her aid Rose cannot exist long without Occult and Constantine implores her to finish the job by dispatching Wonder Woman. Rose Psychic teleports to Themyscira, but Wonder Woman cannot be taken unaware. Rose is able to use an agent that causes Wonder Woman to sleep, and she seeks to teleport once more, but her destination is usurped by Constantine, who waxes on while stealing what magical accoutrements she has on her person, then vanishes.

Fall of the Titans: The Teen Titans are in Metropolis on the day it's destroyed by Regime Superman's misguided actions. Kid Flash and Beast Boy are both killed. Later, at Titans' tower, Nightwing informs the teens what has occurred and that Regime Superman has killed the Joker. Superboy is deeply affected by the news and flies off. He finds Regime at the Fortress of Solitude and questions why the Joker had to be killed. Regime has no answers for him, and Superboy flies off. Later, Regime calls for a world-wide surcease, and Superboy decides that he needs to take him down. Superboy returns to the Fortress to find the Phantom Zone projector. However, Regime has all ready secured the projector, and melee ensues. Superboy isn't faring well, but the rest of the Titans show up to aid him. They're still no match for Regime, who ends up consigning them to the Phantom Zone.

Story - 1: The amount of inconsistencies in both stories prompt the question: Has either of these two writers read Injustice: Gods Among Us? The idea of Constantine's story was to fill in the gap of Raven and Wonder Woman's ensorcelling. That's all that needed to happen. Instead, we're given the Injustice formula of needless deaths, and paint-by-numbers plot-holes. Constantine seeks to protect his daughter, Rose, before there was any need to do so. The story shows no attack on her, yet he's prepping for one despite the fact that she's safe. How Constantine is able to shadow Doctor Occult and Rose Psychic is beyond sense, as they're carrying enough magical items to sense molecular structure. It's just more of making Constantine the smartest one in the room, even when it makes no sense at all. The need for teleporting Rose Psychic isn't clear, and neither is her warning that Constantine cannot be trusted. Anyone who's read a single issue of Constantine knows that he cannot be trusted. That's not news in the slightest, however, the scene is set-up that Constantine has done something wrong, when in truth, it's that he will do something wrong, this tale tries unsuccessfully to show the seeds of that iniquity. It doesn't come together.

Fall of the Titans is perfect fare someone unconcerned with any of the developments that have happened over the course of the last three years. That Regime Superman would consign the Titans to the Phantom Zone isn't the problem, it's that he does so before he's even up to that level of pragmatism yet. Injustice: Year One showed a gradual decline for Regime, but the events of this story show that his fall was with an immediacy that the first year never depicted. Superboy's actions are irrational, and all of the Titans are foolish to a level than requires a great amount of stupidity to believe, but believe that Superboy would die from internal bleeding is laughable, especially when he survived a nuclear explosion on the second page of the story. Kid Flash and Beast Boy's deaths are just more of the Injustice treatment i.e. "Someone must Die!" Kid Flash ran straight into the explosion. Forget about his speed and reflexes, he just runs right into it. Superboy, who's no slouch for speed either, decides to shield Beast Boy, rather than fly away at top speed. It's seems that the writers know that their readership doesn't care about consistency or even accuracy, just the formula of faux uncertainty.