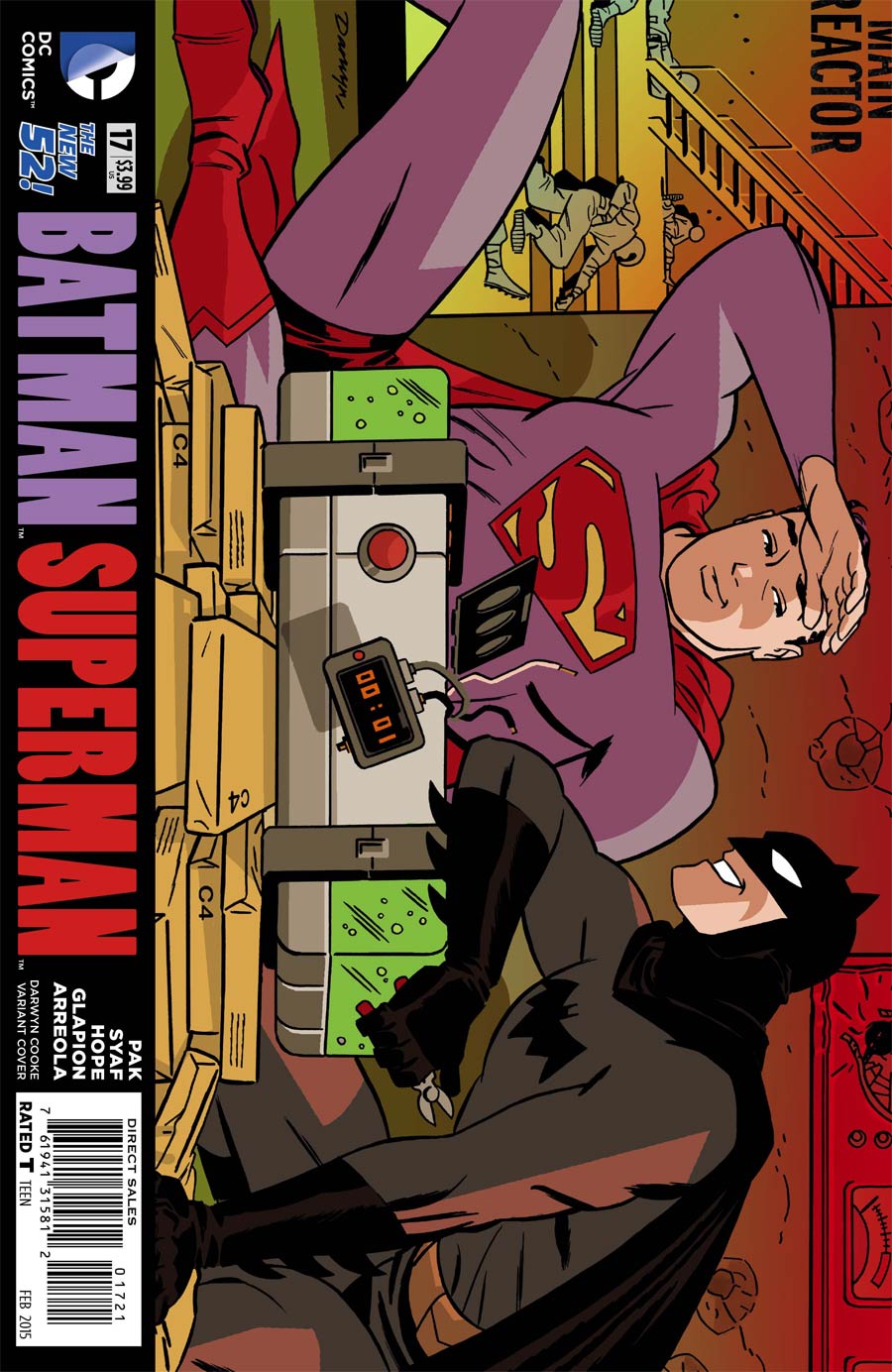 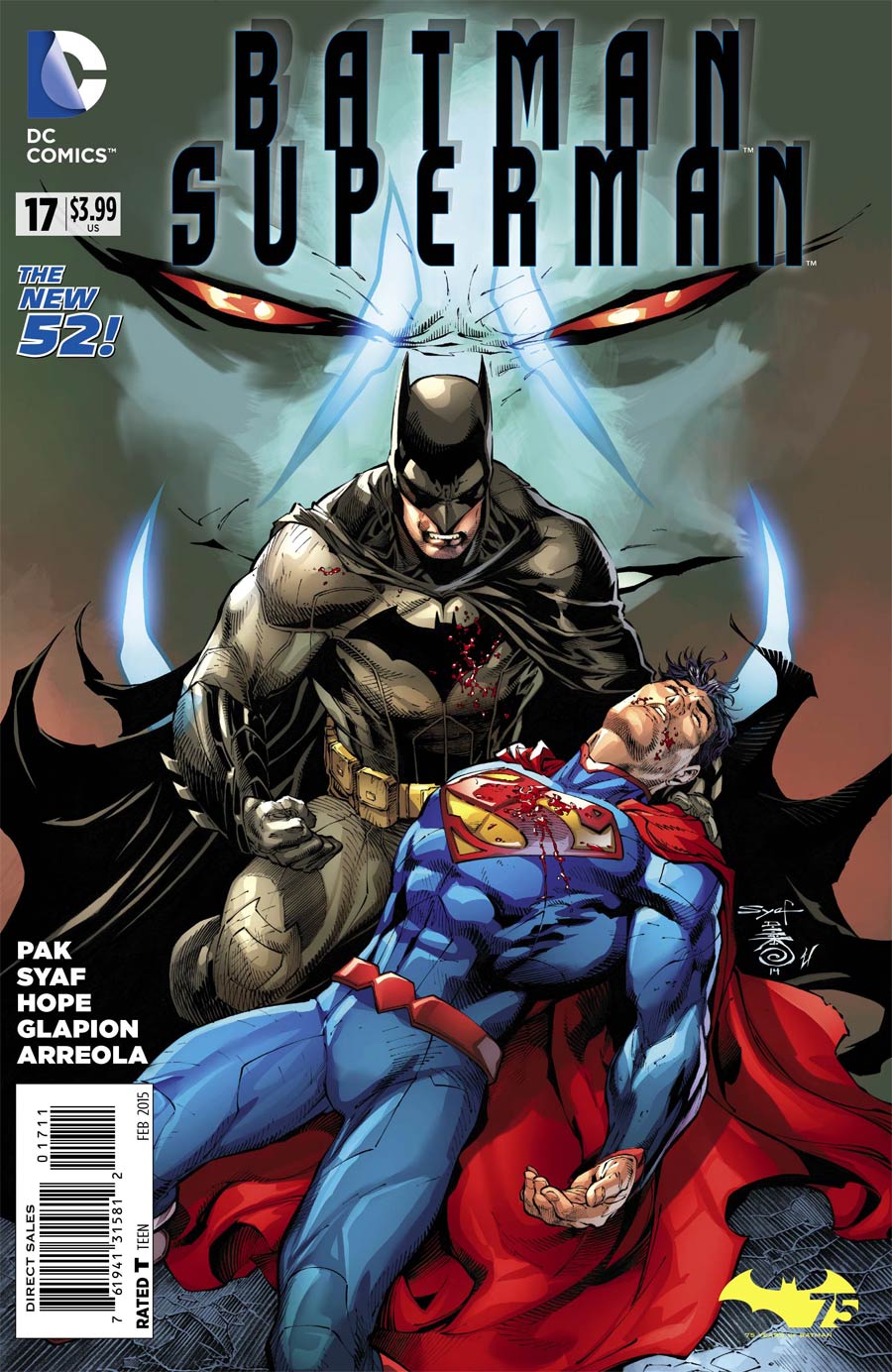 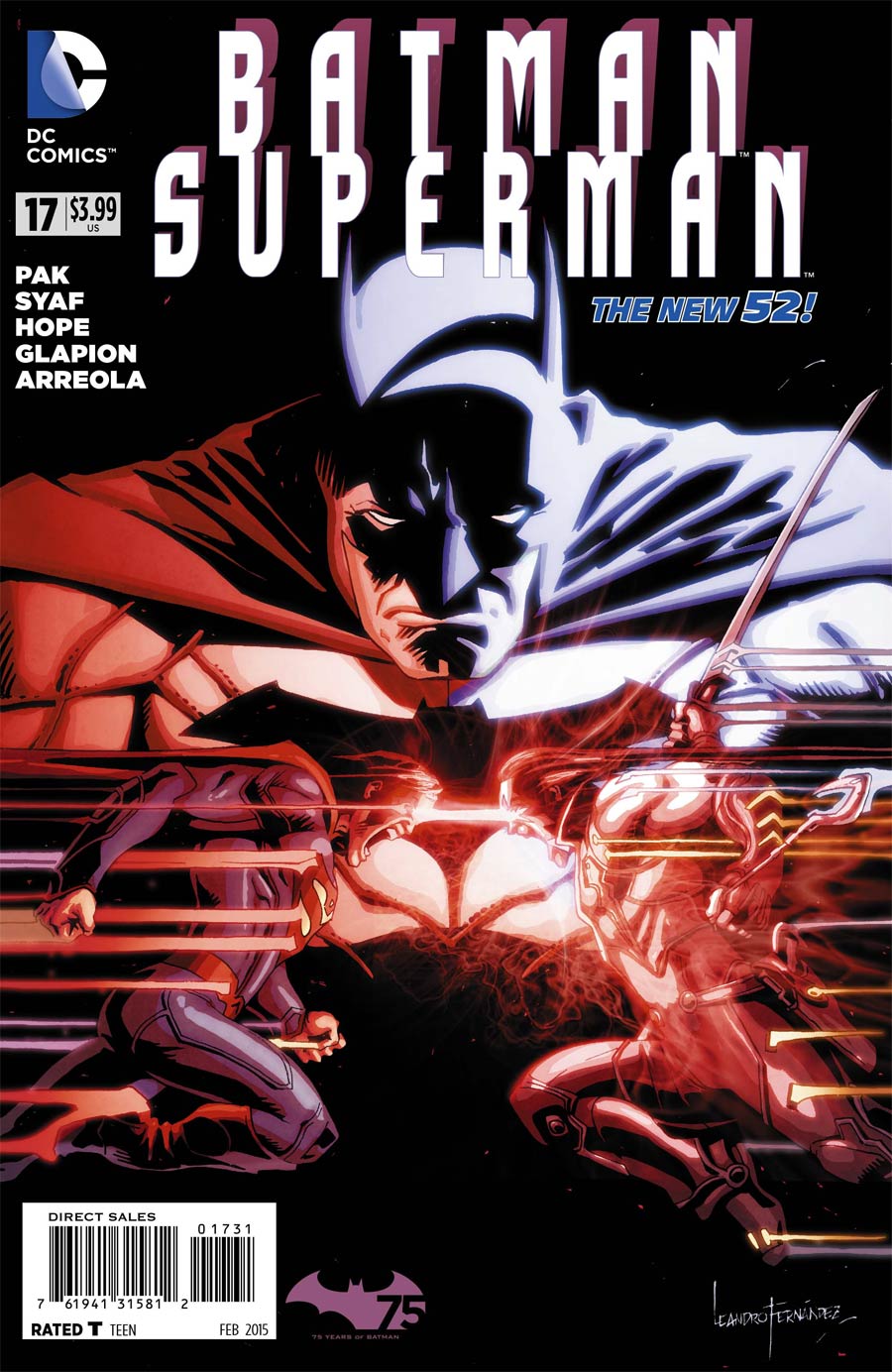 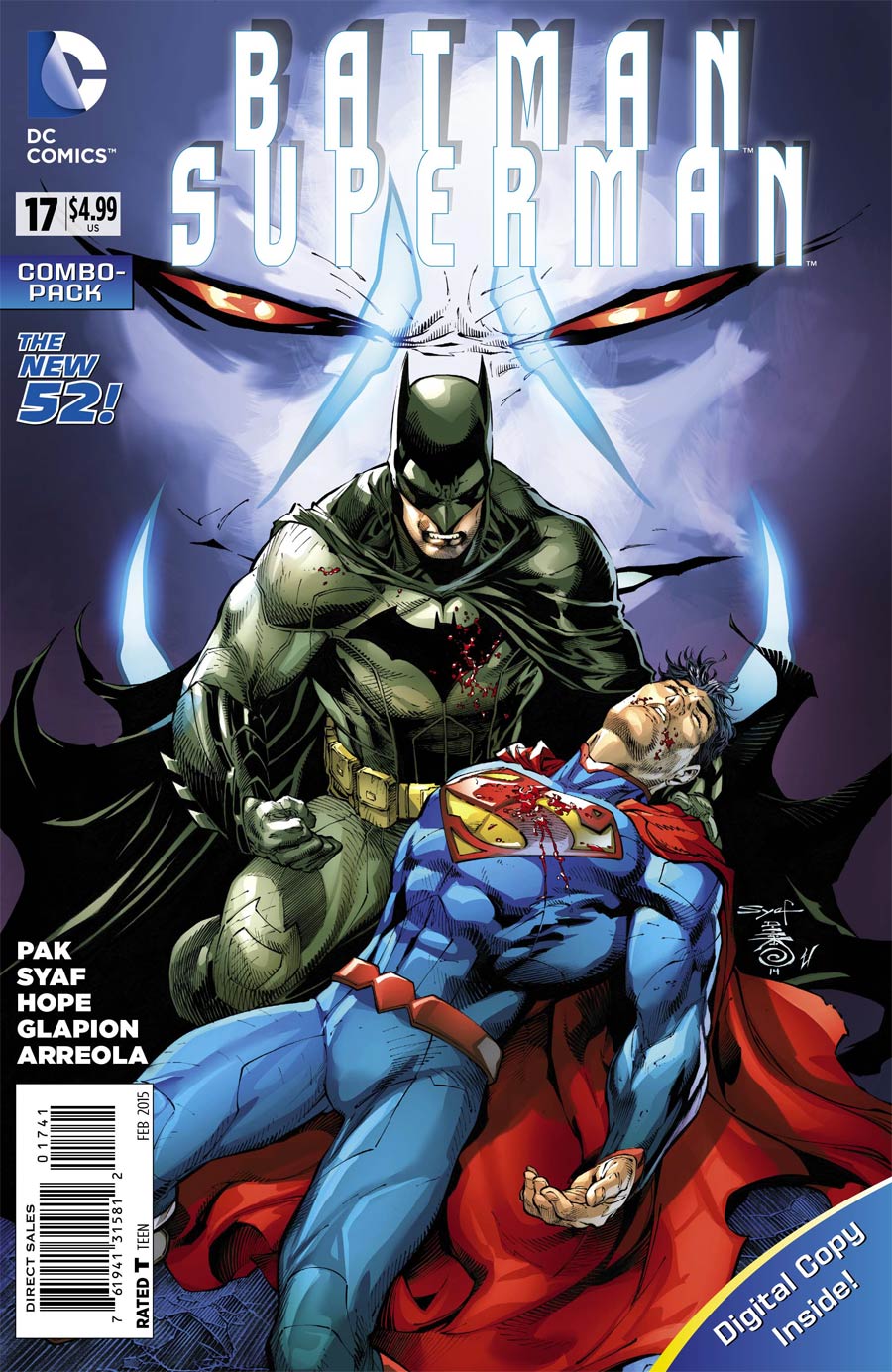 Superman's friends and family are in the crosshairs of the Unseen Terror.

This villain has firepower that defies Superman's powers.

Question is, who is this mysterious villain? And why does he/she hate Superman?

The issue begins right where Batman/Superman #16 left off. Our mysterious attacker has shot three people who are close to Superman. Unfortunately, Superman is too late to save two of the targets, but he is able to save Lex Luthor.

At first, Superman accuses Luthor of being the nameless villain. But Luthor is very quick to point out that the killing of Glory Miau and General Ahmad would hurt his own bottom-line. Also, Luthor's own self-importance makes it unlikely that he would off himself - even to spite Superman. In Luthor's mind, the world's economic forces just can't be sustained without him.

Luthor's smugness is irritating, but his points hit home. He is not the author of all this tragedy.

So, Superman and Batman continue their detective work. As the heroes communicate via radio, the villain again interrupts their conversation. They realize as they talk to the villain, he is talking to them in their heads. This Unseen Terror is a telepathic villain.

Going off that clue, Superman and Batman visit Hector Hammon. Old Huge-Head himself denies being the instigator of all this horror, but he theorizes that the only person on Earth with that kind of firepower is the alien Lobo.

What follows is awesome. Superman and Lobo exchange wisecracks as they punch and brawl.

It's a beautiful thing to see in a comic book.

However, it becomes apparent that Lobo is also not this Unseen Terror.

So, how do they catch this villain? Everyone is now on guard. Supergirl is watching over the Daily Planet. Steel is protecting Lana.

Our heroes need bait. And Batman knows the perfect person for the job.

I can't help but wonder if he consulted Superman first. Bet not.

Story - 5: The Good: From start to finish, this is an excellent issue. Everyone is in character. From Luthor's arrogance to Lois' sarcasm, everyone is as they should be. I hate it when characters are changed to fit an author's plot.

The story has no downtime. Every word, sentence and panel moves the story along and reveals character motivation. The reader feels Superman's frustration and sorrow. He wants to punch something, but instead he goes to a candlelight vigil for the now dead Glory Miau. I like seeing Superman's humanity. He is a man of deep feelings, but he keeps himself under control.

Also, I love that Superman and Batman are all business. There is a little banter and humor. But it doesn't overshadow the story. They work well together. This is how it should be. They are friends who care about each other and about those who are suffering. They are both determined and loyal. And neither of them will stop until this Unseen Terror is stopped.

I love the inclusion of Lobo. Lobo is my favorite villain of all time. Lobo's loud, unafraid, and he loves attention. He is also one of the few villains that can go toe to toe with Superman in a brawl. I just love that!

This issue left me wanting more. Always a sign of a good story.

The Bad: I guess the only negative for me was that I felt that Superman should have known that Lobo could not be this mysterious villain. Becoming a mysterious killer was not Lobo's style.

Conclusion: I'm loving the series. I just hope the final reveal of the Unseen Terror is worthy of this series. Sometimes those reveals can be a bit of a let down. But I'm hopeful that Greg Pak can pull it off.

Art - 5: The inside artwork is terrific. Syaf continues to do good work. Superman and Lobo look terrific as they brawl. Hammon looked creepy, as he should. Again, expressions were spot on.

Cover Art - 4: The art work itself is beautiful. Batman holds a dying Superman in his arms. In the background, we see the eyes of our mystery villain look on. But, I'm not sure why this image is on the cover. Superman is not mortally wounded in the story. So, I feel like the cover is a little misleading.