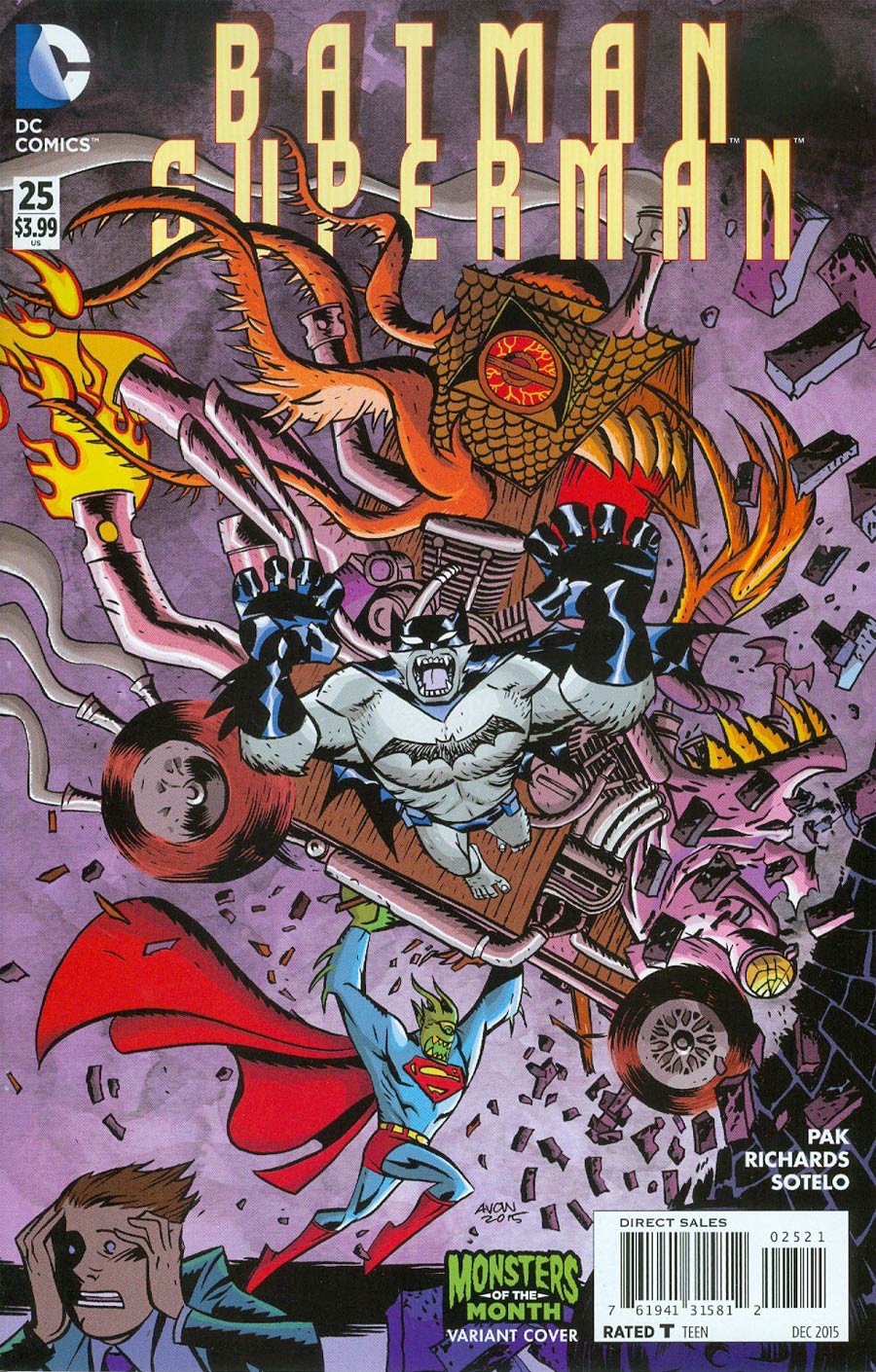 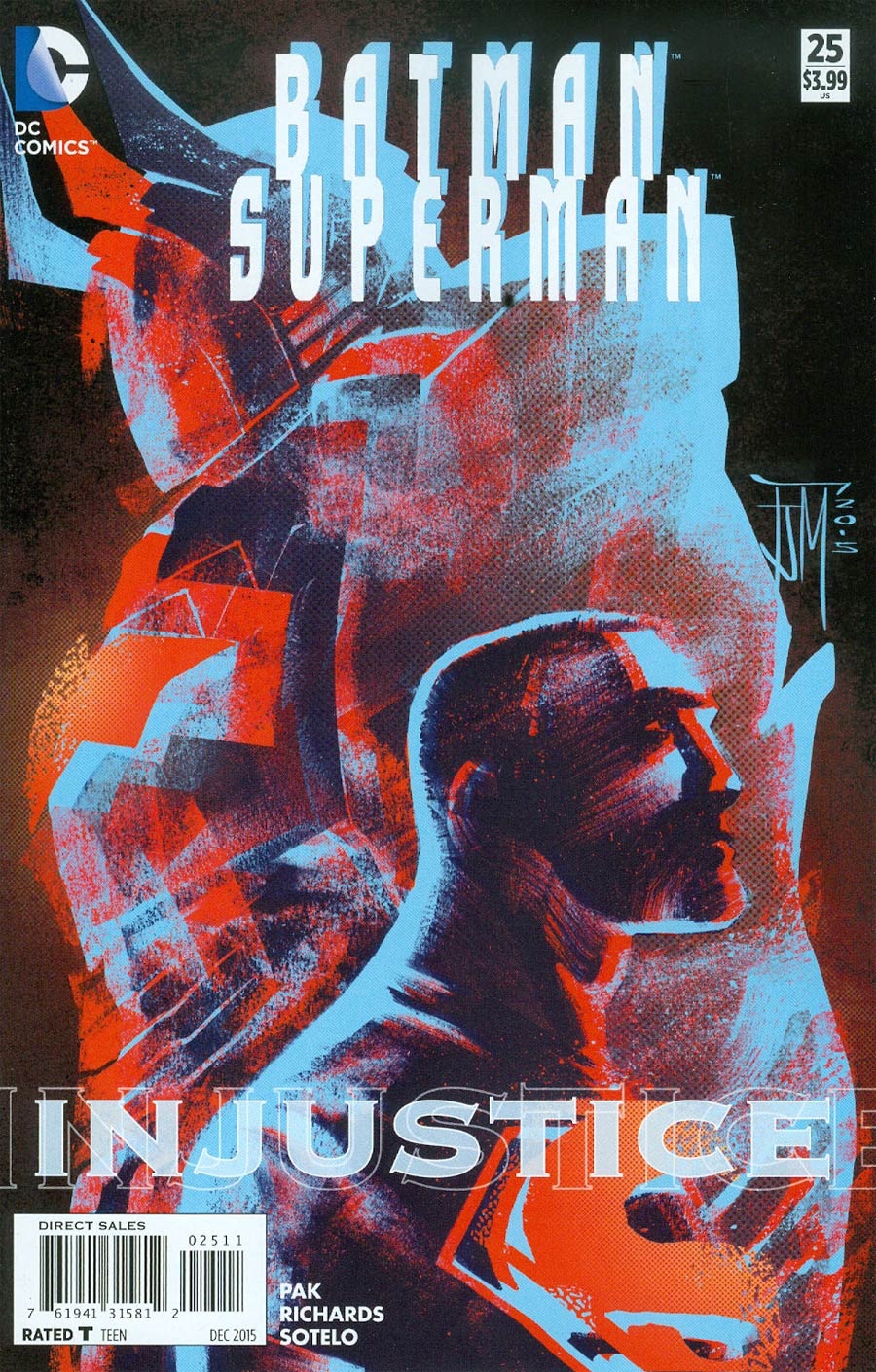 Click to enlarge
The new Batman, aka Jim Gordon, is on the hunt for Clark Kent. Apparently, despite the fact that Kent saved their collective asses in Batman/Superman #24, Gordon doesn't trust Superman.

Meanwhile, Superman is using Waynetech items to continue his search for those who stole his powers. While using the Batwings to fly, he comes across the Barbarians of the Dawn Command. He accosts them, but Vandal Savage shows up and handily defeats Superman in a fist fight.

A wounded Superman is saved by Batgirl, and together they figure out Savage's evil master plan. Savage is trying to obtain the Uranium from decommissioned nuclear weapons. But Superman is determined to stop him.

And since Bruce Wayne is no longer in the hero business, other members of the Bat Family (Batgirl, Red Hood, and Night Wing) are going to help him.

Story - 3: The Bad: Jim Gordon as the new Batman. Gordon is dictatorial and nasty. His leadership style does not inspire loyalty nor do his lackeys seem to have direction or purpose. They are more like villain minions. They are there to follow orders. They have no separate personalities. In Bruce's Batman family, Batgirl and Robin were heroes in their own right. They were interesting, and we cared about them. Bruce Wayne was a Batman who inspired and encouraged each family member to be their own hero. Gordon is just annoying.

We now live in a world where the solitary man who needs no one is put down and scoffed at. One of the things I love about a fully powered Superman is that he so rarely needs help. He's a man who handles his business. The fact that he now has to depend on the Bat Family to get things done is a bit disappointing.

Apparently the only way a hero can be interesting is if he is beaten to a pulp every issue.

The man who can take care of business is no longer valued. One must suffer and be hated in order to be a true hero. There can be no love for the powerful - even if they do good. All their actions are suspect.

The Good: At least they haven't broken Clark's spirit. His desire to help people in trouble is still a part of his character. And he is still willing to fight evil, even if it means his own death.

I like the use of Savage. He's brutal, and he's smart. He's a powerful adversary. Taking down Savage is always a challenge for Superman - even when he does have all of his powers.

It was nice to see members of the Bat Family show up. I hate that Superman needs them, but I do like the fact that these heroes are there for him.

Conclusion: Why is Gordon so distrustful of Superman? Why the obsession?

Art - 4: I do like the inside pages. From Clark's exuberant expression when he flies to his determined look at the end is glorious. Savage looks mean and threatening. I especially like Richard's drawing of Batgirl. His depiction of her is almost off somehow, but she looks so relaxed and in her element that I didn't care. I like a confident Barbara Gordon.

Cover Art - 2: Don't like it. It looks like someone took colored chalk and drew on a black chalkboard. The cover does not entice excitement nor does it make me want to pick it up to read.