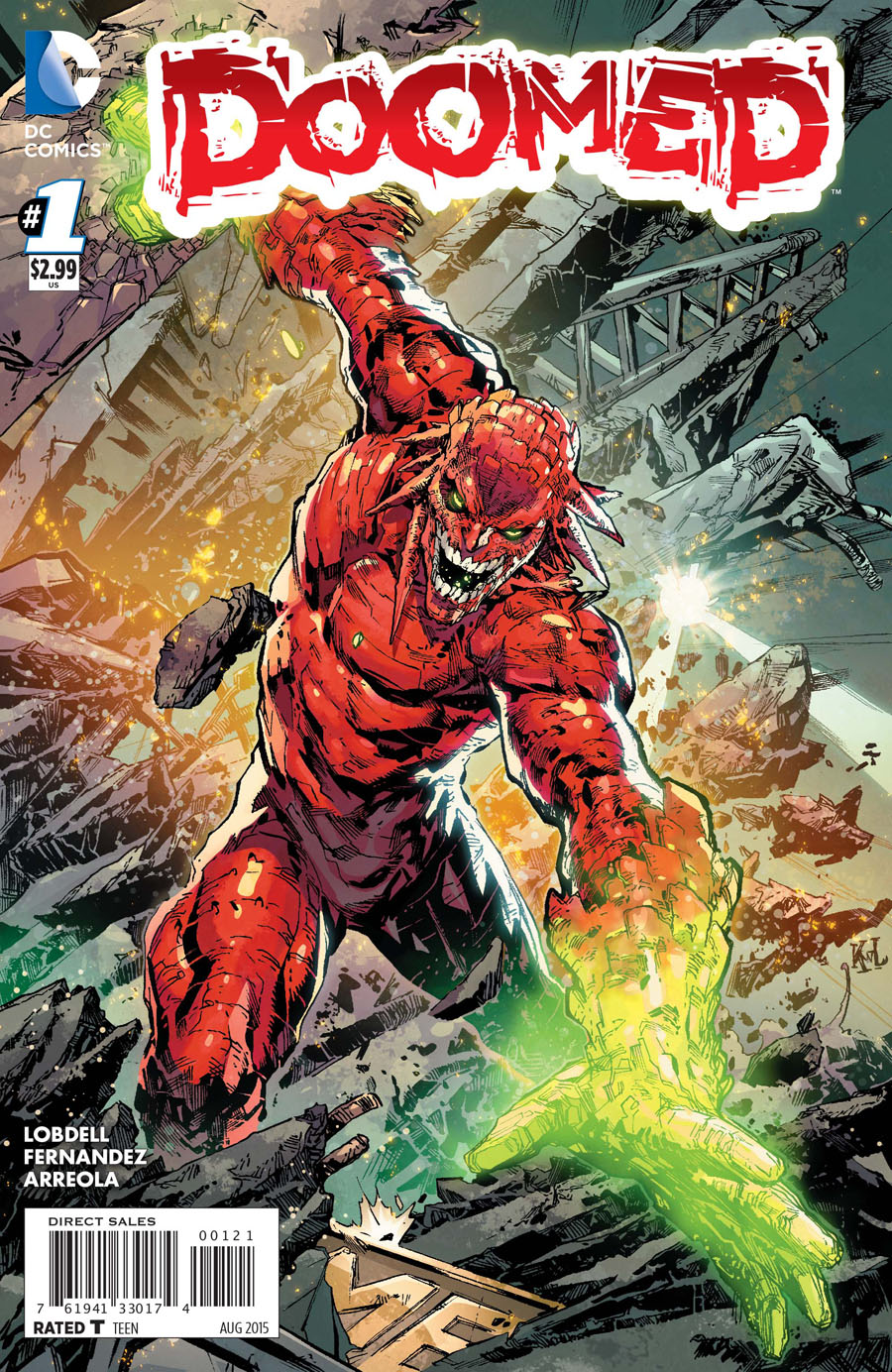 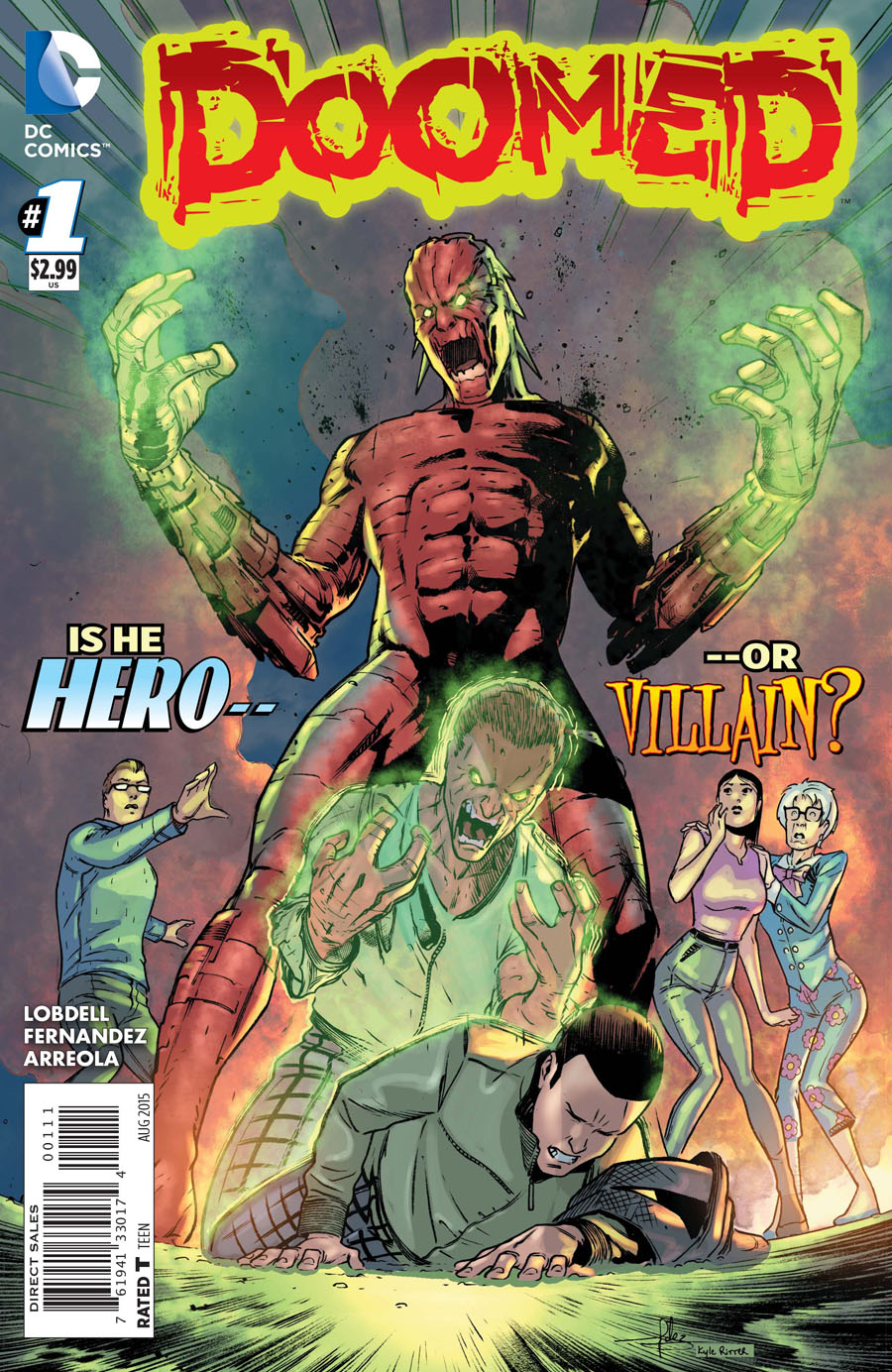 Click to enlarge
The College Freshman named Reiser was like any other student intern at S.T.A.R. Labs, Metropolis, until he was... DOOMED!

Reiser wakes up with memories of being in a Metropolis high rise apartment, instead finding himself deep beneath the city in a crater surrounded by overturned disused subway cars. When he looks in a pane of glass he sees a bright red rocky face staring back at him and he howls with shock... and Reiser remembers the past twelve hours.

He is a goofy teenager leaping over the subway fare barriers eager to get outside. A text arrives from his Aunt Belle with a selfie of her dog Oui Oui, but Reiser is so excited about his internship at S.T.A.R. that he ignores it.

Several teenagers are shown around the spectacular projects in the facility, except for one room, and of course being denied only serves to pique Reiser's curiosity. Later, Reiser and a fellow intern, Jayne, are kept behind by their professor and instructed to do the clean up shift that night at 11pm. Reiser, optimistic at the responsibility, Jayne less so. Returning home, Reiser meets his roommate, Roman and bumps into their newest neighbor, Clark Kent.

The two have a flashback of the hunt they had to go through to replace their last roommate until they settled for Clark, despite Reiser wanting his crush, Clarice to move in. Reiser decides to check in on his Aunt Belle. Belle is having memory issues, after being a lawyer and CEO, Belle is a shell of her former self. Reiser does extra shopping and chores to help her out, despite Oui Oui's dislike of him. Reiser hurls a tennis ball out of a window and Oui Oui chases after it, this proves a mistake as a loud crash is heard soon after.

Reiser flashes to 11pm and him donning a clean up suit. Jayne is still deeply disappointed but Reiser swears that if they want a cleaner at S.T.A.R. he'll be the best they've ever had. After over two hours of cleaning what appears to be a clean room, the steam cleaner takes its toll on Reiser. Jayne leaves him for a comfort break and Reiser, unable to see, unzips his suit, sure that he is free from contamination. He realizes too late that he has stupidly rubbed green gunk all over his face and suits up again before Jayne could see.

Reiser then recalls being decontaminated and making his way home. He's startled to recall meeting Clarice, who shows him her new place after missing out on being a neighbor. The new place is the partially finished building site for Lex Plaza. Clarice leads Reiser into a now abandoned show apartment.

Reiser can't believe his luck as he lies on Clarice's bed. She strips off and climbs into the shower, she asks about his day and then invites him in to join her.

Aroused, something begins to happen to him and he starts burning up. Clarice grabs a towel and races into the room to investigate, only to find Reiser has burnt a hole in the floor and sunk into it.

Story - 3: This first issue is all about character set up and it does it well despite some pretty stilted dialogue.

Although Reiser is a goofy moron, he by some fluke gets fast tracked into the S.T.A.R. Labs internship program. A moment of pure stupidity infects him with Doomsday spores and being honest, his optimism and stupidity make him likable. Fallibility does make for compelling, intriguing, reading, even if it makes you think, "Why is this book even being published when Supergirl and Superboy don't have titles?" As with all the Superman books right now, continuity is completely botched. Clark Kent is floppy haired, bespectacled and Italian suited - no buzz cut, extra small tee, customized stolen Bat-bike or super steroid arms despite him moving into the new neighborhood. Sigh.

Nothing action based happens and the finale is underplayed massively while also instigating a super transformation through... questionable means (What was wrong with anger like the Hulk?) As it is still playing out, the origin can't honestly be fully judged, everything so far however seems forced to rip off similar properties. I offer a generous 3 waiting to see what the future will bring.

Art - 3: Was that Professor Hamilton? The art is actually interesting, not spectacular, though Fernandez is given nothing action based to work with. It has a roughness to it that makes you scrutinize the pencilling to be sure but there is no energy to the panels yet. The most energetic thing to happen was Reiser hopping the subway barriers.

I hope the book amps up now the cast has been introduced.

Cover Art - 1: Clearly, like the interior story, this is a sloppy adaptation 'love letter' to Marvel Comics' sixties boom, the only thing is 'Doomed' looks more like an elderly tree than Doomsday offspring and then there is the emulating Marvel thing that confuses. Dull, Dull, Dull.

Variant Cover - 3: This variant cover offers a bit more life and energy, Doomed looks like a genuine force to be reckoned with. This is by far the better of the two covers.

Does anyone else look at Doomed and see Bloodhawk (X-Men 2099) & Groot's (GotG) love child?