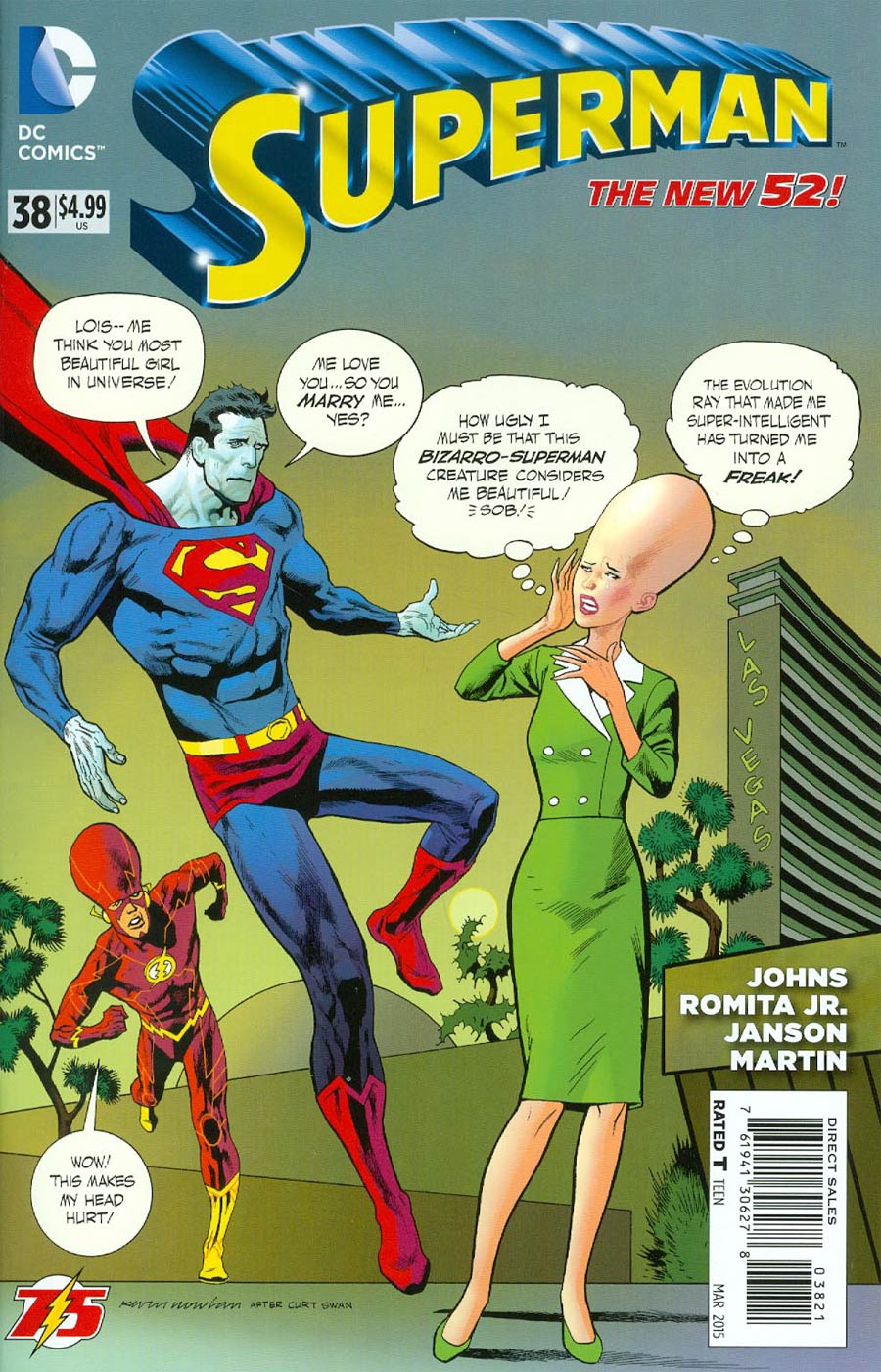 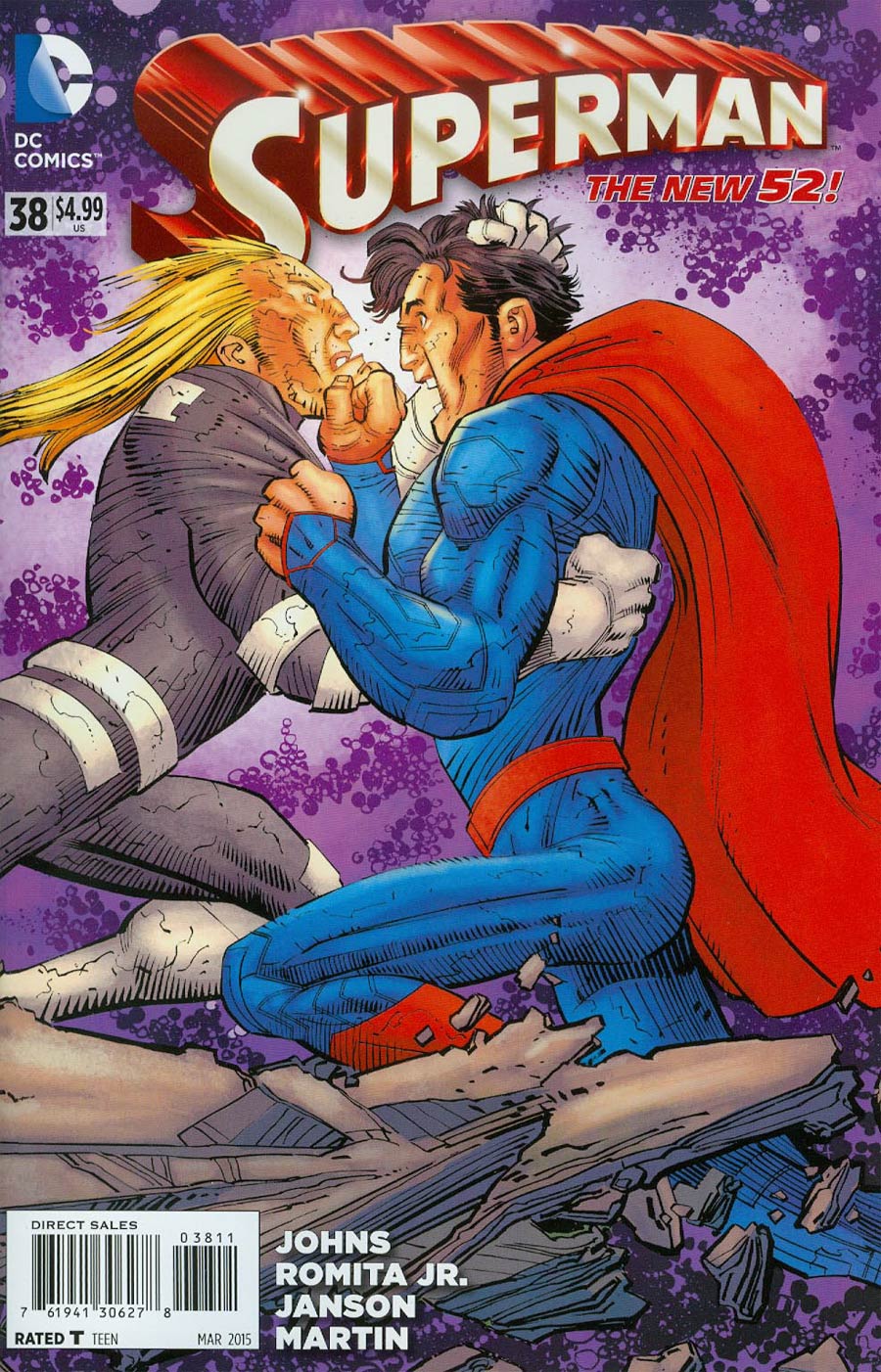 Scheduled to arrive in stores: February 4, 2015 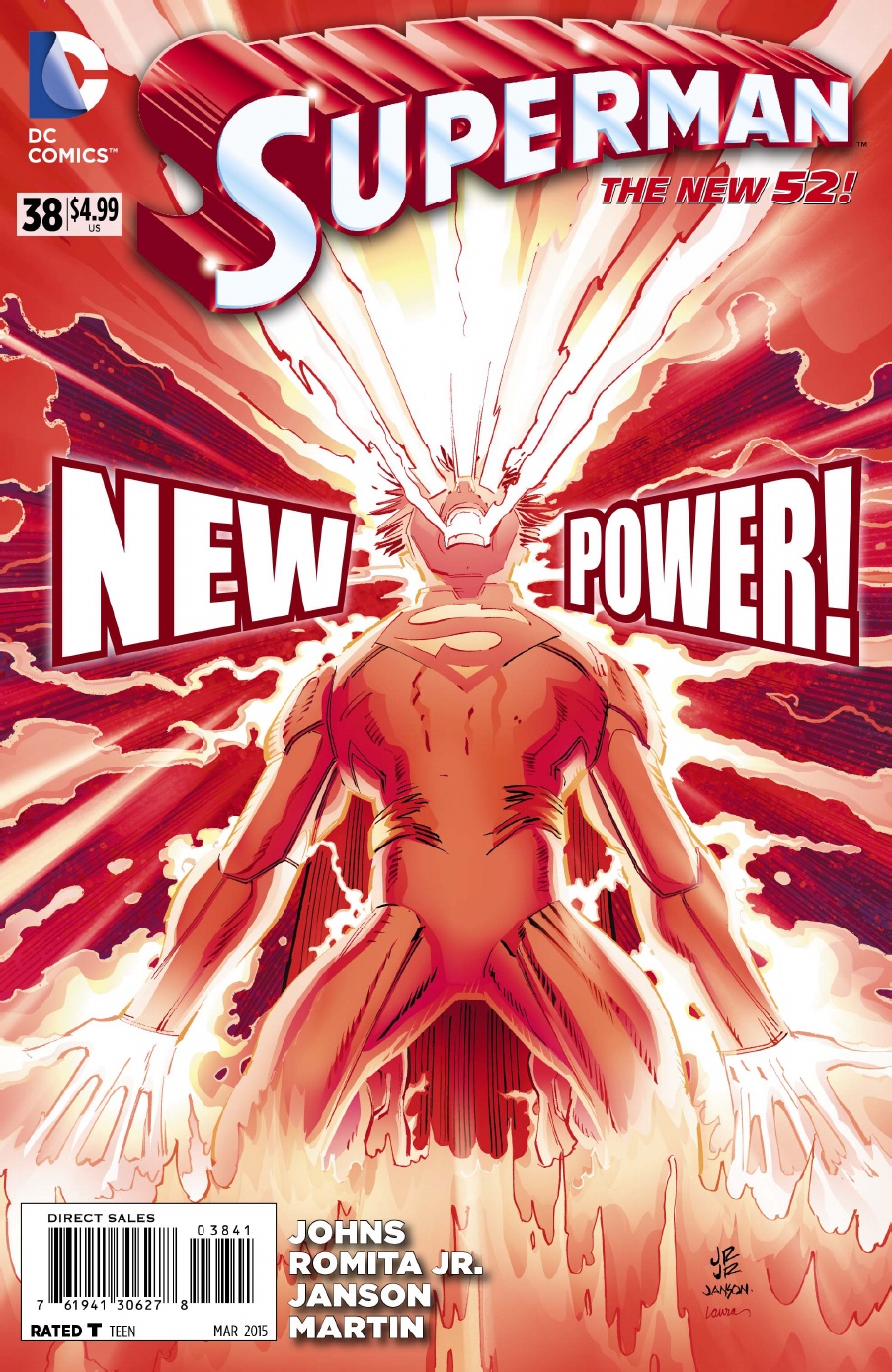 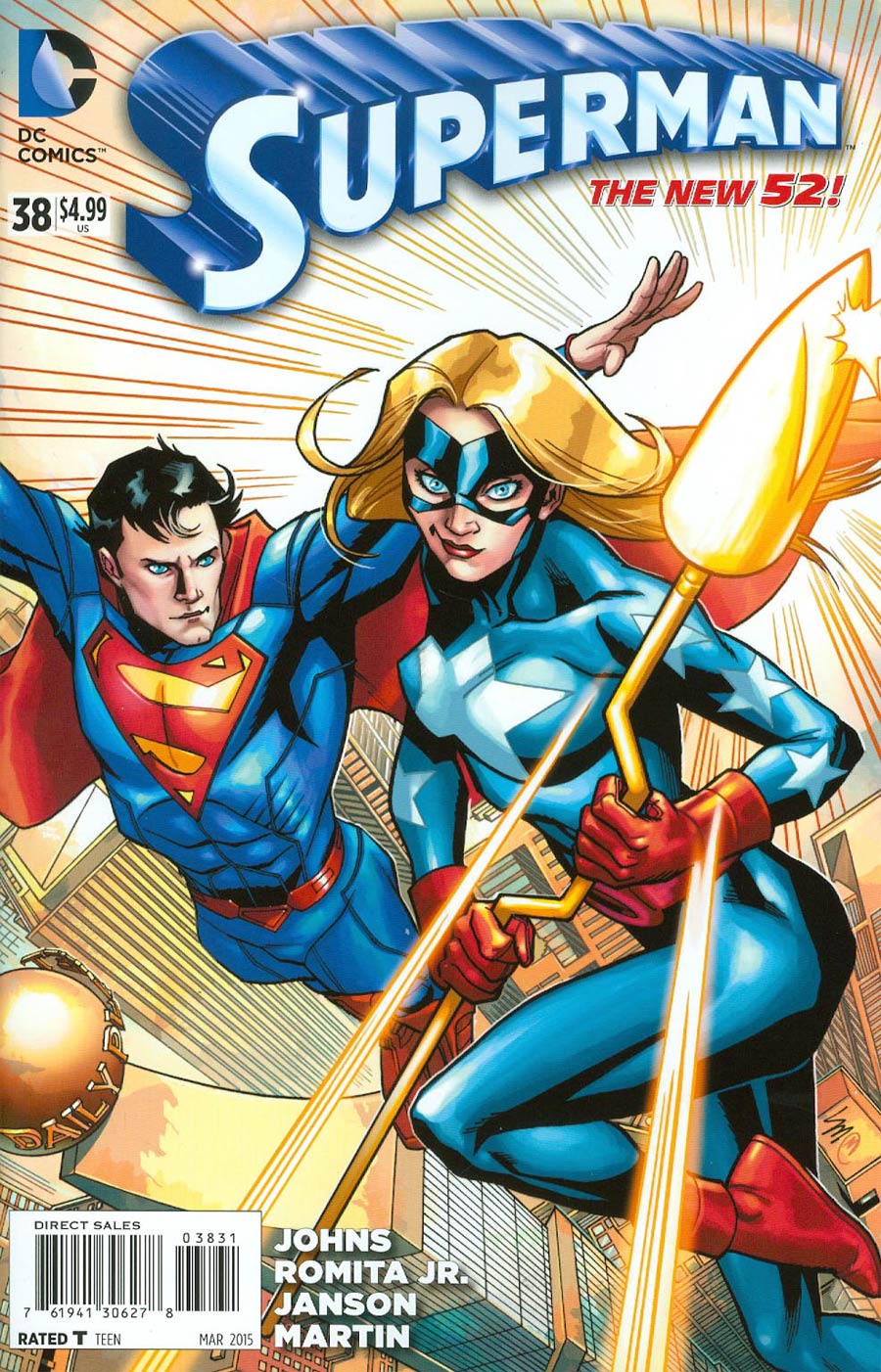 Ulysses attacks Superman for his part in the death of the Great World in the Fourth Dimension. He teleports all the passengers, himself and Superman back to Metropolis much to the surprise of Lois, Jimmy and everyone else that was left behind. Ulysses is hell bent on returning the favor and destroying Earth. As Neil/Ulysses smashes the two of them into a skyscraper Superman doubles back to save the people from the debris and they beg him for answers. Superman tells them there never was a perfect utopia, You can't look to other dimensions for answers, you have to look to yourself for answers, for help and hope.

Neil regaining composure grabs the Man of Steel and Clark directs them into forestry as far from Metropolis as possible. Ulysses reveals that with the death of the Great World all of its energy transferred to him and by pumping that directly into the Earth he can cause it to explode. Regretfully Superman swears to stop his mourning friend and fires a beam of heat vision. Ulysses effects Clark as before, overloading and absorbing his energy intending to use it for himself. Suddenly Clark feels a powerful feedback as Neil inadvertently activates a cellular depletion in Clark - an explosion so big it dissolves his armor and detonates the surrounding 5 square miles with solar energy.

When Clark finally wakes up he discovers Batman has whisked him away to the Batcave and tended to him while Ulysses has been placed in a cell on Strykers Island where technology designed for Parasite is being utilized to contain him. Batman tells Clark his powers have evolved to a second stage and that Solar Flare is the next level of his abilities. Clark is more concerned for Neil telling Bruce that the misguided hero isn't a villain in the traditional sense, he is grieving. Alfred interrupts and produce Clark's cape. The armor is completely destroyed and unlike the Fortress, cannot respawn. Instead he has the skintight fabric left to him by his birthparents, a ceremonial suit. Bruce offers to take Clark to Strykers, and this is when Clark receives a bombshell, whenever he uses his solar flare, he is completely human for approximately 24 hours until his cells reabsorb that energy.

Despite the danger of being powerless, Clark, now rehired at the Daily Planet as a reporter, on the promise of an exclusive, visits Neil. Neil, soaked in blood and bandages, completely bald from the flare, turns to Clark and tells him he never EVER wants to speak to him ever again. Clark complies but offers alternative guests to see him: The Quinns. Despite all that has happened they swear to stand by their son and to love him always, no matter what. Clark watches from the shadows as Neil breaks down in tears.

Later at the Daily Planet, Jimmy is trying to push some really bad photos to Perry to accompany Clark's big exclusive. Perry isn't convinced and opts for a stock photo of Ulysses and approaches Clark to congratulate him for his front pager. Despite the emotional content Perry opts for the 'Menace' over the 'Tragic' though and it pays off singlehandedly turning the print division around, at least for now. To celebrate Jimmy takes Clark out for a hot dog and a long overdue heart to heart. Jimmy tells Clark that he missed his best friend. Lois, though back on the beat, like Clark after both had career missteps, is spending all her free time with Jonathan Carroll.

Jimmy was touched by Superman's speech and realized that all the people that had wanted to escape to the Fourth Dimension were in dire need of help and he, as a billionaire, had the means to give it to them. Jimmy's parents had faked death a few times before and had always fiddled with their billions before returning from the dead later to reclaim it. So while Jimmy had financial control he donated his entire fortune to all the people. Clark is taken aback that his friend has given up his every cent on the word of Superman. His experiences with Neil has taught him he needs a friend and confident - something that has been severely lacking in his life since his parents died. Clark takes Jimmy by surprise and offers a secret of his own... his secret identity as Superman!

Elsewhere, the hooded man watches the recent events on screen and reveals a damaged eye. With his healthy one he looks upon a parcel addressed to Clark and expresses his pride in Clark Kent...

Story - 3: The three points are for the introduction of the Solar Flare power, the return of a fabric costume, a job as a reporter, Jimmy not being richer than Bruce Wayne anymore and Clark revealing his secret. The rest of the story was predictable, dull, padded out with minimal dialogue and spoilt by DC's blog pre-sale. The flare is less a new power and more a tool for the really poor writers who whine that Superman is too powerful to write for. This is a good and a bad thing as it offers more variety for the reader - if they want a Siegel and Shuster-esque Superman they can read issues where he is forced to 'flare' and become weaker if they want a Morrison-esque Superman they can have that too and the closer to pre New 52 Superman is now accessible as nearly all the pre-reboot changes have reverted - the only things that the New 52 has changed now is the Kents being dead, Lois not being married to Superman, and Wonder Woman dating him.

"Men of Tomorrow" was a slow lackluster story that really has offered nothing. Kudos must however go to Geoff Johns for bringing back elements we love about Superman and introducing a new twist. Also, enough with Batman as a Deus Ex Machina already. Why couldn't Dr. Veritas have had Clark whisked to the Block - surely a science based character that monitors Superman and his powers would make more sense rather than a detective that just happens to be passing the scene?

Art - 1: I am not sure what has happened, whether it was rushed deadlines, last minute script changes or forced editing but the art was terrible. It was just incredibly lazy. Half the time it was difficult to see what was going on, the other it was left to the colorist to fix. All the energy that drove the other chapters seemed to vanish.

Cover Art - 4: The red explosive cover is great, bursting with an energy the interior was lacking. It promised excitement which unfortunately wasn't delivered but nonetheless the cover was enticing.

Cover Art (Alternate John Romita Jr.) - 1: Purple or Yellow color background, this cover is just beyond bad. Changing colors doesn't change one of the worst covers ever approved for publication. Superheroes by their very nature defy anatomy, but how was this ever okayed? As embarrassing as *that* Rob Liefield Captain America image.

Cover Art (Stargirl Variant Cover by Lee Moder & Mike Atiyeh) - 4: Fun, energetic, vibrant - but it is Stargirl hogging the cover, a solid 5 would have been if the heroes had swapped places!

Cover Art (Variant Flash 75th Anniversary Cover by Kevin Nowlan) - 3: A bizarre variant that adapts a classic cover by Curt Swan & Sheldon Moldoff. It is nowhere near as good as the Stargirl variant nor more creative than the other Flash covers but as it's a Swan recreation I'm a forgiving chap and enjoying it for nostalgia.