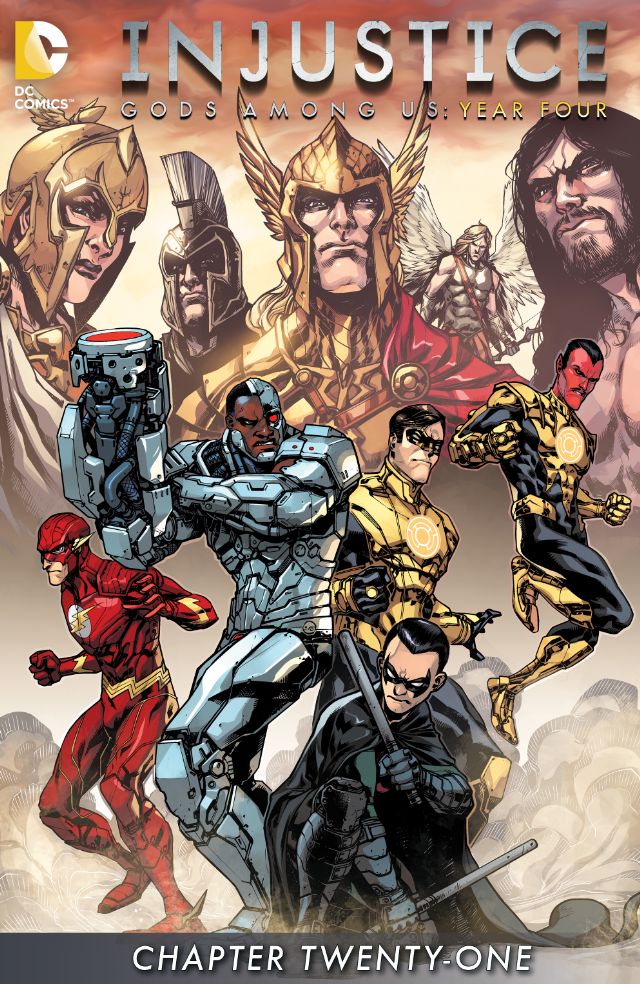 Click to enlarge
Regime Superman has left Earth, leaving the leaders of the world to consider a nuclear attack against the gods of Olympus. On Apokolips, Regime Superman frees Billy Batson, Hippolyta and Harley Quinn, then promptly does battle with Darkseid. Billy and the rest flee back to Earth with the aid of a Mother Box, while Zeus begins his war of submission against any worship aside of the Greek pantheon. Harley and company return to the Insurgency, and Batman asks for the Mother Box, stating he'll need it in order to gain some help.

Story - 1: The intensity of the story has picked up, but not the quality. The fact that Zeus can attack places of worship unchallenged is mind-boggling, and it would mean that none of the other deities give a rat's ass about their worshippers. The Greek pantheon being mythical, as opposed to the Abrahamic religions being believed is no excuse, the Hindu pantheon has been used in comics before, or even if we had to see Jesus Christ ride in and say: "I wasn't due back for another millennium or so, but, man, you asked for it." That the only challenge to this attack is either a nuclear strike or a New God, displays a rampant lack of imagination and just poor planning altogether with this story. In a fictional world where anything can happen, regardless of one's beliefs, that an omnipotent, omnipresent being would cop a DILLIGAF on such a situation, is just lazy... but that suits the parameters of Injustice perfectly. Don't think too much, if at all, and just watch the big explosions and pretty images. We couldn't even get Cu'Chulainn to come in and mix it up?

Regime Superman contending Darkseid is banal at this point. Perhaps, if Darkseid had been used effectively, it would hold more dramatic energy, but that fact that Regime is able to fly to Apokolips without a Mother Box was the first step towards disbelief. Buccellato doesn't know his DC Universe history, characters, Greek mythology, etc., and doesn't seem to care in the slightest enough to open a book and learn about them. The fight with Darkseid is a series of cover-page splashes, that are altogether meaningless. When Darkseid exclaims: "Superman unleashed. Impressive. So we fight to the death, then?" You have to hold yourself from combusting over such risible dialogue. The two of them are just fighting to the death now? Superman is only unleashed now? He was unleashed in Year One, when he fought Kalibak. Oh, do not forget what Kalibak said back then either, that he couldn't be killed because he's a god. I guess the rules have changed, or Darkseid wasn't going to kill Regime Superman, just rough him up real badly. It's a fight written out of Wikipedia, with Darkseid using his rarely shown ability to increase his size, and for no bloody good reason, as he reverts back to normal after a good right cross. This should be a great match-up, the universe's greatest force for evil against the World's Greatest Hero ... only he isn't a hero any longer, hence why it doesn't matter. Evil battling evil is a zero-sum game. The winner will still leave the Earth and the lives who inhabit it, at their mercy, such as that mercy may be. Not that it matters, after all, because if Regime couldn't handle Wonder Woman, he's definitely taking an "L" with Darkseid.

Art - 3: Not even the Derenick can save this ill-fitting tale of boredom affixed with vapid vision.

Cover Art - 3: They should have switch with one of the splashes within.