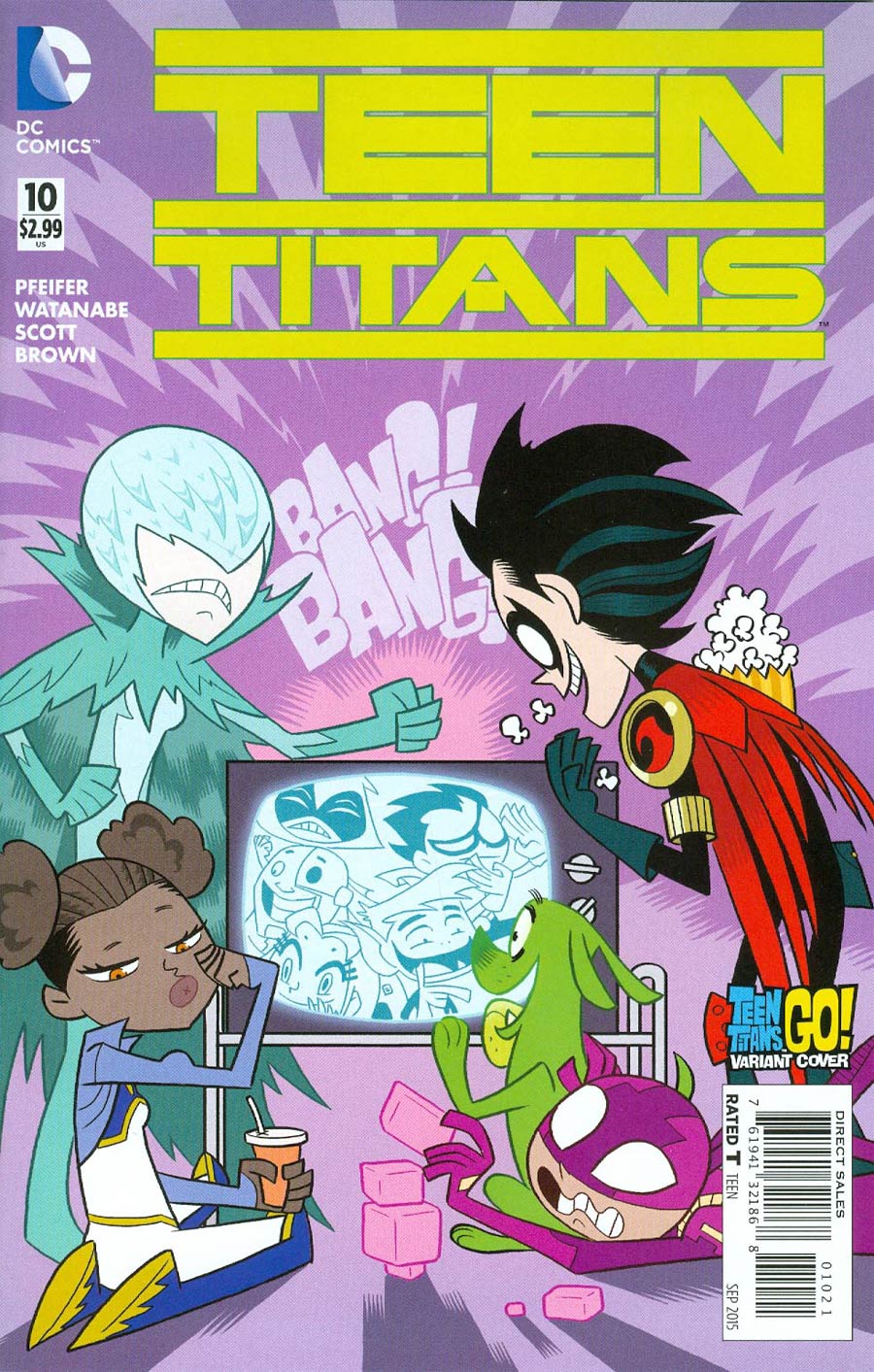 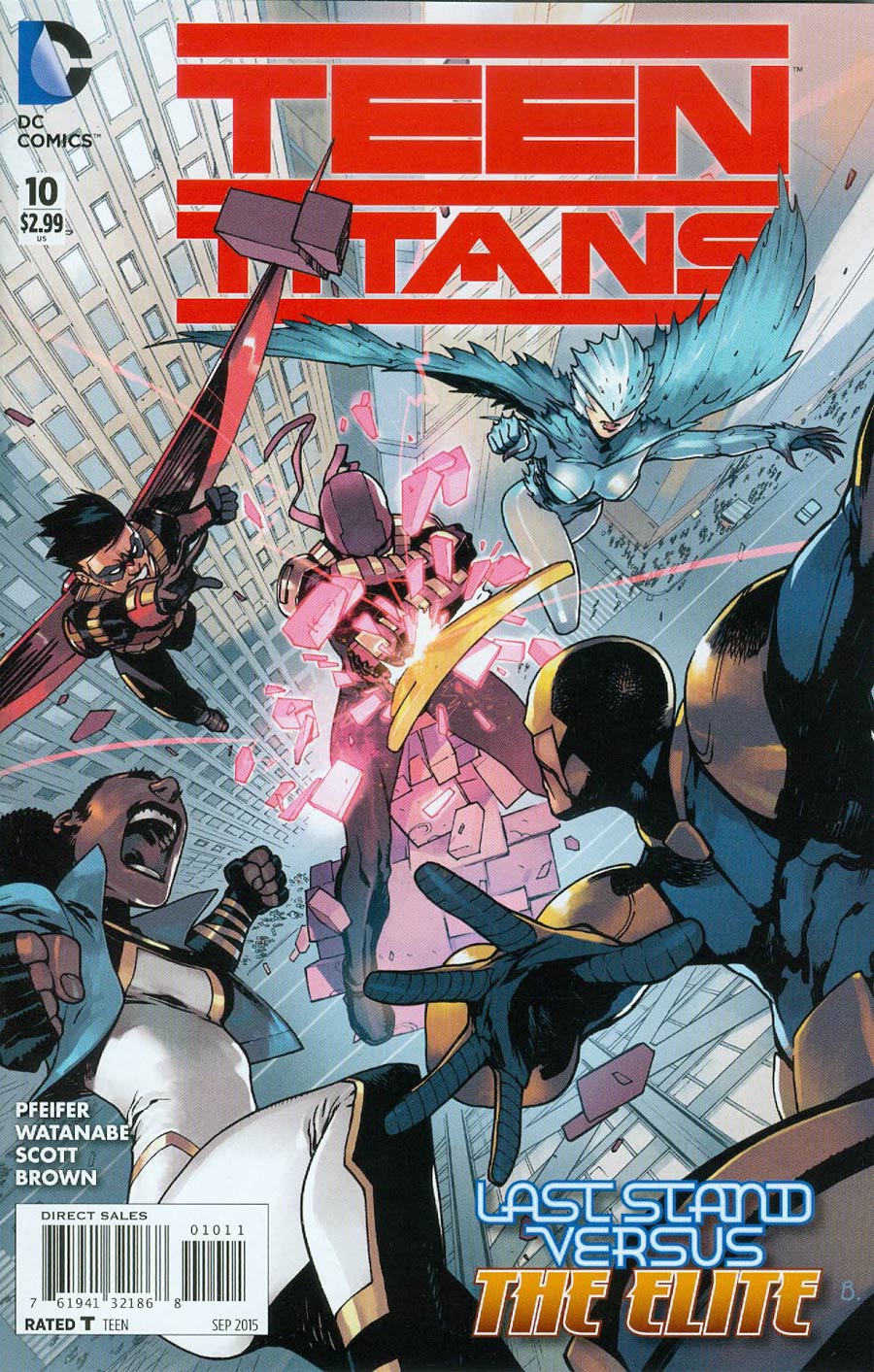 Click to enlarge
We open with the Teen Titans facing off with the Elite. The Elite want Superboy turned over to them, but this is disrupted when Kid Flash gets in Robin's face about leaving him and Solstice in the future. (This all happened in the previous series, before the book was re-launched). Robin uses a flash grenade (no pun intended) to stun Kid Flash, and Beast Boy transforms into a Hippopotamus and sits on Kid Flash to subdue him.

Superboy then repels Wonder Girl with his TK powers, after she confronted him about the supposed people he has been accused of murdering.

Wonder Girl then tries to take Superboy down again. They tussle high above the city, until Superboy dives into the bay with her, holding her under, until she passes out from lack of oxygen. He then throws her out of the bay toward her team mates, and flies off.

While this has all been going on, Robin and Raven transport to Manchester Black's New York apartment, to confront him, and take him down.

We close with an unconscious Raven lying in Robin's arms, with Manchester Black and the Elite looking upon them, defeated and in the arms of their enemies.

Story - 3: As excited as I was last issue about this series, and the direction it was heading, this issue kind of left me in thinking "shouldn't there be more to this?"...

There wasn't much "meat" to this story, which became even clearer as I wrote the synopsis for this issue. Now I'm not going to get into a tirade of how modern comics are really deconstructed or "paced" as industry professionals like to call it. But I was left wanting more, and not in a good way.

Basically this issue was about the Elite trying to take in Superboy, while Robin and Raven ambush Manchester Black. Like I said, not much meat to this tale.

I hate to continue criticizing this issue, but Pfeifer also didn't do the greatest job introducing this (New 52) version of the Elite. Last issue they were just a counter team for the Teen Titans, and this issue, they are officially named The Elite, and are now lead by Wonder Girl. It felt like there was a chunk of the story somehow lost in translation.

Superman fans may remember that The Elite were introduced in the very early 2000s in Action Comics #775. The Elite was led by Manchester Black, and was almost parodying the Wildstorm Comics team The Authority. They were ruthless "heroes" that didn't settle for just stopping the bad guys, they would totally eviscerate them! Joe Kelly, the writer of the issue, wrote them as a commentary on popular comic characters and themes of that time, very much like what Alex Ross and Mark Waid did on Kingdom Come in 1996.

Here The Elite are made up of teenage heroes, assembled to bring in Superboy.

One could make the argument that they are the "anti" Titans, and are a commentary on Marvel's cinematic Avengers. As many of the characters have very similar power sets.

And lastly Trinity who is almost like Loki. Who I know is not an Avenger, but cosmically crazy and she carries a big stick like Loki!

Thinking about this new Elite this way, made it more enjoyable for me, however I doubt that that's what Pfeifer was going for.

This issue wasn't all bad though. I am enjoying Superboy's new power levels. He seems to almost be the strongest on the team. Which is what one would expect from Superman's clone. Maybe it is appropriate to send a teenage version of the Avengers Elite after Superboy after all!

Also the big reveal at the end, when Raven attempts to "mind blast" Manchester Black, only to have Manchester "show" her visions of things to come in what seems to be a maximum security prison (possibly Belle Reve), housing some nasty characters from DC's pantheon of villains. Despero and Mammoth are the most recognizable on the fill page splash, hopefully we get some more from DC's well of villains.

Art - 4: As I mentioned in the review for last month's issue, one of the main reasons for me reading this book was Kenneth Rocafort's art. I love the work that he has done at DC thus far, and he seemed perfect for a book such as Teen Titans. Sadly he did not do the art chores on this issue, and even sadder is the fact that Marvel managed to steal him away for their new upcoming Ultimates book. I hate that we are losing Rocafort on this book, as well as losing him entirely from the company. I also hate when DC loses great artists to Marvel.

With that said, Felipe Watanabe managed to do a really good job on this issue. I am not sure if he will be doing the next few issues, or become the new series artist. But he did do an excellent job of bringing these characters to life. His style is very fluid, and has a good eye for detail.

My favorite part of the issue would be his fight sequences. He has a good handle on the action side of things.

Trevor Scott also did a good job on the inks. They didn't seem too heavy, and there was some very cool detail in there.

Dan Brown continues to make good use of his color palette. I really like the coloring on this book. The colors really pop, and the effects look great!

Cover Art - 3: Considering the scene depicted on the cover, doesn't actually happen in the book, I found it quite misleading. Also it looks very "cartoony". If I were picking this book off of the shelf to check out, this would surely not be my first pick.

Variant Cover - 4: I'm not a fan of the Teen Titans Go! animated series, so this cover did not appeal to me whatsoever. However, it is a good piece of artwork by Ben Caldwell, I liked the composition, and I am sure that people that do like the series will get a kick out of it. It seemed unfair to give this cover a lower grade just because I don't like the series.