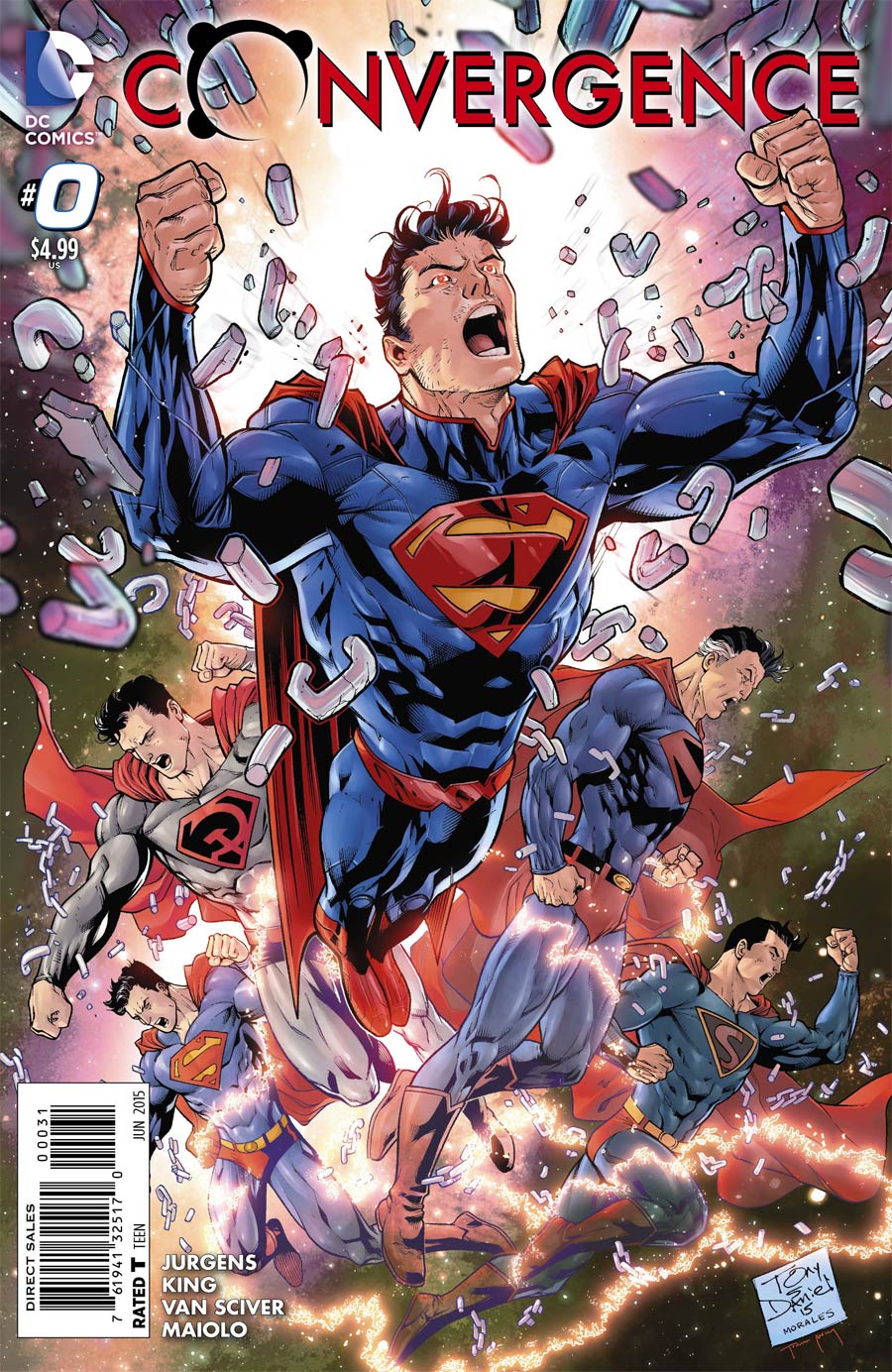 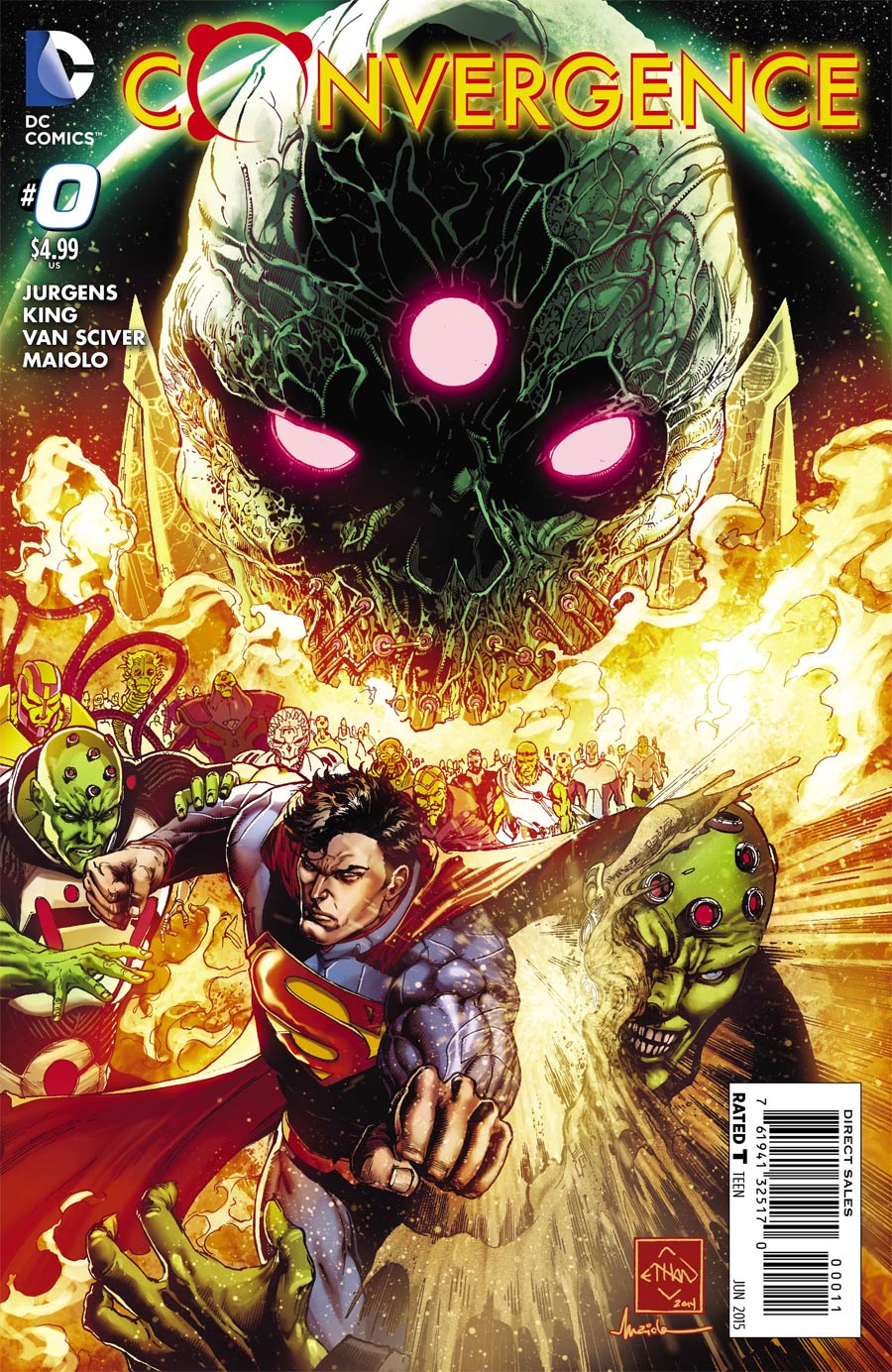 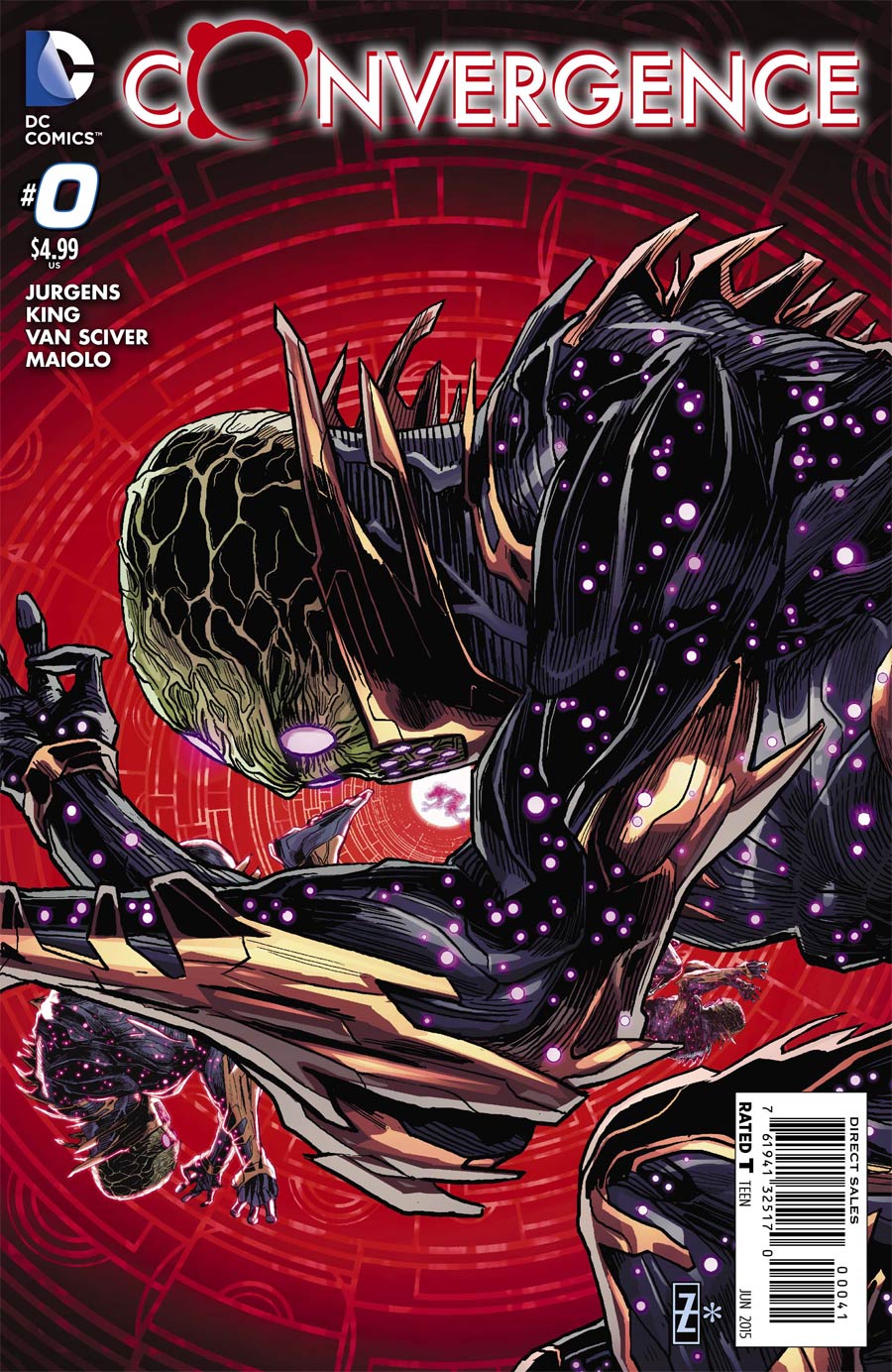 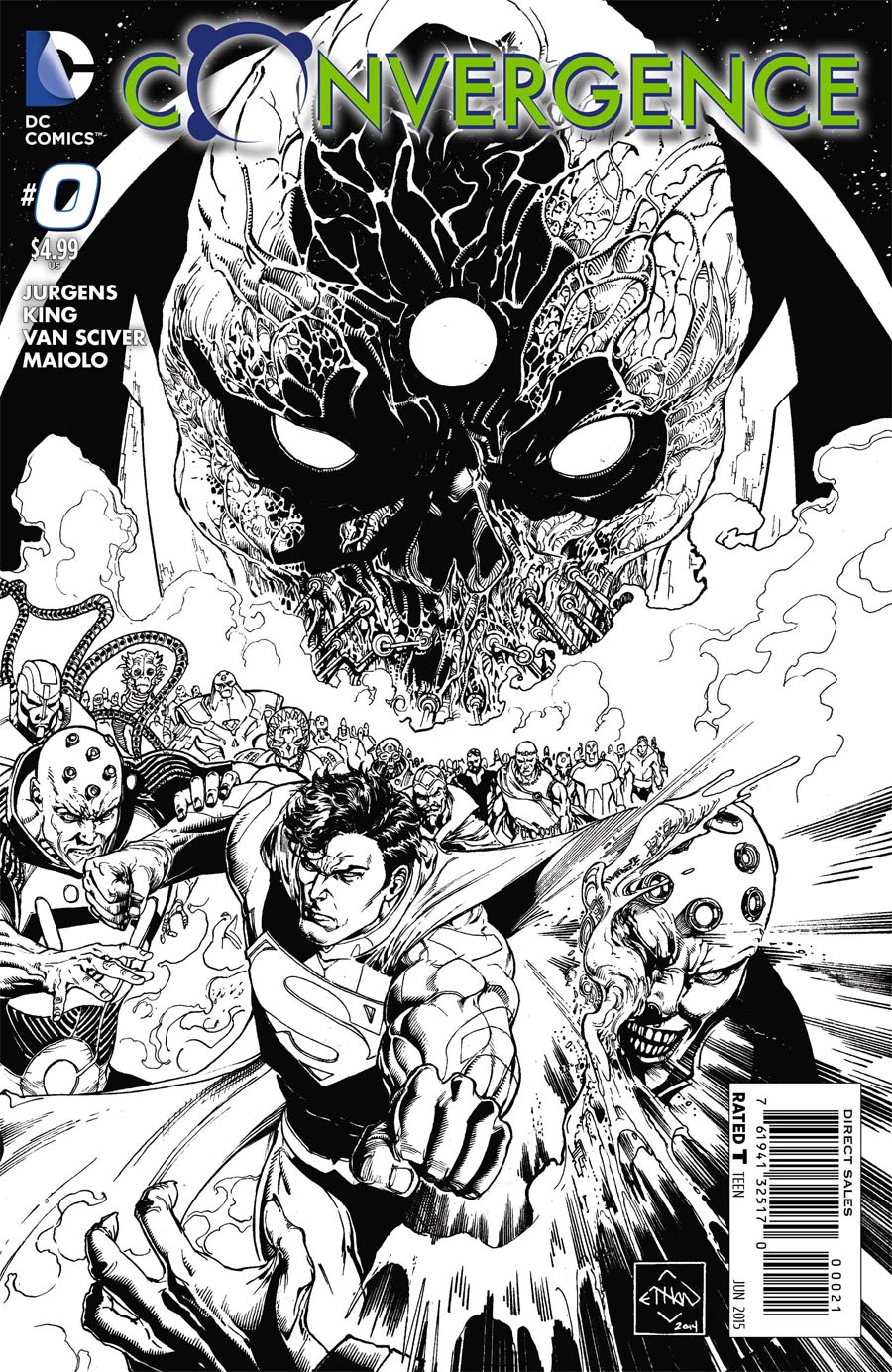 Superman is in an empty void. He does not know where he is, or how he got there.

He remembers being infected by the Doomsday virus, that Brainiac was behind it, and pulling both himself and Brainiac (Vril Dox) into a blackhole.

He is confronted by 'Omni-Brainiac' (a term I have devised for clarity's sake) - an impossibly large creature from which all other versions of the character extend from.

Vril Dox (the New 52 version of Brainiac) was an extension of Omni-Brainiac that served his purpose. To break Superman's resolve. To kill him, or be killed by him. (Spoiler: Superman killed Dox, off panel, at the end of 'Doomed' via blackhole).

Superman is chained up in an unknown location.

Omni-Brainiac tells Superman he has destroyed a "promising experiment." (Though he does not say, it may be Dox's plan to recreate the universe by mentally controlling enough sentient beings.)

Omni-Brainiac shows Superman all of the deaths he has experienced in various universes and timelines. (1994's Death of Superman, Earth-2 Superman's death in Infinite Crisis, his Pre-Crisis death in 1961's Superman #149, All-Star Superman's quasi-death, etc.)

Superman's rage manifests itself in a blast of heat vision. It does no good. Omni-Brainiac electrocutes him, informs Superman that he has the information about cities that he needs, and leaves to recover Superman's (New 52) timeline.

In a show of raw strength and power, Superman breaks free from his manacles. He escapes to find he is stranded on a barren planet, with no stars to guide him home.

He is confronted by what appears to be Silver Age Brainiac (His physical form continues to change, cycling through different versions of the character). In actuality, he is a physical avatar of the planet. A sentient, living intelligence. He is a servant to Omni-Brainiac and is tasked with ensuring the survival of Brainiac's collection of cities.

The avatar wants to know which city Superman belongs to. Superman questions his identity.

When he realizes that Omni-Brainiac has not come back with a (New 52) city, the avatar expels Superman from the planet. Superman does not belong yet. His memory is erased. He will remember all he has learned "when it is time."

Superman's questioning of the avatar's identity, and his master's plan, causes the planet incarnate to experience an identity crisis. He takes a unique form and name, Telos. He decides on a clear path. He will determine which city will return to the universe and which shall perish. Only the strongest will survive.

Story - 3: On the last of thirty pages, we are given the premise for Convergence. Each city will fight another for survival. A premise, that most readers already knew, or guessed. If this were a manuscript or screenplay, an editor would cut the entire thirty pages and tell the writer to start the story on page thirty-one. Which, incidentally, is exactly where issue #1 will start.

What's more, the main series will (apparently) focus on Earth 2 characters. Which further proves that this issue is pure backstory. It tells Telos' origin and (hopefully) excites the reader for the real story to come. To be fair, that is the purpose of a zero issue. But charging five dollars for a prologue, is not a practice the industry will be able to continue forever.

Jeff King, the series' main writer, was brought in with little-to-no knowledge of DC characters and continuity. The idea was that a new writer would be new reader friendly. An interesting idea, but if this issue is any indication of the story's ability to cut through confusing continuity and reach the outlying fans, it is one that will be a spectacular failure.

This is one of the least continuity free stories I have read in a long time. Even Superman readers may be thrown. The story starts immediately following the events of the Doomed storyline. But that was months ago. Not only may readers have forgotten that Superman was lost in space, having thrown himself and Brainiac into a blackhole, but there is no editor's note to remind and clarify. I struggled to understand many aspects of the story, and I have (in the past eight days) read the entire Future's End series and Superman: Doomed.

It seems every time DC attempts a multi-universal crossover event, they claim it will simplify things, when in reality, it confuses readers and muddies the waters of continuity.

I do not have a problem with Hollywood writers coming into the comic book community. But King's TV background shows. This script is very wordy, with little action. (More on the difficulty Van Sciver had as a result, later). Here, like in TV, the dialogue is supposed to move the plot along, and the plot is supposed to reveal character. But for all the monologue and dialogue, King (and Dan Jurgens, to be fair) move the plot along too slowly for anything to be explored with any depth.

With plenty of pages, they have the opportunity to do more. (Again, at a $5 price tag they had to hit a high page count). But the team clearly had a preconceived idea about where the story would begin and end, and padded the middle when needed.

Perhaps showing the Superman and Brainiac fighting before the issue started, would solve many problems of pace and clarity.

But it's not all negative. The Telos origin and backstory was interesting. And if nothing else, it was nice to see a big event, not only focus on Superman, but spring (ostensibly) from a storyline originating in his main titles.

Superman, like in Infinite Crisis, was almost explicitly said to be the center of the multiverse. The highlight for Superman, and likely all DCU fans, was a two page spread focusing on the deaths of Superman. We were also treated to multiple classic versions of Brainiac. Fans love when different ideations of character and story are juxtaposed or revealed to the characters themselves. It was nice to see a lot of that here.

As continuity-laden, expository, wordy, and confusing as this issue was, it has received a mostly positive reactions from fans. I cannot blame them. For the next two months, DC will give the readers exactly what they want. Their old characters, continuities, and universes. With opportunities to comment and question. Who will fight? Who will win? And what world will survive the convergence and regain access to the multiverse?

I wonder if what the editors say will hold true. Will story trump continuity? Will the writers be free to tell whatever story they want? (And will they prove themselves worthy of the responsibility?)

I was disappointed by the false start that was issue #0. But I must admit, I am excited to see what will unfold in this series, and in the DC universe to come.

Art - 4: Ethan Van Sciver does the best he can, but is hamstrung at every turn. He is dealt a tough hand with King and Jurgen's verbose script. He counterbalances the endless barrage of discourse and conversation by zooming the camera in and out. By doing so, he creates badly needed contrast where there is none.

Unfortunately as a result, there are panels that suffer from lack of detail or sharpness. Characters are sometimes too small and can look a touch sloppy. Also, Van Sciver inks himself. This adds to the heaviness of his lines. But again, much of the problem lies with the script.

EVS even lacked for exciting backgrounds to play against. The writers called for a black void, a starless sky, and a barren wasteland. Even the domed city of Metropolis was meant to be an empty and lifeless cityscape.

I would have loved to see better shots of the various Brainiacs, but with the character having little to do, there was not much for Van Sciver to detail, or focus on.

The artist seemed to ape Perez, Ordway, and Jimenez throughout the book as a nod to Crises past. Not only was his two page spread of the deaths of Superman an instant fan favorite, but he also took the care to mimic the styles of each of the artists that made the scenes famous.

For all his class and effort, I cannot give him a five. He simply does not jibe with his writers. It may not be his fault, but it is a problem that I hope is solved quickly.

Cover Art - 4: If you are a reader who likes a cover to be a literal representation of the story inside, then this is the cover for you! Superman, a bunch of Brainiacs... doing nothing in particular.

Seriously, the artwork conveys a CRISIS level feel to the story. Countless Brainiacs, one Superman, and the Omni-Brainiac lurking behind it all.

I would have like to see better color and detail work in the mid ground. But this is appropriate for the story, without falling back on a cliched Superman vs. Brainiac cover.