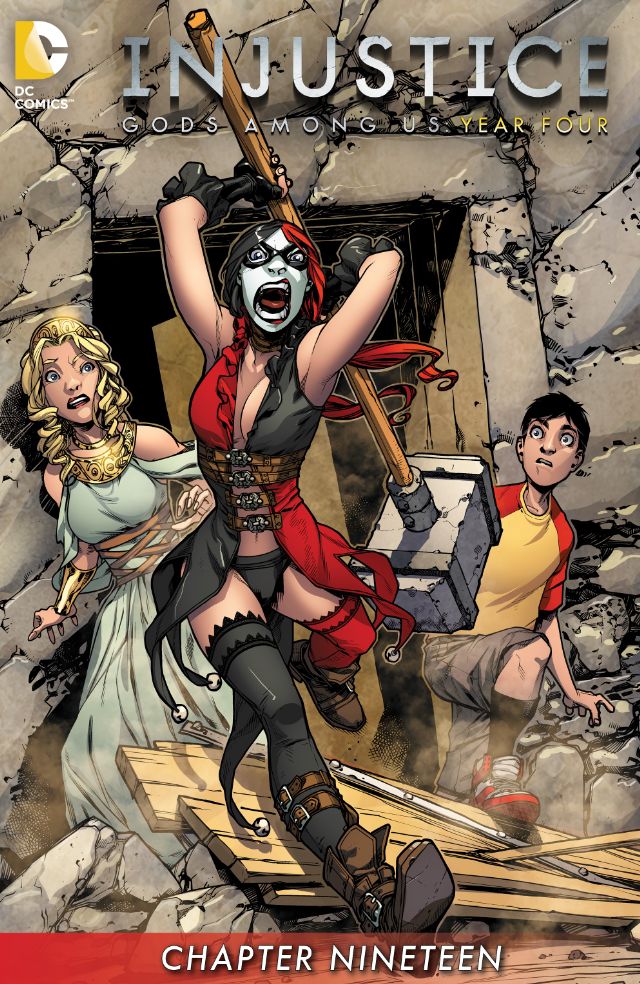 Click to enlarge
Harley Quinn and Hypollyta fight their way through the shades of Tartarus, and then, after ingesting a super-pill, Harley leaps to safety, only to have to fight a hecatonchire. Harley dispatches the creature, and the trio are then visited by Ares, who has just made use of a boom tube. Hypollyta distracts Ares, while Billy secures the Mother Box, that Ares has carelessly left unguarded. The trio escape Tartarus, only to be boomed to another location that looks equally horrid... if not worse.

Story - 1: Buccellato is trying really hard for a donut, and he just may get his wish with the story he's on about. The amount of slapstick, plot armor, and Deus ex Harley Quinn in this installment is just shameful. If you don't have a story to tell, that's one thing, but to be so pedestrian in the attempt to cover your bottom is distasteful to say the least. It's an obvious ploy: Harley is popular, and very hot, right now, so insert her in as an interlude/sub-plot of the non-existent story. No one will mind or complain, it's Harley, right? So long as she's up to her usual shenanigans, everything will be fine. Wrong, wrong, wrong. It's one thing if readers no longer care about quality, and just continue on reading mindlessly, in lock-step OCD fashion, that compels them to consume Injustice inexorably, however, Buccellato still owes something to the quality of his own work. Perhaps that concern is misplaced, and there is more to come that will salvage this dreadful account, but with a handful of issues to go, it's obvious that there will be no saving of Year Four, which has been padded tripe since issue 5.

And still they read. Harley Quinn decimates mythical creatures that would give Heracles and Superman a time. She displays abilities that the super-pill doesn't offer. And still they read. Ares is a god, and travels wherever he chooses with no need of a Mother Box. That technology is a staple for the Forth World gods, not the Olympians. He conveniently drops the Mother Box, thanks to the ridiculous efforts of Harley Quinn. There is no escape from Tartarus, boom tube be blasted, unless Hades bids it so. Anyone can enter, but leaving? That's what Cerebus is for. Thankfully, Buccellato, couldn't tell the difference between a three-headed dog and a 50 armed giant, as I'd be ready to light something if she had done that to Cerberus. And still they read. And still we read. What else is there to do? Is there a Superman comic to be had that is being published which I can enjoy? Truth be told, no. Is there anything that I can look forward to from DC that isn't just a disappointment? For the most part, no. However, Injustice has been able to maintain my attention, if only for its ability to produce a baseline serial that actually produces interest in seeing what malarkey occurs next time. It's Batman 1966, without the farcical quality that made fun. It's Golden Age Plastic Man, without being the slightest bit funny. It's Super Friends... if you take away every single thing that made Super Friends good. Regardless of how Year Four ends, and it will end poorly, we will be here reading it, and waiting for Year Five. That's how bad it is in the DC Universe, which, for one time, is worse than the world we abide within.

Art - 3: Again, adequate, but what else can you expect with this story?