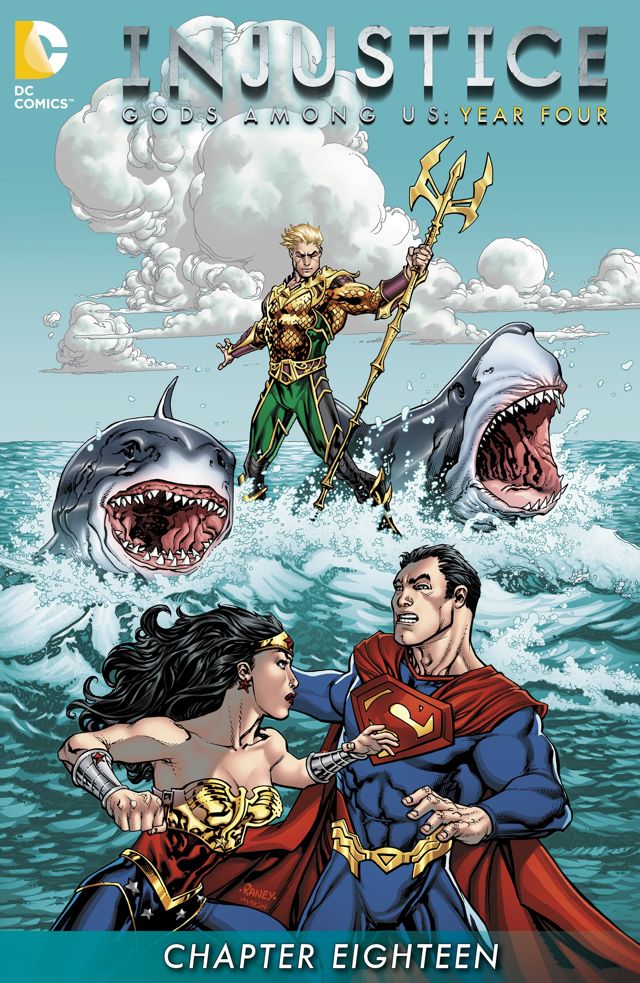 Click to enlarge
Ares confers with an undisclosed speaker, who wants "the Kryptonian" delivered to him. Unbeknownst to Ares, a tracker has been placed on him by Lex Luthor, who is in cahoots with the Batman. Batman and Luthor trade notes, but are interrupted by a scream. The stand-off with Poseidon continues, until Poseidon strikes Wonder Woman, and fighting commences anew. Aquaman contends with the Lord of the Oceans, and dispatches him with the aid of a great white shark. However, with Poseidon gone, Mera can no longer hold back the tidal wave, and it descends, engulfing Olympian and Leaguer alike.

Story - 1: What an awful installment. The introduction of an unknown player is theft of Year Three's storyline, and Year Three was a terrible storyline. So unknown figure wants Regime Superman, and of course, no one knows about it because they're all to busy fighting... except the Batman who has created tracers that cannot be detected by gods, and can track otherworldly beings even when they exit to other worlds. However, the pièce de résistance was watching the ludicrous fight between Aquaman and Poseidon. Poseidon, who trumps Aquaman's abilities in every way imaginable, is swallowed by a great white shark... or was that a megalodon? It would fit in this anachronistic tale, perfectly. Regardless, as Poseidon is master of the oceans and all who inhabit it, that would include the shark that swallows him. It would also include Aquaman and Mera. Why he throws punches with either of them is absurd. Somewhere, Odysseus is reeling: "I was beaten about with the full force of the oceans, and that verdigris dandy gets to duke it out? Where's the justice?!" The rest of the story is just etiolated and indolent.

"To Be Continued!" I actually laughed out loud when I read that at the close of this issue. Injustice has been on that track since Year One, issue one. To its credit, like Batman 1966 from the days of yore, the book you keep coming back for whatever your reasons may be. For myself, I do want to see who the unknown player is, and the plot holes that the introduction will cause. I also want to see how Billy regains his powers, now that he's angered every god that powers him, except two. I want to see if Regime Superman can return to being the despot that he was formed to be in Years One and Two, and stop being a sad faced dullard for Wonder Woman to whip on and chastise. Lastly, I'd like to see what becomes of the Greek pantheon. Do they go the route of the Green Lanterns, or could it possibly be worse. My curiosity notwithstanding, Injustice is still as poorly written, specious, fulsome, and unctuous story as they come. However, what else is there? Like the song says: "If you can't be with the one you love/Love the one you're with,"... or in this case, thoroughly dislike them. In a DC Universe that has all but abandoned its values, and rendered the greatest heroes of the cosmos ever assembled into facsimiles of wastrel scat, Injustice is the closest thing to a standard amidst these times of flux and puckery. For those who hate superheroes and what they stand for, this is the book they've been waiting for and it delivers all the dysfunction they can consume. For those that like superheroes, it can be taken as an Elseworlds, and enjoyed for the ridiculous send-up it is. Thankfully, there is no middle ground.

Art - 3: Adequate, which is par excellence for this series these days.

Cover Art - 3: While the colors and conceit are appealing, this is a stupid cover. Regime and Wonder Woman look cut and pasted in, and Aquaman isn't even standing on the sharks he's supposedly riding. Sloppy. Lazy. Amateurish.