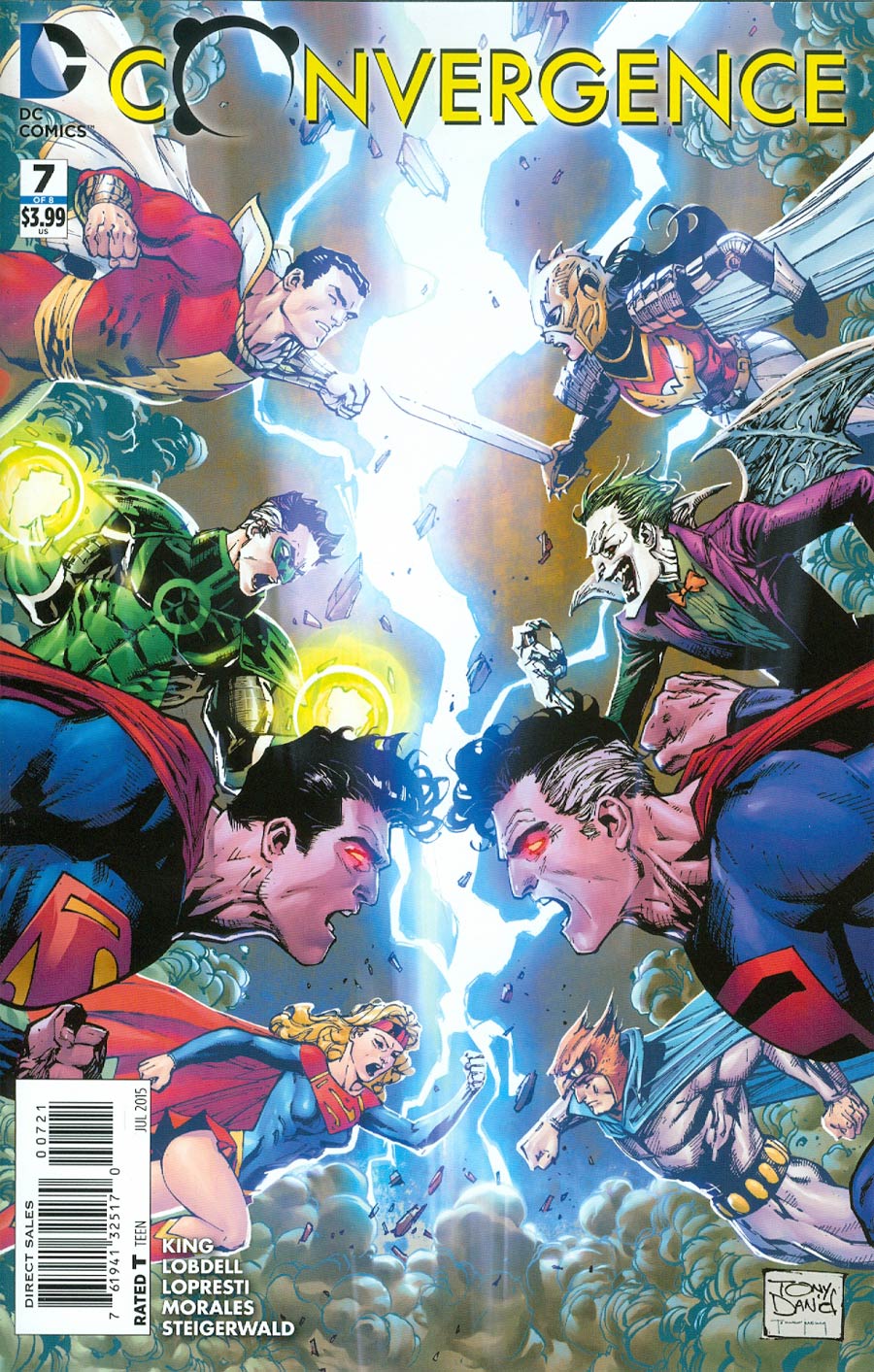 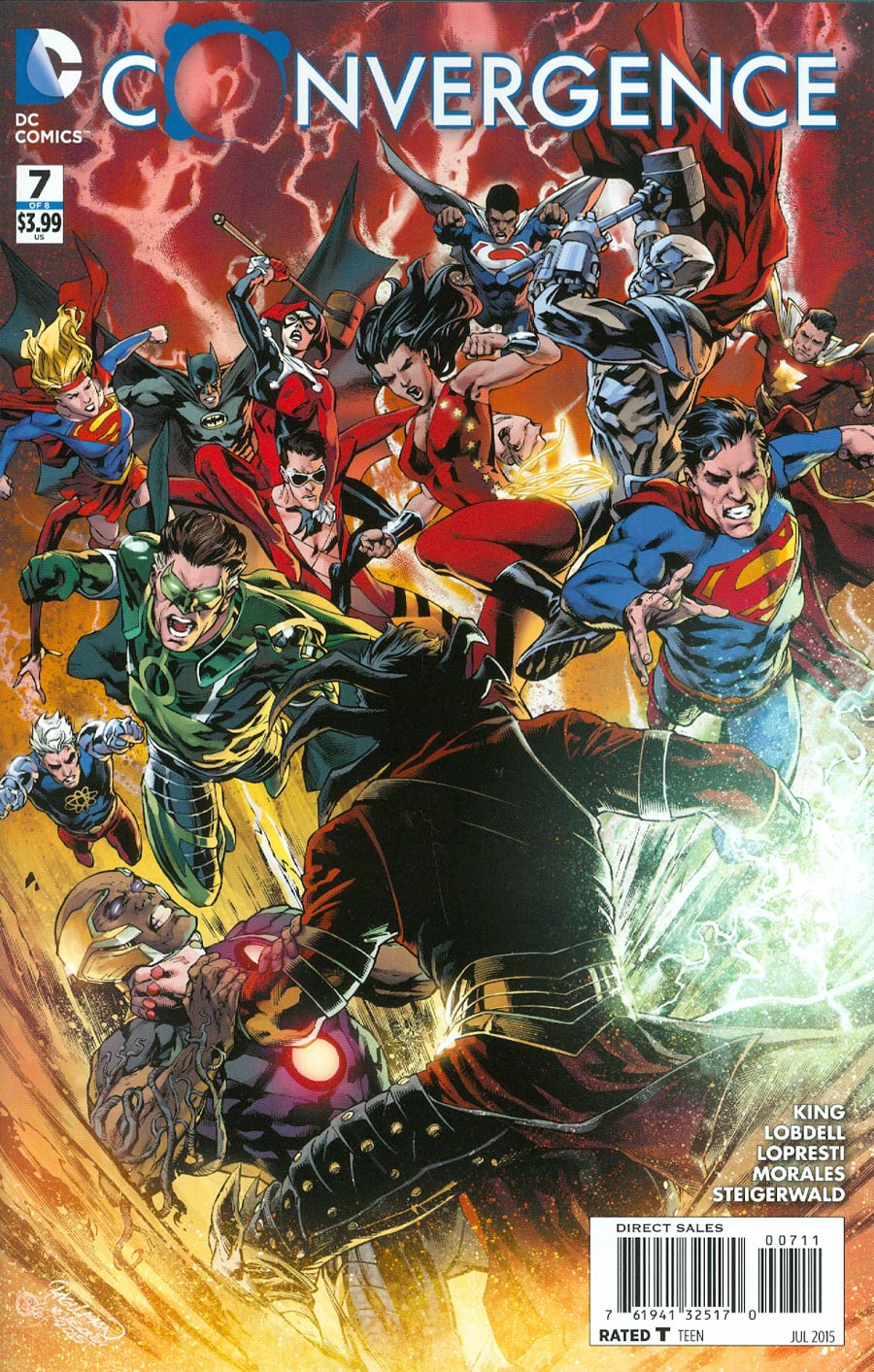 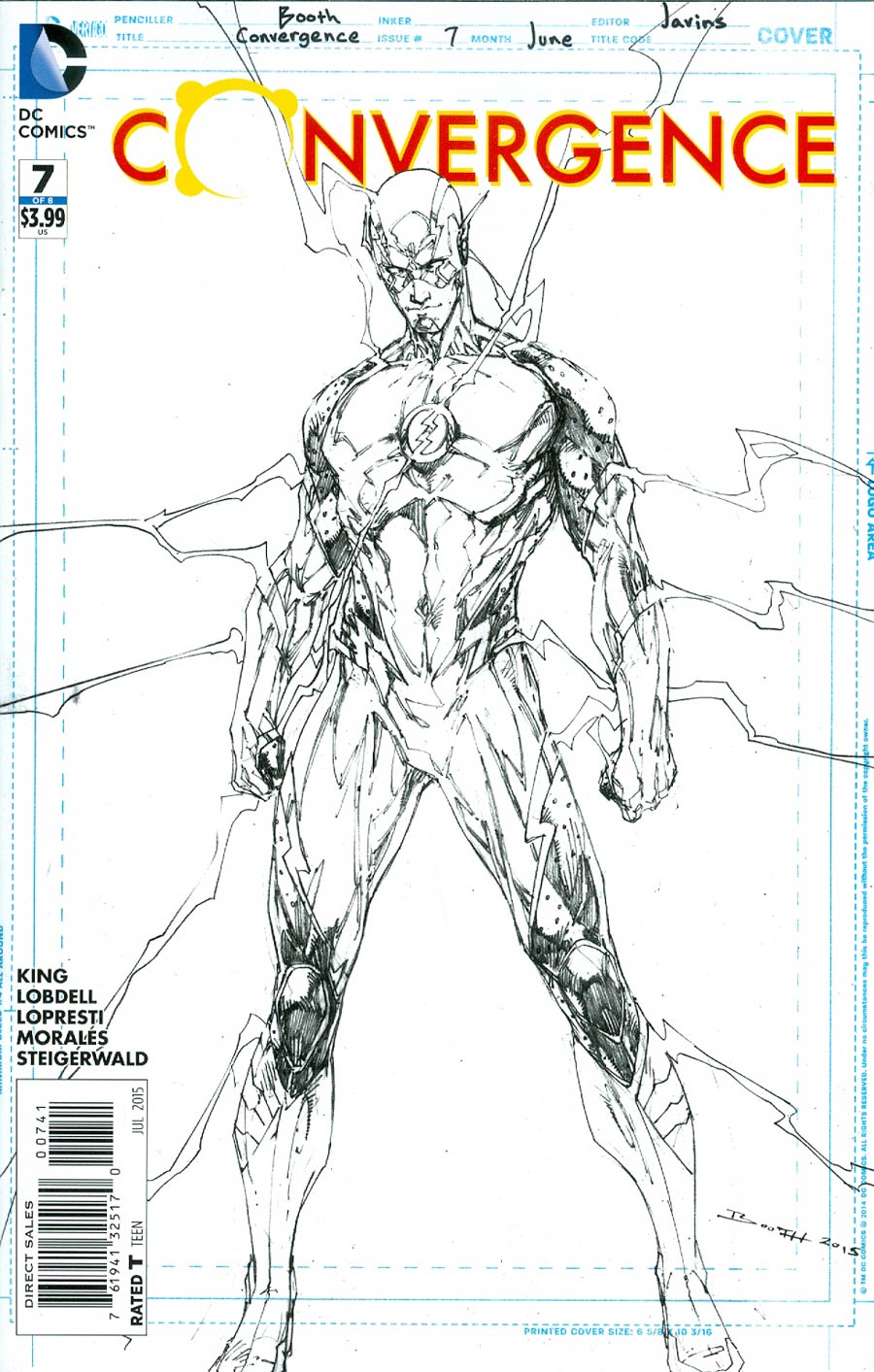 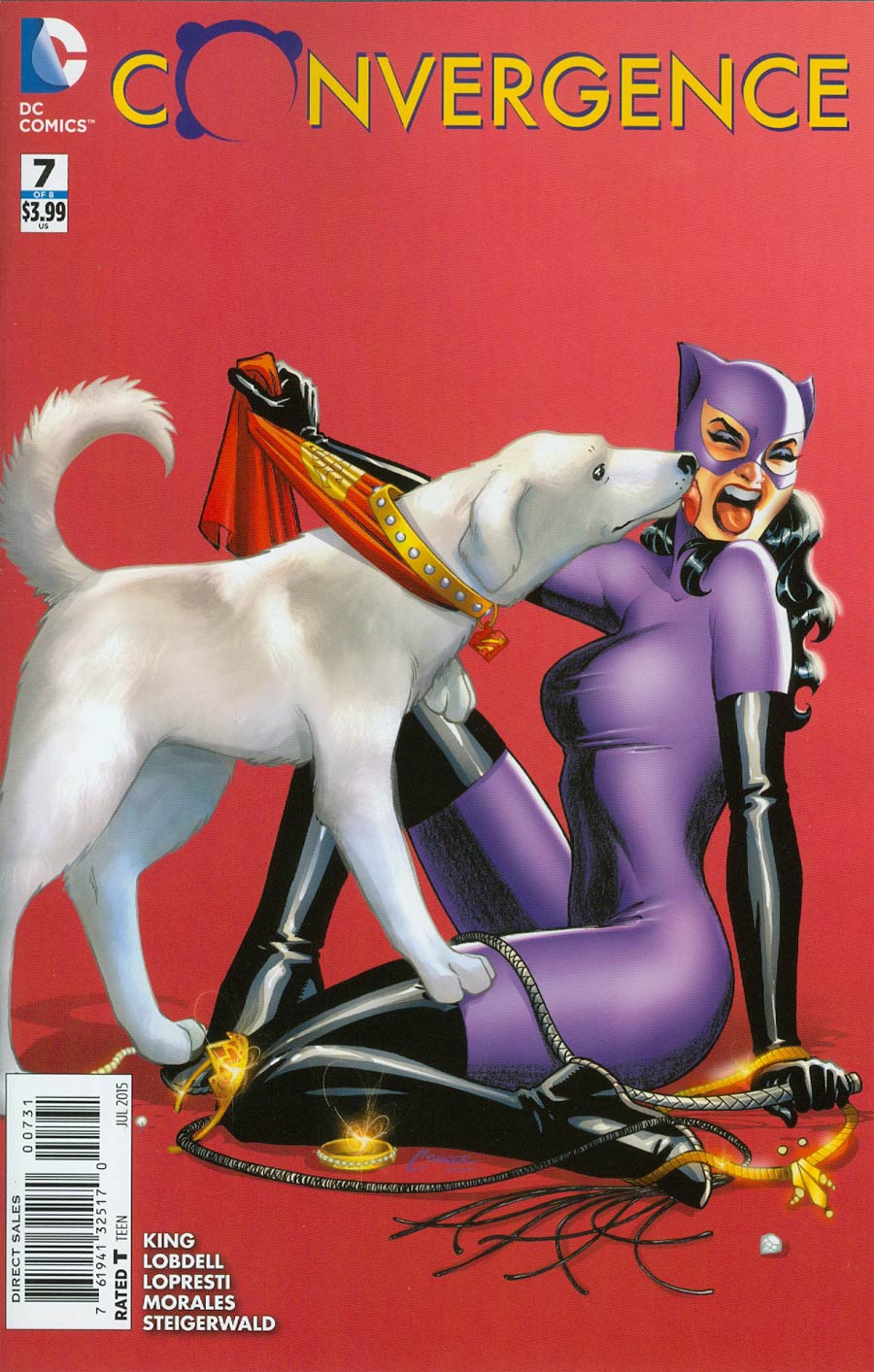 The reemergence of the planet Telos into the universe has caused temporal and antimatter energy fluctuations.

The Oracle, who can usually see the past, present, and future, is blind to it. He retreats to prepare for his death.

On the planet Telos, the Earth 2 heroes and their recruits, fight Deimos and his enlistees.

Telos, the individual, burrows out of the ground, and joins the fray. Deimos is startled, but fights back. He unleashes an inconceivably large energy blast. His battle cry of 'DIE!' is heard in the vacuum of space. (Yes, really)

The blast is so charged with temporal energy, that it disrupts the vibrational divide between universes. Superman, Supergirl, and Martian Manhunter each see four different versions of themselves.

Back planet side, Telos and Deimos battle in an energy bubble. Pre-Zero Hour Parallax (white-at-the-temples, Hal Jordan) tries to stop Deimos, but is rebuffed.

Yolanda tells Grayson and the others that Deimos is planing to kill them all, whether they have obeyed him or not. Kingdom Come Wonder Woman confirms this by using her ability to discern truth.

Huntress, Hawkwoman, and Cheetah attempt to help Telos. They are killed as soon as they touch the protective bubble.

Yolanda tells Deimos that she can smell his fear. This distracts him enough for Telos to envelope Deimos, and his allies, in liquid metal.

Telos wants to know his true name. Deimos refuses to answer. He bucks the encasement and binds the heroes with bands of energy.

Having had enough, Parallax (Hal Jordan) blasts Deimos with his ring, killing him. As a result, the immense amount of temporal energy that the sorcerer had stored up, is released.

The energy creates shockwaves into space. The Oracle says he can see 'it' now. But tells Superman his future is unknown.

All of reality is breaking apart.

Story - 2: Somewhere along the way, King has learned to (slightly) better hide the padding of his wafer-thin story. Over the past few issues, he has used more and more two page spreads. In this format, the panels get bigger. Fewer panels take up more room, but give the illusion of density. Since readers see two pages at once, there appears to be more going on. Even though the panel count has dropped.

A typical twenty page comic contains about 100 to 120 panels. This issue is twenty-eight pages, but only has 88 panels. This edition of Convergence has some nice moments, but is still light on story. The last page being the only thing worth remembering.

If all a great story needs is an intriguing cliffhanger, most writers in this industry would be on par with William Shakespeare. But unfortunately for King, every page should be important.

The only meaningful or resounding event is Telos' death and the repercussions of it. The rest is insignificant. Set dressing. Though not by design. King tries to balance the preceding bland and uninspiring issues by conjuring up additional conflicts. However, these trite schisms are forced and disingenuous.

It begins with King adding in a hollow threat. The Oracle momentarily (and perhaps accidentally) threatens the Justice League. Nothing comes of it. Because nothing can come of it. Oracle and the JLA are not on opposing sides. It is a cheap ploy to create tension where there is none.

We see a glimpse of Superman saving Apollo and the Engineer. But saving them from what? The panel has no context. Nothing before, or after it, to explain what is happening. A selfless and heroic shot of Supes is alway nice to see. But "contrived" would be a complimentary way of describing the panel.

Supergirl and Captain Atom debate whether to trust Telos. This happens while Telos is fighting their mortal enemy. What is there to discuss? And what more does Telos need to do, to prove himself? He is literally punching Deimos in the face. They have nothing to lose by letting them fight. And of course they do. This is just another faux problem King slaps together in order to hit the requisite page count.

The inevitable clash between forty cites is finally delivered. And what do we get? A fight that has no bearing on the outcome of the story. None.

But the biggest conflict, contains the biggest flaw. Telos and Deimos. Though the fight is too short and far too simple, it is important. That is, until one notices the gaping plot hole.

Deimos has absolute control of history: past, present, and future. In other words, he has the ability to accomplish his goal. To rewrite all of existence. He has no reason to delay his plan. Yet, he continues to toy with the inhabitants of Telos. Though the in-story explanation is given (Deimos has yet to realize the full extent of his power) the real reason is different. King has promised a battle royal-like clash, and has yet to deliver.

But how could Deimos not understand the breadth of his chronal powers? He acquired it for the specific reason of rewriting the multiverse.

A skilled writer can direct readers around plot problems. But King tries to explain it away through a line of dialogue. As a result, he draws attention to the plot hole. Making it worse.

This does not even touch on the idea of Deimos gaining strength from people's deaths. An ability that was never an aspect of his power previously. (Brainiac also has a sudden new ability. Making a man omniscient and all powerful.) These changes in long standing characters are not added to create depth or interest. But rather to serve a plot point. One of the worst reasons to change a character.

By the end of the issue, we are tantalizingly close to a (semi) new DCU. It is interesting, and exciting. For that reason alone I thought this story would be a 3. But from week to week, whenever I take a closer look, the at-first underwhelming story, is always worse.

Art - 3: Like fiction writing, one of the most important traits of sequential art, is clarity. There are few things more frustrating than struggling to decipher an obscure image. Lopresti does fine work, but a lack of visual context muddies the flow.

Cyborg and the Justice League are on the JLA satellite. The Oracle seems to be phasing through the space station hull, for some reason. He is creating a gravitational pull - a pull that pushes - the heroes away (gravitational push?). I never quite figured out what was going on, or more importantly, why it was going on.

I mentioned Superman's rescue of Stormwatch above. We do not know why the characters are in trouble. Or why they are unconscious, or in need of saving. This is probably King's fault. If the script does not call for a specific setting, there is little the artist can do.

But someone, whether the artist, or editor, needs to point out the lack of context in these, and other panels.

Huntress, Hawkwoman, and Cheetah all die in a single panel. Lopresti chickens out with a silhouette shot. Here the problem is the reliance on too much context. If not for the surrounding panels, we would not know what happened to the heroes. If King plans on killing, he needs to allow his penciler more room to do it justice.

On the whole, nothing is rushed. Nothing is sloppy. No flagrant fouls.

He is not a '5 out of 5' type artist, but Lopresti is solid, dependable, and pleasing. The problem: He is paired with a writer who still does not understand how to tailor a script to both story, and artistic needs. Therefore, Lopresti deserves a pass on most the problems listed above. But art problems are art problems, regardless of where they originate.

Cover Art - 4: This is a penultimate crisis-like event cover, if I have ever seen one. Red skies, lightning, and a glut of warring characters. It is not a bad cover. But it does highlight the objection I have to these types of stories. There is little subtext, subtlety, or finesse. It is difficult to critique such a story, or to examine such an image.