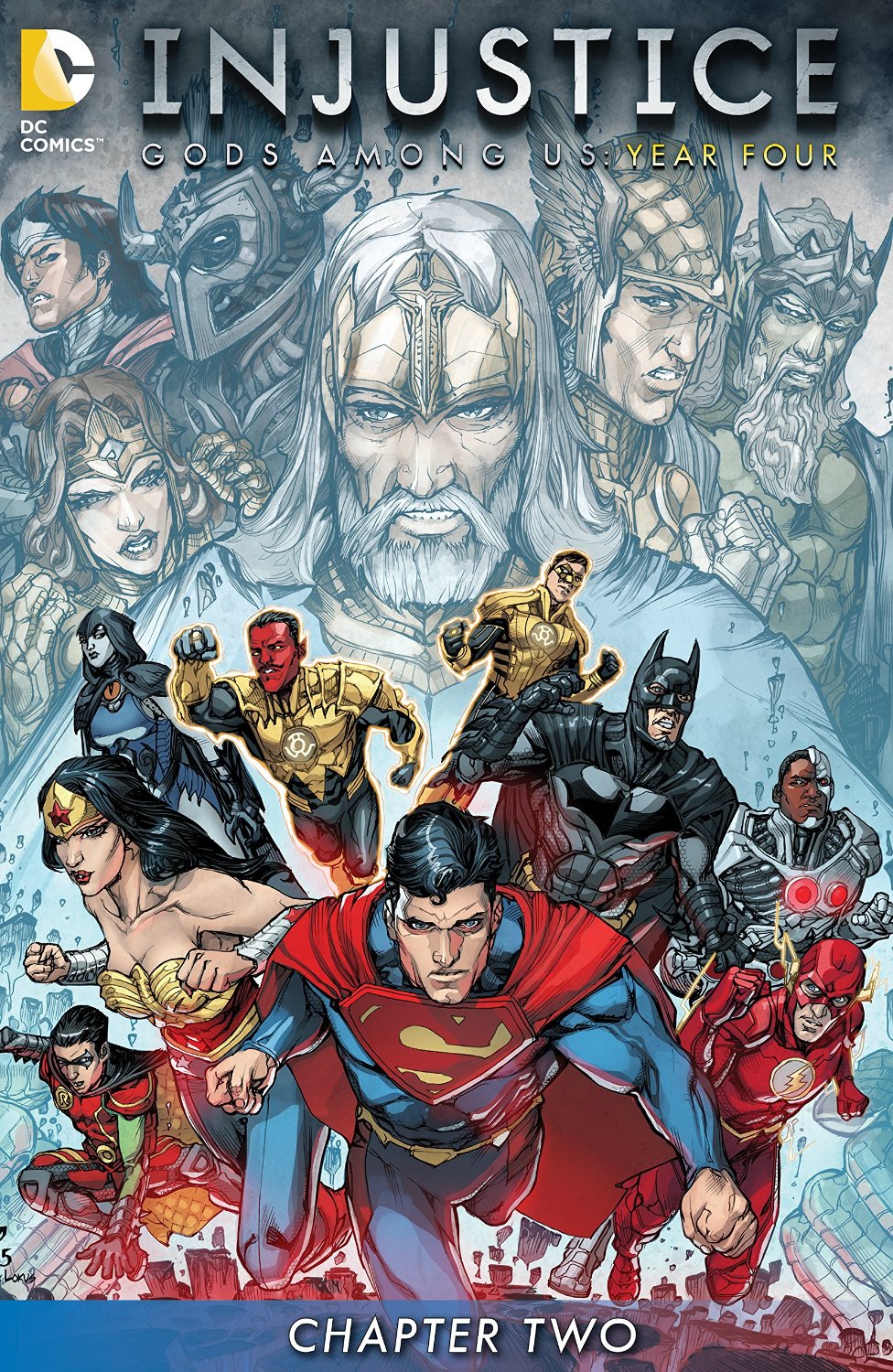 "What Fools These Mortals Are"

Click to enlarge
10 years prior, Officer Montoya and Detective Sawywer go in without back-up or a warrant to save abducted children. They find a band of devil-worshippers and things go bad from there. Huntress rescues the duo, and Montoya is brought out of her reverie into the her and now, but Batwoman questioning her. Montoya has been drinking heavily, and is just learning that Selina Kyle, Catwoman, is leaving the Insurgency. There has been no movement, and Selina no longer believes in the Batman. Montoya believes that Batman is a coward, unwilling to do what is necessary and decides to take matters into her own hands. Montoya attacks Cyborg and Robin while they walk unaware. She dispatches Cyborg, and after beating Robin, uses him as bait to draw out Regime Superman. Elsewhere, Harley Quinn is bored, and has decided to stalk Billy Batson.

Story - 3: The analepsis used to start the story doesn't fit well with Montoya's actions... unless it was used to demonstrate her poor decision making abilities. Montoya and Sawyer get into a dangerous situation, not because it's thrust upon them, but because they enter it unwisely. The same can be said of Montoya's decision to attack Cyborg and Robin, but a wee more on that, later. Of more importance is the Batman's clear failure of leadership in this quite dire situation. It's hard to believe that Batman has continued his obstinate and clandestine ways with the only support that remains to him. While it's obvious that this is the case, it's an untenable position to maintain in this situation. Leaders have to do more than guide and direct, they also have to inspire. It's not enough that the Insurgency fights for the right, they must continue to believe that their cause is just, winnable, and worth the struggle. Regime Superman may be the villain, but he's energized his League just enough to... actually, no, Regime is a horrible leader as well, since they continue to have him waffle between despot and misunderstood antihero. The lack of leadership leads to decisions like Montoya's, which is highly questionable, as she threatens the Batman's son, which should draw both of them into the fray, and paints the Insurgency as something which it isn't supposed to seem: a rash band of villains willing to threaten children, even if that child is Robin. The fight Montoya engages in is risible, as Cyborg needs a serious upgrade, after having been dropped by both Commissioner Gordon and Montoya, yet if Robin hadn't taken the pill, he should be death from the injuries his must sustain. However, if he has taken the pill, why can't he do any damage to Montoya?

Harley Quinn's attraction to Shazam (yes, I submit, but only because this character doesn't deserve the name) needs to stop. I'm not sure just how open the readership is, but Billy is still a youth. A youth who must have the worst kept secret identity next to Bendis' Daredevil. The irony is that he should have the best one, as he honestly is two different people, and no one would logically thing that Shazam is truly a transformation, such as it is. Instead, everyone knows who he is and the magic word to boot. Harley pining for Billy outside of his classroom is just too pederast, paedophile, and twisted to believe. Doubtlessly, Harley is a character that can push boundaries, but this? No, nay, never. A psychopath stalking a kid right outside of his school window? I suppose I shouldn't be disgusted, as this is a world of dysfunctional heroes, a world where Superman kills, and the Justice Leagues follows him blindly as if they were lemmings, but at some point you have to ask how this helps the story. Harley is popular and that means she'll be used, but is this the best way? Forget about right, I don't expect ethics or morality from this series, but is this the best way that they character can be used? Are ideas that short on supply? At the end of the day, the readership will make that decision, but the telling thing is that such a scenario could be presented to readers in the first place.

Art - 4: Solid renderings, especially the shots of Montoya whee she looks like a steroid ad for PEDs.

Cover Art - 4: If you'd never read Injustice, and saw this cover, what would you think? Yeah, that's what I thought.