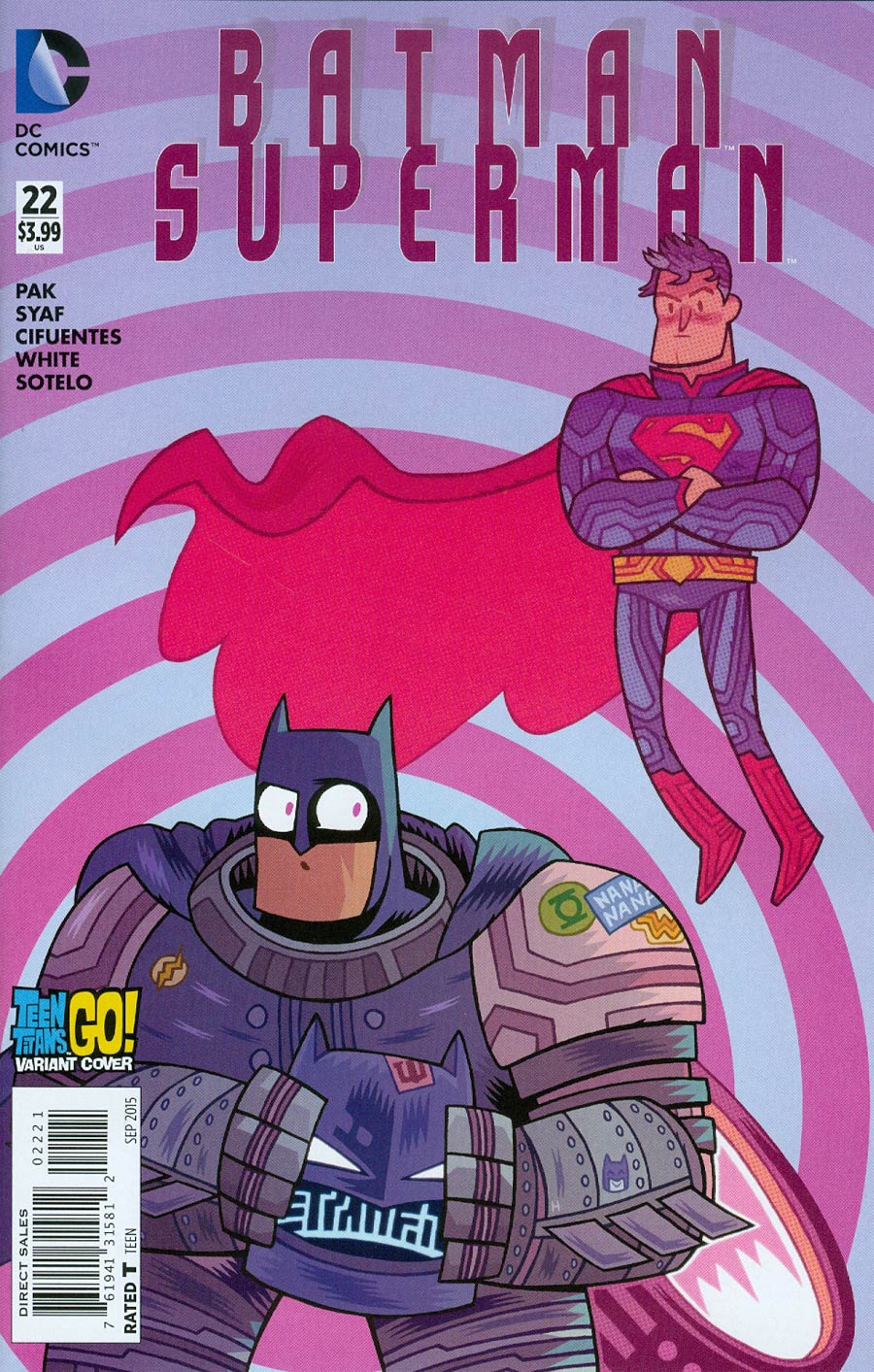 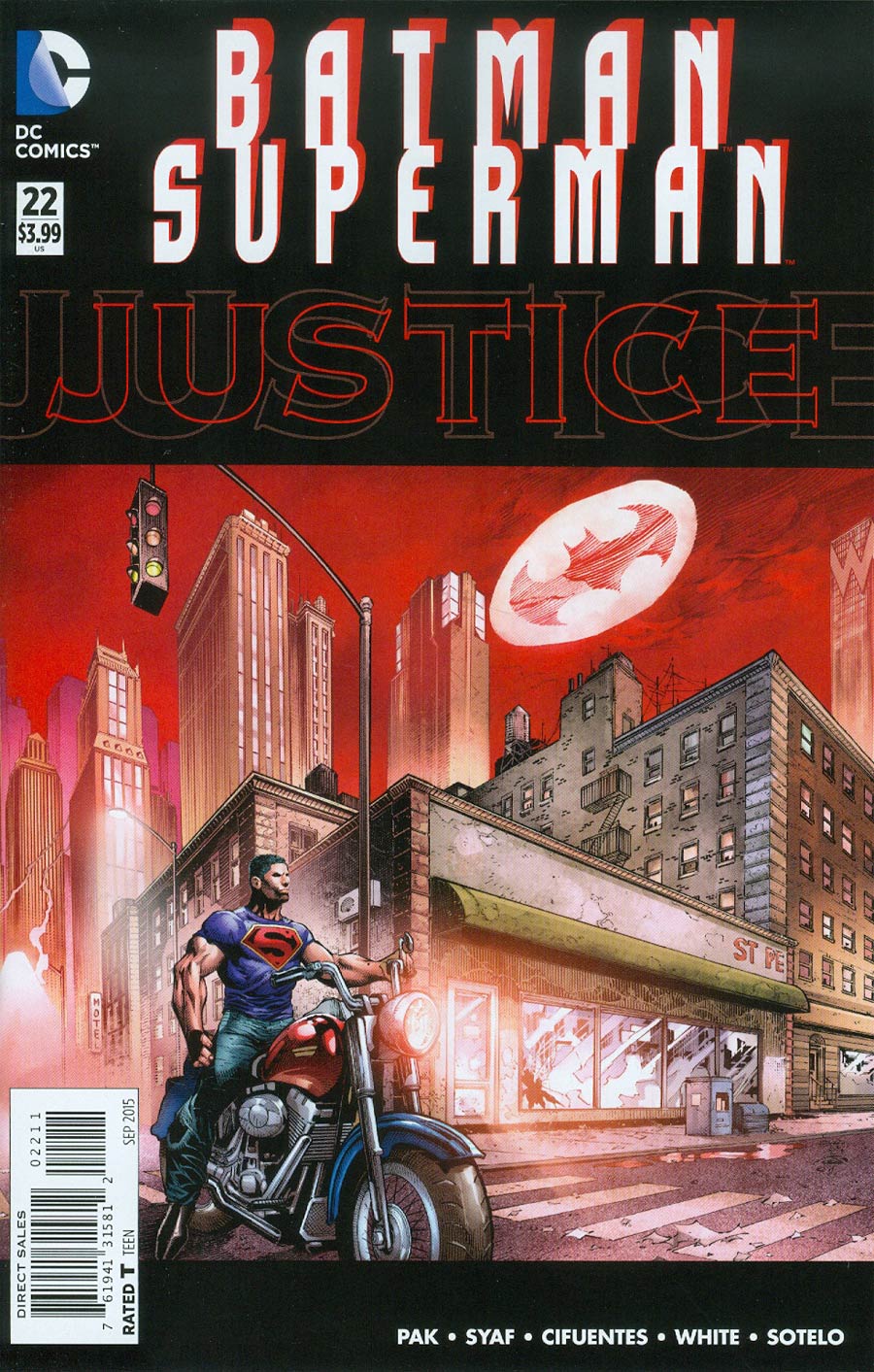 Click to enlarge
Jim Gordon, aka Batbunny... I mean Batman, is trying to arrest a depowered Superman.

And it's not going well.

Meanwhile, Superman discovers his mysterious enemies are using weapons that absorb energy. Thus, the reason his powers are deteriorating. He tries to explain this to Batman, but Gordon is having none of it. He is highly suspicious of Superman. And nothing Superman does alleviates those suspicions. Gordon flat-out does not like, nor does he understand, Superman.

After all, the real Batman has way cooler toys.

But Superman decides that he has to work with this new Batman to save lives. This mysterious villain is trying to get rid of Superman for a reason. Those reasons are unknown, but Superman won't stop until he knows who the villain is, and what they want.

And Gordon has no choice. Superman is along for the ride.

Our 'dynamic duo' soon head for the Gotham Waterfront where a Wayne Industry Warehouse is about to be attacked. Lucius Fox reveals that they are housing an artificial mini-sun at the waterfront location. Fox suspects that it is a group called Dawn Command who has been attacking experimental energy projects around the world. So far, no one knows who they are or why they want the energy.

But alas, it is not Dawn Command who is attacking Wayne Industry, but it is the super-villain Ukur: Beastlord of Subterranea! He's angry, and he's brought his pet dinosaurs with him.

Ukur, Superman, and Batman fight it out. Ukur is momentarily defeated and descends back to his subterranean world, promising to return topside to destroy Superman's world. Superman follows determined to make peace and save Earth.

Story - 4: The Good: Superman does have moments when he isn't acting like a wannabe Punisher. He tries to reason with Ukur. For one moment, Superman acted like an adult instead of a 'swing-your-fists-first' teenager.

Gordon does not have the analytical mind of Bruce Wayne. I like the fact that no one can truly be Batman, except Bruce Wayne. Putting on a 'Batman suit' doesn't make you Batman. This story clearly demonstrates that. Not that Gordon is a bad person, but, as Superman points out, he clearly isn't Batman.

I also like the fact that Gordon and Superman do not mesh well together. As Gordon says, they are too much a like. Bruce and Clark are a totally different team. They know each other. For instance, Bruce would have known that Clark was sincere when he was trying to reason with Ukur. But Gordon didn't have a clue. He's a victim of bad press and bad assumptions. Bruce doesn't believe what he is told by others. He comes to his own conclusions. For years, he has watched Superman, and he knows who Superman is based on his own observations and conclusions.

Clark Kent may be a depowered Superman, but he is still tenacious. Superman never gives up. Never.

The Bad: S.T.A.R. Labs got broken into... again? Really? How surprising. Does no one know how to put a lock on the S.T.A.R Lab doors?

Ukur: Beastlord of Subterranea just pops out of nowhere. I mean... really? It's a rather weird plot point. And it irritates me that, while writing this review, my spellchecker keeps trying to turn the word 'subterranea' into 'subterranean' and 'beastlord' into 'beast lord.'

The name Ukur: Beastlord of Subterranea does not strike fear into the hearts of comic readers. It just makes me laugh.

Conclusion: Having a faux Batman makes me long for the real one. Never thought that would happen.

Art - 5: As much as I hate Superman's unshaven look, I cannot fault the artwork. The colors are rich and the action jumps off the page. Ukur's appearance on the scene is awesome. In that splash page, you can see Ukur's rage and hear his dinosaurs' roars. His name may make me laugh, but his image is terrifying.

The artwork, all around (inks, colors, pencils, letters) is everything that a comic book should be.

Superman looks good, the Batbunny suit looks... well like a Batbunny suit should look. The Bat ears and the rocket launchers on Gordon's shoulders are hilarious. But the drawings are good and in proper proportion with the rest of the artwork.

I'd also like to thank the artists for the nice Superman butt shots. Always a plus in a Superman comic.

Cover Art - 4: We see Supes on the Batbike. He looks great, but nothing is really happening. The lines and colors are well done. But there isn't much going on on the page.