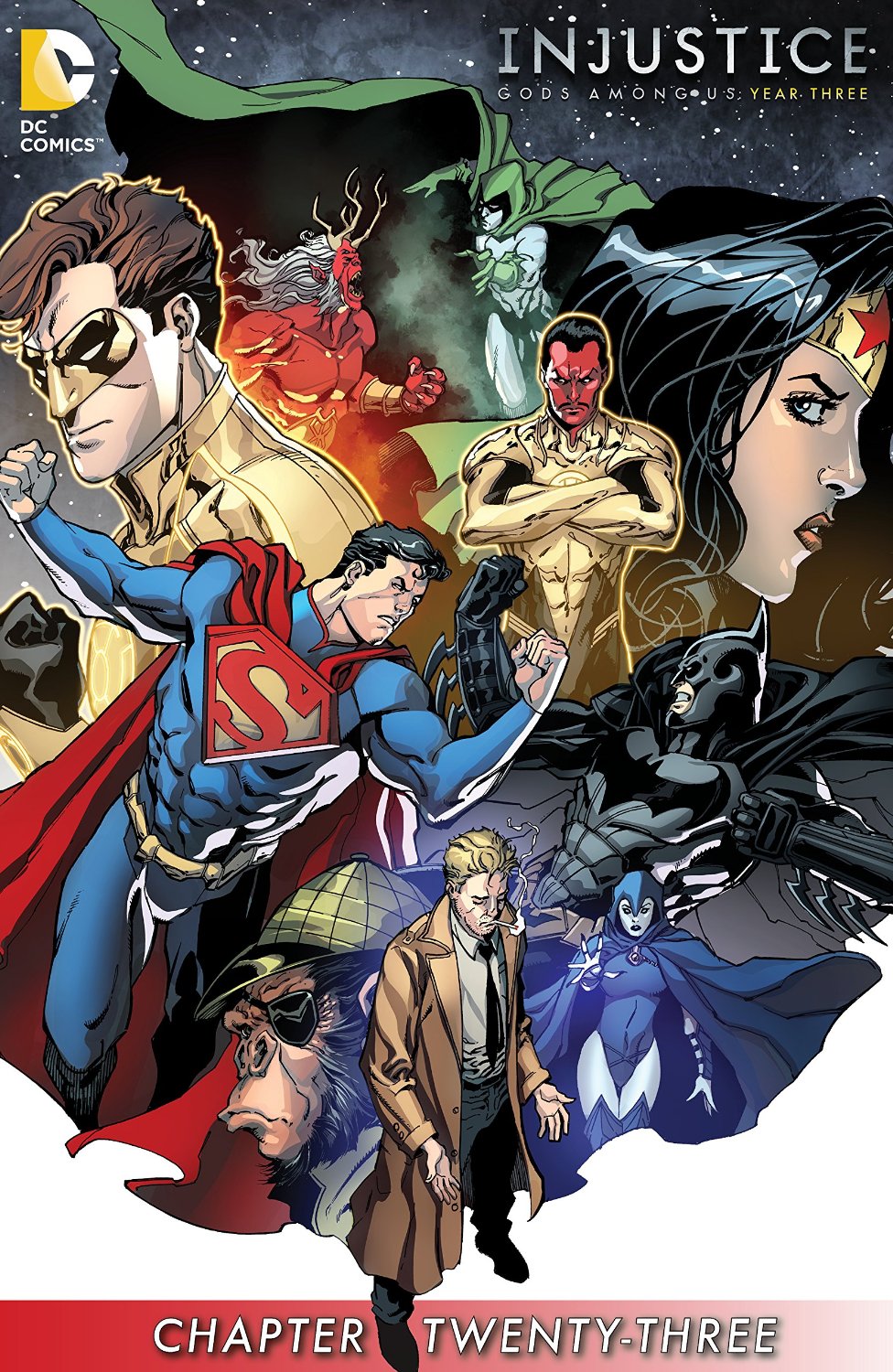 Click to enlarge
Split between the House of Secrets and the House of Mystery, both the League and the Insurgency seek a chance to regroup and address the problem that is Trigon battling Mxyzptlk. Cyborg postulates that since Trigon is involved, the best remedy would be to wake Raven. However, no Leaguer is equipped to do such, as a force is what renders Raven unconscious, and they have no means to belay it. The Insurgency believes that it may be possible to transport Trigon and Mxyzptlk to the Void, a dimension from which they would not be able to return, but would need the assistance of Captain Marvel to do so. Deadman goes to the League and convinces Billy Batson to trust him with the plan concocted. However, due to the massive amount of magical energy being used, whatever held Raven asleep weakens, and she awakens.

Story - 2: The plod to the finish line continues with yet another lacking installment. This is beyond disappointing, and borderline masochistic, as the affliction caused in turning out poor issue after issue is one that cuts both ways. There is very little reason to continue on with Injustice, aside of an OCD to follow an uninteresting story, and Buccellato has placed the entire worth of Year Three on the conclusion, after squandering issue after issue with inconsistent claptrap, rather than furthering the already finite premise of Superman gone despot. Year Three was to be the challenge of magic against Regime Superman's rule, and it has been anything but. Instead we've been treated to the John Constantine show, and a poor one at that, as Constantine has bitten off much more than he could ever hope to nibble, but somehow, he still has to be the smartest lad in the room... with the Batman around. Batman has become a side-player, and the rest of the Insurgency has been reduced to stock characters. They live only to die, and further infuriate those who remain... until they die. Why the League doesn't just send them all to the Void is beyond reason, but part of the reason is that magic requires imagination, and that is a skill that has atrophied on the part of writers, and in the minds of readers. The ability to manipulate nature, magic, is a powerful thing to use in storytelling, however, powerful concepts, like Superman, are rarely used well these days in comics.

If you haven't had a chance to tune in on Dr. Awkward's latest podcast, I highly recommend it. Here's a link. He addresses the question of Superman and magic, and does a good job of it. The misconception, even among professional writers, is that magic weakens Superman a la Kryptonite. Wrong. Wrong! Magic affects him like anyone else, and there's the difference. A sword enchanted to cut anything, will cut anything, including Superman. A sword conjured from magic is just a sword. Dr. Awkward's witty fine print that magic, as written by some, seems to be with the fine print: Will affect Kryptonians, especially Superman. This is on perfect display as we watch Regime Superman grow weaker for no good reason. Superman has travelled through dimensions before. He's gone to Limbo under Grant Morrison's hand. He went to the end of time itself, and none of these things affected him aversely. However, we're supposed to believe that the occurrences of Injustice are plausible simply because magic is involved. Regime is on his knees, and curiously drawn as Superman-Proper (spitcurl, kind face, fabric as opposed to textured outfit), simply because magic is involved. Mind you, according to last issue, other characters were being pulled out of existence. They're still on their feet. Superman/Shazam: The Return of Black Adam is probably the best rendering of Superman versus a magical foe, without being blatantly moronic and asking viewers to be so as well. Black Adam has an edge against Superman in magic, while Superman has an edge against Adam in abilities. Magic isn't a trump card, and it's used effectively in the animation. It should be a 101 class for writers dealing with Superman and magic. Zack Snyder would also do well to view it, as he's under the misconception that Aquaman's trident can cut Superman, and it can't. It's enchanted to do a bunch of stuff, but it's not a +12 Trident of Sharpness or anything like that. Oh well, one more issue to go.

Art - 3: An improvement on last issue all around.