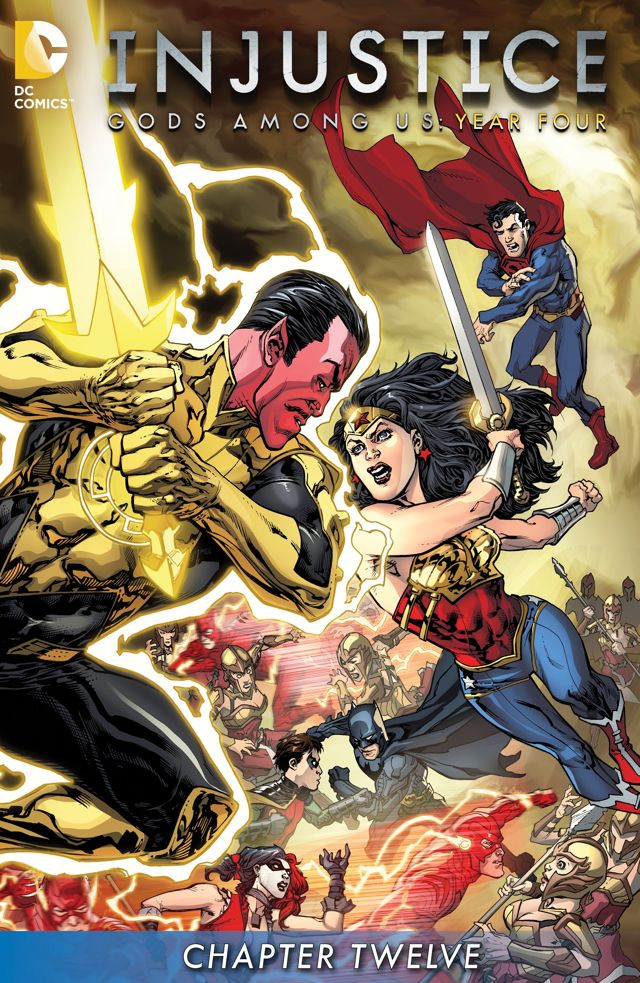 Click to enlarge
The Justice League has been given a 24 hour reprieve by the Olympian pantheon, after which Regime Superman must leave Earth. Wisely, Regime Superman takes the reprieve to regroup, but Hermes dictates that Wonder Woman must join the Olympians, by the will of Zeus. Wonder Woman lashes out at the messenger, and the fighting ensues once more. Cyborg aids Regime to heal more quickly, while the rest of the League battles against the likes of Hercules and Atlas. Hercules gets light against Yellow Lantern, enough that Regime and Wonder Woman need to intervene. However, Hercules proves more than a match for both, knocking Superman into orbit, and throttling Wonder Woman. However, the forgotten Billy Batson is freed by Ares to come to Regime's aid, and speak the magic word.

Story - 2: T. A. EWART: Hello, and welcome to the Injustice mid-year round-up, where myself and invited guests have a look at the year up to this point and comment on it. Please welcome special guest, Regime Superman!

T. A. EWART: OooKaay. Well, let's get into while I have life left, I mean time left. First off, my condolences on your loss. It seems to have had a significant effect on you these past four years.

REGIME SUPERMAN: I want to make sure it never happens to anyone ever again.

T. A. EWART: Do you blame yourself?

T. A. EWART: You weren't able to find Lois and Jimmy in time, and then fell prey to fear gas that was instrumental in what happened later. It must be a terrible burden to bear, even for someone like yourself.

REGIME SUPERMAN: I... it was the Joker's fault, not mine.

T. A. EWART: Is that why you killed him? I mean, I understand if that's the reason you murdered him.

REGIME SUPERMAN: I am not a murderer. The Joker took the lives of countless people before Lois and Jimmy. I made sure that he never would again.

T. A. EWART: Sound, I understand, only, you never did that before with any villain. Was it just because the victims were close to you? Did you feel obligated to mete out justice because on some level you feel you failed them?

REGIME SUPERMAN: You, are a very brave individual.

REGIME SUPERMAN: What do you mean?

T. A. EWART: You're getting beat up by Wonder Woman, letting Batman walk away, you seem unfocused and indecisive.

REGIME SUPERMAN: I have never been more focussed.

T. A. EWART: Right. That's why you let Batman walk away? I mean, you've been after this guy forever. What's changed? You broke his back last time, and now you just let him up and off?

REGIME SUPERMAN: I let Bruce Wayne go with a warning.

T. A. EWART: Malarkey. You should have ended him right then and there.

REGIME SUPERMAN: You are toting very close to the line.

T. A. EWART: And that fight with Wonder Woman. Really? You could have taken her out with a surgical blast of heat vision to the eyes. Instead, you get your arm busted?

T. A. EWART: She can't sit in the centre of the sun indefinitely, you can. You're faster, stronger, more durable, and yet you take an "L"? Either you were holding back, or you're an idiot.

T. A. EWART: Just as I thought. Let's see who you really are.

(T. A. grabs Regime by the hair, which turns out to be a mask, and a new face is revealed)

T. A. EWART: Just as I thought. Why don't you introduce yourself?

IDIOT PLOT: Plotus Idiotus, or Idiot Plot for the laymen.

T. A. EWART: How long have you been impersonating Regime?

IDIOT PLOT: Since the beginning of Year Three. It's why Tom Taylor left.

IDIOT PLOT: Taylor realized that Injustice had no more story, and when I was introduced to help out, he bolted for Marvel Comics.

T. A. EWART: Why are you even doing this?

IDIOT PLOT: Are you serious?! For the same reason everyone else is - the money! Regime isn't due back anytime soon. He's vacationing on Alpha Centauri with Lois Lane. That's how much money he's getting.

IDIOT PLOT: Oops, just forget I said that. Look, my job is to keep this story going long past its prime. I think I'm doing a pretty good effort.

T. A. EWART: You're doing an excellent job of that.

IDIOT PLOT: Cheers. So just enjoy the ride. Sometimes it's about the ride, and not the destination.

T. A. EWART: Does that malarkey actually work?

IDIOT PLOT: Sure on the weak-minded. You've probably seen my work on other stuff too.

IDIOT PLOT: Guilty as charged. Hey, thanks for the invite, and sorry about the deception, but I have to go. Injustice just wouldn't be the same without me. Actually, it wouldn't be anything without me.

T. A. EWART: On that we agree. Well, that's it for now. We'll be back with more criticism next time. We hope you will be too. Until then.

Art - 4: A return to form for Miller. His Hercules panels are very entertaining.

Cover Art - 2: Aside from the primary school line work, it's a poor reflection of what transpires within, and therefore, grossly misleading.