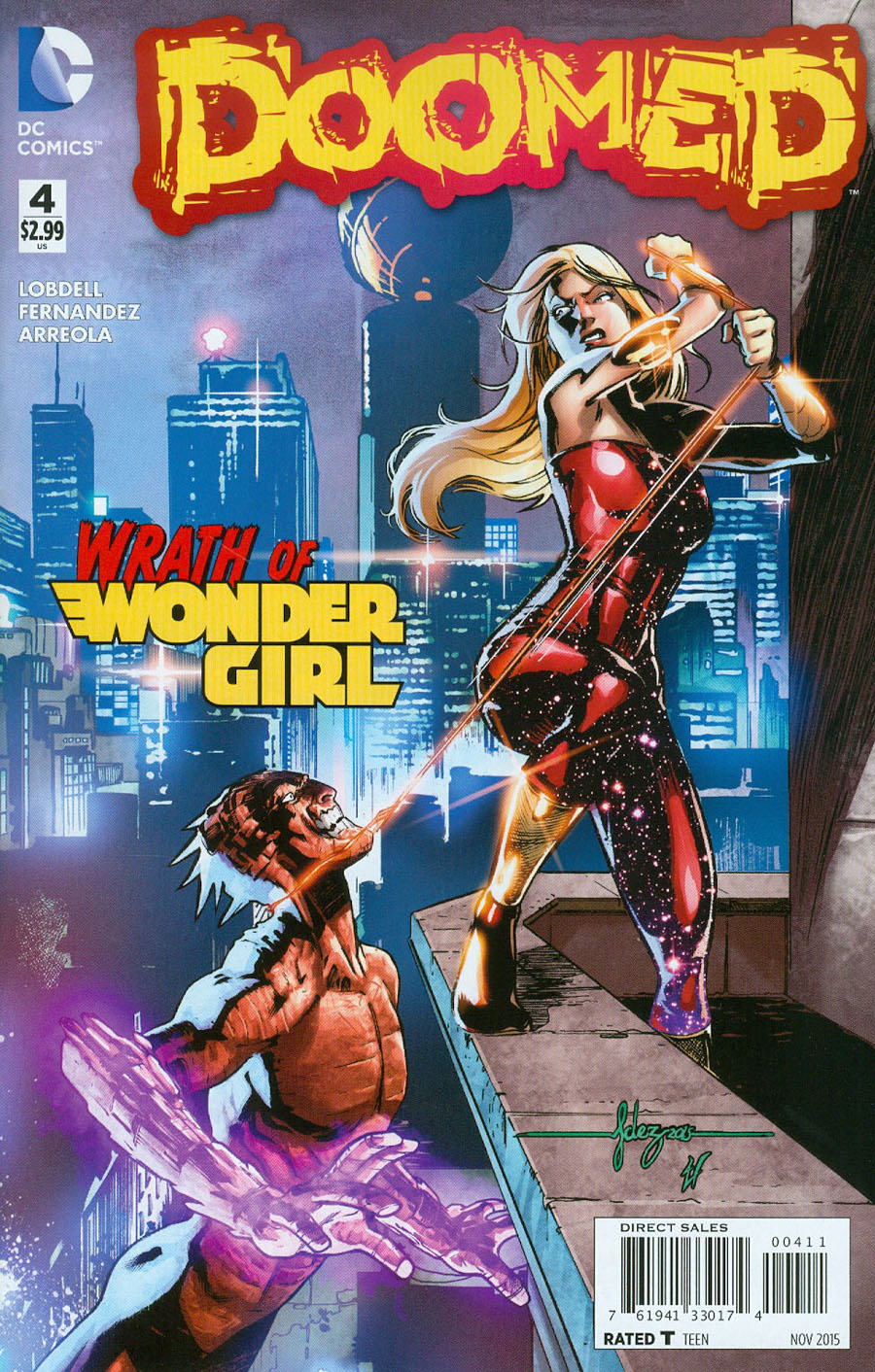 Click to enlarge
Reiser, in his Doomed form, is holding back while a determined Cassie Sandsmark aka Wonder Girl is giving him a beating.

We flashback to when Doomed met Miles a half hour earlier, Reiser finds he can't change back to human form. With Oui Oui the dog in tow, Doomed approaches his Aunt Belle's home and wrestles with whether to reveal his transformation. Belle answers the door and Oui Oui leaps into his owner's arms knocking off her prescription spectacles. Reiser does an about turn and escapes into the darkness, leaping into an abandoned amusement park.

Emotions racing, he imagines scenarios occurring if he is stuck in his hulking form. From dating to dissection, as the scenarios worsen his emotions cause an explosion that transforms him back to human form. Dazed and confused he is unsure if Clarice is genuinely there comforting him. She is, having approached quietly but departing before he regains composure. He is confused at her sudden, yet calming appearance, her arousing his raging hormones was what caused his transformation to begin with.

In S.T.A.R. Labs, Metropolis, a bored Wonder Girl is destroying their equipment for fun. Reiser's boss, Dr. Crabman orders her to desist and to clarify why when S.T.A.R Labs, New York, ordered Power Girl, Kid Flash and Cassie to aid him, she had sent the others away. Cassie brushes off his questioning and looks at the electronic dossier cobbled together since Doomed appeared. Crabman offers to aid Cassie in tracking Doomed, but Wonder Girl informs him her armor has detected exactly where he is and she will hunt him down. Reiser's intern colleague, Jayne realizes the Teen Titan crashing around the lab must be connected to the accident involving Reiser.

Reiser breaks into an old gift shop and puts on an oversized tee, finally calm he is shocked into transforming again by Cassie arriving in destructive fashion. Misjudging Doomed's grunts, growls and roars as aggressive, Cassie is unrelenting in her attack. Reiser uses her blind rage to unleash an energy burst from his hands which knocks her into a nearby ferris wheel. Cassie is shocked when, instead of attacking, Doomed races forward and catches the wheel, and in turn, when safely at a distance, Cassie uses her lasso to yank Reiser away too. Somehow Doomed is a naked Reiser again and the breather gives them time to talk.

Reiser explains his origins and theorizes that Cassie's lasso was all that was keeping him from hulking out again. Testing the theory, Cassie releases him but he doesn't hulk out and he considers turning himself into Dr. Crabman for testing. Cassie ponders for a moment and tells him that he will find a balance. She thinks back to her stealing the Silent Armor and bonding with it forever without thinking of the consequences. She reveals that, like Doomed, she has to struggle every minute of every day to control its monstrous potential and focus it into good. Reiser can and must do the same with his Doomed persona.

Cassie hands him her Teen Titan email and tells him that she will pretend she couldn't find him. Like Miles, she too tells him if he stays a good guy she'll leave him be - or return to kill him. She tells Reiser that if he ever needs her help and support to email and she will be there. Reiser watches her leave and realizes Cassie has finally given him purpose.

Meanwhile back at S.T.A.R. Jayne is digging into the research files of the lab they were cleaning the night of the accident. She is horrified to discover that Reiser has been infected with a mutated version of the Doomsday spore virus. At that moment, Superman in his tee and jeans appears from the shadows and asks Jayne to explain herself.

Story - 3: This was the best structured story this series.

The parallels between Reiser and Cassie play well to the narrative despite the resolution being the same as the confrontation with Miles.

The news is in that Doomed will be ending by issue #6 and despite the series being terrible thus far, it is finally finding its feet.

It isn't the most original of books, and a far cry from being well written but now Reiser is no longer bouncing around from confrontation to confrontation it may be a turning point.

Perhaps Doomed will be a Titan, revitalizing that limping book too?

I am unclear as to the timeline for this book. Doomed has really only been active for what appears to be four days, in issue #1 Clark Kent appears as a suited Daily Planet reporter, but here he reappears with his 'roided thug look.

This book being Doomsday spore centric, it makes sense for Superman to appear but with the rinse and repeat format, I am guessing Clark will follow Cassie and Miles with their 'I've realized you're a good guy underneath, so will leave you to it' mantra.

If Doomed continues in some fashion, work really needs to be done to make the title evolve beyond a hulk/spider-man rip off.

Art - 3: Javier Fernandez has finally found his groove with Doomed.

When the artwork is focused it really does look great. With Aunt Belle reduced to a cameo the cartoon element of the book was at a minimum and the art really began to thrive.

The confused styling in past issues really worked against the book and here you can see it elevating the book to a different level.

Cover Art - 2: I don't like the Teen Titans and for Cassie to take centre stage is a bit of a put off.

When the star, is sagging off the side of a building it doesn't say to the reader - Reiser/Doomed is a capable, interesting kick ass superhero.

Despite the art looking good, in concept it defeats itself.