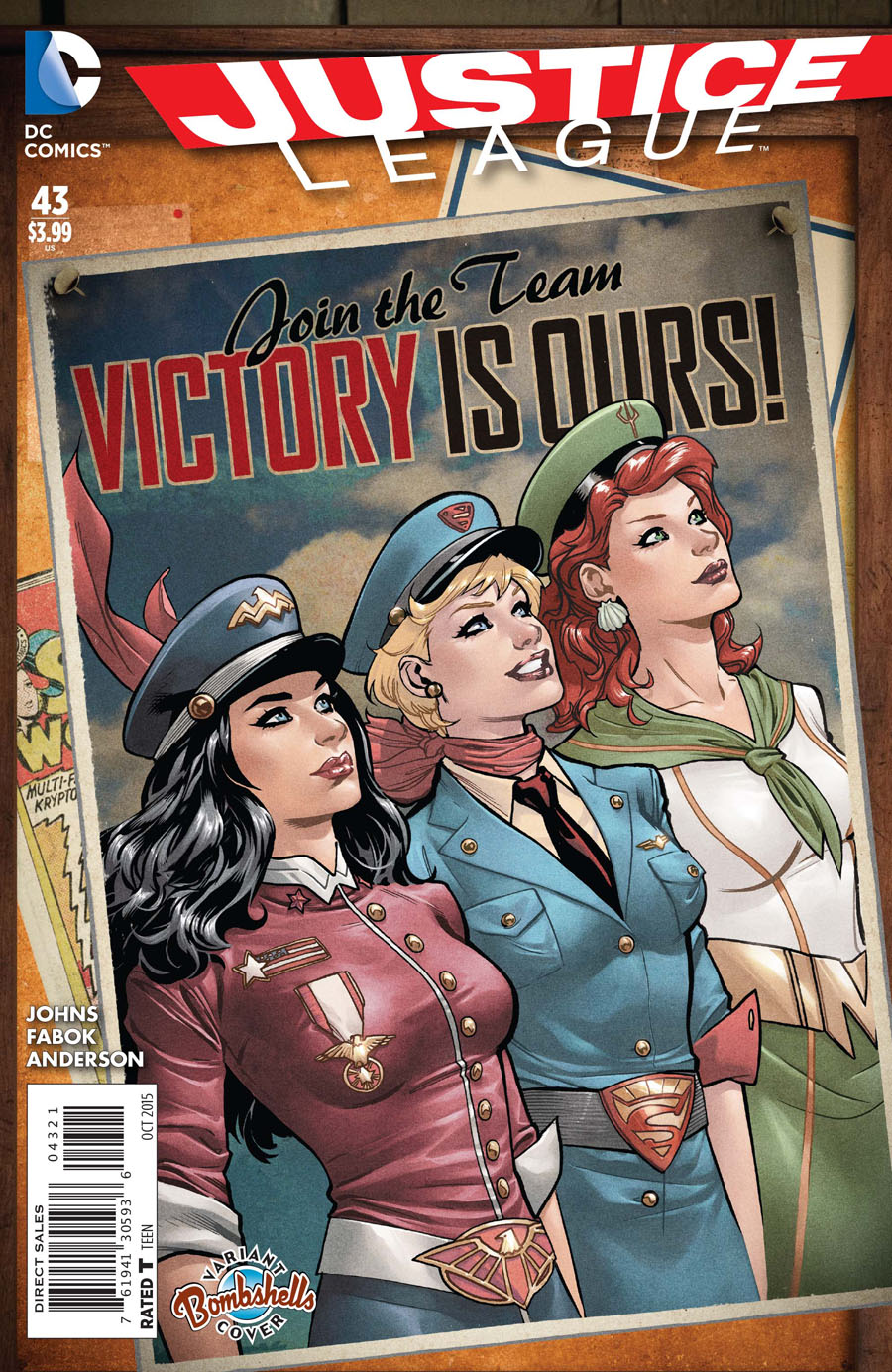 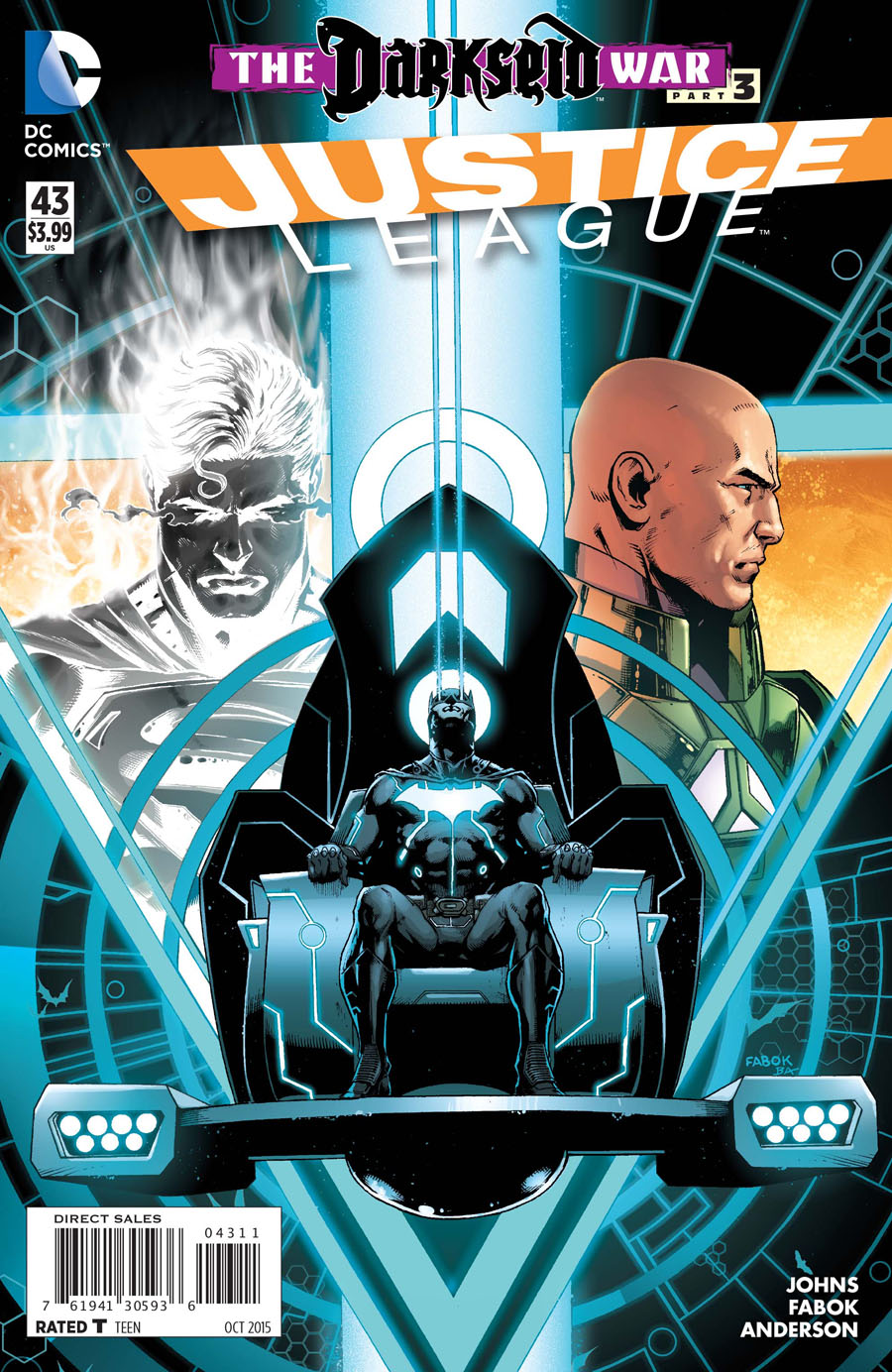 Click to enlarge
Kalibak and Steppenwolf are sent to Earth by Darkseid to secure Grail and her mother, Myrina Black. Kalibak intimates that he will as his father orders, but his way, not Darkseid's. The Rock of Eternity hosts the Justice League and the newly minted New God, the Batman. Green Lantern expresses concern for what the effects of being connected to the Mobius Chair may bring, but Batman says he can deal with it. On Apokolips, Superman and Lex Luthor are attacked by lowlies. Superman repulses them, but learns that there is no sunlight, and his powers are depleting fast. Mister Miracle finds the League and they separate to deal with the Anti-Monitor. Bat-God and Green Lantern leave for the Multiverse, while the rest of the League continue on with Mister Miracle to confront the Anti-Monitor. However, after the League arrives, Darkseid appears with a horde of paradaemons. On Apokolips, Superman and Luthor flee from paradaemons, until Luthor decides to drop Superman into the fire-pits, hoping that they will recharge Superman with solar energy they contain. Superman is recharged into a dark version of himself, decreeing that he should have killed Luthor long ago.

Story - 3: The rating should have been higher, and would have, if not for the unforced errors, and Superman. This story will make the fifth time that Superman has been corrupted by Apokolips and it's just wearing more than a little thin. The rest of the story is a slow boil, with Mister Miracle finally finding the Justice League, and the melee between the two heavies commencing. Wonder Woman's brief recitation of Odysseus' choice between Charybdis and Scylla, a proverbial rock and a hard place, is faulty. Odysseus wasn't choosing between two evils, but neutral predators and the difficult selection they presented. He chose Scylla because it would save the most lives, not the cynical moral of story Wonder Woman gives because of her distrust of the gods. Aside of Bat-God, Redundant Man, and Cynical Woman, the rest of the League serves no purpose. Shazam literally has one line and fades into the background. Flash, Cyborg, and Power Ring fare slightly better, while Green Lantern does B-Levels, as he's allowed to talk to Bat-God. Ensemble pieces are tough, and Johns usually excels at them, but this is phoned in filler and padding.

Why is Superman on the Justice League? He serves no purpose, receives little light, isn't a leader or respective figure... why is he here? Shazam is on the team, so there's more than enough flying strongmen, and Johns has yet to display any desire to do other than have Superman captured, sidelined, or corrupted. Superman's depiction in this issue was pathetic. The look of fear on Luthor's face when Superman is injured, is surpassed by the pallid panic in Superman's eyes when he learns that he'll soon be powerless. So much for the Man and not the Super. The fixation with Superman, being depowered, corrupted, lessened, deconstructed, etc., borders on the erotic in terms of fascination from DC these days. If readers are romanticizing a Golden Age Superman that never existed, DC wants that romanticizing as modern canon. In order for this story to work, for me, I'd have to forget that Superman was shown to be able to exert himself for days without solar radiation, only to drop a single bead of sweat. 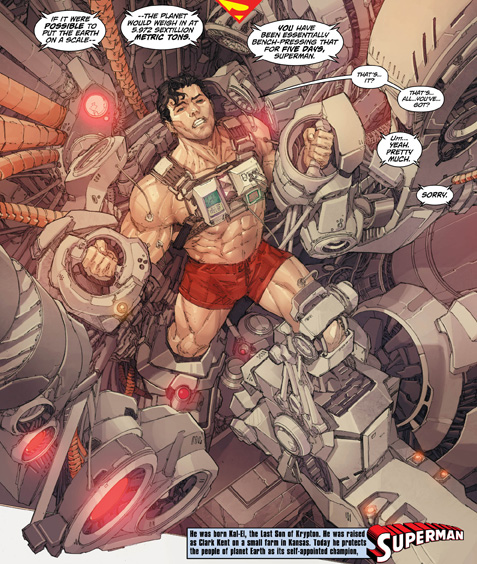 Luthor's deduction about the fire-pits rivals Wonder Woman's faulty approach, for if the fire-pits are a source of solar radiation, Superman wouldn't be losing his powers. If Superman can absorb energy from the sun on Earth, and be as powerful as he is from that distance, he should be just fine with a power source that close to him. Story is going to trump continuity, but in its own story? That's never good. Johns seems to have predilection with depowering Superman as well. This is the third storyline where he does so, and the second where Superman is corrupted. The motif is the same, as is the rationale, as Johns is working through something with Superman and just quite can't get it done. The best of this examination was Superman and the Legion of Superheroes(SATLOS). It was so good that Johns borrows from it in the following panel:

In both panels, Superman has the realization that something is wrong, only look at the eyes. On the left, from SATLOS, the look is one of sheer shock. Superman has been wounded and has no idea why. The other shows a glassy eyed Superman, as if his eyes are welling. There's a reason why one works and the other doesn't, but it's a consistency that Johns displays with Superman, or at least, his Superman. Red solar energy drains Superman almost immediately, Superman is at his best when depowered, and nothing beats a look of trepidation in the eyes of the Man of Tomorrow.

Art - 4: The sequence to pages 11-12, that ends with Superman's furrowed brow and glassy stare is top. Fabok teases the reader about Superman's face, first with a strike, then Superman holding it, the Lex's reaction to the blood that is shown on the next page. Match that with Batman's bloated TDKR look, as he's pumped with data from the Mobius Chair, and Fabok turns in an issue that allows his extra talents to show. The opportunities to do so aren't often, but he's made the most of them here.

Cover Art - 4: If you look at the cover quickly, it says Darkseid Justice League. Superman is corrupted, Batman is a god, and Lex Luthor is poised to assume the throne. Coincidence?