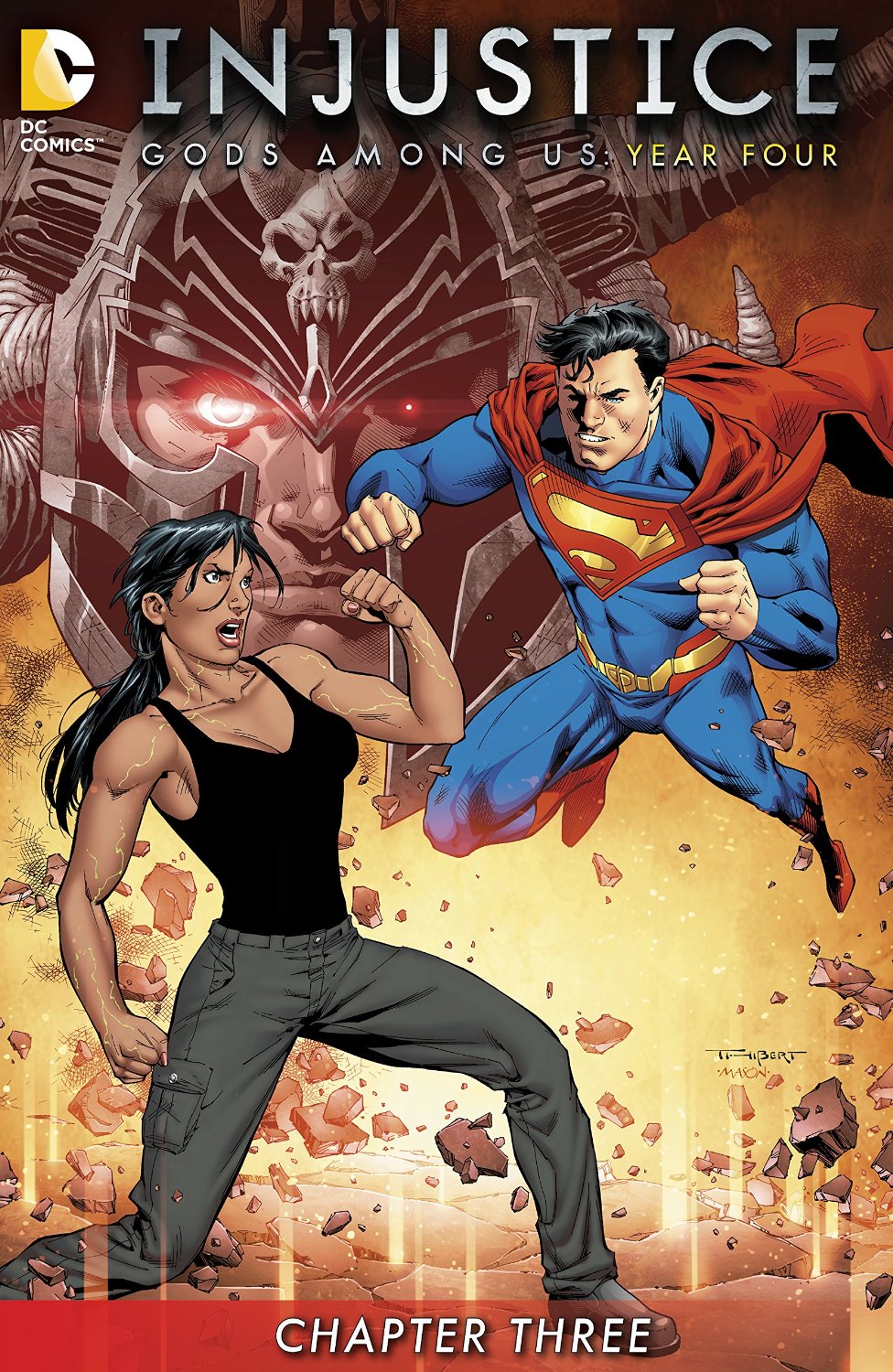 Click to enlarge
Regime Superman is having a long overdue visit with his parents, who despite saying to the contrary, are visibly uncomfortable in his presence. Their conversation is cut short when Regime hears the threat of Rene Montoya, and speeds off to engage her. Montoya has sunk into a deep despair, consuming alcohol and believing there is only one thing left to do, in terms of defeating Regime. She consumes a fist-full of super-pills, sneaks aboard Catwoman's jet, and matters unfold as they did the last two issues. Regime and Montoya engage in melee, with the outcome to be decided next issue. Harley Quinn poses as Billy Batson's mother and abducts him when he refuses to change to Shazam.

Story - 4: In terms of the Regime Superman/Montoya donnybrook, that was actually entertaining, though it might be the aftereffect of having seen Mad Max: Fury Road after breaking night. Montoya's despondency comes across very well, and does go some distances towards justifying her actions and excusing the nonsensical decision that she makes. It's questionable that she would be able to relapse on alcohol, as taking the super-pill should make her immune to the effects. Here is where a good writer can go deeper, explaining that the pill intensified her dependency, just as it exacerbated Jim Gordon's cancer, or, perhaps, Montoya isn't a relapse case at all, it's just her depression that allows her to believe such is the case. Her decision seems rash even with the caveats applied, as it comes suddenly and from nowhere. The Insurgency is at it's lowest ebb since Injustice has been offered, but it's far from a nadir. However, as we've been given a great amount of time and space since the Insurgency's last defeat, it's on the reader to fill in the chasms that are left in storytelling, which Injustice readers seem to be ready and raring to do. Still, Montoya's desperation comes across as genuine, and her fall will definitely be worthy of emoting for some readers, and in that it's a step up from the last two installments.

The super-pill remains a problem in usage. It has an unlimited range of effect in terms of strength, even though that shouldn't be the case. It's been enough for Harley Quinn to defeat Lobo, yet it accelerated Jim Gordon's cancer. It simply exists to allow an out for any and every situation that would propose a difficulty i.e. the majority of the Injustice storyline. It could be used better, but it's doubtful that it will be. We've seen Wonder Woman snap Huntress' neck, yet Batman can go hand-to-hand with Superman, and have no damage whatsoever. The inconsistency reminds one that the story is being padded out and that moments are being manufactured.

Harley Quinn's pursuit of Billy Batson is questionable for more than the obvious puerile nature of it. The fact that Harley could even get into the school under the guise of Billy's mom is ludicrous, as Billy is an orphan. The process to see a child in a school is nowhere near as simplistic as showing up, calling for the child, and waiting. I could understand if Harley at least dressed the part, shunning her salacious outfit for one more conservative, in order to effect the image of a responsible adult, would go someways towards believing that Harley could get this close to Billy without kicking up dust. However, much as Batman can do anything he wants... because he's Batman, Harley benefits from the same popularity, at least in the mind of the writer. The uncomfortable nature of what's occurring has seriously made me question why it needs to occur. I believe that most readers don't believe that Billy is in real danger. He can simply say the word and become the Earth's Mightiest Mortal. However, as shown this issue, Billy is very much a child who has been abducted, and such a serious matter needs better care than what's given here. Many boys are abducted in such a manner every year, because they're vulnerable and unable to defend themselves. The abductors are very much like Harley Quinn, sick-minded individuals who have convinced themselves that there is some love between them, or worse, the offenders have a twisted disdain for any such youth. I don't expect a readership predicated on seeing what happens next to be concerned. This is the age of using rape as a means towards character development, as seen on one too many tele-shows. I would expect the writer of this series to have more thought on a matter than he renders in the worst sensationalistic manner possible.

Art - 3: A rushed job in too many areas, especially with the Kents.

Cover Art - 4: Regime Superman fights woman in A-Shirt. That pretty much says it all.