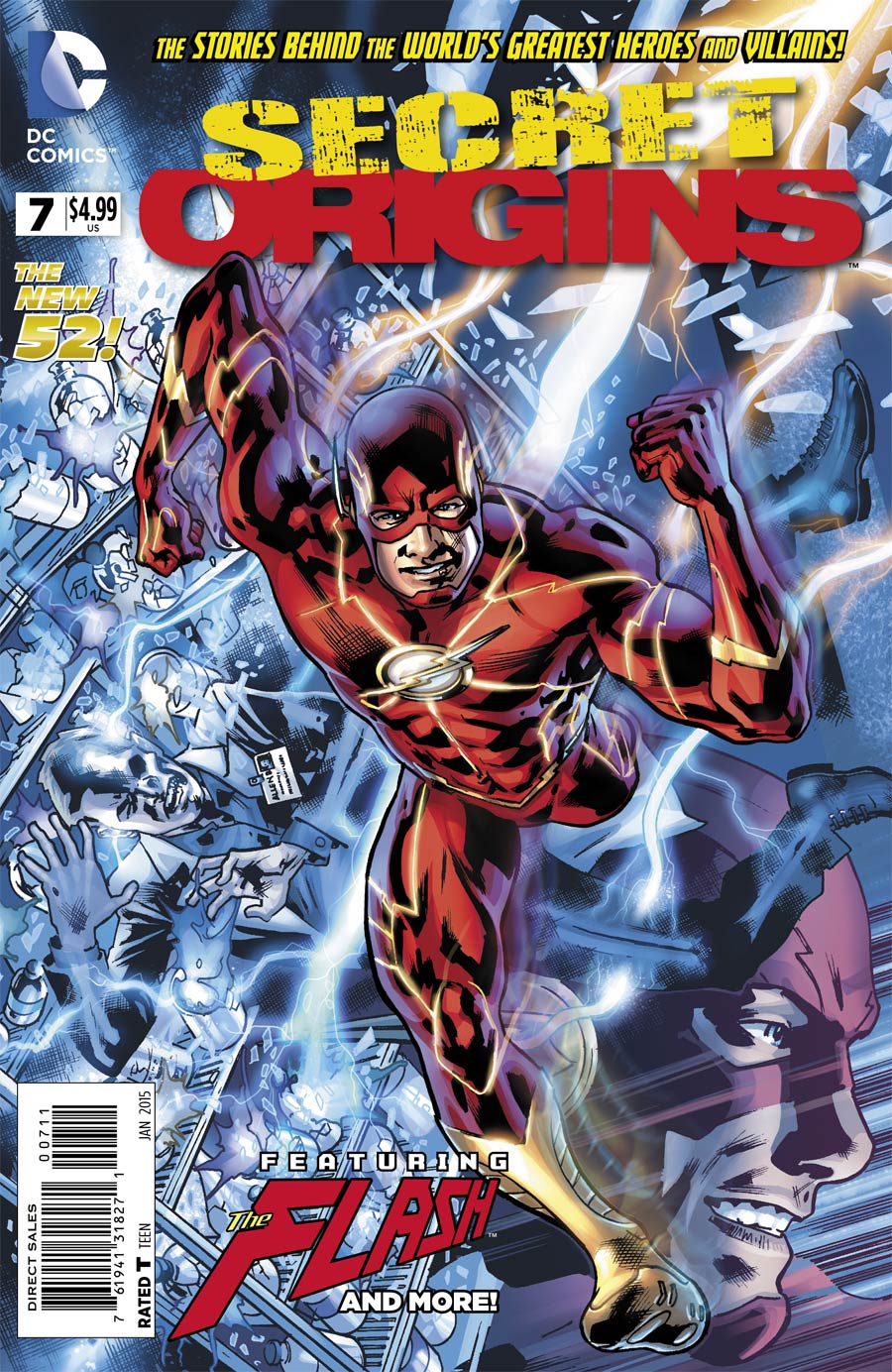 Click to enlarge
[Note: This review only deals with the Superboy origin story told in this comic book.]

Kon-El is living the secret life of a civilian in New York City, re-evaluating his place in the world but he is also part or S.T.A.R Labs now.

A fully functioning lab is hidden in the city centre and Kon meets the new team there for the first time.

A flashback of Superboy's beginnings in N.O.W.H.E.R.E occur while he donates blood and then thinks through his being manipulated by Harvest and the labs before he met the Teen Titans and he explains that while there he learnt to be a hero and fell in love with Wonder Girl.

The doctor makes an assumption that Kon is fully Kryptonian and tries to use a needle coated in Kryptonite, Kon explains his powers mimic (via TTK) Superman's own but he is also a clone of a possible son Superman might have had one day with Lois Lane.

Kon was completely in awe, lost and confused when he met his 'Father' Superman, he explains the Jon Kent swap vaguely to the Doctor as 'acting out as a rebellious teen' and glosses over it somewhat lying that there were other clones of him that had arrived while he was a herald of the cosmic being, Oracle, mentioning nothing of the Legion of Supervillains. Kon explains how Jon wanted to alter the timeline and was stopped.

Kon may have been left behind with the Titans disbanding and then reforming without him. As it turns out the team with Doctor Gray was not a good fit and Kon in his biosuit still fights supervillainy but in New York rather than Metropolis.

The Doctor completes the blood extraction and waits for his computer to analyze the results but is surprised that Kon has made a decision - no matter the scientific results he is and always will be Superboy!

Superboy walks out of the lab with a renewed outlook on life as the doctor looks at his computer to be confronted by a surprise - Kryptonian - 45%, Human - 45% and 10% unknown... what could it mean?

Story - 2: Doctor Gray, Niti and the others created a team for Superboy to flourish under Aaron Kuder and then we revert to a new lab, new scientist who has, it seems, lost all the research on Kon from N.O.W.H.E.R.E (which S.T.A.R retrieved!) and the research the Dr. Gray conducted on Kon and Jon...

This buffoon of a scientist has no clue to literally ANYTHING about Kon, and the teen reveals information - including Superman's son's human NAME to this guy - I thought it might be inner monologue but they talk about some things during the blood tests that contradict that...

There is also the "Return to Krypton" arc that is not referenced and that is just poor as Kon DIED after embracing being a HERO. He was mourned by Kal-El and Kara who swore to fight on in his name and memory... If Superboy is back fighting crime on the streets PUBLICLY - wouldn't Superman or Supergirl attempt to contact him?

I realize this is trying to 'RESET' Superboy, so I can't be too aggressive with my rating as it is aiming Superboy into a new direction which might work. The plus point was the revelation that Kon-El is 10% of something even S.T.A.R cannot identify...

Art - 5: The art was superb, I loved the attention to detail here, I must confess I miss the high energy of the finale arc with Jorge Jimenez but Robson Rocha does a great job of evolving Kon into a more mature direction.