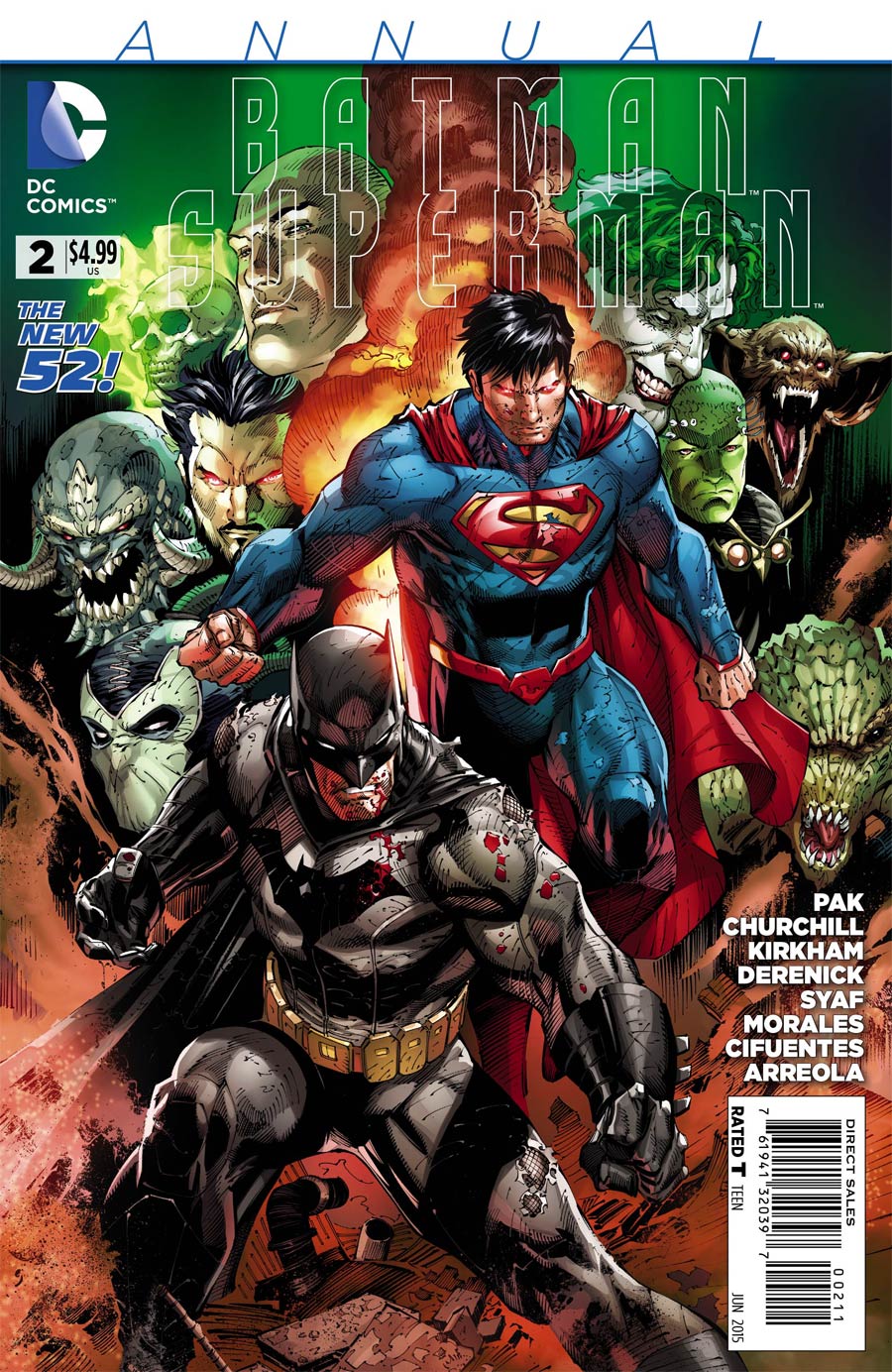 Click to enlarge
From The Phantom Zone, the Phantom King is still able to cause trouble for Superman and Batman. Entering the hearts and minds of some of the most vicious villains on Earth, Xa-Du creates an unreasonable, but useful, hatred for Clark Kent.

Meanwhile, in his Clark Kent persona, Superman is investigating a 'Dooms-Day' cloud-mist-thingy that is lurking around the Bahamas. Clark wants to check on the people who have been 'forgotten' during all the mayhem. Batman balks at Superman using his Kent persona and declares that 'this is a job for Superman.' Clark reluctantly agrees and puts on the Superman garb, but in order to get rid of the mist, Superman has to use his new solar-flare power.

As a result, for the next 24 hours, Superman has no powers and is forced back into his Clark Kent guise. As he stumbles around the jungle, he comes across struggling and wary survivors. As he offers help, the group is attacked by Man-Bats.

These grisly creatures are followed closely by Killer Croc, Bane and Cheshire. And they have only one thing on their minds...

What follows is a series of action scenes where Batman and Clark Kent fend off the rogues. You have the action, you have the funny/snarky one-liners, you have the heroes, despite the odds, beating the villains. And you have The Dark Knight riding a blind Killer Croc like a bull then admitting that Clark Kent is pretty cool even without his powers.

Never thought I'd see either of those things happen.

It would seem that Xa-Du is finally defeated.

However, he has now discovered Superman's greatest weakness. And, tragically he uses it against Clark Kent.

To be continued in June...

Story - 5: The Good: At first, I didn't like Superman's new power. But now I see what the writers are trying to do. The fact that his new power makes Superman human opens up the opportunity for new storylines and character development. A de-powered Superman allows Clark Kent to be the hero. And sometimes we need a reminder that Superman is a hero because of who Clark Kent is. The powers make Superman... well, super, but it's Clark Kent and his values that make Superman a true hero. Even without his powers, Clark Kent wants to help. That is who he is. He cannot stand by and watch injustice happen. And he is willing to put himself at risk to help others.

Thus, the heart of Superman starts with Clark Kent. I love Clark Kent as much as I love Superman, and it was awesome to see Clark play the hero.

I also like the humor. Seeing the panel where Batman has tied up Clark made me laugh out loud. Then, there is the turn-around where they trick the villains. Then, Clark pulls one over on the Cheshire. I know a lot of people would say that Clark would never hit a woman, but Cheshire IS an assassin. She would kill him and anyone else who gets in her way. And the fact that Clark was able to knock her out so easily was pretty darn funny.

I like it when Batman insists that 'this is a job for Superman.' Always love that line.

The Bad: I just want to know where Superman hides those spare eye-glasses. Is there a zip-pocket in his cape?

Do we really have to wait until June to see what happens to Clark?

Art - 5: There are many who make up the creative team for this issue. You would think that, with so many artists, that the issue would be messy and awash of different styles vying for attention. But in this case, artistic team-work is a plus. There is a lot of activity going on in this issue, but it does not distract from the story. And unless you take to using Super-microscopic-vision, you cannot tell where one artist left off and the other began.

Cover Art - 4: It's just too busy. I like all the character's expressions, and each individual piece of character art work is great. But it is just too much. And since this is a Clark Kent centric issue, I would have liked to see mild-mannered Clark Kent on the cover instead of red-eyed Superman.