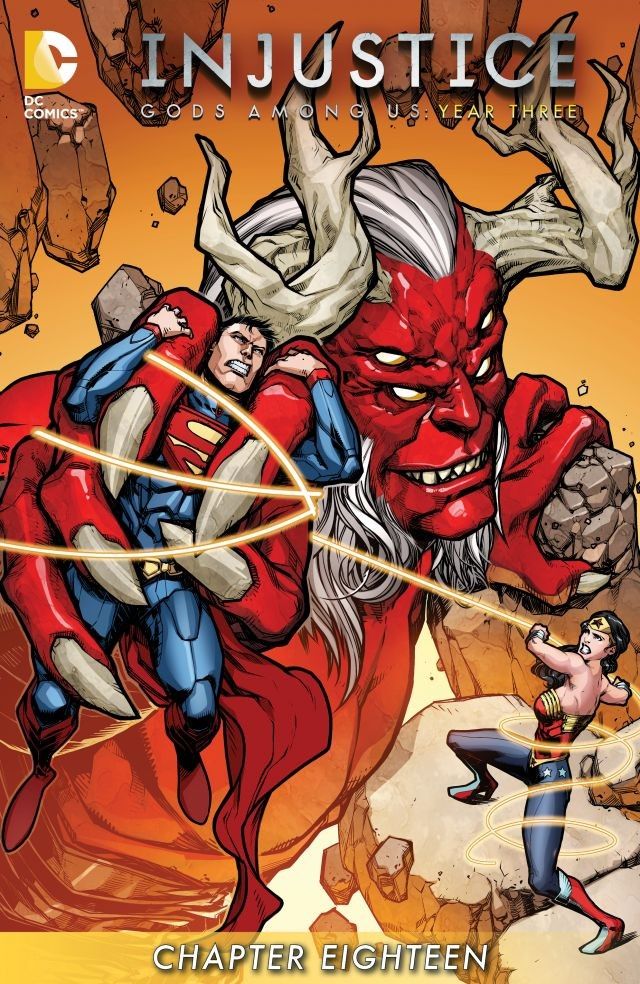 Click to enlarge
Trigon is under the impression that Regime Superman is responsible for Raven's abduction, which is a product of lies spread by Constantine. The Insurgency seeks to retreat before Trigon sorts out the truth leaving the League to contend with Trigon. Regime tries to convince Trigon that he is there to save Raven, but Trigon is too enraged to listen. Trigon defeats the League, and is about to kill Regime and Wonder Woman, when a blast of energy stays his hand. Mr Mxyzptlk is responsible for the blast, and tells Trigon to "Leave my Superman, alone."

Story - 2: This series is just imploring for the lowest possible rating. It seems that the shift in writing duties is the main culprit for the story having been run aground, and Buccellato hasn't found a way to fix the problem. This was Tom Taylor's story and while Taylor wrote a fairly bombastic and sensationalist story, there was the slimmest thread of cohesion within the mix. Trigon's appearance and the League's reaction is just one more thing that doesn't make sense. Mr Mxyzptlk's appearance just compounds things further. These are characters that can literally do anything that they want. Why are they doing this?

This issue lost me when Trigon raised his fists and lowered them on Regime, who didn't even try to move. "He was wiped and tired from his fight with Trigon!" is what some apologist will say, but as Trigon doesn't display super-speed, and raises his arms slowly up and then down, it's hard to swallow that Regime couldn't even so much have rolled out of the way. That and the ridiculous notion that magic is a weakness for Regime, rather than magic being ale to affect him. Trigon's being a magical being has no more effect on Superman than Captain Marvel or Wonder Woman would. He casts no spells, is not composed of a magical being that causes damage by him simply existing, so why does he affect Regime adversely? Lazy writing. Period. It's the same reason why Captain Marvel is having trouble dealing with Harley Quinn, and Ares is being gutted. The same reason why Wonder Woman has a problem with Regime being a Yellow Lantern, but is just fine with Hal Jordan being one. Lazy, just lazy.

Art - 3: A better show this issue, though Regime is depicted as Superman, and needs to regain the despotic quality that makes him such, at least facially.

Cover Art - 4: Really cool! Worthy of the Bronze Age covers that sold so many comics.