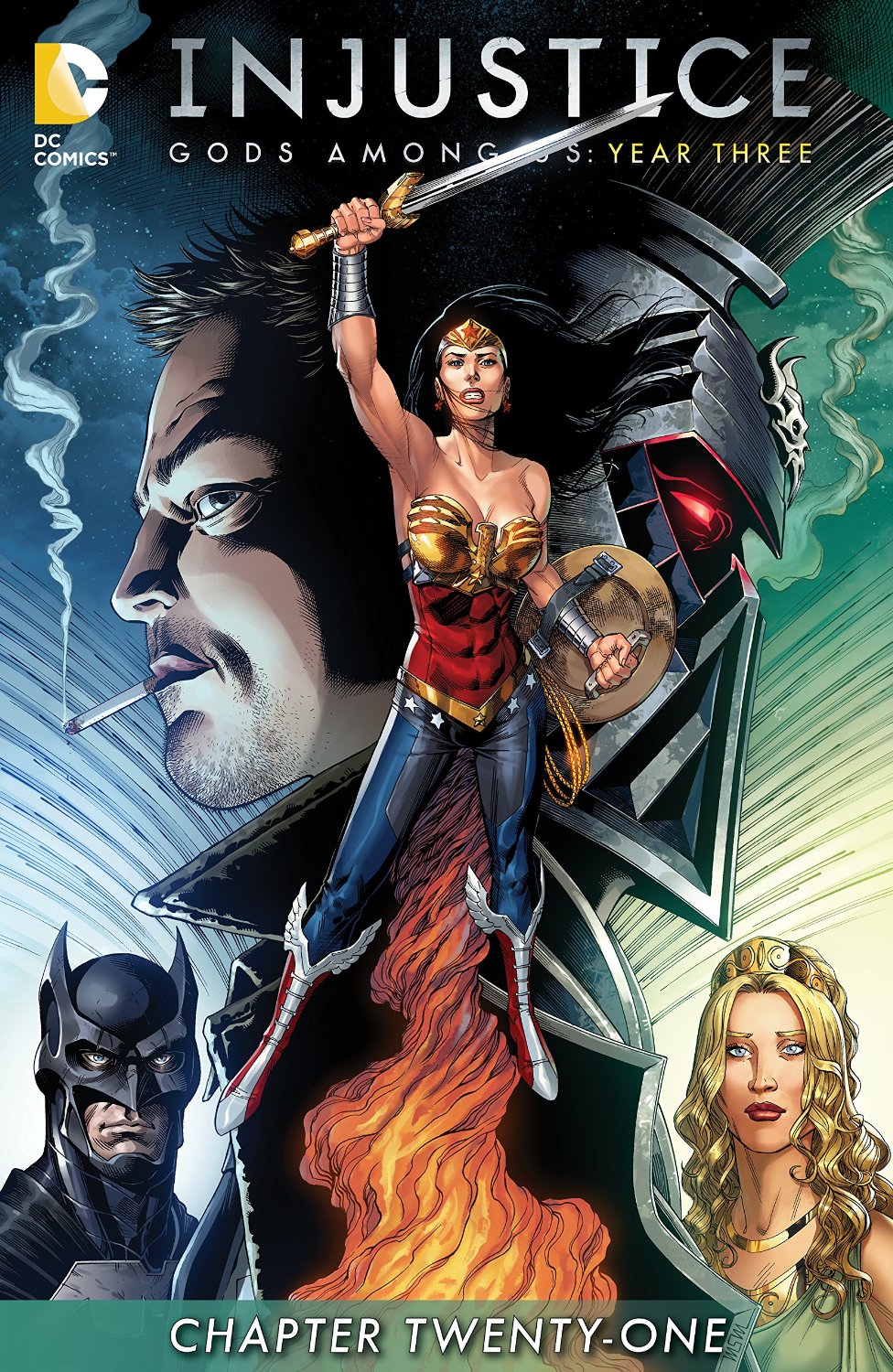 Click to enlarge
Deadman (Nightwing) possesses Poison Ivy, and has her fly the Batplane into the melee between the Insurgency and the Justice League. Deadman then possesses Captain Marvel, using him to beat back Wonder Woman. Deadman causes Marvel to speak the magic word: Shazam!, causing Billy Batson to appear where Marvel once stood. Deadman, as Dick Grayson, speaks to the Batman one last time, thanking him for being his father. Huntress and Batwoman seek to press their advantage on a weakened Regime Superman, but he finds a defender in Wonder Woman. Huntress and Batwoman debate with Wonder Woman as they fight, until Wonder Woman accidentally snaps the neck of Huntress. Meanwhile, the fight between Trigon and Mxyzptlk continues, and Hal Jordan locates the captured members of the League.

Story - 1: There were a lot of things that were structurally wrong with this issue, and most, if not all of it stems from poor editing and a lack of knowledge on these grand characters. Previously Batman was knocked out and Regime Superman was still hearty enough to fight. This installment, Regime looks about to faint, while Batman has regained his footing. Wonder Woman snaps Huntresses neck, but the super-pill had given the Insurgency enough power to contend with even Regime. Deadman is able to summon the magic lightening, let alone know the magic word? It's all disjointed and uncompromisingly indolent. It cannot be that hard to review what happened in the previous issue, as this reviewer did, of even do a basic wiki on these character. Captain Marvel, on his reboot to being called "Shazam" (which this issue demonstrates as a singularly foolish move) was given the ability to summon the lightening only when he chose to, not just because the word is said. However, even if that portion didn't take, Marvel's magic resistance makes him immune to possession. Earlier in Year Three, we saw that there is a duality to the nature of Captain Marvel when his mind was entered i.e. Deadman, even if it were possible, could possess only one aspect of Marvel, not both. The aforesaid notwithstanding, is there anyone who doesn't know the magic word? It has to be the worst kept secret, even moreso now that it couples as Marvel's new name. Poison Ivy contending with Swamp Thing isn't even worthy of consideration. However, Wonder Woman's manslaughter of Huntress (couldn't ask for better nouns to string) begs the question of the super-pill: What exactly does it do? How long does it last? It made Jim Gordon strong, but also accelerated his cancer. The Insurgency can fight with Superman, with no obvious damage, but Wonder Woman's tug snaps a neck? It's Deus ex Machina at its lowest, Injustice is low enough as it is, right now. A competent editor could point out this errors, and a good editor could help repair them, but obviously that's not needed for Injustice, as there no regard that its readership is concerned with such things.

The biggest disappointment of this book, this year, is that it's a constant rehash of Year One. Heroes fighting each other and death. We've seen no development of Regime's dictatorship, no hard living for the underground Insurgency, just ridiculous fighting that should have ended in one battle. The book thrives on dysfunction and inconsistency, and the wager that its readers do not care about such things. Why is Wonder Woman concerned with Huntress' death, when she killed a powerless man by crushing his skull? What kind of warrior makes an "accidental" kill? It more set-up for nothing, driving towards a foregone conclusion. The fight with Trigon and Mxyzptlk is nothing more that annoying, and like many things with Injustice, it's gone on far too long. There is no investment in it, and without that banking, the reveal of Mxyzptlk has been vapid and pointless. Worst of all is Regime Superman, who can survive several nuclear blasts, but can't wreckshop the Insurgency... because they're on the pill. Year Three has been a thin, insipid offering, and it cannot end with more speed.

Art - 2: The line-work matches the pedestrian story, and bears an unfinished, secondary look.