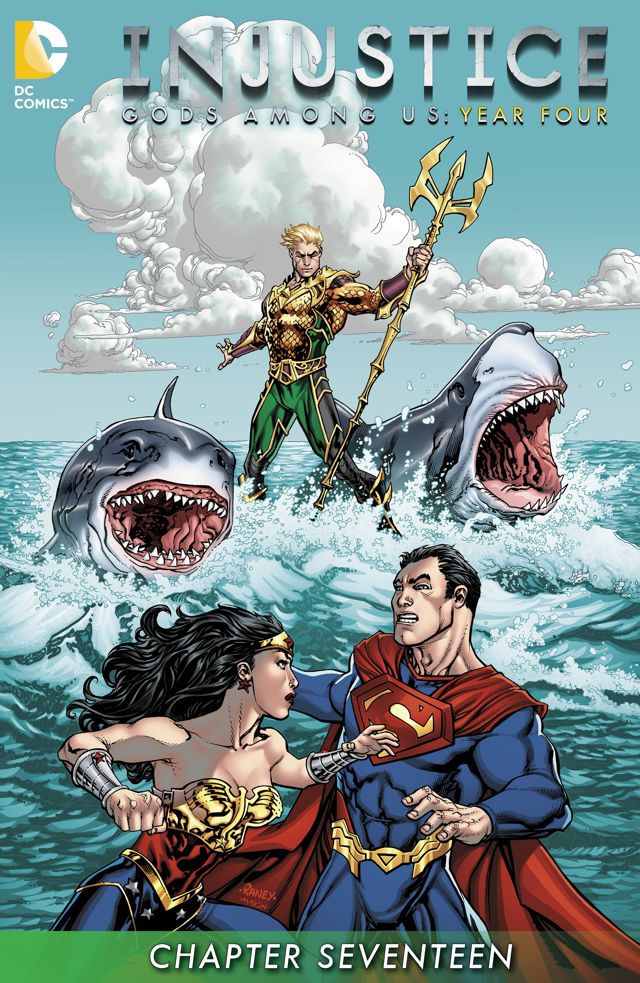 Click to enlarge
Hipollyta, Harley Quinn, and Billy Batson are being ferried to Tartarus. The Insurgency and the Amazons grudgingly share a victory table, which is absent too many principals, when the rumble of an immense tidal wave raises everyone from their squabbling. The wave miraculously holds itself from falling, due to the power of Poseidon, who demands that the gods abandon Themyscira and their war with Regime Superman. On cue, Regime makes his appearance, and the balance of power shifts yet again. Batman seeks the aid of Aquaman, who declines to intervene. Wonder Woman accosts Regime for his new tactic which threatens Amazonian lives. Wonder Woman strikes Regime, and simultaneously an arrow hits Poseidon, and control is lost of the tidal wave. However, Aquaman has a change of heart, and arrives in time to dissipate the tidal wave, and the balance of power once more.

Story - 2: "What happens when the oceans flood that island? How will it affect the sea life you are sworn to protect?" Nothing like good old-fashioned guilt when there's nothing else in the tank. The Batman's ploy shouldn't have worked, as Aquaman should know that a tidal wave won't harm "sea life" in the destruction of the island, unless there is something disastrous on the island, like a nuclear reactor. That Aquaman doesn't know this is curious, as he comes from a city that was once an island, until it was submerged in a cataclysmic event, perhaps by tidal wave? Nonetheless, it gets Aquaman into the game, and he's very much needed, as we're almost done with Year Four, and there are still at least six gold-level characters from the game that haven't made their appearance, yet. Poseidon's rage at Aquaman is comical, as Poseidon hadn't willed the tidal wave to commence. "Who dares interrupt the will against my will?!" would be more apropos. Aside of that, nothing truly occurs that we weren't privy to from last issue. Poseidon taking sides against Zeus is yet another contrivance to deal with, as there is no reason for Zeus to be involved in this quagmire, let alone Poseidon. Percy Jackson and his amazing adventures aside, there isn't the bad blood between the two brothers that some writers like to foist upon them. The exception being when Poseidon tried to dethrone Zeus, but then, every Olympian was in on that one. There's absolutely no reason for him to be involved, but then, there's no reason for any of the gods to be involved, which will be shown in another seven issues.

Still, we read on, and why is that? One reason, and I never thought it would come to this, but Injustice has been serialized long enough that the characters offered by the aforesaid, are nearly the classic versions... in comparison to the New 52 debacle. While the Injustice heroes are totally dysfunctional, they are still closer to what readers would expect of the characters, and that is saying a massive amount about how distant the New 52 heroes are from their core. Characters like Nightwing and Black Canary are unrecognizable in the New 52 universe, and ironically, dead in Injustice, but here, at least, Regime Superman can be shown as Superman used to be. Regime was once an inspirational figure (that again is saying a massive amount), while New 52 Superman has never been near that level of competency. Wonder Woman could convince Regime to relinquish the power of a Yellow Lantern ring (Ha! Bet you wish you had it now, huh?), with words that are distant from her New 52 counterpart, who spends her time waving a sword at anything moving and being the redundant God of War. The other reason? Injustice understands how to present a story in serial form. The object is have the reader anticipating the next issue, to have them wanting to see where the story (Ha!) will go next. Even myself, who thoroughly detests the premise, direction, etc. that is Injustice looks forward to the next installment, if only to see if it can outdo the last idiot plot that was done previously... and that, to look forward to a book that will be given a proper slating, as opposed to any Superman book offered by New 52, once more, says massive amounts of how off course DC is with their stable of heroes.

Art - 3: Standard fare and pretty bland after the last three issues and Derenick. No panel stands out, and too much of the book looks half-formed; a sign that, perhaps, Xermanico shouldn't be left to the art chores solely.

Cover Art - 3: While the colors and conceit are appealing, this is a stupid cover. Regime and Wonder Woman look cut and pasted in, and Aquaman isn't even standing on the sharks he's supposedly riding. Sloppy. Lazy. Amateurish.