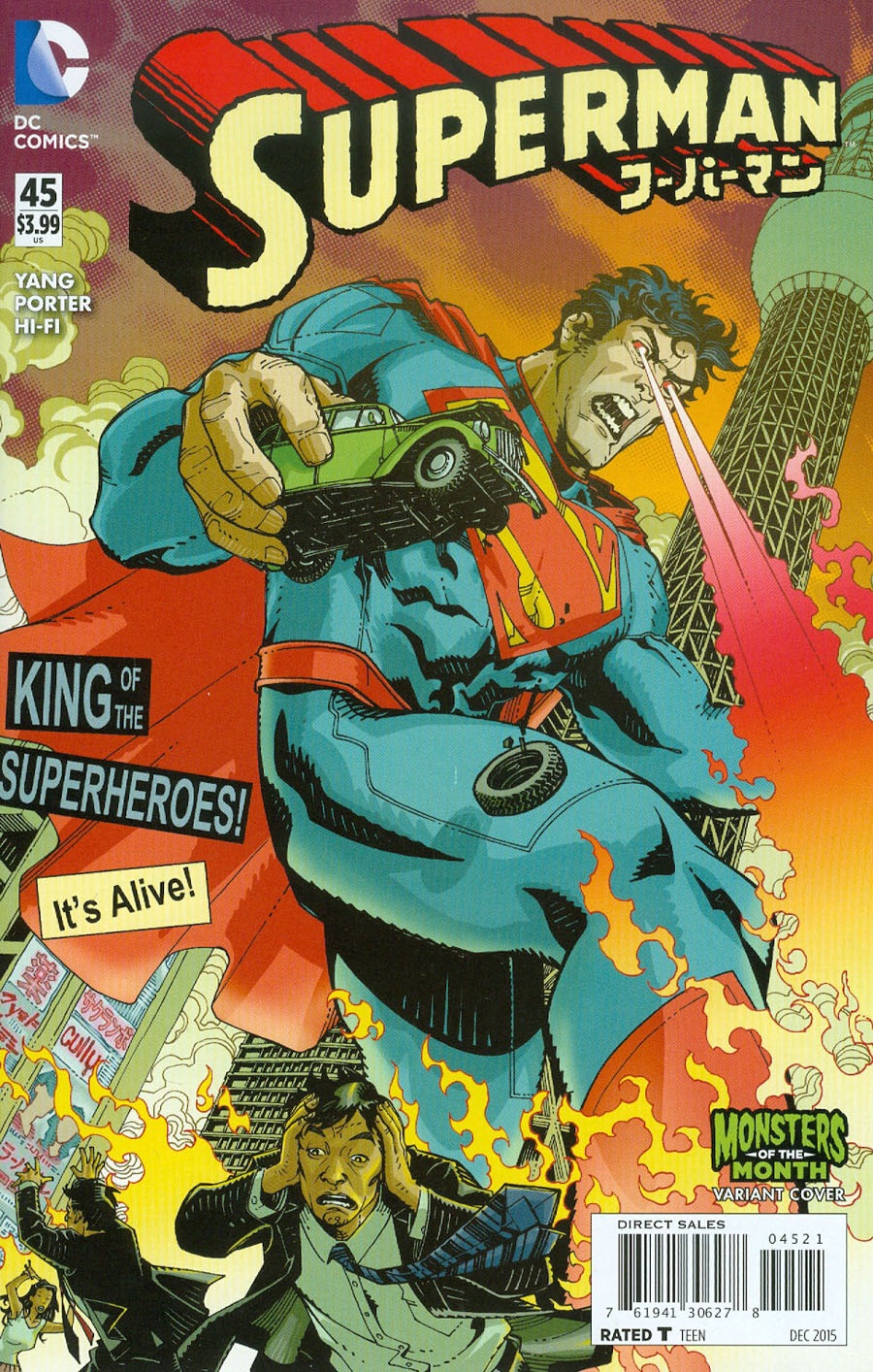 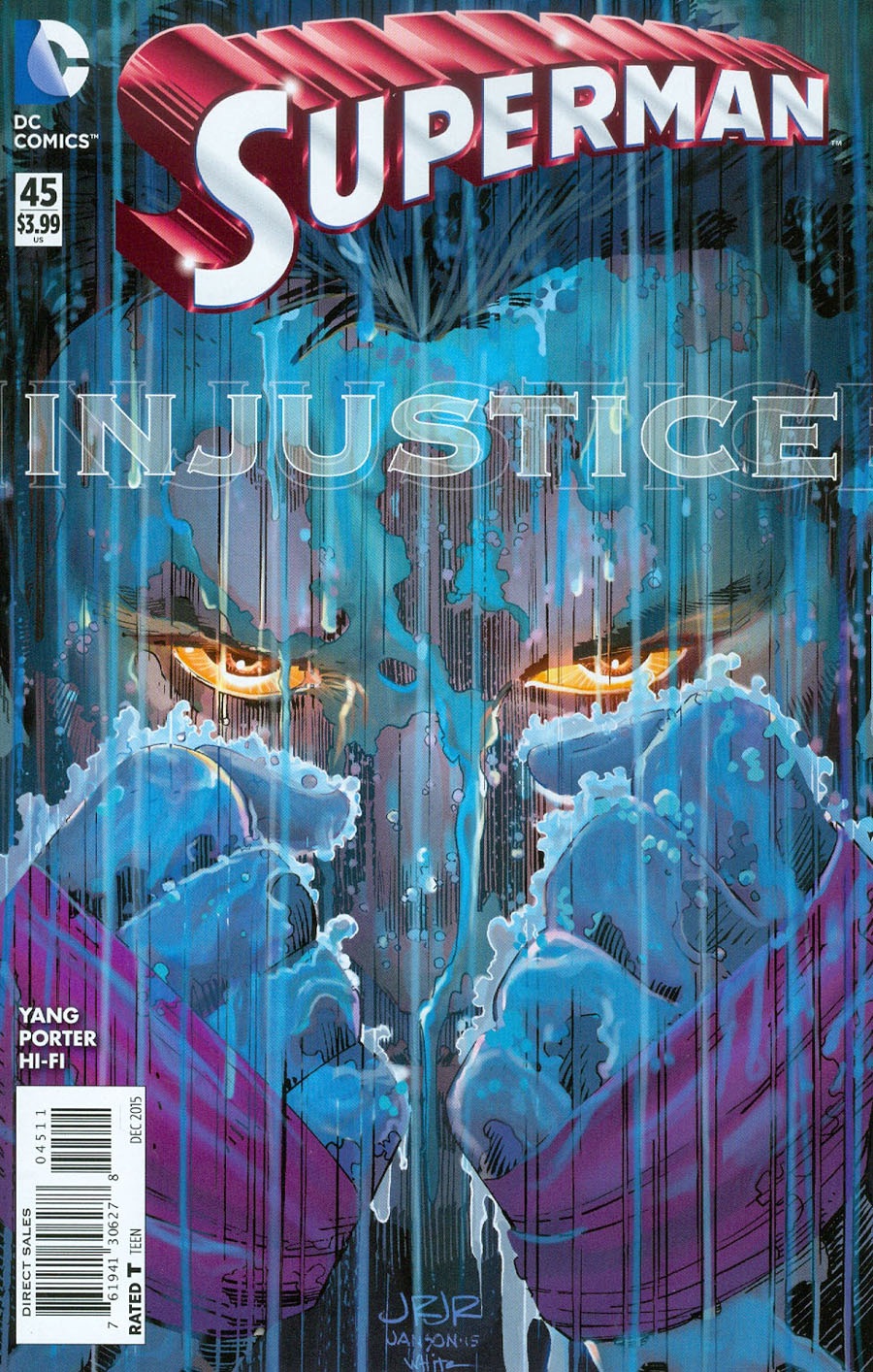 Click to enlarge
Clark in hiding goes over the events of the past few days in internal monologue.

He collates all the data on recent events in a small holographic orb, surmising that Hordr was perhaps part of a bigger picture, a larger plot out to destroy him.

Clark dons a baseball cap and sunnies to rendezvous with Condesa.

At World's Finest Café Condesa tells Clark about Sungetix. Hordr took over the company as a front, it was previously a legitimate business before Condesa helped them take it over. The bricks and mortar base is the only physical 'out in the open' lead on Hordr and it means Clark must travel to Oakland, California for any answers. At that moment Clark discovers Condesa betrayed him again, bringing Lois to their secret meeting. As his former colleague approaches to offer more 'help' Clark races away to the airport.

Unable to travel on a plane by conventional means Clark hitches a ride sitting atop a plane to California. Presumably with a burner phone Clark tracks down the head office of Sungetix and as 'Mr. Horaceman' he tricks his way into the building past a dotty receptionist for an interview. Once inside he sneaks into the restroom and discovers the Hordr_Plex portal and dons his 'pass mask' to enter.

Almost immediately Clark is met by Hordr_Root and demands answers, did Condesa trap him again? Hordr laughs that surveillance knew he was coming, he also points out, in years past hardware and software were co-dependent. Nowadays software is able to migrate without hardware, so if you destroy hardware it will just move on - with that his node (body) disintegrates into vanishing pixels.

The Sungetix receptionist appears and Clark realizes Hordr_Root can jump into any body he wants to. Hordr is now the receptionist. Clark wonders if it was Hordr_Root that had taken over Lois Lane to destroy him. Thinking back he remembers her voice was her own and that Hordr was present, no she did it willingly. Hordr also reveals that when he jumps into a body the personality in it is overwritten with his own. Hordr_Root summons a strange warrior called Apolaki to subdue Clark.

As Apolaki, attacks Clark, he smiles at Hordr and tells him that this base wont be secret anymore ripping the head off of a nearby Quarmer. Hordr is visibly upset as Clark forces the battle out of the Plex portal, through Sungetix HQ's wall and out into the street. Clark realizes Apolaki isn't human and with a head of a Quarmer he drains his foes life force until Apolaki melts in horror into a puddle of molten sand. Clark looks up at the hole in Sungetix to see Hordr has escaped and turns to speak to the crowd. After a flurry of cellphone cameras dissipates, he discovers that Apolaki was a celebrity 'super' prize fighter that recently went missing. Despite Clark trying to assure the people that Apolaki was not alive to begin with, the police arrive to catch a killer.

Clark bounds away to try and find 'The Thousand One House' that Apolaki was once part of. Since Sungetix has been exposed this is his only lead to track down his tormentor. Arriving at the club Clark is refused entry. He recalls how disappointed his dad was when, as kids he and Lana snuck into a movie theater without paying. He had never disrespected his father's memory until today as he sneaks in through a skylight. He had intended to pay for a ticket but as he hadn't eaten for days he buys as many tacos as he could with $19 while waiting for the main event.

Ringmaster Queen Shahrazad goads the crowd and introduces the main event: MYTHBRAWL! The crowd boos as she introduced Indomitable Haemosu. They chant for the return of Apolaki as Haemosu addresses the crowd trash talking his opponent Mayari. As the fighters duke it out Clark tracks down Queen Shahrazad for answers. Her man at arms Crow steps in when Clark tries to question her, breaking his hand in the process of swinging a punch. Shahrazad realizes it is Clark Kent standing before her and asks him why he is asking about Apolaki. When she reveals he loves his trash talking while fighting Clark realizes Apolaki was some kind of drone, clone or automaton, raising even more questions.

The investigation has to halt as Haemosu prepares a killing blow. Queen Shahrazad instructs him only to remove an eye and a disgusted Clark leaps into the arena to intervene. The crowd realizes it's Superman in the arena and begin going wild. As Haemosu is knocked out Clark is disgusted with himself for becoming part of the fight club. Once in the locker room Shahrazad reveals the Mythbrawl's origins. All the fighters are all gods and goddesses whose legends have faded. If their memory fades so will they and so they must fight just to exist. A twist is that after every fight any injury they sustain is reset, so Mayari has her eye magically restored.

Clark learns of the legend that is Mayari and Apolaki, siblings and also the gods of night and day in the Philippines. When Clark pushes to learn about Apolaki's disappearance from Mythbrawl Shahrazad offers him $500 and answers for a fight in Mythbrawl. Though Clark initially sticks to his father's ideals on not abusing his power and status, the temptation to not be destitute is too appealing, not to mention Apolaki is his only link to Hordr now.

Donning a cape once more Clark steps into the arena, no longer Superman the hero, now Superman the street fighter.

The more this prequel story progresses the more it just devolves.

I'm now at the point where I think they don't even know how this story will end - it's that bad.

I didn't like the comments about Jonathan Kent mainly because the writing and even Clark go against everything he stood for. I understand he has to do so to investigate Hordr especially as Condesa and Lois have proven untrustworthy.

It was interesting to see that despite everything Clark still seeks to see the good in people - his thoughts to justify Lois show he is conflicted, I hope they can come back from this. The bizarre curveball of Apolaki and the fight club has got me actually interested and I want to see where this is going. Unfortunately we know Clark will still fail as Hordr_Root, Wrath and Vandal Savage are still major players in the books set in the present. Where is it all leading? The main story has been going on forever and the only reason for this lead in was to show how the world found out about Clark Kent, now we have that answer what is this all about? I find I'm no longer interested in "How did we get to 'Truth'" but rather "When the hell is this awful arc going to be over?"

I would like S.T.A.R. or Dr. Veritas, someone with a modicum of knowledge on Superman to give us an answer as to how powerful Clark is now. His musculature has gone to steroidal levels - he couldn't fit in his armor or cloth costume now even if he wanted to. He is still powerful enough to survive sitting aboard an A380 but he can be killed by a penknife. He can crash through a wall unscathed, but he can drown in a puddle. Just some clarification from editorial would be... super.

The change in art is almost indescribable. People are in proportion, art is detailed, perspective is correct.

The dynamic art makes the almost insufferable writing worth reading, just to look at the spectacular layouts alone.

Howard Porter's arrival on this book is most welcome but like Eddy Barrows before him, the storyline/writing is letting him down and that is a shame because the art is fantastic.

Cover Art - 3: The influence of Ryu Hoshi of Streetfighter fame is fairly evident. As a motion cover I could really see this working well, especially if I was reading a Street Fighter comic or Chuck Palahniuk's Fight Club 2 comic. I'll say it again... I am reading SuperMAN not Super Streetfighter.

Monster Variant Cover Art - 4: I really like this cover. The translated logo, the Godzilla-esque pose, incorporating elements of Action Comics with a Japanese twist... more effort than most of the Superman themed monster month covers. The only downside is the coloring seems a little muted for what should be more about the horror spectacle.