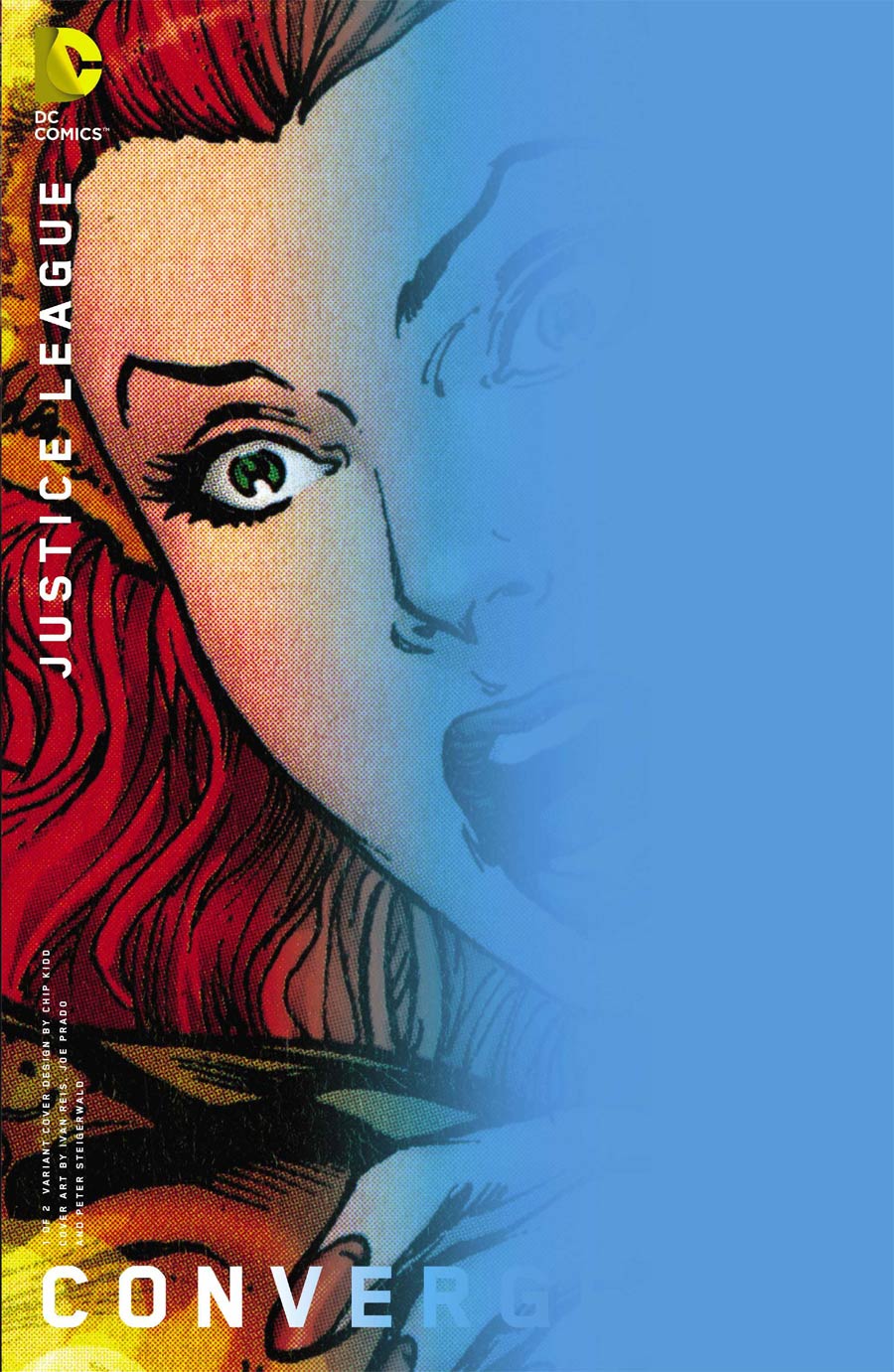 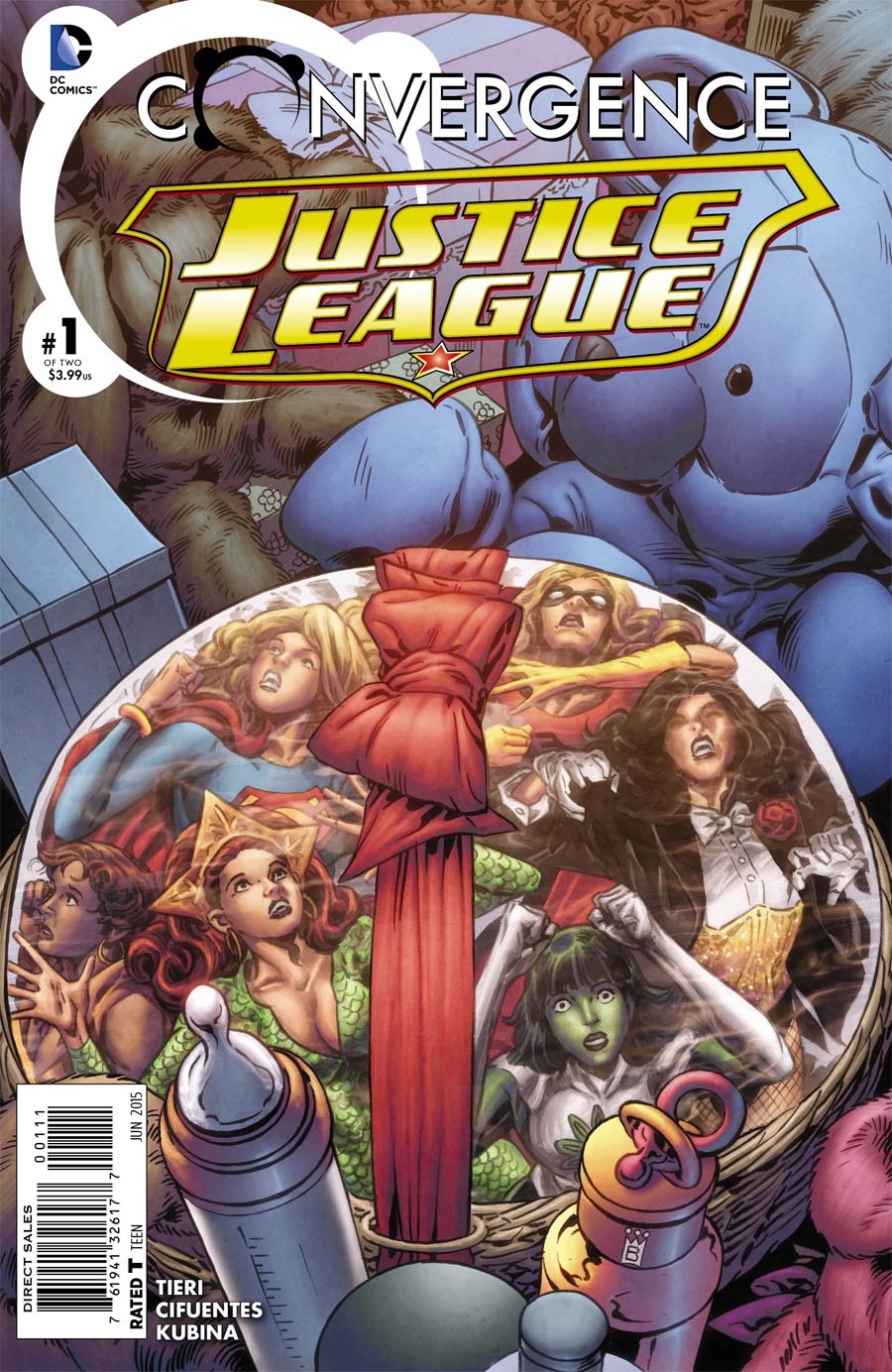 Click to enlarge
Supergirl rushes Jessie Quick to a hospital, as she has gone into labour during her baby shower. She is joined by rest of the Justice League, Jade, Zatanna, and Vixen. Congorilla seeks to enter, but that poses the obvious problem. Suddenly a dome appears, and the League is trapped in Gotham City. A year, we find the League having a girls' night out, when Telos appears and alerts them that they will have to compete for their existence. Elsewhere, Flashpoint Aquaman is torturing one of him men, when he is summoned to view Telos' message. Flashpoint Aquaman spies Mera, and makes plans to have her brought to him. While the rest of the League is getting up to speed, Mera is abducted. Flashpoint Aquaman tells Mera that they will learn to love each other, and that if she believes that the League can save her, she should think again, since he's summoned every sea creature imaginable to come fight for his cause, and the aforementioned creatures await his commands.

Story - 3: I had to go back and read a bot to find out what was going on at that time this group was the Justice League, and that in itself is the larger problem with this story. Why should I have to go back and read to get into this story? If I wasn't reading this League before, I doubt that they would appeal to me now. That being said, it's hard to gauge the dynamic of this League, aside of the barbs they throw at each other. I didn't realize that Mera was on the team until a year later, as she never appeared at the hospital when the others did. In contrast with Convergence: Superman #1, this lot doesn't seem to have been doing too much of anything, while stranded in the same city as Superman, who's been about his business, powers or not. We're brought into a scene of the team having a night out, but what for? While they may have deserved such an outing, readers aren't shown or told why. There is no clear focus to this story or the characters... which seems to be par for the course with too many of the Convergence titles and DC's overall direction.

If Convergence is a nostalgia trip, why would I be nostalgic about an under-established League, who seem to be more sitcom players, than superheroes. That is ultimately a problem with characterization. Supergirl, for instance, is a brute in this story, unreminiscent of Sterling and Igle's top treatment of her. She flies a pregnant Jessie Quick through a wall, throttles a jerk (how strong is she?) and punches out a released Kraken. Vixen and Zatanna are perpetually sniping one and other, while Jade is along for the ride. Is this the dynamic the team possessed previously? Do we care? The story reads like an assignment that needed to be completed by its due date, and little more else. A lack of familiarity doesn't mean that the book couldn't be fun and entertaining, but there has to be a commitment to doing so, and that has been supplanted by an apparent drive to just get the blamed thing out of the way.

Art - 3: Not the best, not the worst, but plain mediocre.

Cover Art - 3: This book should have come with a warning label.