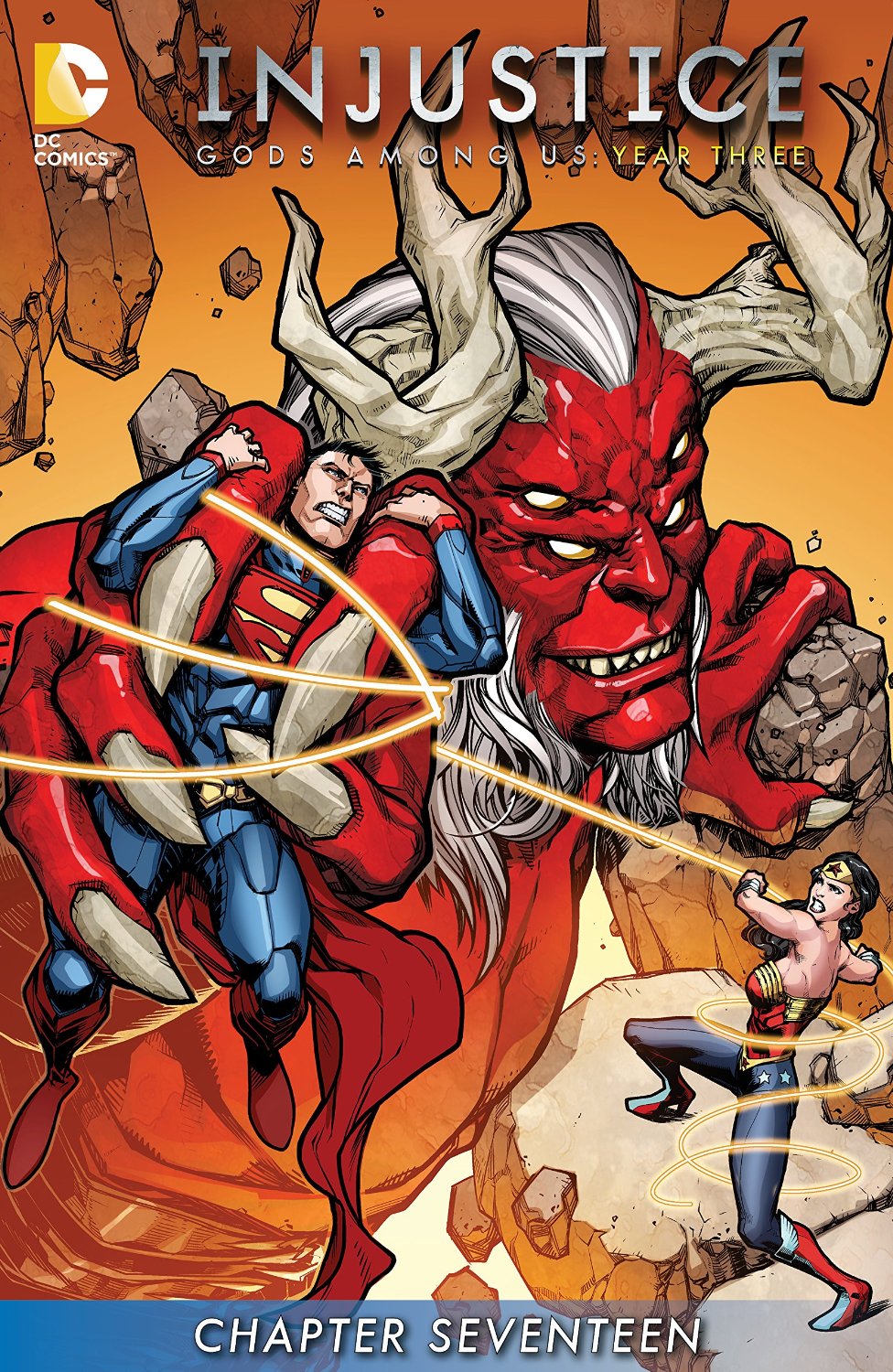 "Assault on the Tower"

Click to enlarge
Richard Grayson, the new, Deadman, flies to Arkham Asylum to speak with Jim Corrigan, also known as The Spectre. The scene quickly cuts to a battle about to begin between the Justice League and Batman's Insurgency. Regime Superman strikes the first blow, but is surprised to see that the Batman withstands the punch. Batman gives the order for his team to ingest the super-pills used by Regime's stormtroopers. Doctor Fate seeks to enhance the odds by confounding the surroundings of the Tower, making no way straightforward. Regime and Batman engage, as do the rest of the teams. One by one the League defeats their opponents, leading Constantine to wisely call for a retreat. However, Sinestro fries Klarion from behind, leading to disagreement with Sinestro, Regime and Wonder Woman. Constantine fires off his last gambit, and with a bit of magic, summons the father of Raven, Trigon.

Story - 2: A meme that's recently been ruminating in this writer's mind is the need for novelty amongst comic books readers, particularly superhero comic books. The fact that so many stories have been told with such a handful of characters, and those characters have existed for over 70 years, means that a long-time reader may be willing to sacrifice quality and consistency for a novel approach and great entertainment value. However, when that novelty begins to fray and the entertainment value is no longer there, you have this installment of Injustice: Gods Among Us. The writing here is little better than pedestrian. We lose pages on the looked for action between the League and the Insurgency, just to see Deadman (Nightwing) fly and ask a question. When the action does take place, once more the book reminds us of its schizophrenic nature. It was posed as a question before, and bears repeating here: Who is in the wrong? Regime, who has decided to assert his will on the Earth in order to make it better? Batman, who seeks to stop Regime's march to power? Wonder Woman, who crushed a man's skull and armed violated women so that they could kill their assailants? Does there need to be a wrong, principal character? Yes, yes there does, as if there isn't, this particular story is meaningless. This issue goes a long way towards undoing much of the groundwork that was lain in the last two years, and asks readers to apply layer upon layer of stupidity to allow it to entertain them.

The meme that is Batman vs. Superman is also on my mind these days, and there has been a lot of push to make it the norm; so much so that it invades even light-hearted fare, such as LEGO Batman. There has been every excuse made to allow Batman to survive such an encounter, so that when we now have a situation that strips him of these exemptions, he still survives. It's obvious that Batman is the head of what resistance there is against Regime, so the expedient thing to do would be to remove him from the playing field. Quick, painless, just take him out. However, even with Regime willing to do whatever it takes, Batman is still alive, fully functional, etc. Wonder Woman has the temerity to take issue with Sinestro's tactics, while she herself has done much, much worse. It just doesn't make sense and it makes for a confounding read. Either Regime is a despot, ready to use the most expedient method to remove those who would challenge him, or he's a vacillating bully, who has no idea what to do with himself. It cannot be both ways. Then again, so long as the contingent of readers who support Injustice weekly aren't concerned with such integral points, perhaps it can. It will make for a generic read, which Injustice, I'm told, breaks away from.

Cover Art - 4: Really cool! Worthy of the Bronze Age covers that sold so many comics.