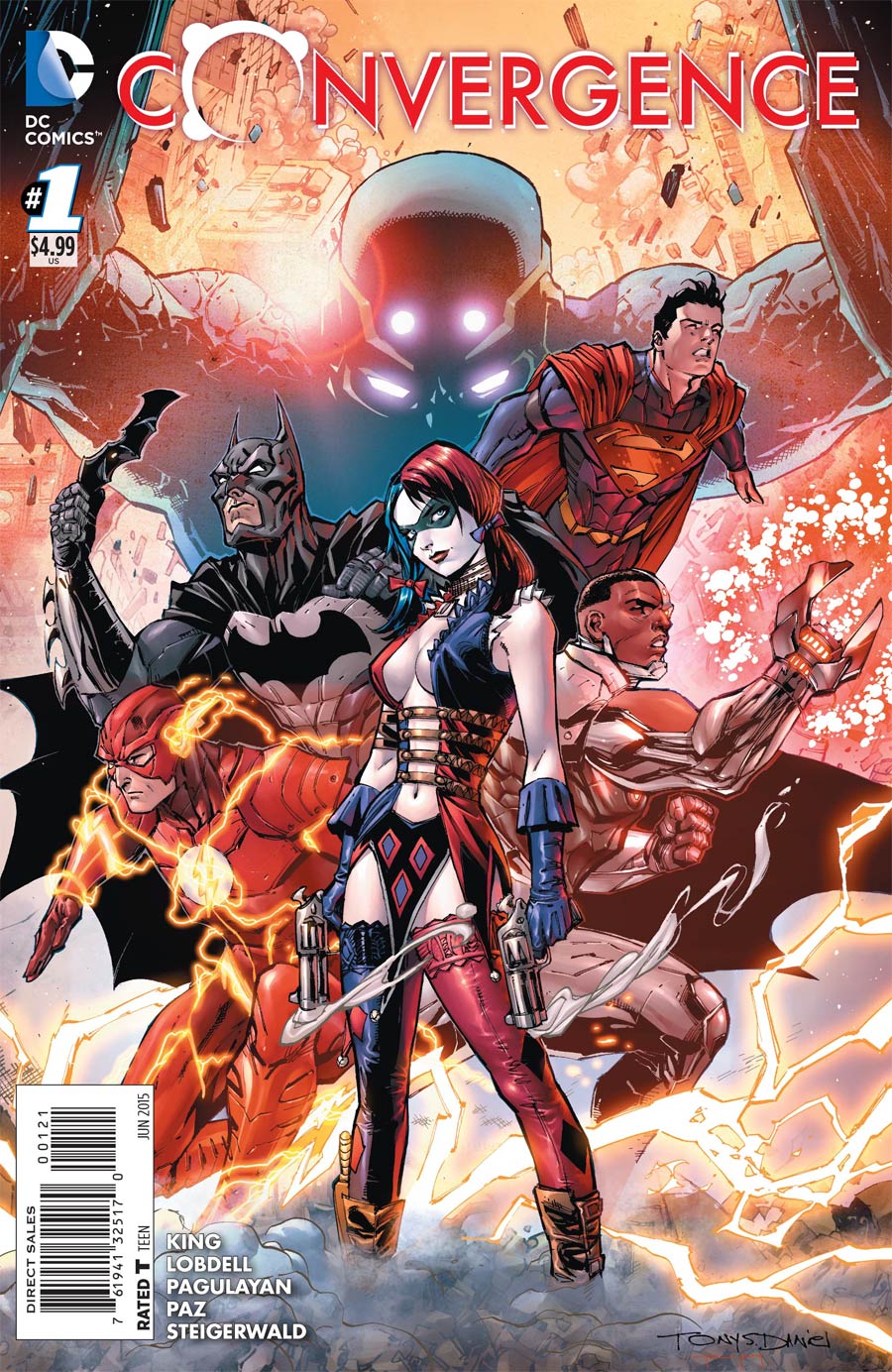 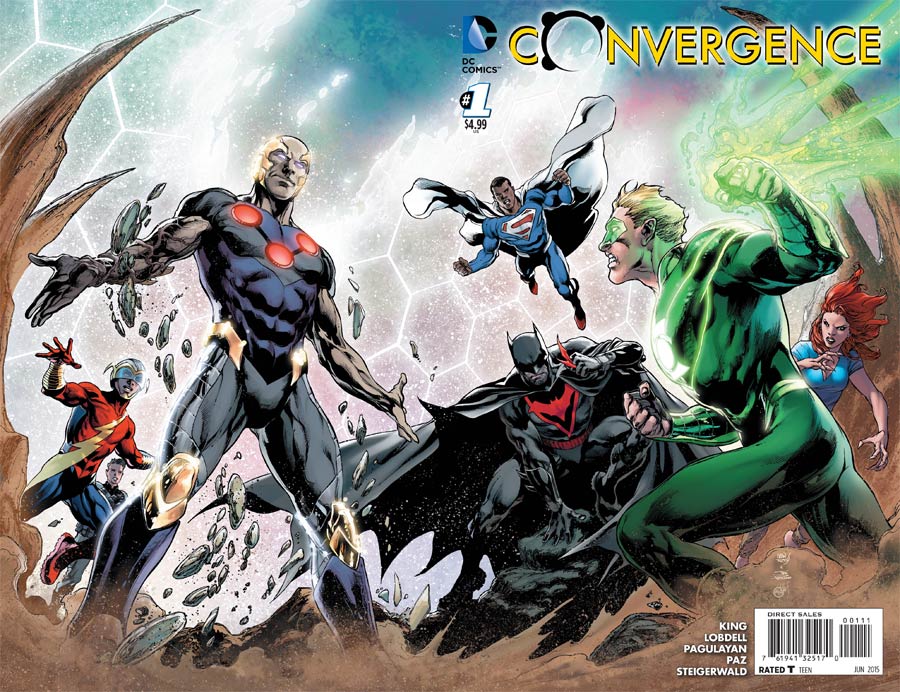 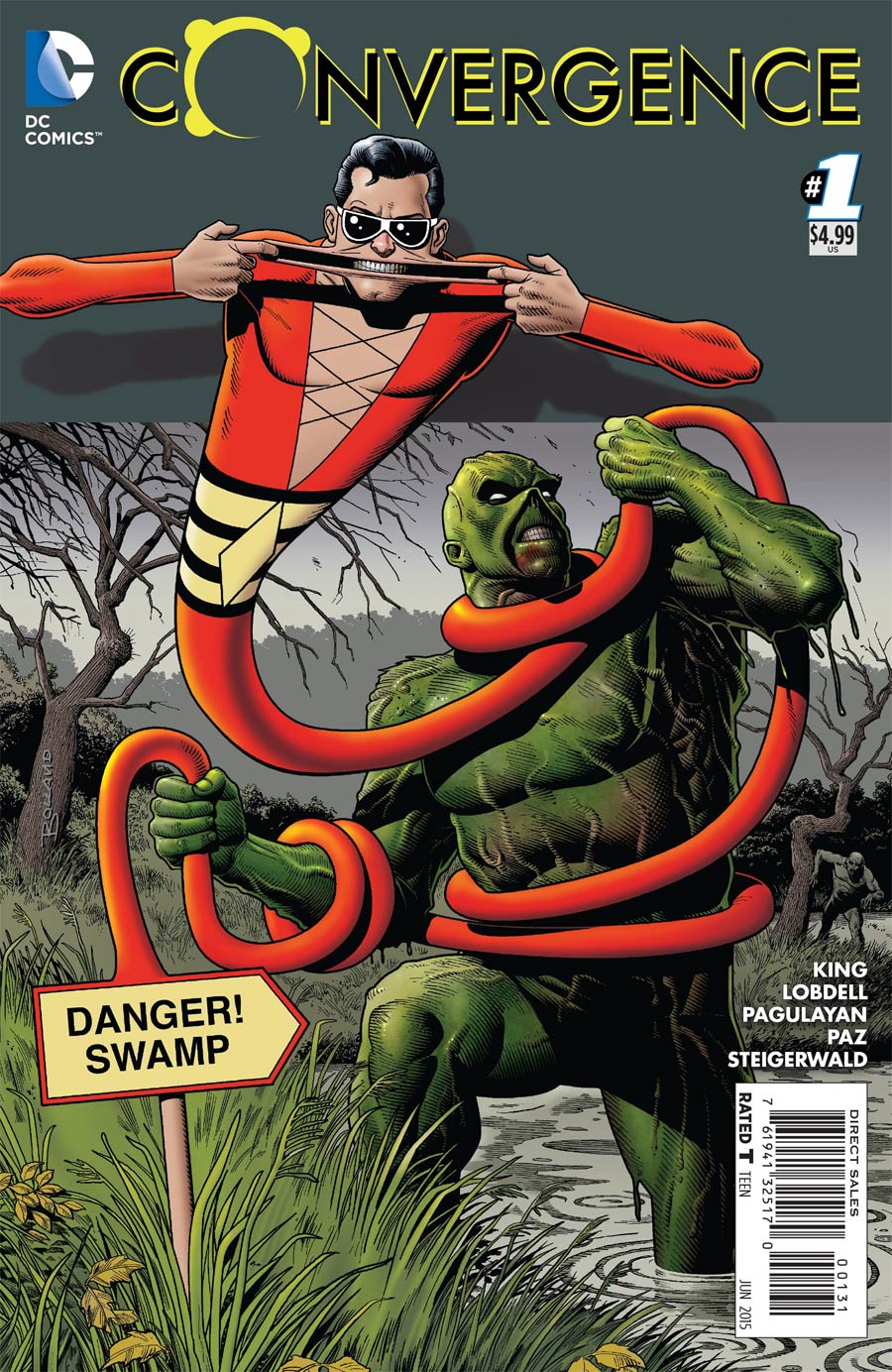 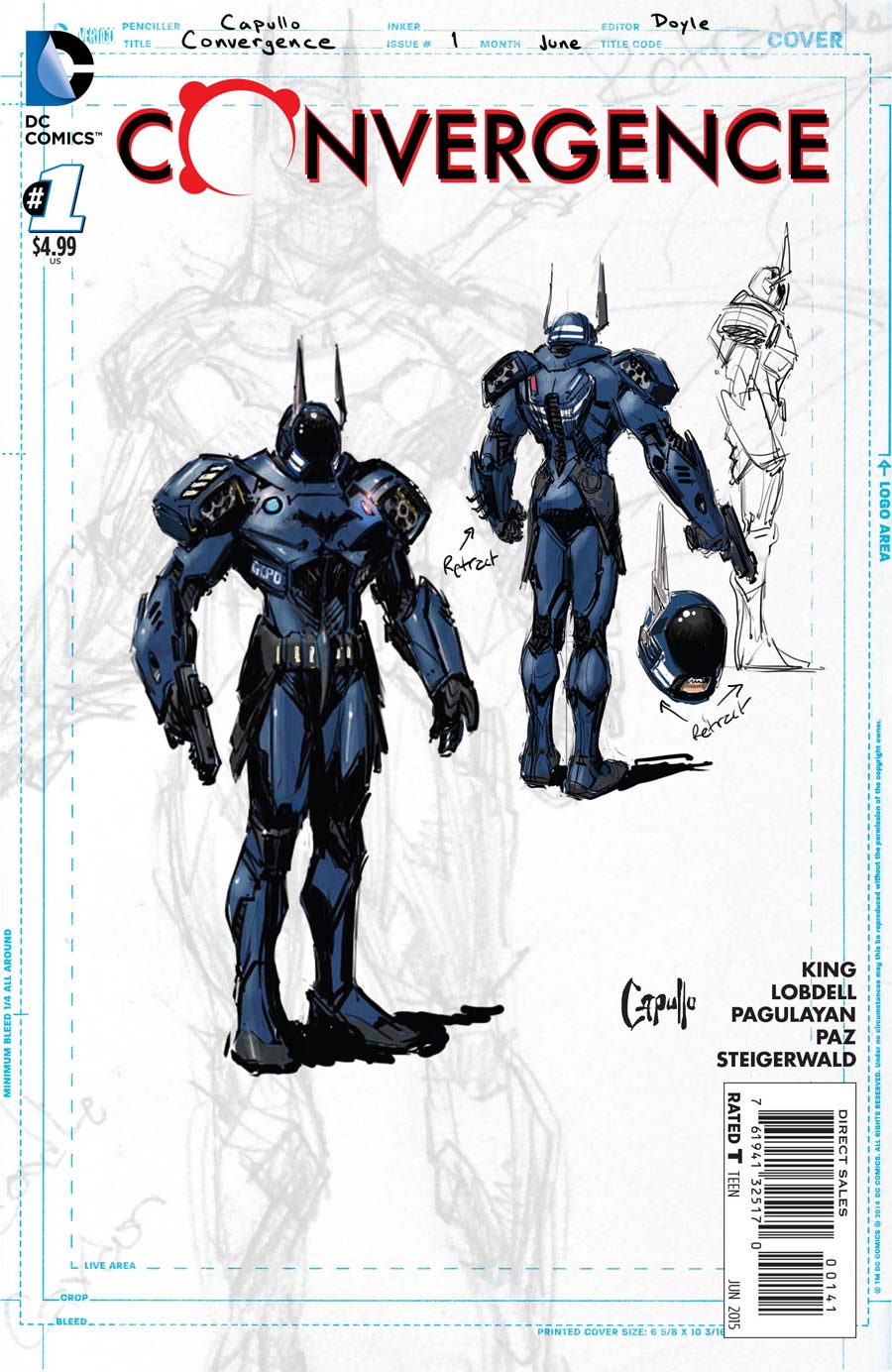 In the 'Injustice' universe, Superman has regained his powers and is free. Batman urges him to help him save Gotham from the natural disasters that are tearing the city apart. He refuses.

An omnipresent voice tells them they are unworthy. They must be destroyed. Superman, any remaining citizens, and the few leaguers still alive, are snuffed out.

Elsewhere, Earth-2's Batman, Dick Grayson, Flash, Green Lantern, and Superman are teleported onto the planet without their city. (It has already been destroyed by Darkseid).

Flash and Dick argue amongst themselves. Buried alive, Yolanda Montez unearths herself. She and the other avatars of earth had sacrificed themselves, but she has been given another chance at life.

Liquid metal attacks the team. A dome begins to form over them, suppressing their powers. Superman stops the formation of the dome. Telos appears.

Telos explains the situation to the Earth 2 characters, and then again to the others captured in the various domed cities. Brainiac has collected them. Now they must fight. Only one will city remain.

Story - 1: Jeff King and Scott Lobdell absolutely refuse to move the story forward. Despite the previous "zero issue" having no effective progression or characterization, the creative team has decided to replicate its plot in this issue. Though we are introduced to more characters, nothing new is explored. The only new information the characters learn are the few things that the reader has already learned in the previous issue. The only thing worse than thirty pages of rudderless "story" mired in complacency and confusion, is sixty pages of "story" mired in complacency and confusion.

The reason I put the word story in quotations, is because of how loosely I am forced to use the term. Every story should have a 1) character with a goal, 2) motivation and action to accomplish that goal, 3) an obstacle to obtaining the goal, and 4) an outcome to the striving to obtain the goal.

If you aren't reading the Earth 2 books, then you are not familiar with the characters. King and Lobdell do very little to explain who the main players are.

The characters squabble amongst themselves so much, they barely have time to articulate their goal of figuring out where they are, and why they have been taken.

If the liquid metal is the obstacle to obtaining the character's goals, (instead of a page waster) it is delivered prematurely. It attacks them before they attempt to do anything proactive.

Finally, we do not get an outcome of any kind. Good or bad. Not even on a minor level. Not a single character even attempts to achieve anything in the entire book. (Besides, perhaps, Telos - the antagonist).

This issue has so many problems similar to the previous one, that it is reasonable to guess, that the zero issue was mandated after the series had already been plotted and outlined. Perhaps the original plan was to use issue one as a teaser. When they were told to write a zero issue, the writers decided to... tease the teaser issue? I don't know. But it is the only reason I can think of that would explain three professional writers wasting the near entirety of their first two issues of a major event.

According to DC, the idea of Convergence was conceived to put the main books into stasis. That would allow the DC offices time to move from New York to LA. It would also facilitate the exploration of past character and storylines, and provide the ability to softly reboot aspects of the New 52 universe that weren't working. The miniseries would serve as the spine for fan-favorite spinoff stories.

But instead of spurring fresh and creative ideas, the main series feels more like an obligation, springing form an editorial mandate to justify the revisitation of the pre-New 52 characters.

Contrary to popular belief, there is nothing wrong with an editorial mandate per se. True, the editors can abuse this privilege, but mostly, the onus is on the writers to mask the machinations of the powers that be. They should write a story that seems fresh and spontaneous, regardless of where or how the story idea originated.

But to say that King and Lobdell fail to take the mandate and make it their own vibrant, exciting idea, is false. The truth is, they haven't even tried.

Art - 5: Carlo Pagulayan does great work here. He is helped by having a more kinetic, action-oriented script than Ethan Van Sciver had last week. Though he doesn't have the big 'name,' Pagulayan is clearly up to the task.

His style is more 'cartoony' than EVS, but it gives a lightness, energy, and adventure to the book which makes an otherwise boring read more engaging.

The color scheme is a dramatic improvement. The drab monotone color palate from the previous issue is gone. The tones are vivid and the colors, richer. I knew before checking, that the colorist had changed from last week. Good move.

Cover Art - 5: It depends how one decides to judge this cover. Some images show the whole cover, others show a single page.

That single page cover looks like half of an image. Because, well, it is half an image. Green Lantern takes up most of the shot. The line and energy draws the eye off the page, where Telos should be. It doesn't work.

But viewed as it should be, as whole two page wraparound image, the cover is flawless.