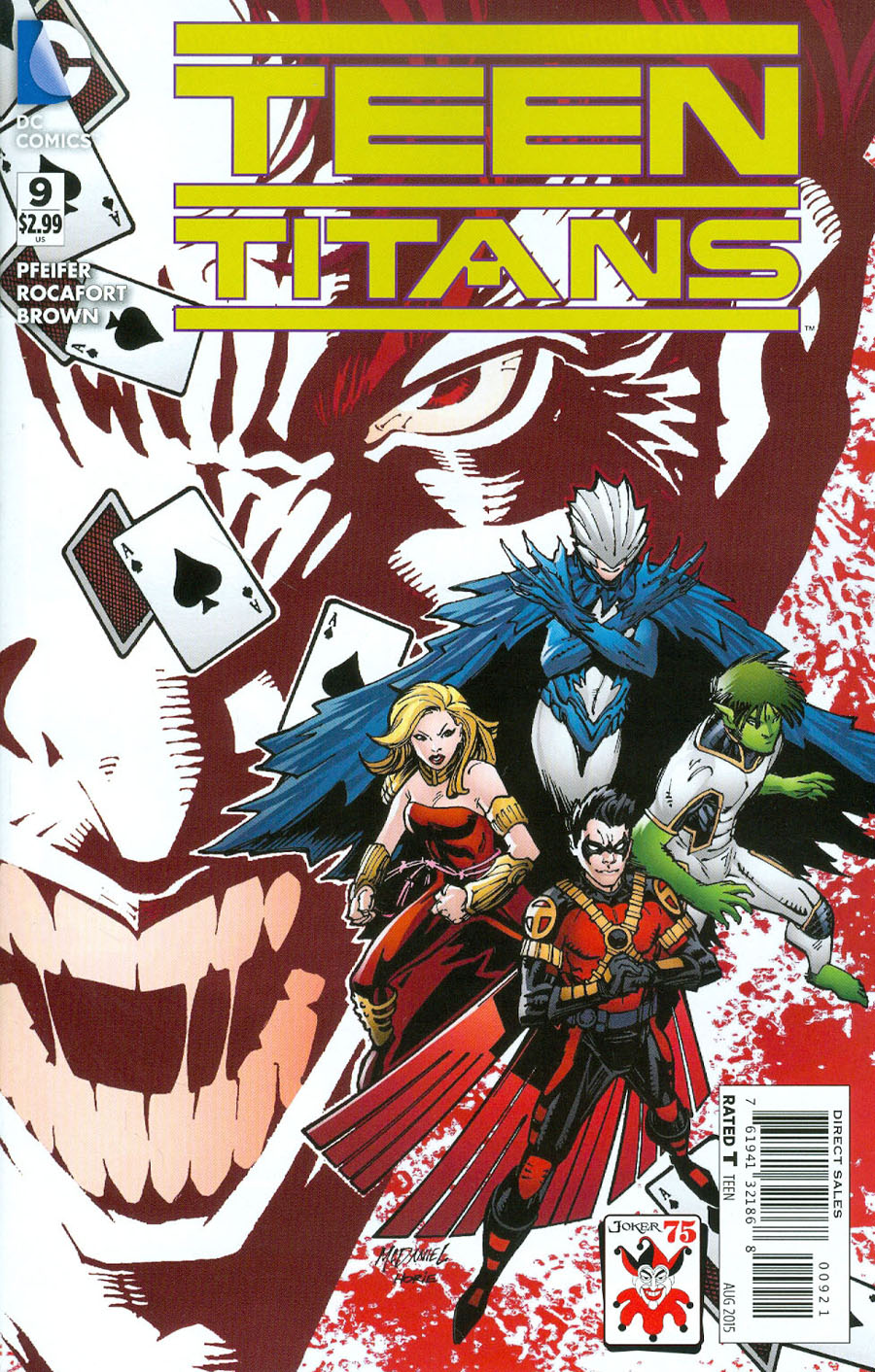 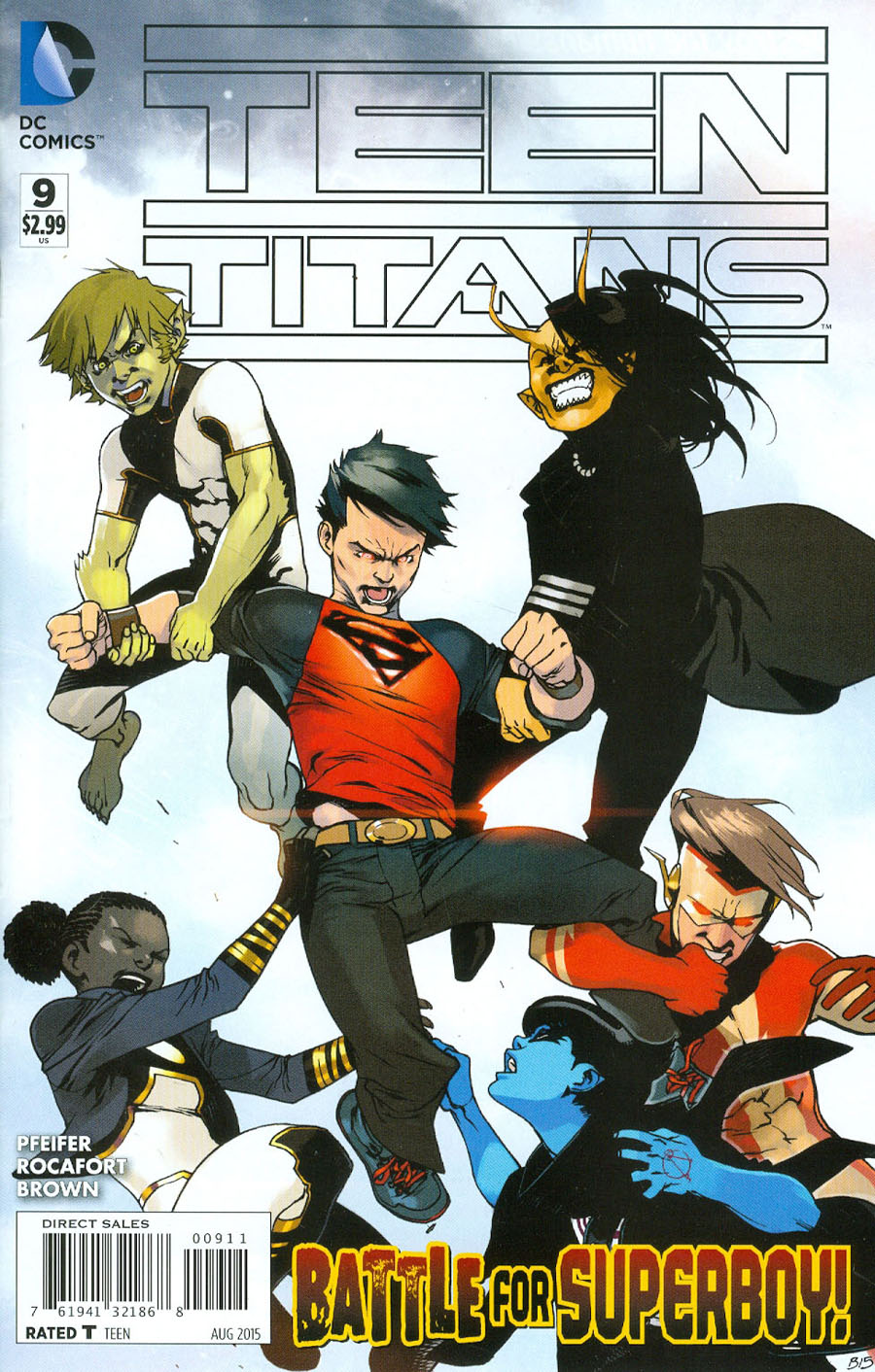 Click to enlarge
We open with Robin and Ra'ut L'lwer atop the John Hancock center in Chicago, conversing over how Ra'ut L'lwer grew up on a planet that was flat, and that being so high up above ground is overwhelming. Ra'ut L'lwer tells Robin that she doesn't believe that Superboy is responsible for killing her people (See Teen Titans Annual) and assures Robin she will help keep him safe and alive until they find out who the real killer is.

Ra'ut L'lwer asks about Superboy, and Robin tells her, he is blowing off some steam, flying high above the city. Robin and Ra'ut L'lwer leave the top of the tower and return to their luxury apartment, where they are hiding out for the time being. They switch on the news, and see that the media is still reporting on the Massacre that Superboy is supposedly responsible for. (Again see Teen Titans Annual for more about that story).

We cut to Raven, Bunker and Beast Boy in downtown Chicago going for a "stroll", when they are recognized by a couple of goth looking teenage girls, and soon a crowd forms around them taking pictures and asking for autographs.

Meanwhile at the top secret Star Labs training facility, we see Manchester Black discussing with one of his workers, how he was wrong to underestimate Robin, and how they let the Durlan shape-shifter (Ra'ut L'lwer) get away with the help of Superboy, and how the super powered teams could be really dangerous. He states that soon, one of the Teen Titans will slip up, and they will be able to recapture them.

Cutting back to Raven, Bunker and Beast Boy, the crowd has gotten bigger and out of control. The crowd starts to overwhelm Raven and her senses, and she has trouble staying cognitive. A young woman is knocked off of a train platform close to where they are, and onto the tracks, with a train headed straight for her. Beast boy transforms into a cheetah, and attempts to rescue the woman, but realizes that he will not be able to get to her in time, Bunker attempts to stop the train, but is unable to do so.

Just before the train hits the woman, Superboy swoops in, and stops the train using his TTK (Tactile Telekinesis) powers, and manages to fly the woman to safety of the platform.

The ever growing crowd begins to fear for their safety at the sight of Superboy, with some of them asking Superboy, if he will or intends to kill them also, like he supposedly did in the news reports. Superboy states that he just wanted to help, when a beat cop wondering what the fuss is all about pushes his way to the front of the crowd. He attempts to call for back up, and pulls his gun on Superboy, attempting to arrest him. Superboy angers at the sight of the gun, uses his TTK powers to destroy the officers gun.

We then see Robin and Ra'ut L'lwer learning about the incident through social media.

As does Manchester Black at his facility also.

Manchester Black then heads into a training room, where Wonder Girl and Power Girl are both training/sparring. Manchester Black informs the two girls that they have a fix on Superboy and the Titans, and assigns a team to bring them in, consisting of Wonder Girl, Power Girl, Kid Flash Guardian, Klarion and Trinity.

When Wonder Girl and her team turn up to the spot where Superboy and the others were just at, Kid Flash calculates where they may have gotten to, and that team transports away with Klarion's help.

Once Superboy and the others return to the apartment, Robin gets in Superboy's face about compromising their location, by crashing into the apartment through the ceiling.

Raven quietens everyone and informs them that the other team is here, just as Wonder Girls breaks down the front door and demands that they hand over Superboy... "Now"!

Story - 4: Let me state from the start here, there is only two reasons I came back to this book.

And secondly, because Kenneth Rocafort was drawing it (more on that in the art section).

This is me jumping back into current comics. A couple years back, I dropped buying all new comics, as I felt that they weren't for me anymore (also I had some heavy stuff happening in my life that I had to deal with). I'm not going to bash on the New 52, but it's not my thing, so I quietly left, leaving it to those that enjoy it. Did I miss buying and collecting current comics, of course I did, but I couldn't shell out so much money for something that I didn't enjoy that much anymore.

With that said and done, I must say, I enjoyed this issue a fair bit. So much so, that I went back and bought all the issues from when this series was relaunched last year. Pfeifer and Rocafort have done a good job so far, and the Annual heralded the return of Superboy to this team. So they managed to suck me back in and buy the back issues. Quite frankly, I'm happy to come back to it. I really did enjoy this book.

Will Pfeifer did a great job with the pacing. Nothing seemed out of place. He also did a more than decent job of handling the different personalities of each character. Sometimes in an ensemble book, characters can fall in the trap of becoming generic and interchangeable. Thankfully Will Pfeifer avoided such a trope.

Even though Superboy was the main focus of this issue, every character served a purpose, and didn't feel lost.

Another thing I enjoyed was the good use of social media and cellular devices. Often times in some comics, these seem to be added in for exposition, in this issue, they seemed to fit organically. All in all, I was really pleased with this issue. If to regular readers it seemed a bit out of sorts, with new characters and the splitting of the team. I recommend going back and reading the Annual that was released last month. It features the return of Superboy and the introduction of Ra'ut L'lwer.

Looking forward to where this story line leads. Next issue seems like it will be a showdown between Superboy and Wonder Girl... Exciting!

Art - 5: I'm an "art guy," and always have been. In fact it's one of the primary reasons I read and collected comics most of my life. Being an artist and Graphic Designer myself, I really get a kick when an penciller/artist does something new and/or unique with a book.

I am a huge fan of Kenneth Rocafort, and believe that he is one of the best artists in the industry at the moment. He is a huge asset to DC, so I pray they are able to hold onto him for a long time! He is the reason I started collecting Redhood and the Outlaws when the New 52 started.

For those that may not know, Rocafort has had two short runs on Superman in the past few years. First was Pre-New 52 with the "Reign of the Doomsday's" story line, and then he took over the New 52 Superman title with former (New 52) Teen Titans writer, Scott Lobdell.

Rocafort on Teen Titans is a no-brainer. His style brings a kinetic energy, that is expected from a title such as Teen Titans! As well as the contemporary look he gives the characters in their "civilian" identities. His page and panel layouts are so out of this world, that you can't help but compare him to a young Neal Adams in the 70s! Each page is filled with so much detail, it enhances the story a great deal An example is page 16, there is a tiny panel of Superboy approaching Bunker, Raven and Beast Boy, which organically leads into him picking up the team and flying them home.

The two page splash (page 2 & 3) of Superboy is poster worthy, and is only that much more enhanced by Dan Brown's colors. I like the "effects" that Rocafort does when Superboy uses his powers. I feel he does a better job than any other artist has done in the past. Also the same can be said about Beast Boy's transformation scenes.

His Manchester Black looks very contemporary, and sinister at the same time.While no one has done the lightning effects this good on any of the Flash related characters in quite some time. Kid Flash's "speed lightning" effects look very "energetic", and Rocafort does a better job on drawing the New 52 costume of his, than anyone else has done so far... In fact the same can be said about Robin's and Wonder Girl's also.

Honestly, I cannot say enough good things about the art! I love it, and really hope Rocafort stays on for a long time. There were a few people that didn't enjoy Rocafort's work on the Superman title from a couple years back, mostly due to his pencils not getting inked. I'm glad that the digital inking techniques used have gotten better in being able to enhance his work.

Dan Brown makes good use of his color palette. I like when colorists aren't afraid to use bright and striking colors, they really leap of the page!

This is comics, lets not wash them out like they do in the comic related movies at times. Lets embrace the color!!

Also good to see Beast Boy green again! I didn't mind when he was a shade of Maroon, but I prefer the green.

Cover Art - 5: This is a good composition, with Superboy front and center. I like how the "Runaway" Titans (Beast boy and Ra'ut L'lwer) are pulling at Superboy's arms, while id Flash, Power Girl and Klarion are tugging at his legs. The fight for Superboy is on!

Variant Cover - 4: I have been a fan of Scott McDaniel since the 90s with his work on Nightwing, followed by Batman, but what I remember most fondly is when he did a run on Superman in the early 2000s. Even though this cover is a generic tie in to the Joker's 75th anniversary, its still a striking cover.