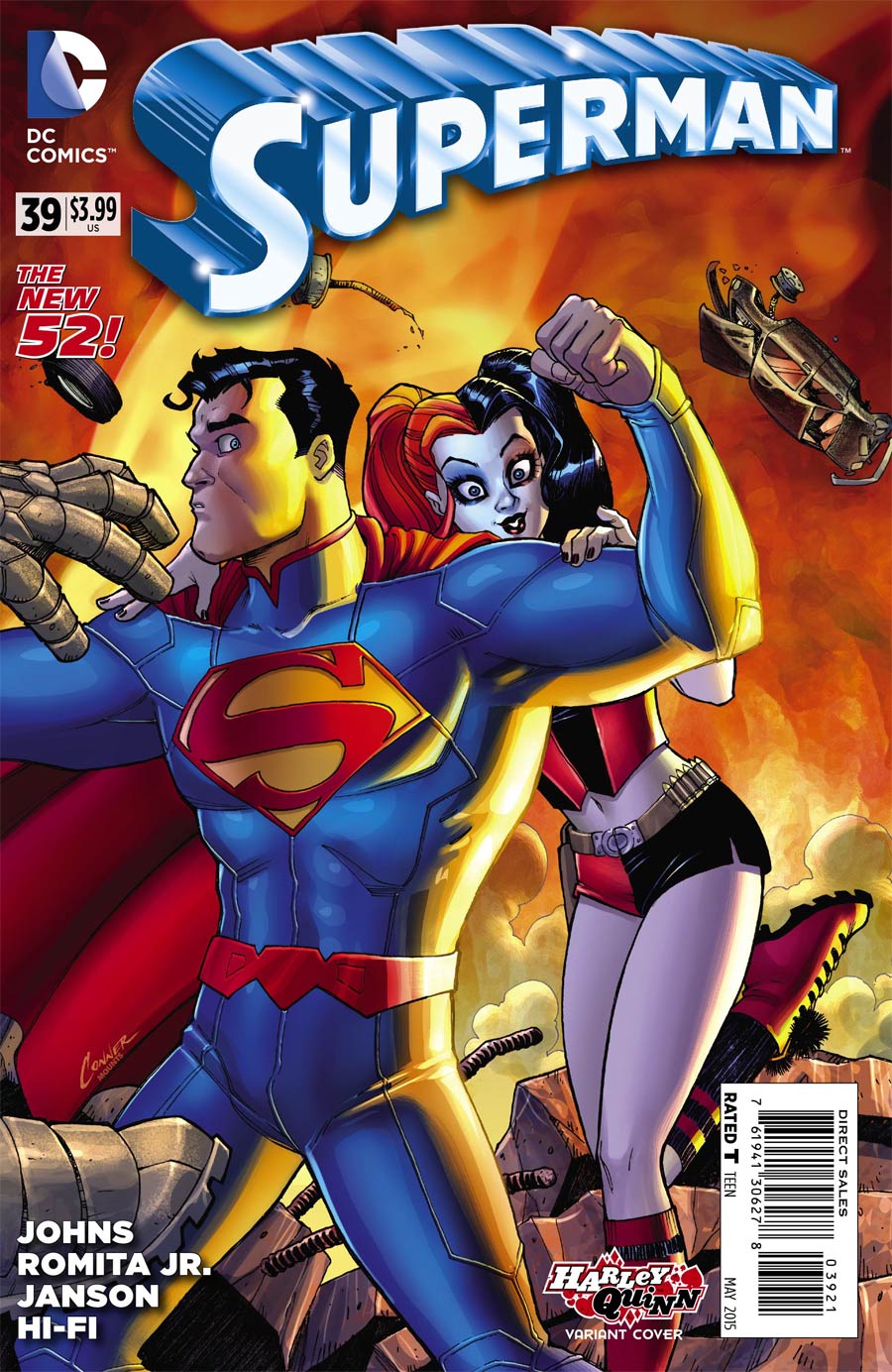 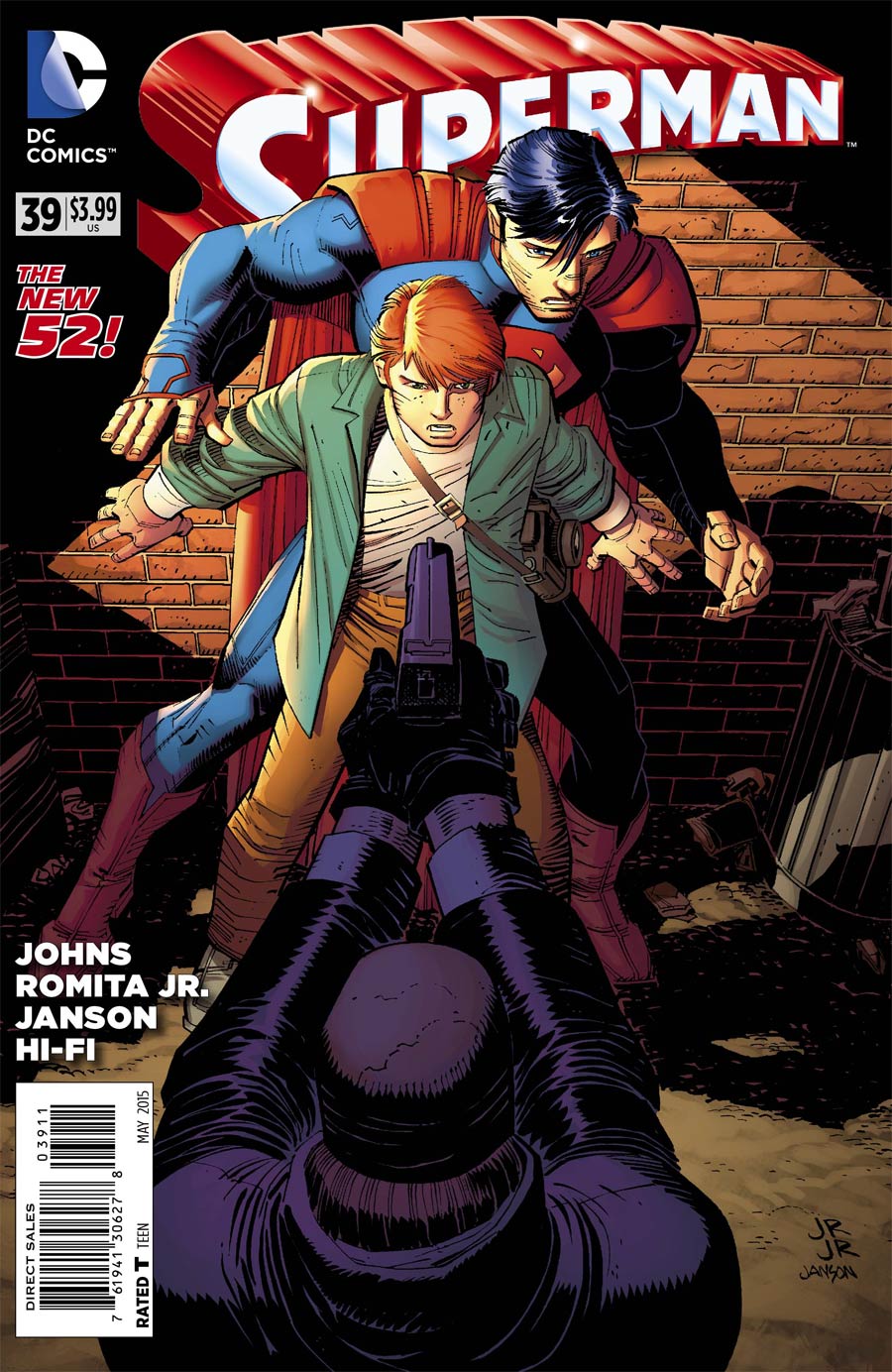 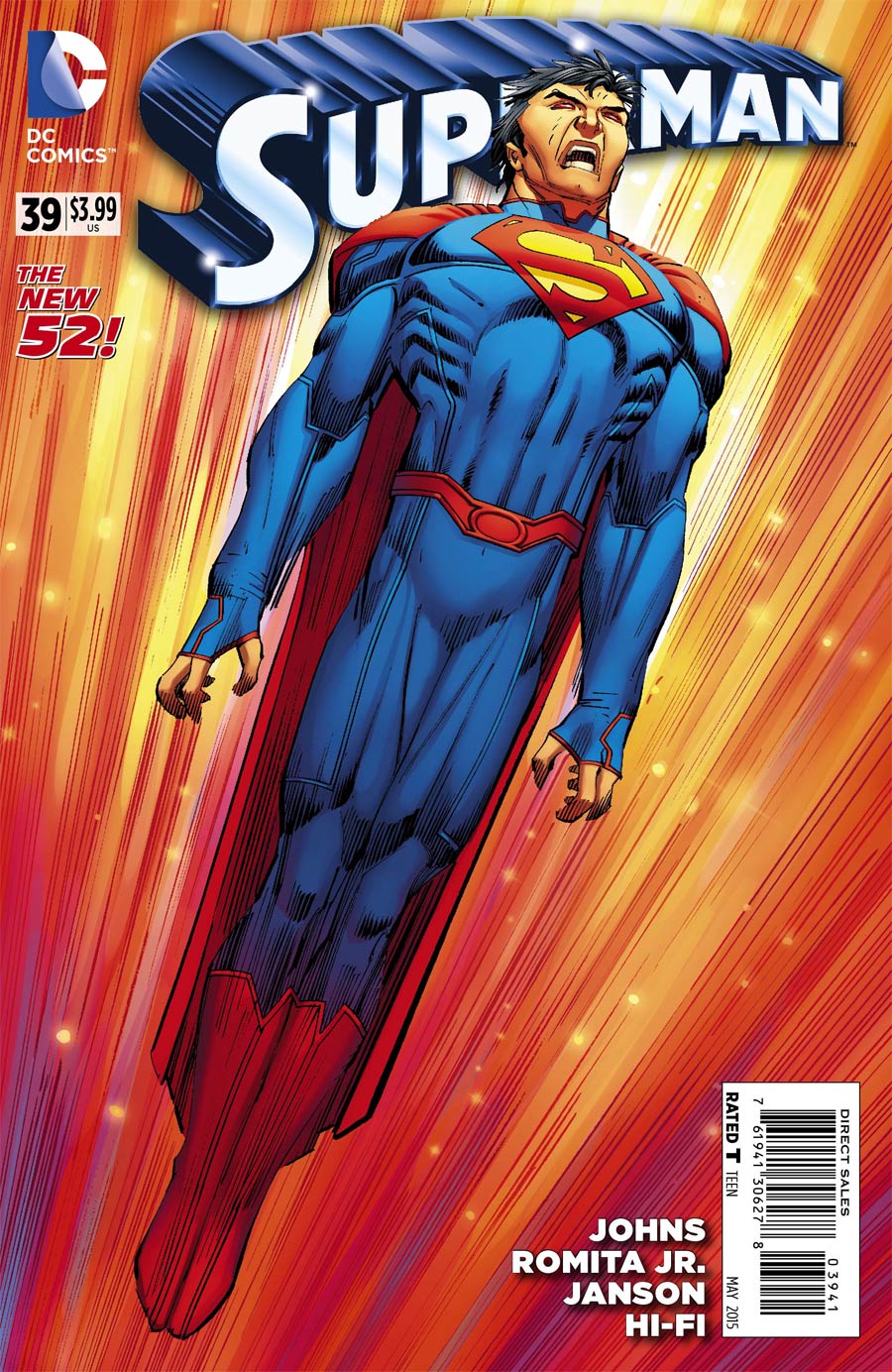 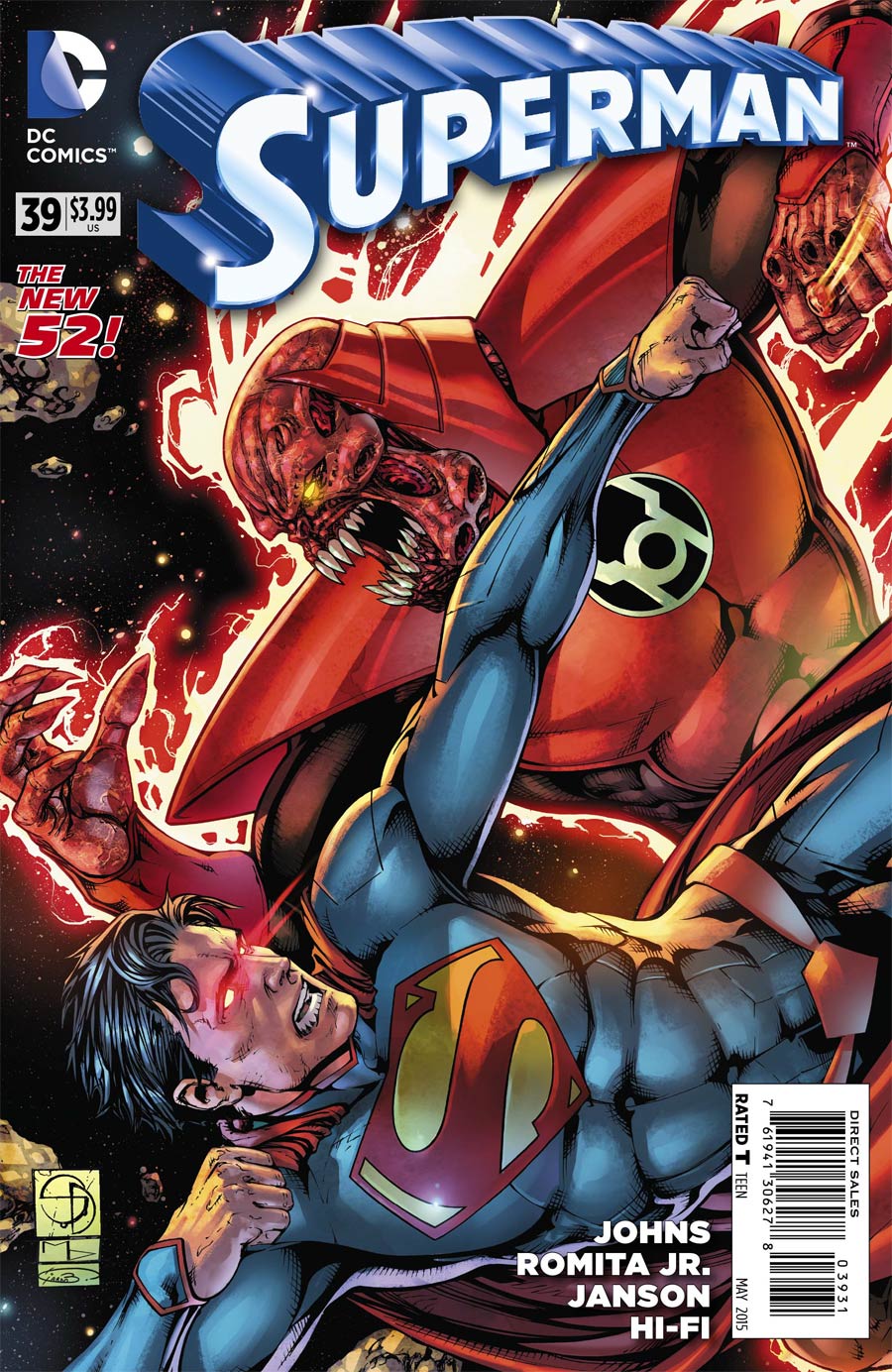 Miss Janet, in Kansas, delivers a package to a mailbox for Clark Kent on behalf of the mysterious man that has been monitoring Superman since the arrival of Ulysses. He is revealed to be Mr. Oz but then we move to Metropolis where a bombshell has just been dropped.

Clark Kent has revealed he is Superman to his best friend, Jimmy Olsen. As expected Jimmy is awash with emotion and demands his friend take him flying - which, because of the solar flare Clark used, is now something Clark cannot do.

Jimmy is immediately skeptical and cites the fabric costume as the reason. Clark shows him how his spectacles alter his eye color and shape with their dummy prescription and Jimmy softens as they go for a walk with Clark now in his civilian clothing. Recounting the events leading up to the present, Clark reveals that he is powerless for the next 24 hours until he can regenerate his abilities. Clark misses his superpowers and feels awkward that he can't fly to work, nor dress correctly for the weather, something his powers usually make effortless.

While the two friends walk through a park, a young boy retrieving a kite from lofty tree falls and without a second thought Clark leaps to catch him. Jimmy notices a tear in Clark's suit and a bleeding graze. Clark shrugs that he has bled before but Jimmy points out its never really from everyday life but when a gigantic foe like Mongul throws asteroids in his face. The two arrive fashionably late to a bullpen meeting with Perry, Lois, Steve and other Planeteers. Perry welcomes Clark back and praises him on the front page story about Ulysses. Lois grins and tells her friend that it's the first and last headline he'll enjoy now she too is back on the beat. Clark smiles leafing through the copy and gets his first paper cut. Steve laughs at his co-workers' wimpishness but a staffer interrupts the bonding with an alert of a robbery and hostage situation.

Clark darts out onto the street with Lois & Jimmy playing catch up. They lose Clark in the crowds and he vanishes into an alleyway. Lois is smug that they arrive before Kent and attempts to scoop him. Jimmy is taken by surprise as Clark arrives suited up as Superman. Jimmy is fearful as Superman walks through the crowd up to the gunman. Clark reaches out to the man pointing out he hasn't hurt anyone yet and shooting a bulletproof man would achieve nothing except an arrest. He will go to prison for the robbery but for a far shorter sentence than if he killed his hostage or shot at Superman in the crowd.

Jimmy and Lois watch in horror as Superman pushes his chest up to the gun barrel and asks him again to stand down. The hostage turns to his captor and points out Superman is someone you can trust at his word. The gunman, wavering, hands his weapon over to Superman and thanks him for preventing a potentially horrific mistake.

Seconds later Superman and Jimmy duck into a dark alley and Jimmy berates his friend for what he did without superpowers. Superman points out he had no other choice than to take action. Superman sees the paparazzi begin to swarm over the scene and wonders how Batman sneaks away like he does. Jimmy tugs on Superman's cape and points out that Clark should look at his feet. Superman is powered up again, hovering and Jimmy is ecstatic to be treated to a hotdog and soda atop the Daily Planet. Now on the flip side Clark tells him about his experience re-powered, as he describes things like hearing and taste. Jimmy interrupts with a burning question - What was it like to be human for a day? Clark pauses and remarks that overall, despite the different challenges, it really wasn't as different as he thought it was going to be.

The next day Clark receives the parcel from Mr. Oz. Puzzled, Clark flicks through a book with his family crest on the front, it is however - blank.

Mr. Oz watches from afar and remarks that the future is unwritten but that Clark and his friends will see soon enough what's in store...

Story - 4: Though a touching story, it really was a dull ending to Men of Tomorrow. It was brilliantly written, just a bit out of place as an ending. In the grand scheme though it has gone a long way to bringing Clark Kent to life. Since the New 52 began in 2011, Clark Kent hasn't really existed until the Greg Pak Smallville stories. The characterizations and relationships were spot on if only a bit vague from Perry and Steve. I like that Jimmy has been given a meatier role and is drawn into the mix more, especially as Lois has been essentially written out of the series as 'living scenery'. The mere fact that the Planeteers are getting back into Superman stories is a joy to see. I am still dubious as to how the solar flare will be used in the future but if we get more 'heart' stories than 'villain of the week' then this is really a turning point.

Art - 3: The art is vague, weak and faltering. I guess unless there is an Ed McGuinness style story, the artwork is a bit lost, it's a shame as it was a real opportunity to tackle the core cast of Superman and they look, well... odd.

Cover Art - 3: Wow, not that I'm out to torpedo the art but concept-wise it is sound, execution-wise it's a disproportioned mess. Anatomy is a basic in art school so I'm at a loss as to what went wrong here.