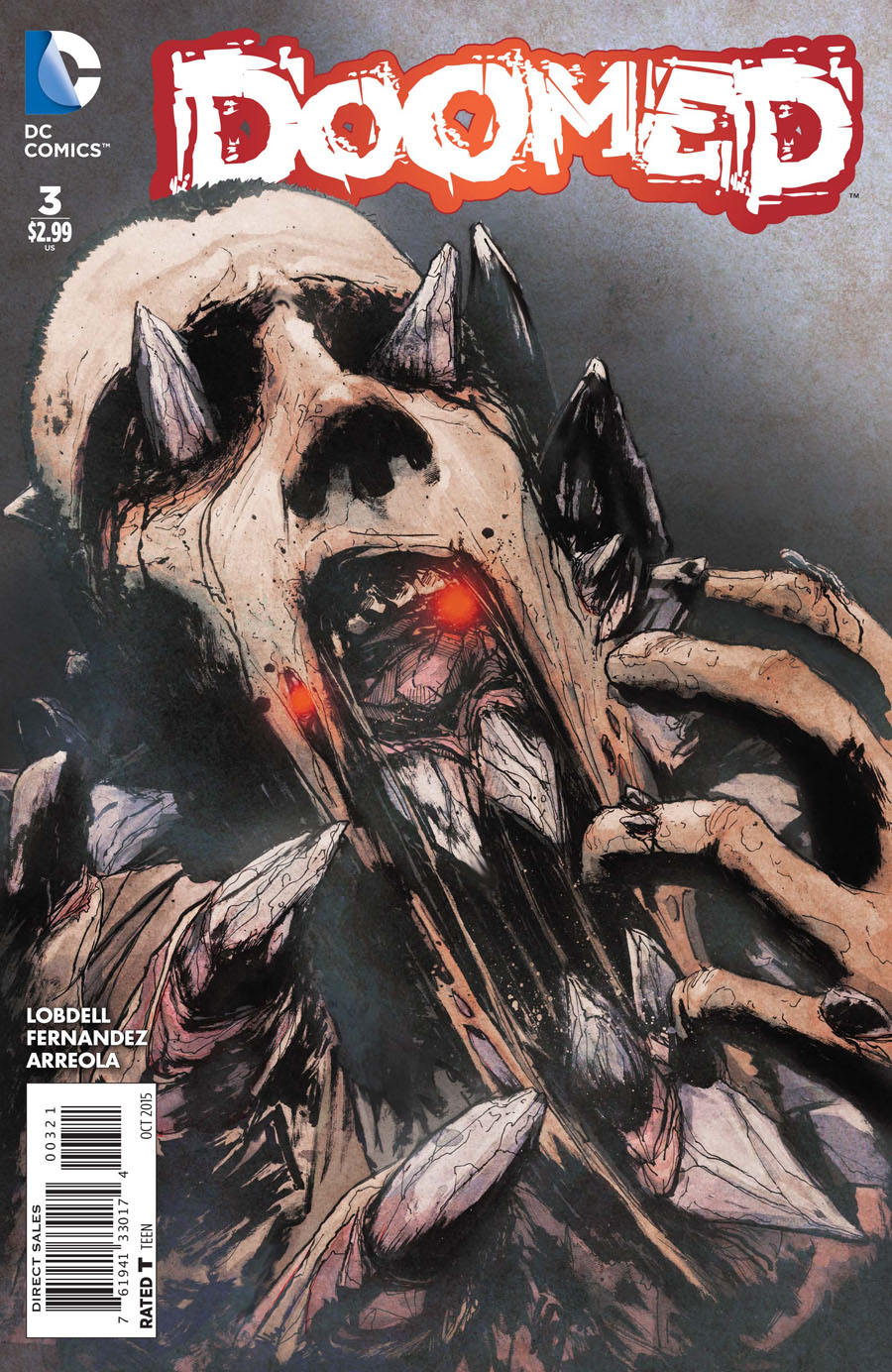 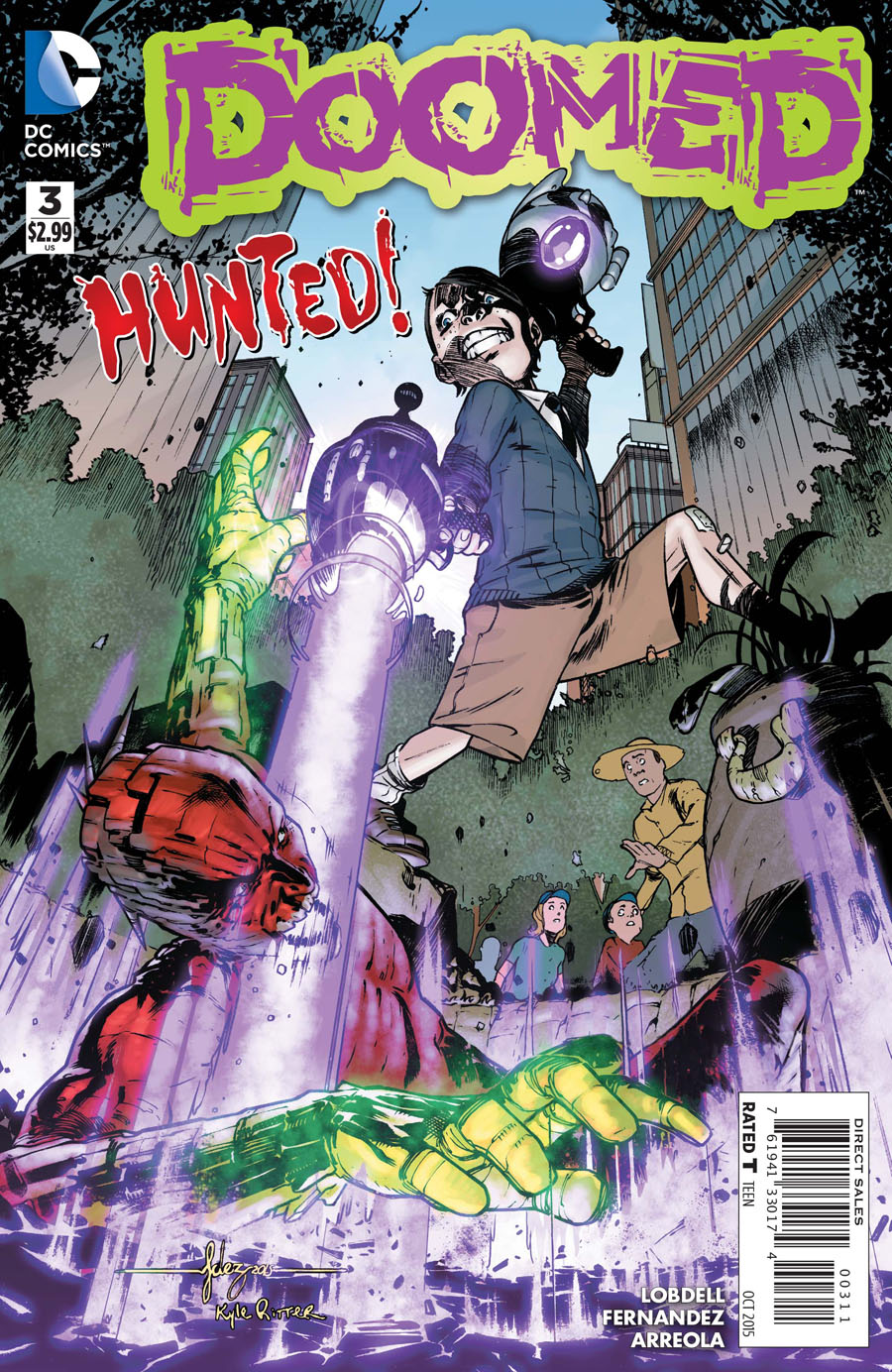 Click to enlarge
Three years ago, a young gay couple named Roman & Lexus are visiting the 'Objects of the Unknown' exhibit at the Metropolis Museum of History when terrorists attack it.

Lexus is shot in the chest and Roman in the leg. The two find themselves in a storage room to recoup but Lexus succumbs to his injuries while Roman, struggling to survive, finds a roman belt and uses it as a tourniquet. The terrorists attack again but somehow by magic the belt takes over Roman's body and transforms him into Alpha Centurion, a magical Roman soldier. As the Centurion he makes short work of the terrorist attackers.

Back to today and Roman, Reiser and Oui Oui the dog are walking in the park. Both struggle, as roommates and best friends, both share a curse. Doomed & Alpha Centurion are two personas that can take over their hosts at any time. Neither of them feel they can share their secret. Oui Oui uses their distraction to run and promptly arrives at Jayne's feet. This is the first time since the accident at S.T.A.R. that the two have met. Despite Reiser protesting, Jayne refuses to approach her superiors about his accident lest their careers end.

Reiser dreams about what could have been, what should have been, before realizing Oui Oui as run away again. This time when Reiser gives chase he finds Oui Oui has ducked into a condemned area of the park with an old arched bridge. From the shadows, child assassin, Miles Chandler III appears and promptly attacks. Reiser transforms into Doomed but is shocked to discover as the stony red alter ego he is fluent in a strange language called Monstre, worse Miles can fully understand it too.

During a fight, Miles is beaten and pretends to be a frightened child to lull Reiser into compassion. The ploy works and Miles turns the tables on his foe but is taken aback and refuses to kill when he discovers Reiser is a mere mortal 'masquerading as a monster.' Miles grants him a reprieve but swears to return soon.

Elsewhere, as the evening draws to a close on the rooftop of S.T.A.R. Labs, a helicopter drops off three guests. Wonder Girl, Kid Flash and Power Girl (Earth 2) it seems now that Superman has stopped consulting with S.T.A.R. over Metropolis' protection the Teen Titans are the last, best hope...

Well Doomed is almost, almost at that point.

It is amazing a book like this is in print but Superman's extended family are not - especially as Supergirl has a major TV series starting in just two months...

I feel I must apologize to Karl Kesel for enduring this issue's reinvention of his character, the Alpha Centurion. Once a roman soldier swept away from ancient Rome and trained by an alien race, preparing for an alien invasion and returned to modern day Metropolis as a fellow defender of the city. His allegiance with Lex Luthor and his wife the Contessa often put him at odds or tenuously at Superman's side in many battles. Now, however, he is a Roman centurion trapped inside a Roman belt strapped to the thigh of a boy called Roman and who can take over his body whenever he likes.

I understand they wanted a character with a similar dilemma to Reiser so he has a confidante and for parallels to be drawn, but why rip off classic Thor to do it? And... so badly. Thor got a hammer... Marcus Aurelius gets an enchanted thigh strap.

Terrorist attacking a museum and shooting only two gay teenagers? Why? Even Lexus asks this and it's brushed off, because... well who knows? I also get the Roman/Roman/Roman connection - it was hardly subtle.

OK, so there is that, a flash back three years past to introduce the story and as I said it was only really to give Roman a little bit of three dimensionality which so far has been non existent. So we join Reiser, soon after the horrific bus crash, the police confrontation, the collapse in the apartment where Reiser literally crashed into the apartment as a wheezing mess - to walking Ms. Lion (Sorry that's Spider-man & his Amazing Friends) I mean Oui Oui (Wee Wee) in the park. Literally no mention of the events, no monologue, no banter. NADA. Instead we have a dog that doesn't like Reiser much giving him the run around a park.

The interesting scene is with Jayne. It cues yet another origin flashback (every issue so far) but this time with relevancy. As Reiser is seemingly alive and healthy Jayne refuses to allow him to throw both their careers down the toilet. An understandable reaction as the internship was highly sought after. Reiser took his suit off in a highly contagious environment before decontamination. It really was HIS fault and they never reported the incident. If they did come forward their careers would be over and Reiser would likely spend his remaining days as a research subject. Jayne does agree to help Reiser though by finding out exactly what he was exposed to. This three page scene was the only plot advancement since issue one.

Oui Oui runs off, this time to monster hunter Miles.

Now cast aside the fact that Doomed/Doomsday/SuperDoom/Reiser and Miles all speak the language monstre (I'm not lying) Miles decides to take down Doomed.

Miles has always fought Monsters disguised as humans and thus has always taken the offensive against them. When Reiser is bested in battle Miles realizes that Reiser is the one 'disguised' as a monster involuntarily and gives him a pass till their next encounter.

Then to flog a dead horse the Teen Titans (only three of their number) are summoned to Metropolis as the only ones capable of standing in for 'Super' Superman.

Really? None of the Justice League were available? I get that Teen Titans is under Lobdell's writing but let's be real here, there is no way, Wonder Girl, Kid Flash or Power Girl are in any way in Superman's league - ever.

Make this digital only. Sever the tenuous ties to Superman. Better still, drop the book - it isn't working. Give Oui Oui a book.

Art - 2: Nothing I haven't said before, but the book can't seem to decide if it's serious, comedy, action or slapstick and the art bounces around trying to match up with the script.

When the script doesn't work neither does the art. If this was a title in the spirit of Bizarro, Black Canary, Batgirl or Gotham Academy where storytelling and, stylistically it is in its own little bubble, then this could work - as it is the book skates thinly around the DCU so far but, as I said, because the book can't figure out where it sits the art is just floundering rather than flourishing.

Cover Art - 2: I don't care for this cover. It doesn't happen in the book, which is a personal pet peeve I guess, but I don't care for the character yet either. It says a lot that Miles is the far more interesting character. Doomed just isn't packing a punch and on the cover of his own book that speaks volumes.

Variant Cover - 2: A creepy cover. Were this a creepy storyline or a horror book I'd be sold. Instead we have a book where Oui Oui the dog did more character interaction than the lead.

With that as a factor this cover just doesn't fit with the book.