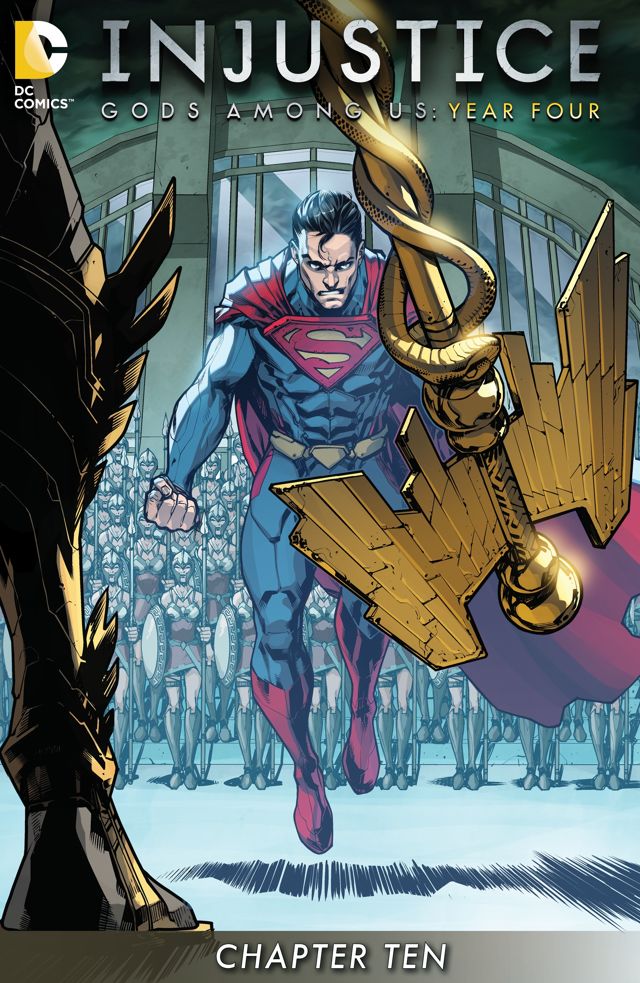 Click to enlarge
Wonder Woman lies knocked out after Sinestro takes matters into his own hands, and stops her from finishing Regime Superman. Regime knocks Sinestro away, but the trial by combat has been nugatory through Sinestro's involvement. Zeus orders Hermes to attack, while he spirits off with Hera, and melee ensues. The Justice League is getting the worst of it, when Regime stops the battle with a blast of super-breath. He states he will not allow the battle to continue, but more Olympians show up and demand that he surrender of face mortal consequences.

Story - 1: There's a flashback in the story... actually, there's a flashback in every Injustice story this year, that details what Regime was like previously. He wore a proper outfit, and trusted his teammates. In a sparring match with Diana, Superman doesn't take it seriously, so Batman takes him to task, positing that if Superman were to battle her, she would defeat him. That piece of analepsis is lost in the miasmatic film of what Year Four has turned into. There is nothing occurring of value, and more than half of this Year has been spent on a fight that refuses to happen, because of other fights. There is no movement to speak of, and it makes the flashback more ridiculous under a discerning eye. It's supposed to be a piece of character development for Regime Superman, but it's never expounded on, and is just thrown by the wayside with the slum of other needless and pointless flashbacks that have been given to readers for consumption.

I'm all for a comic battle, and frequent the battle boards like any avid player. However, to see Wonder Woman unconscious from Sinestro's blast, after having taken a full on punch and heat vision from Regime, is malpractice. To then see Regime stop the battle with a blast of breath, raises the question, "Hey, why didn't you do that with Wonder Woman?" Indeed, why has Regime Superman, been himself? He's been anything but the figure that he's advertised to be. There's no reason for this drastic change... oh, yes, we've still got 26 issues to go in a story that was over quite some time ago.

Art - 3: The outfits the Olympians are wearing are horrible. They look like bondage rejects from 70s swinger clubs.

Cover Art - 3: Would anyone know that Regime is facing Hermes, particularly with the Amazon army behind him, as if he was leading them? Not a good choice of position.