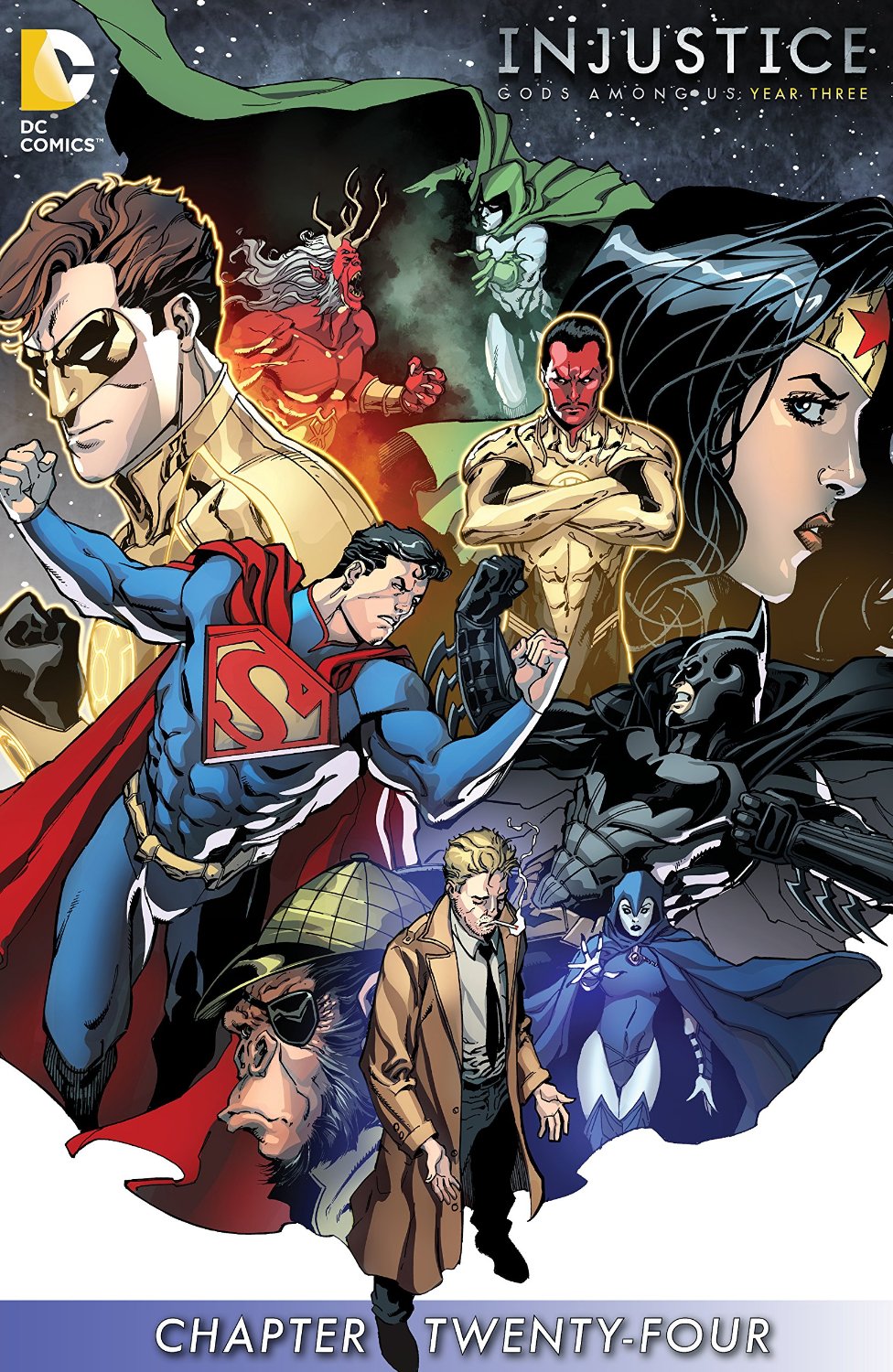 Click to enlarge
The magic of Nabu, through Doctor Fate, and the Power of Shazam, combine to send Trigon and Mxyzptlk to the Void. The Insurgency retreats to a bunker, shielded by lead mines. The League returns to the Hall of Justice. Regime Superman acknowledges that going forward, he cannot allow the battle with the Insurgency to become personal, nor can they lose sight of what the League is fighting for: a world with no Jokers or the destruction he caused. Batman inquires after Constantine, and finally learns that Constantine's involvement was solely to suit his own needs. Constantine disappears with his daughter, Rose, leaving Batman alone to ponder his next step in his struggle against Regime Superman and the League. So ends Year Three, of Injustice: Gods Among Us.

Story - 2: T. A. EWART: Hello, and welcome to the Injustice year end round-up, where myself and invited guests have a look at the year past and comment on it. Please welcome, Toina, Poddy, and Roddrick. Say hi, lads.

PODDY: Good to be here!

T. A. EWART: Hmm, well, getting hot pretty quick here! Look, I don't hate the series, but Injustice doesn't offer much for me to like. I mean, do you lot think the book makes sense?

TOINA: It's a five year story. You have to give it a chance.

T. A. EWART: You're going to give it five years?

RODDRICK: That's not what he meant.

TOINA: Injustice is Superman like we've never seen him before. It's an exploration of what happens to him when he loses Lois and his child. I don't know why you can't see that.

T. A. EWART: Granted, but do you really think this is how Superman would act? He's been in situations like this before, and he didn't turn into a despot.

RODDRICK: See, I told you this was a waste of time.

TOINA: When Lois dies he's alone and has no one.

T. A. EWART: What about his parents? They're still alive.

T. A. EWART: All right, let's just focus on this year. A question I have is why doesn't Regime Superman just kill Batman and be done with it?

TOINA: He still considers Batman a friend, deep, deep, down inside.

T. A. EWART: Although Batman tried to kill him?

RODDRICK: It wouldn't matter, he can't kill Batman while he has the super-pill.

T. A. EWART: Wonder Woman killed Huntress and she was on the pill. Snapped her neck just like Man of Steel.

T. A. EWART: OK, OK, my fault. Sorry. But hey, getting back, why doesn't Regime just put some heat vision between Batman's eyes and end this? He says that he's willing to do whatever it takes. Is that him speaking, or exegesis?

RODDRICK: You just don't get it.

T. A. EWART: Hey, I agree, that's why I asked you lot here, to get a different perspective. I'll admit that I could be missing something, so clue me in.

TOINA: You have to let go of Christopher Reeve.

RODDRICK: The Reeve days are over. Superman: The Movie hasn't aged well, and it's time to move on.

T. A. EWART: Poddy, you've been quiet, what do you think.

PODDY: You've either with us or against us.

RODDRICK: We didn't come here to make nice, we just wanted to have you in arms reach.

TOINA: Up close and personal.

T. A. EWART: Sweet Grace! You can't be serious.

RODDRICK: Are you kidding? When you sent out that invite, we had to have a contest to see who would get to come here and mete out justice.

TOINA: Yeah, and this is ours.

(Poddy and the rest raise their weapons high, when suddenly they each drop them, holding their hands in obvious pain, which are shaking from searing cold. A man flies onto set, wearing a blue union suit, bright red boots, trunks, cape, with an S shield affixed squarely to his chest)

SUPERMAN: Hey guys, why don't we all just settle down, OK?

TOINA: What are you doing here?

SUPERMAN: I'm usually pretty busy, but T. A. writes a pretty convincing letter. A clever one, too. He used Dragon.

SUPERMAN: I can see across the spectrum, and my hearing is pretty good as well. But I'm just here to quell some things I've been seeing and reading. Guys, fictional characters can be interpreted a number of ways, and not all of them are favorable to every reader. It's nothing to fight about.

T. A. EWART: So you agree with Injustice?

PODDY: But you have before! In the comics, in the films!

SUPERMAN: I know, and if you honestly think that's what I'm about, I can't stop you. I'm about helping people and I'll never give up on that. Not some people, but everyone.

T. A. EWART: I keep hearing that the world has changed and it's darker. That sentiment doesn't apply to today, does it?

SUPERMAN: I was around during a Great Depression and the worst war the world has ever known. I wouldn't consider that time full of light, but it was full of hope. People believed things would get better. I don't believe that's changed.

SUPERMAN: You, my friend, have just forgotten what it means to fly. Care to remember?

PODDY: I can't believe this! No way I'm missing out!

(Superman begins to fly off with the lot, but pauses)

(Superman smiles and takes off with lot, who all hoots and hollers)

T. A. EWART: Well, that's it for this year. We'll be back when Year Four starts up, and we hope you will too. Until then.

Art - 4: Perhaps because nothing dynamic was called for, the illustrations are that much better this issue.