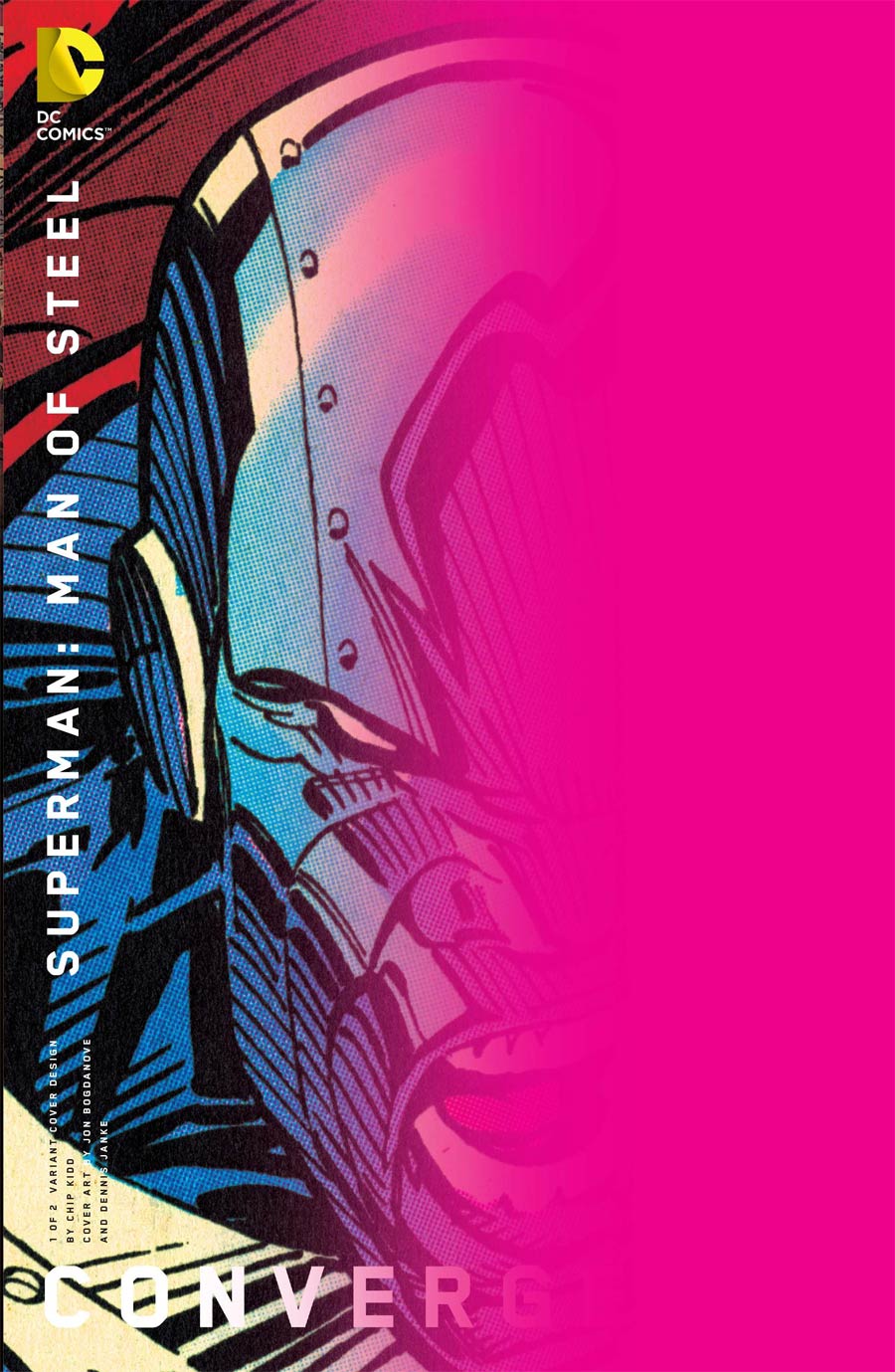 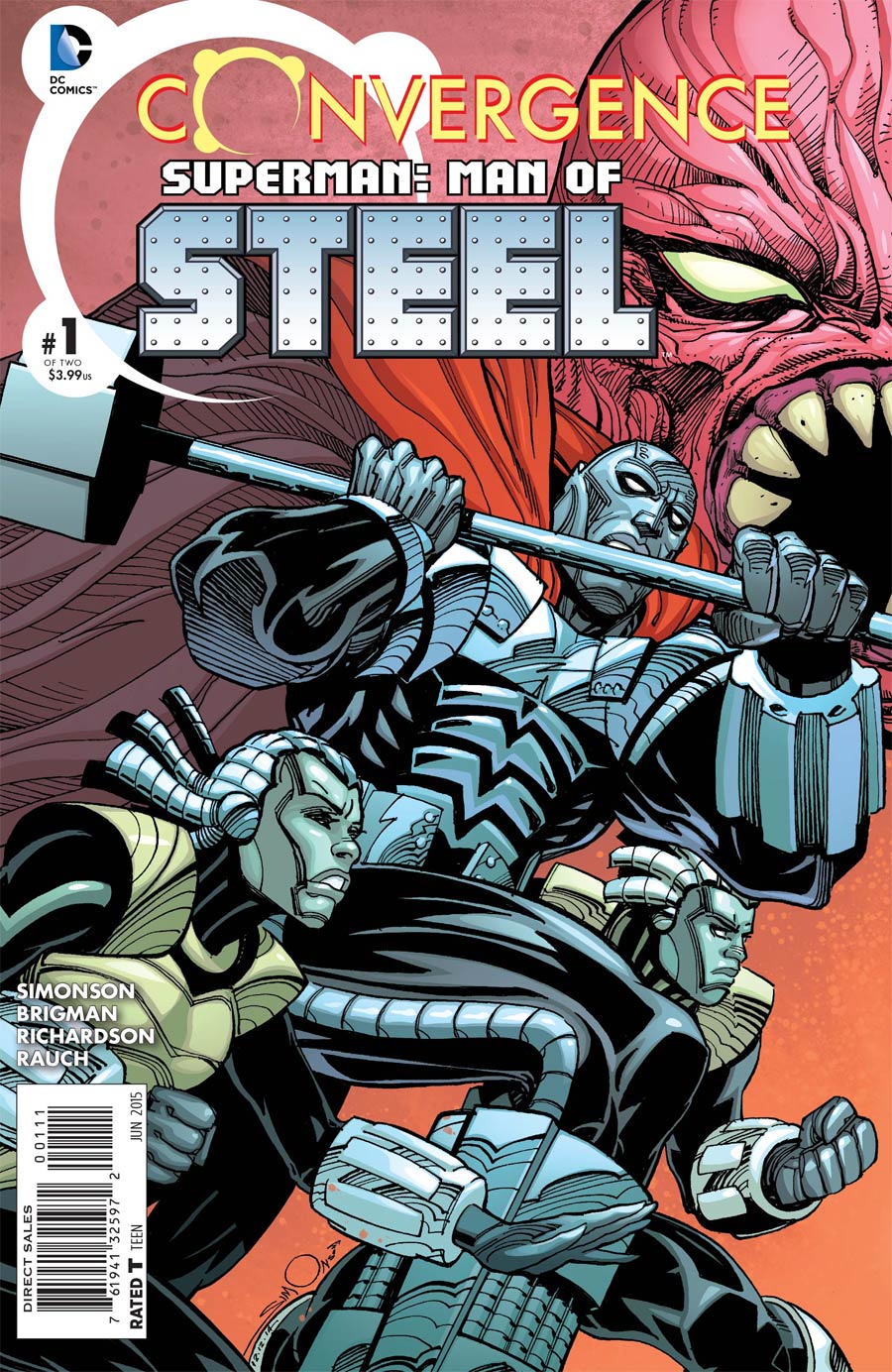 Convergence: Superman - The Man of Steel #1

Click to enlarge
This Convergence tale begins with John Henry Irons aka Steel returning to Dr. Emil Hamilton's lab to his niece and nephew Natasha and Jemahl. After a year under the dome in Pre-Zero Hour Metropolis (when Superman was away), Steel has been using his armor to keep the city safe. As Hamilton and Steel discuss the dome, ex-LexCorp Renegades begin tearing into each other for control of Suicide Slum. Steel goes to end the conflict, which ends up tearing into Bibbo's Ace of Clubs. Natasha and Jemahl suit-up in their own custom suits of armor to go help. But just as they save Bibbo, Telos makes his announcement that in order for one world to survive, all others must perish.

As this announcement ends, those with superpowers regain their metahuman abilities, and the Parasite, who had just been defeated by Natasha and Jemahl, begins to suck away Jem's life-force. As she brings him to their Uncle Steel, he tells her to take Jem to Hamilton and that he would take care of Parasite. Just then, the Gen13 kids from San Diego show up and immediately begin to attack Steel. Natasha sees that they have cornered her uncle and she rushes in to help, causing Steel to sacrifice himself to save her. As the Parasite joins the fight, Natasha finds out that Steel's armor is destroyed and his back is broken. Metropolis is doomed.

Story - 4: The thing with all of these Convergence tie-ins is that they really have to follow the rules of each continuity that they are pulled from, good or bad. Wally West's return in the Speed Force issue had to follow what happened to him after The Flash: Rebirth (which it didn't do a great job at but I'm not complaining because the real Wally West is back, even if for a limited time only) just as Convergence #2's meeting between Thomas Wayne of Earth-2 and Bruce Wayne of Pre-Flashpoint had to follow what was happening in the Batman titles with Batman Incorporated up until the time of the New 52. This is something I both like and dislike depending on the issue, but here I thought it was done really well.

When reading this story, I really felt like I was reading a 90s Steel comic book that tied into whatever was going on in the Superman books at that time, and I think that's largely due to Louise Simonson's writing here. Seeing as how she was one of the premiere team of Superman writers during that era in which Superman died, Steel was introduced, and so-on, she (like Dan Jurgens writing Convergence: Superman) was the perfect choice to write this issue.

I really liked to see Hamilton in his pre-villain days (also pre-robotic arm) again as it just reminded me of simpler times both in comics and in life. Seeing Natasha and Jemahl was good too, especially since we see Natasha with John Henry a lot in most Superman books in which Steel appears and not Jemahl. Jem was a good addition. Also, what is up with that cat? I'm sure it'll pay off next issue.

That being said, this is honestly bothering me a bit, why does everyone call Natasha "Nate" for short? I remember in books like JLA, Steel, Superman, etc. seeing Natasha being called "Nat", but never "Nate"... Does anyone else remember her being called this or have I just not read a 90s comic in a while?

Now, I don't know literally anything about Gen13, not in the slightest, but I thought it was interesting how they immediately went for the attack as opposed to Steel's reaction in self-defense. This is a lot like how Superman reacted in his Convergence title.

Overall, I really liked this issue, I thought it was very well written and well done and it was nice for me to see Steel in his 90s attire once again. Well done team!

Art - 4: Solid artwork here, reminds me a lot of this era of DC Comics. Love it!

Cover Art - 3: Not fantastic, not terrible. It's cool looking.

Variant Cover Art - 2: I'm not a fan of these Convergence variant covers... They seem very bland to me.