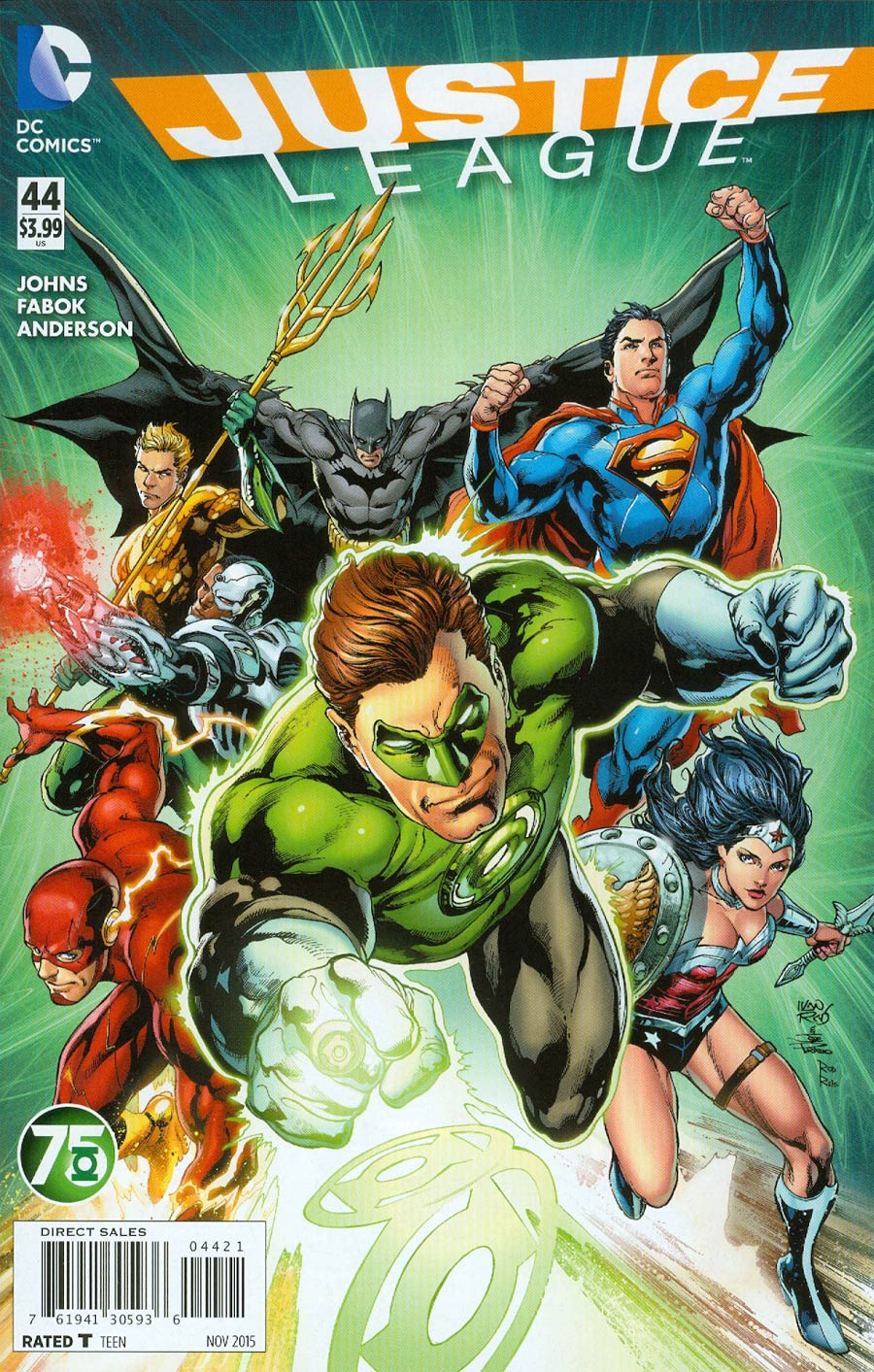 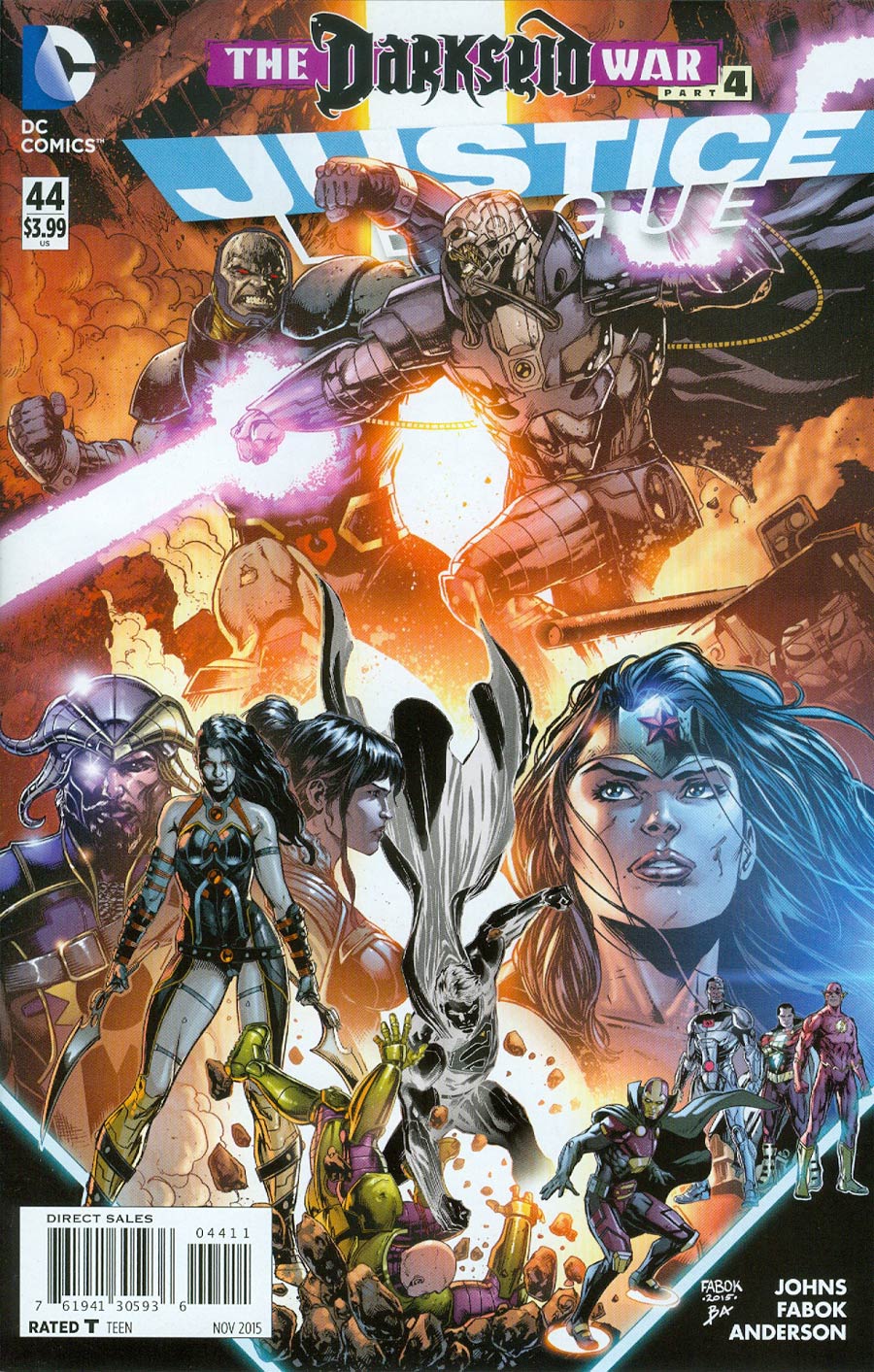 Click to enlarge
Batman and Green Lantern journey to the planet, Qward, the provenance of the Anti-Monitor, in hopes to find his origins and put a stop to him. On Apokolips, Lex Luthor's gambit that Superman would be recharged by the fire-pits, results in a different Superman, both in characteristics and cosmetics. Luthor isn't given time to ponder to this, as the corrupted Superman attacks him. The fight between the Anti-Monitor and Darkseid continues, until the Anti-Monitor corrupts the Flash and changes him into the Black Racer. The combined power of both the Black Racer and the Anti-Monitor are able to lay waste to Darkseid.

Story - 3: Et Tu, Johns? Fabok's pretty pictures cannot hide the redundant nature of this installment, and perhaps, the story overall. The "Darkseid War" began with succinct combustion, something much needed in DC's books right now, but has become a thrice told tale to the extent that one has to wonder why it's being told at all. The Anti-Monitor being present has all the trappings of a major event occurring, as whenever he has appeared, even as a husk, a Crisis has taken place. A war of such nature doesn't seem right for a destroyer such as the Anti-Monitor, as what need does he have to trade blows with Darkseid, when he is a being of such power? The Street Fighter aspect of the war is a mishandled attempt at action, when a higher level of dynamism is needed... and readers aren't being given it. What readers are being bestowed is the Flash as the Black Racer, again. Superman corrupted on Apokolips, again. Batman as a know-it-all Man-God, always. It's displayed in a pretty fashion but still hackneyed nonetheless.

The 30th anniversary of Crisis on Infinite Earths is this year, and it's been heralded by absolutely nothing. Nothing. You certainly heard of Batman Day, and no doubt have seen covers for the new Dark Knight Returns: Master Race, but COIE? More than TDKR, Watchmen, any other work of that time, Crisis is the most important, as it affected the DC Universe in totality, and not a single or handful of characters. It seems that ideas on that level are severely lacking or altogether absent from the minds governing DC's direction these days. Not another reboot, no, but an idea that is big and encompasses the DC Universe at large. The closest we've had was Grant Morrison's The Multiversity, but even that was ensconced away so as not to have to deal with the edicts of the New 52. About the edges of the New 52 debacle, there is this feeling that something is waiting to happen, but much like the "Darkseid War", it's been put on hold... or like MOS 2, permanent hold. Surely there are better uses for Darkseid than to kill him once more, and better stories for the Justice League than to watch them become vitiated New Gods, but if a writer of Johns' calibre can phone in this blancmange to no apparent rhyme or reason, perhaps the feeling that I sense is merely indigestion.

Art - 4: What an artist like Fabok could accomplish, with a story that had some ambition.