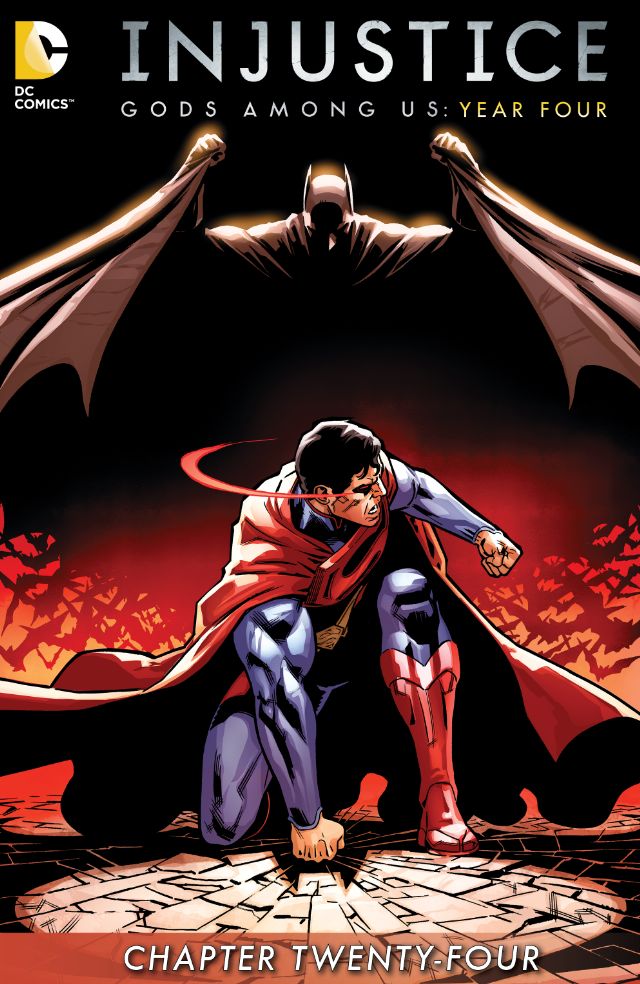 Click to enlarge
Zeus releases his claim over the Earth, after a conversation with Highfather. Highfather also has Zeus restore the power of Shazam to Billy Batson, then leaves with the Insurgency under his safety. Regime Superman delivers Ares, god of war, to Darkseid, on the condition that Darkseid never venture to the Earth again. Regime visits the world's leaders, and threatens them should they cross him again. Batman discusses his tenuous situation with Lex Luthor and the need for new recruits, when Lex is called away by an alarm that alerts him to the fact that the encapsulated body under his science, is no longer there.

Story - 1: Welcome to the Injustice: Gods Among Us - Year Four round up! To close off this year, we have special guests, Darkseid, Zeus, and the wizard, Shazam! Thanks for being here, lads!

WIZARD: Greetings. Why am I here?

T. A. EWART: Now, it's pretty clear this year sucked, but since there was the theme of gods this time, I thought I'd get you lot to answer some question. Wizard, Shazam, how did Zeus strip Billy of his powers? I thought only you could do that?

WIZARD: That is true, but again, what am I doing here?

T. A. EWART: Yeah, since you're the conduit between him and the gods and heroes that power him, I thought you'd make an appearance.

WIZARD: Wait, is this Injustice: Gods Among Us?

WIZARD: That wretched universe that showcases a corrupted version of my champion?!

T. A. EWART: Well, yes. Since you're the only member of the Quintessence that hasn't appeared, I thought-

WIZARD: How you managed this, I do not know, but be warned, I am not a wizard to be trifled with.

(Shazam stands, raises his arms, and disappears in a lightning strike)

T. A. EWART: Not quite what I had in mind. Darkseid, Zeus, both of you were duped by Ares, which should have never happened. Zeus, you possess oracular abilities, and even have the ability to influence the Moirai; how did Ares get the drop on you?

ZEUS: I need not answer to you.

T. A. EWART: Well, what about Heracles? How did Regime Superman kill him, when we know that gods cannot be killed? Even in the war with the Titans, they were consigned to Tarturus. Uranus and Chronos are still around, even if a little worse for the wear. How did Heracles buy it, when Ares can't be killed?

ZEUS: I am the All-Father!

T. A. EWART: Actually, that's Odin. You're the Sky Father, Cloud Gatherer, or the Thunder God... sorry, Thor. Hey, at least you didn't call yourself the Lightning Thief, eh?

ZEUS: Had I not been forced to forswear the Earth, you would know my judgement, mortal.

(Zeus summons a thunderclap and vanishes in its wake)

T. A. EWART: Well, I guess that just leaves-

(Darkseid snatches T. A. by the throat)

T. A. EWART: Not even one question first?!

DARKSEID: I will peel the equation from your ill-mannered flesh.

T. A. EWART: I guess it's time for our surprise guest! Any time now!

(A crackle of electricity permeates the air, followed by a thunderclap once a word is spoken)

DARKSEID: You? None but the Kryptonian can challenge me!

(Darkseid is whisked away, and T. A. Is returned to his seat)

T. A. EWART: Hey! Captain Marvel! The real one!

CAPTAIN MARVEL: Thanks for the invite, though inviting Darkseid wasn't the wisest thing to do.

CAPTAIN MARVEL: I took him back to Apokolips and changed him into a hellhound. It'll last until I say the word.

T. A. EWART: That's right! You can transverse dimensions, and do transmutation!

T. A. EWART: Why don't you perform such acts regularly?

CAPTAIN MARVEL: Well, there was this lawsuit....

CAPTAIN MARVEL: I'm not sore, mind you. Besides, Superman has had more suits than I can count.

T. A. EWART: True. Facts. Wait, so how did Regime Superman get to Apokolips, when he doesn't have the ability to traverse dimensions?

CAPTAIN MARVEL: I know, that doesn't make sense... but neither does Injustice.

T. A. EWART: Well, I'm out of time. We'll be back when Year Five starts, and yes, it will start. We hope to see you here.

Art - 3: There are two panels that stand-out in this issue: Superman's scowl of anger after Batman stands him up, and the smoldering ruin of the last nuclear weapons. It that sort of imagery carried throughout the issue and the series, it would be better off.

Cover Art - 4: It would be a 5 if he actually turned around and killed him finally.