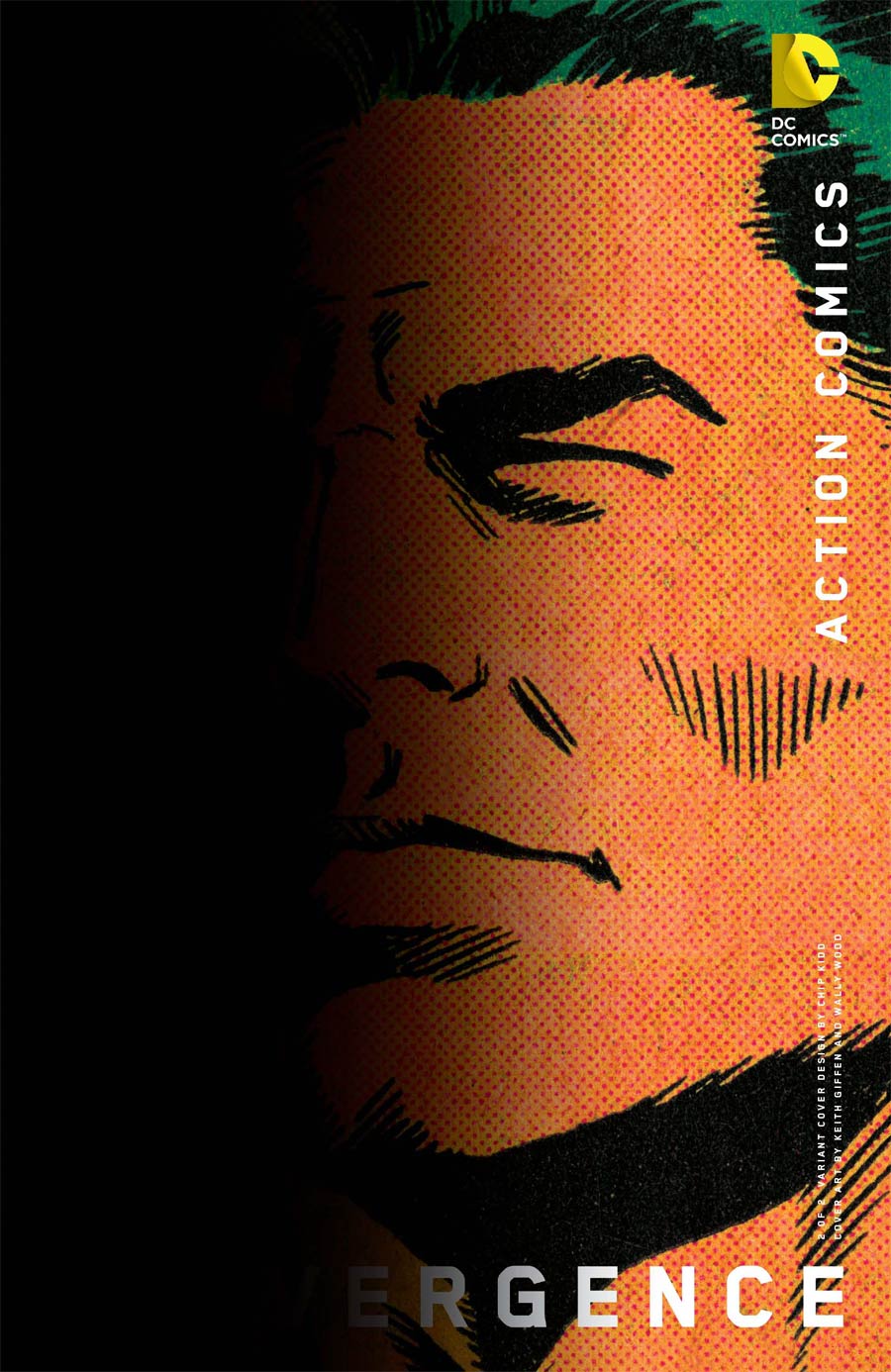 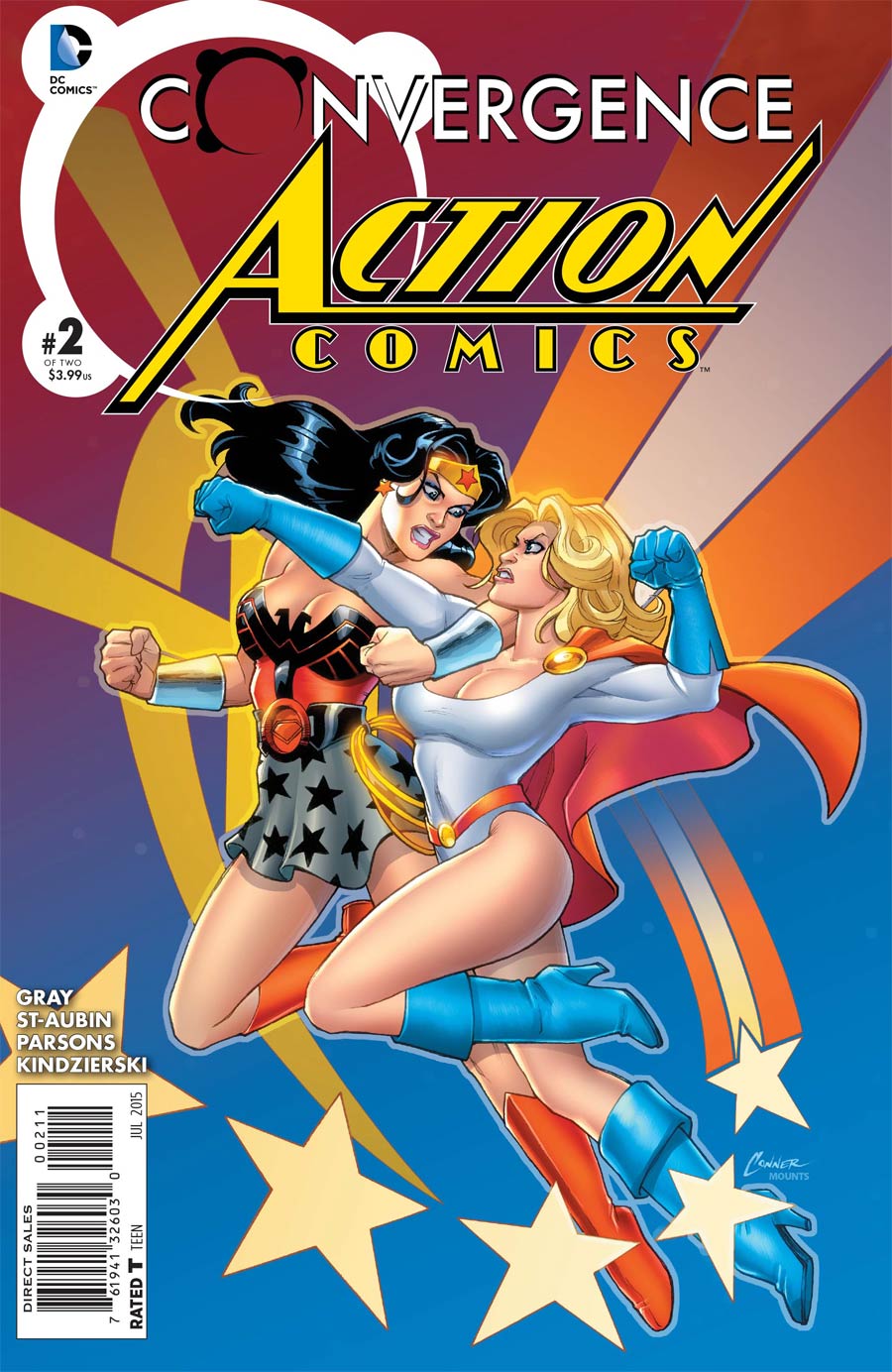 Click to enlarge
Power Girl says good-bye to Andrew and flies off to get answers for everything that has happened to her and her city for the past year. The Wonder Woman of another Earth attacks her and the two fight. Meanwhile Lex Luthor stages a coup against Josef Stalin in an attempt to safeguard his wife. The Superman from Power Girl's Earth arrives and breaks up the fight and convinces them that they are being used. Together they confront Lex and end his coup. Superman and Power Girl return to their city and check in with Lois and Andrew before flying off to deal with whatever is ultimately threatening them and the other cities that are out there.

Story - 4: While this issue was one, long fight scene I think that Gray managed to put enough character into the story to make that fight scene mean something. It was an interesting choice having the fight go down between Wonder Woman and Power Girl instead of Superman vs. Superman and I ended up liking that despite being a wee bit disappointed that I didn't get to see the two Supermen throw down. Again this goes to Gray's ability to make the dynamic between Wonder Woman and Power Girl compelling enough to make me overcome my expectations.

Gray's motivations for Luthor were great as well. I don't think it jibes with how he was in RED SON but it gave the story another emotional hook. The fact that he staged his coup not to increase his personal power base but to save his wife really spoke to me. In fact all of the relationships in this story spoke to me, especially the brief scenes between Power Girl and Andrew and that even briefer glimpse of Superman and Lois. Part of me wants to make a bigger deal out of the fact that Gray ignored huge chunks of the characterizations from RED SON but it in the end it really doesn't matter. This was not an attempt to further those characters. It was a chance to take them out and put them in different situations. So I am putting aside my normal annoyance at a writer changing an established character's motivations for the sake of the story he wanted to tell.

Overall I liked both issues of this series quite a bit though I do so from an emotional distance. During my review of the first issue of this series I discussed how I thought that while doing this whole Convergence thing is all well and good it felt like DC was dangling a carrot in front of me only to take it away after two months. Despite the ending to Convergence I still feel that way because while (SPOILER WARNING FOR THE LAST ISSUE OF CONVERGENCE) DC has undone the original CRISIS ON INFINITE EARTHS and made it possible to tell stories from all eras I have very little faith that they will do anything about it. Between a lack of trust on my part for them to follow through on these sorts of developments and the fact that the current regime has rebooted their universe twice now I feel like they left the door open but have no intention of going back into that room anytime soon.

But what do I know? I'm a bitter comic book fan. At least I had fun with this story. That was something at least.

Art - 4: I continued to like the art with this issue. The action was intense and enjoyable and the smaller moments, like the opening page, packed a lot of emotion into the story. Lex was a bit of a problem with time out. He didn't really jibe with the Lex from RED SON and I didn't like the way St-Aubin and Parsons drew him. More than anything I appreciated that they went with the version of the Earth-2 Superman's S symbol that I liked the most.

Sometimes it's the little things.

Cover Art - 5: I have always liked Amanda Conner's take on Power Girl and this cover is a good example of why. She looks powerful and iconic. I also liked her take on the Red Son Wonder Woman. This cover has a serious old school feeling to it, which fits the nature of the story. I think DC is leaving money on the table by not making this a poster.

Variant Cover Art - 3: So that was the point of the variant covers for this event? One image with a little artsy effect to make them look different and possibly compelling?

I am not suggesting it is bad. I just don't care for it. It does nothing for me esthetically. I feel kind of cold about it actually. It is dislike but with a heaping side of apathy.