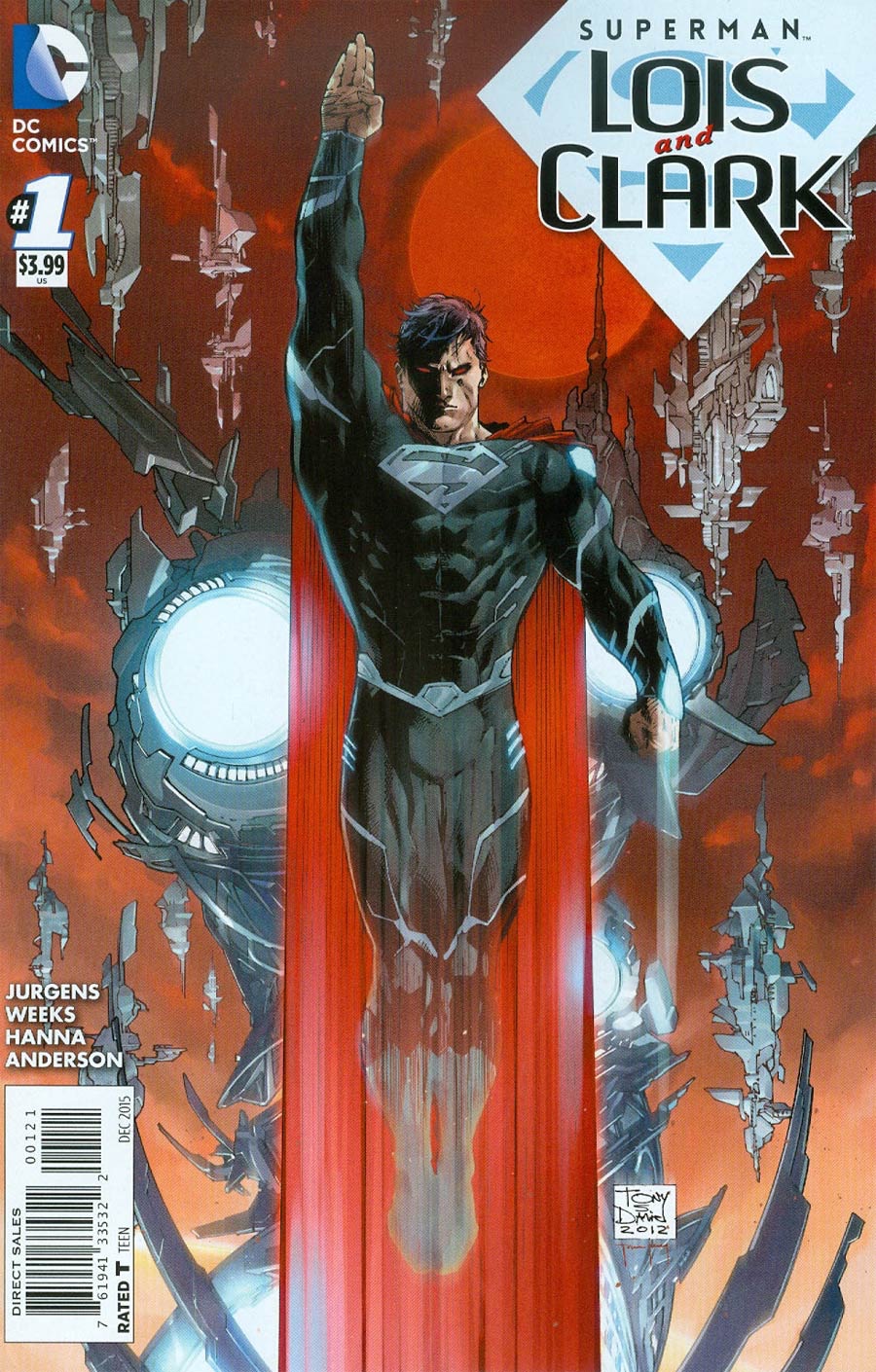 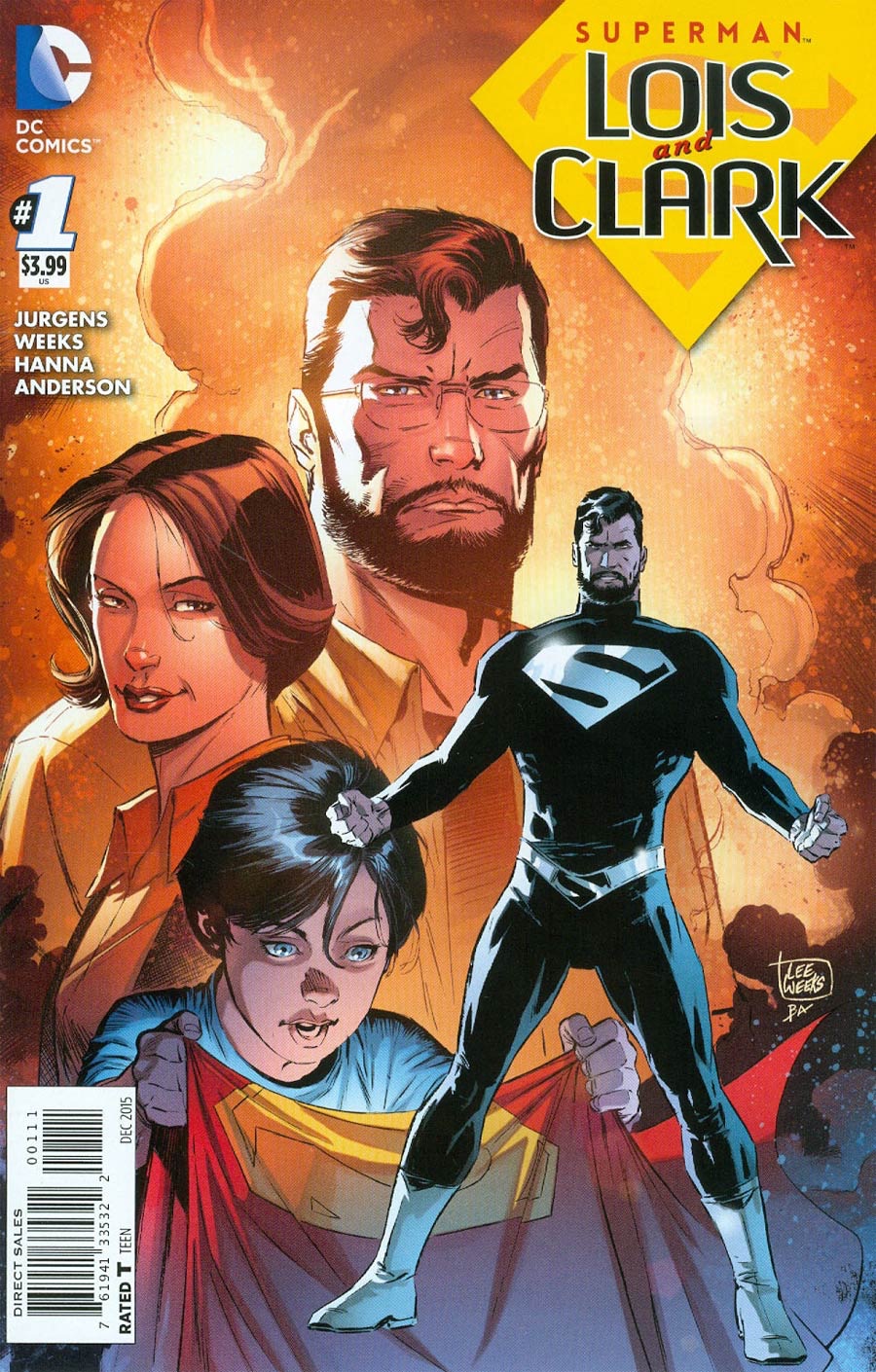 Click to enlarge
Atop a building in Metropolis, Superman watches while the Justice League battle Darkseid and his forces. He's ready to act, but resists and allows the League to defeat Darkseid on their own. Superman returns to a crude farmhouse, where Lois and his son, Jonathan Samuel White await him. Superman reasons that he and Lois need to go underground, to keep a low profile on this Earth that distrusts heroes. Nine years pass, and Superman has continued to operate in secret, but is now experiencing power-fluctuations. This is a complication, as Superman notes the date of the failed flight of the Excalibur, which turned Hank Henshaw into the Cyborg Superman. Superman resolves to be certain that it doesn't happen again. Superman saves the Excalibur, with some struggle, but finds that the only crewman onboard, is Henshaw. Meanwhile we learn that Lois is a published author, under the pseudonym, Author X. She has sought to keep her identity a secret, but a figure unseen by her, observes Lois meeting with her publisher; the result of which remains to be seen. In a distant star system, a figure referred to as "Mistress", beheads a defeated soul in search of the "Oblivion Stone"... and Jon Sam is taken to the principal's office for being a doofus.

Story - 4: The premise of this story is ludicrous. Superman, Lois Lane, and their son, on the New 52 Earth with the not-ready-for-primetime players? The Excalibur in trouble, when so many events hat happened on their earth never transpired? Going underground, but still wearing the "S" shield? Author X? A nine year old son? Worst of all, Superman watching a fight and not getting mixed up in it, when the world is at stake? It's almost too much to suspend disbelief, and on first read, it doesn't hold up. However, on second read, third and fourth read, it more than stands strong, it entertains, it provokes thought, and reminds any reader who had any doubt as to who and what Superman is all about, really all about, truly is. It's been five years without Superman. Five years readers have been given a Superman in name only. A Lois Lane stripped to a husk and made a scapegoat. Readers have been told that New 52 Superman is still getting it together, growing into the role of Earth's Greatest Hero, well, time's up. The real deal is in town and given the choice between what amounts to a poseur in denim, as compared to Superman, the selection is obvious.

Lois Lane has been regulated to the queer status of either diaphanous friend, or a villain in the New 52, for no gain whatsoever. The edict to separate the two has resulted in a quagmire that won't be easily sorted out. Here we see Lois as a wife, mother, confidant, and one has to wonder what possessed DC to make her anything less. The ease with which Jurgens writes their dialogue is complemented by the tenor and tone of their words. Superman regarding Lois as "Lo," Lois with the familiar "Smallville" tag on Clark, and we have a couple that aren't just married, but are friends, with a mutual respect that is displayed in the playful way they converse with each other. We're also reminded of Lois's puissance as a writer. What Superman can do with his abilities, she can do with a keyboard. It's a reminder that the premier power-couple use those abilities for the same goal, to help others. Doubt it? Look at the titles of Lois's published works. Here, Lois exposes corruption and dysfunction. New 52 Lois is made to expose Superman. Probably the best scene is seeing Lois channel Ma Kent, compiling a scrapbook of Superman's secret deeds. While she beams with pride, we're told the collection is for Jon, when he's older. Sure they are.

Jon is given little screen time, but Jurgens does well with him nonetheless. Jon is normal. He's been raised in the Kent fashion of values and hard work. He's likable without being "nauseatingly wholesome". Jurgens seems to understand what few writers do: children aren't lodestones to be eradicated in deals with the devil. They provide a complexity to any story, and development to any character that can rarely be achieved otherwise, so long as they are treated as 3-dimensional beings, and not stock characters for one-liners, just so the show can make it to syndication. Jon subtly shows a perception of events, noting both his father's absence, and the inconsistency in the prevarication that has been told him. The irony of him getting to trouble for watching his father save the Excalibur shows Jurgens doesn't plan on making Jon merely a punchline, but also that Superman's legacy isn't easily avoided, ubiquitous as it is.

For years I've heard tell that there is no "real" Superman, only the Superman that one prefers. I've never agreed with that notion, which, for obvious reasons, just doesn't ring true. The argument of perception will be brought in, which will be returned to preference argument, and before you know it, sophistry has its way once more. However, in this case, where we have two Superman characters on the same world, the question will arise of who is the real one? The answer is obvious: the one who sacrifices of himself for others. The one concerned with helping the people, more than his own self-interest. The one who exudes a quiet confidence, is secure in himself, and recognizes his abilities are best when shared with others. Still not sure which one it is? Here's a hint, it's not the one with the motorbike.

Art - 4: Lee Weeks draws a distinguished Superman, an intelligent Lois, and an engaging Jon, all without being overly saccharine, or cynical. The barrel-chested figure atop the building, complete with proper trunks, isn't an image that many can pull of these days, but thankfully, Lee can does. He offers robust, beefy, Superman, in addition to a motherly, but not maternal, Lois Lane. Much like the art provided in Convergence: Superman, he's in his element, and hopefully will stay just that way.

Cover Art - 4: The cover changed in terms of color and background, but the best change was having Superman look at the reader, as opposed to looking off-wards.

Cover Art - 2: An ugly and inapplicable splash of "ugh"! It was also to be used a variant for a storyline two years ago.