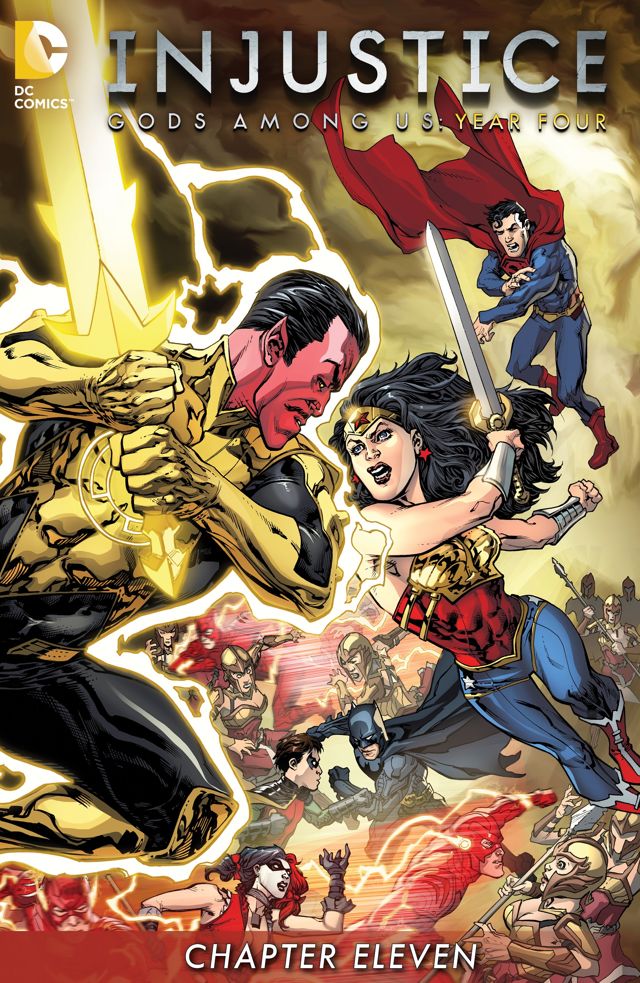 Click to enlarge
A call goes out to all active Justice League members, as those currently involved in the battle at the Hall of Justice need assistance. No one answers the call. Regime Superman is ordered to surrender, and with that, he's allowed 24 hours to comply, while Hermes pulls the Olympian and Amazonian forces back. The Batman reels at this notion, but has no choice but to acquiesce to the directives of his new allies. Wonder Woman seeks to regroup with the Justice League, but is reminded that she is with the Olympians and Zeus, now.

Story - 2: There was a battle to the death, with the option of surrender, and now the inanity continues with Hermes ordering Regime Superman to leave Earth, with the allowance of "a turn of the Earth" to do so. Is everyone in this story just brainless?! The League is on their heels. The time to crush them is now. What is the logical next step? Give them time to recover. Batman is in your sights. He's the only person in your way. What's the right move? Why, let him go, of course. This isn't even bad fan fiction. It's insulting. If you've enjoyed this series for the length of time that it's been published, this has to be the nadir on the run. The plot has become a glacier, and like a gigantic mound of ice, it's worthless. How can you charge someone honest money for this ever flowing fondue of recycled malarkey? Readers deserve better than to read week in and week out, that you, writer of this series, have no idea how to make this exhausted story entertaining any longer.

The creation of a clone by Lex Luthor, a "Bizarro," if you will, is another sign that Regime Superman was in better hands under Tom Taylor. That Luthor could even manage to create something of this nature under Regime's nose smacks of uncompromising stupidity, and that the character advancement given him has been forgotten, if not flat out ignored. Why should Regime trust anyone, and I mean anyone, when he's been shown repeatedly that the only way for his vision of a world at peace to come about, is to be certain that no one gets in his way?

Join me next time when we hit the halfway mark, with guest, Regime Superman!

Art - 2: Miller's work seems phoned in for this issue. Perhaps because there was no fighting involved?

Cover Art - 2: Aside from the primary school line work, it's a poor reflection of what transpires within, and therefore, grossly misleading.