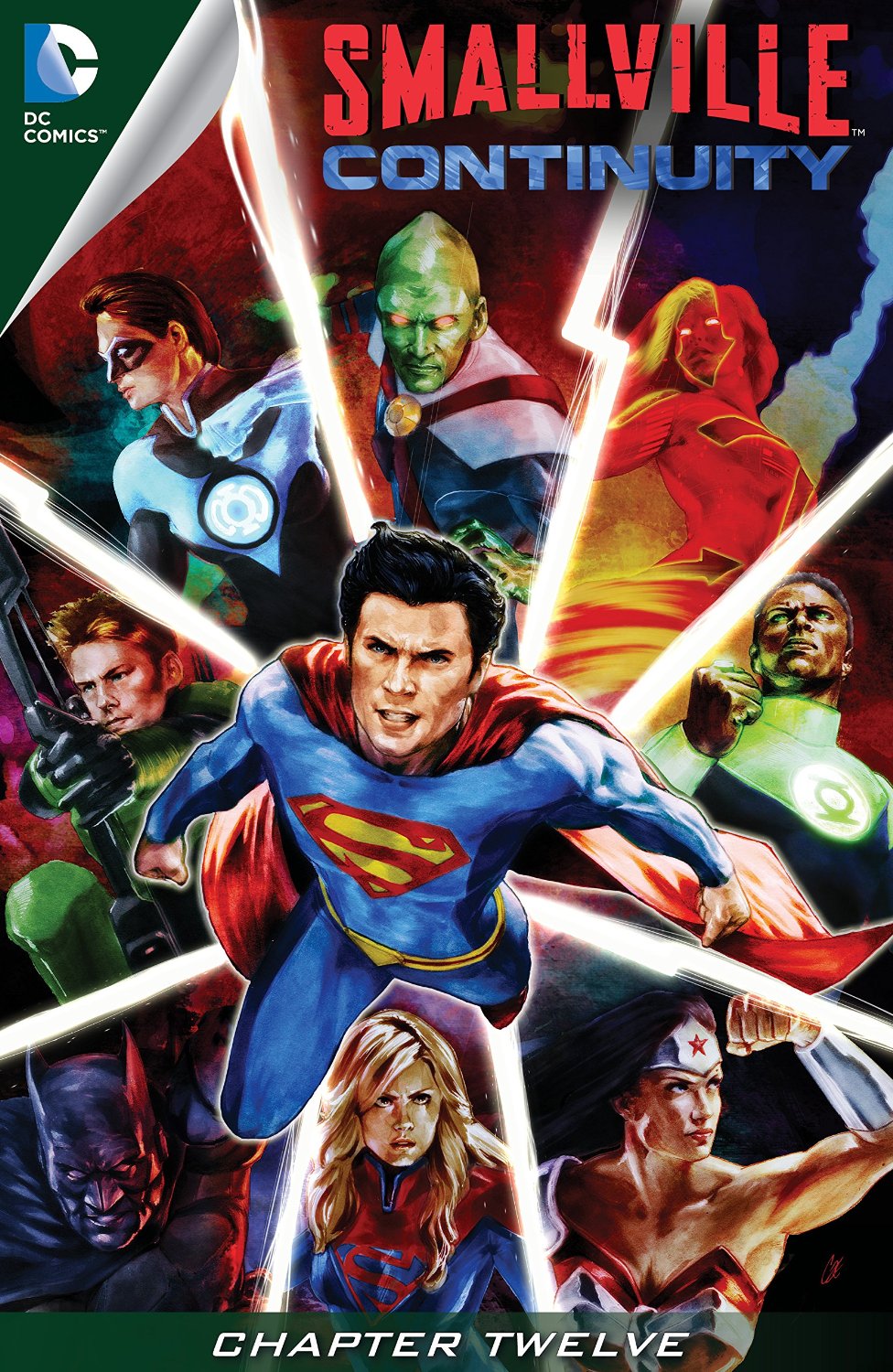 Click to enlarge
As Lois helps Clark move out of the Bullpen into his new office the two receive simultaneous text messages and race out arm in arm at superspeed. And so we arrive at hospital just after the birth of Chloe and Ollie's baby. Ollie of course gifting the young boy with a baby sized bow.

Chloe worries about the dangers in the world and the rise in heroes. Oliver reminds her they all fight for justice and will ensure their new baby will have a safe and healthy upbringing. Chloe laments that family should be here for their big occasion and Ollie smiles as he wheels her into the waiting room to be greeted by their 'family' - the world's greatest heroes!

Lois and Clark are shocked to be named God Parents and coo over the new addition. Clark remembering the losses they have suffered over the years is truly touched to meet a new life brought into the fold and even more so when they reveal the baby's name.

Later Lois and Clark sharing a bath look back at their recent achievements and look forward to a little downtime. Lois jumps out of the bath straight into a jumpsuit strapping on a parachute as Clark suits up in his costume. The two fly out into the night directly in front of a full moon embracing, soaring through the sky.

Tess radios in to 'Boy Scout' about a tsunami in India so Lois dashes landward with her parachute leaving Clark to do his thing. Tess tells Clark that he has only three minutes to stop the disaster but he has one request - no more 'Boy Scout' as a codename.

Instead this looks like a job from now and forever... for SUPERMAN!

Lois and Clark share some much needed and much missed time together as comic book history's first couple. The scene with Lois parachuting away was a skillful yet quiet hint at what Lois was before the New 52 ruined her character. I'm also glad Clark finally after so long embraced the moniker we all know and love - Superman!

Do I wish this series would continue - hell yes. Am I happy with how it has finally ended? Wholeheartedly so. The writers and artists on this Season 11 should be commended for their hard work at delivering one of the best Superman titles for years.

Art - 5: As with the last chapter there is no action to speak of but the intimate moonlit flight and kiss with Lois was fantastic as of course was the scene where Clark finally embraced his destiny as Superman.

Thank you to a team I'll miss. Smallville was a bumpy ride at times but overall it was a show and comic book series I will always remember.