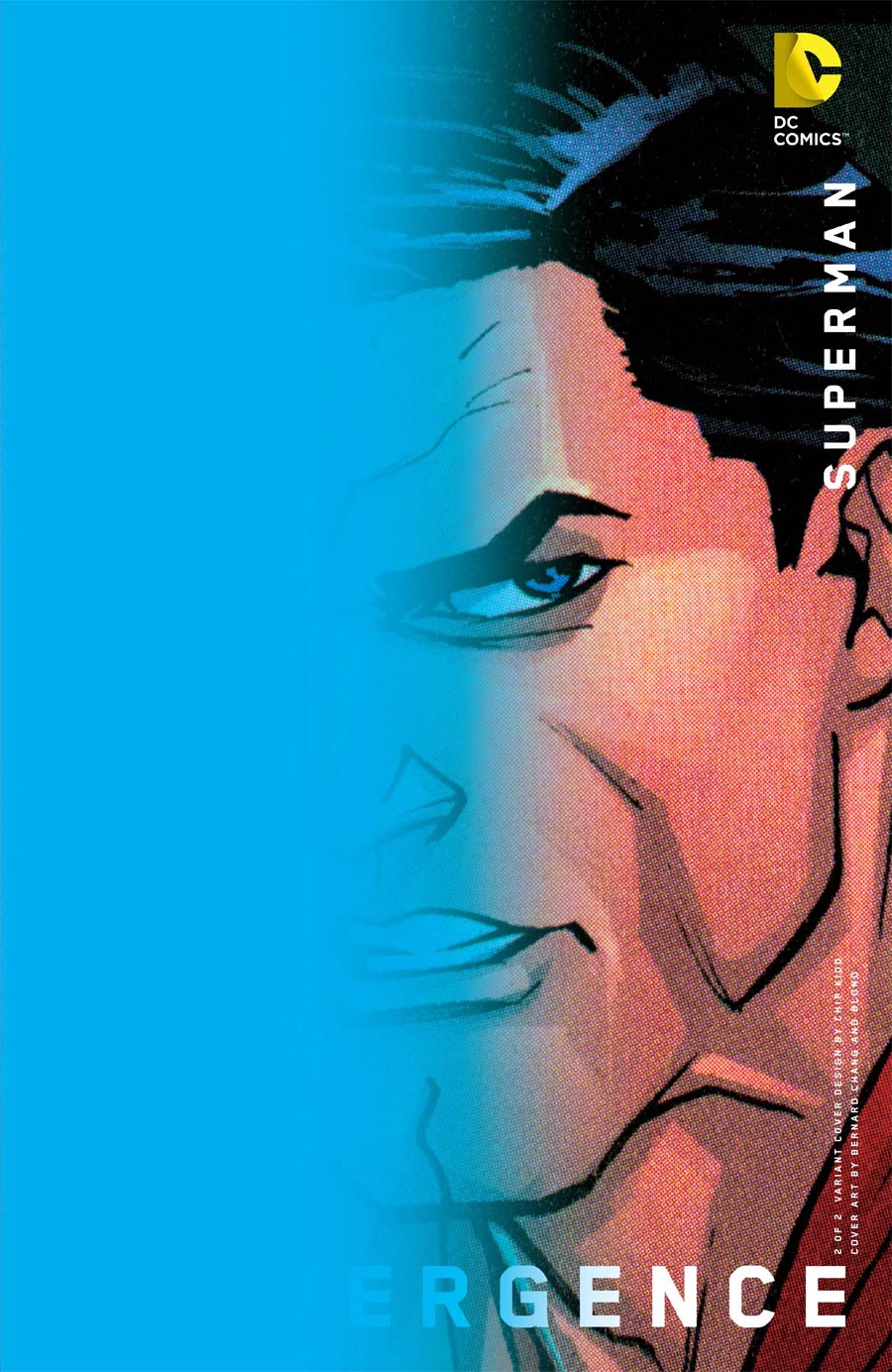 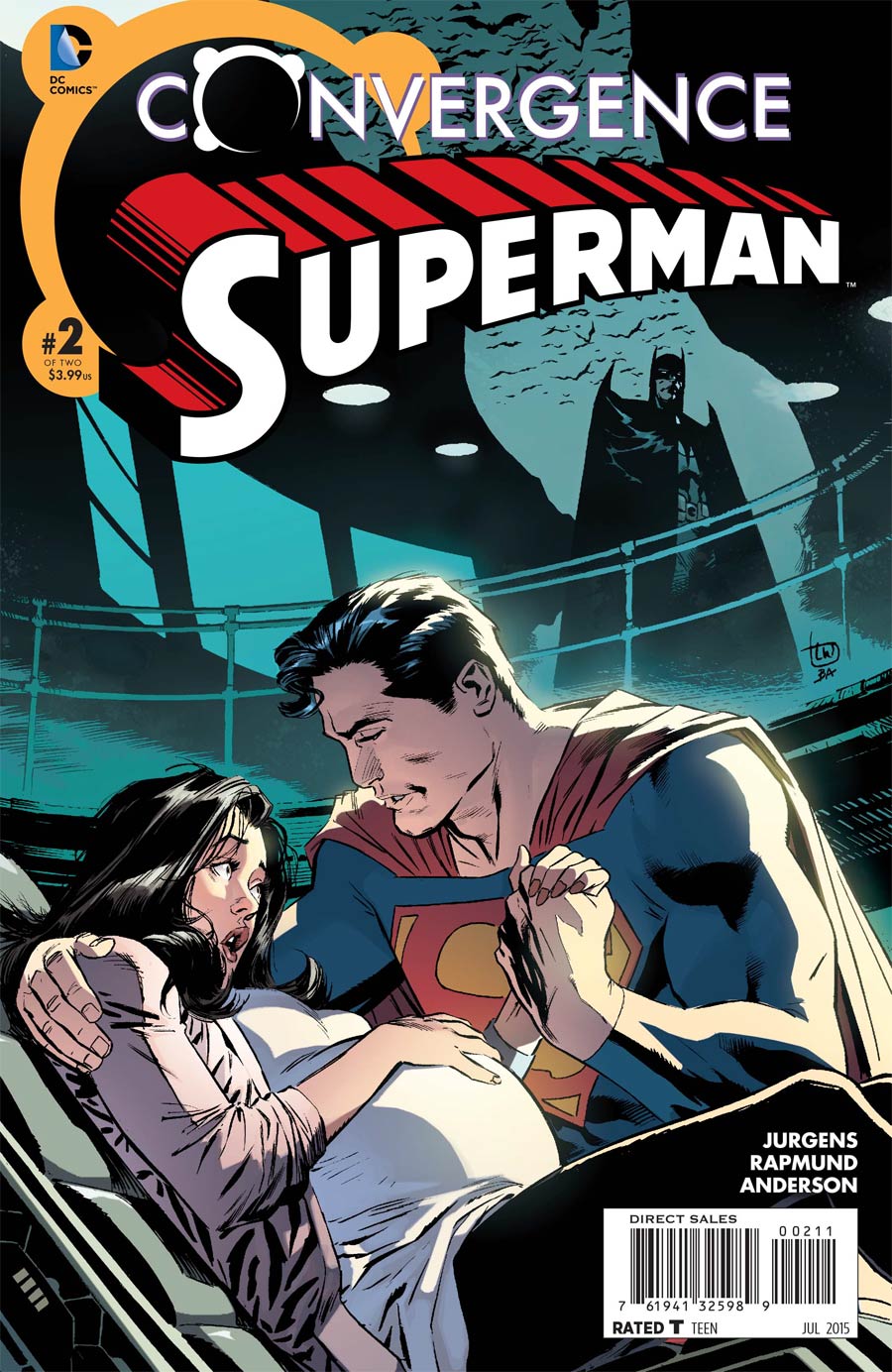 Click to enlarge
Batman (Thomas Wayne) is perplexed. He thinks back to Flashpoint and tries to find out if this Superman and his Gotham are the one that his Bruce is from, the Batcomputer however struggles to calculate the possibility. Meanwhile Superman is fighting off Captain Thunder and Cyborg while Abin Sur (Green Lantern) disables the Whiz Wagon's hover power with his ring. Superman hurls back his foes and races to save Jimmy. Superman then asks the Flashpoint heroes to join forces, work together and save both cities. The 'Flashpointers' are reluctant and fire upon Superman with all their might.

With a blast of heat vision Superman melts Cyborg's cannon arm, Green Lantern pauses but Captain Thunder soars forward and slams Clark into a wall of rock but a call for help from Lois demands his attention and Superman kicks Thunder in the face, punches him to the floor and buries his head into the dirt. With the woman he loves pregnant and in danger, Clark swears to move heaven and earth to protect his family.

Green Lantern then uses the full force of his ring against Superman. Clark comments that Lanterns are meant to be peacekeepers but Abin pours on more energy. He promises to talk only when Superman is beaten. Jimmy climbs out of the Whiz Wagon with a cannon and shoots Abin Sur in the back to buy Superman time to get to Lois. In the Batcave Batman realizes Lois Lane is alive and wonders why Superman would go to so much effort and endure so much to save her. Subject 1 penetrates the cave with a heavily pregnant Lois and demands Batman, a former doctor, help her. He reveals with his powers he's known of the Batcave and all of Thomas Wayne's secrets for a while, however all he cares about is helping Lois. Batman points out that this Lois is not the one he knew but one that is connected to Superman of the Gotham they have been forced into conflict with. Subject 1 tells Batman that Lois is not the enemy and she in turn tells the reluctant doctor that in her reality, Superman and Batman were good friends.

Superman in the meantime arrives back at Lois' place to find nothing but her laptop and evidence of a kidnapping. The laptop webcam recorded Subject 1 arriving and the subsequent kidnapping and Abin Sur who was chasing him down realizes what Flashpoint Superman has done. Abin gives Clark the backstory on both Batman and Superman of Flashpoint and when Superman realizes this Batman is Thomas Wayne, he realizes however misguided, Subject 1 was trying to help, Lois was in labour!

Lois is determined not to give birth in the Batcave, an explosive blast rocks the cave and takes Subject 1 out of commission. It isn't a natural disaster however it is a determined father. Batman is exasperated that his hideout is suddenly not as secret as he hoped. Lois however reveals she had her bluetooth headset switched on the whole time so that Superman could home in on it. Batman steps back and tells Superman he has no quarrel with him. Superman growls that he definitely will if he intends to destroy his city.

Lois asks Superman to get her to a hospital but Batman advises them that with Captain Thunder hunting them down they are safer staying hidden in the cave. A real earthquake interrupts and Lois is saddened that her plans were not meant to come to pass like this. Superman however comforts his wife and asks Batman to help him in the delivery of his child. Thomas is shaken at the suggestion, he had given up medicine the night his son Bruce died. Thomas does however offer all his equipment to aid Superman in the birth.

After a long delivery the new arrival is finally greeted by his new parents. Thomas asks Clark if he really does know his son, and what kind of man he is. When Clark reveals that Bruce is a good man Thomas tells Clark to do whatever he has to protect his newborn. Lois asks about names and suggests Jor after his biological father, Clark however has always thought of himself as man, a human being and so Jonathan Samuel Kent greets the world and Clark Kent & Lois Lane have all that they have ever dreamed of... Forever and always...

Story - 5: A lot going on here story wise tying up the loose ends of the action last issue and giving Clark Kent and Lois Lane the family that had always dreamed of and had, but which was cruelly snatched away from them previously when Chris Kent died. Characterizations are on point and I'd expect nothing less from Dan Jurgens. Lois was smart to use her earpiece to help Clark track her down. The two downers were leaving Jimmy in a disabled Whiz Wagon with the Flashpoint League and Subject one being beaten 'off screen'; the up side of the birth and Superman, being genuinely Super, Lois being resourceful, smart and sassy far outweighed these niggles. I thought I'd feel sad that this was the end of the visit to Pre-Flashpoint Superman's story but I don't. I feel happy. Clark and Lois got a satisfying end to their adventure should we never see them again and if we do, we now have a drastic new change to their story.

I thank the team for giving us such a brilliantly crafted two parter. This is how you do a Superman story that is unforgettable.

Art - 5: It is a strange feeling, looking at this art, like being transported to another place. Solid strong work, as opposed to hyper detailed scribbling which is currently on trend. It just takes your breath away to see Superman in action, not only that but the whole book is just so expertly crafted it makes you yearn for more. Oh how I which this team were back on the Super books.

Cover Art - 5: Stop! You'll have me tearing up here like I've been chopping onions! The cover just adds more gravitas to the book. Lois and Clark look genuinely in love, fearful for their child's safety while Batman watches from afar hoping that they can provide a future for Jonathan that he strove for with Bruce. Oh that's it I'm blubbing! Can you tell I loved this Convergence tie in?

Variant Cover Art - 2: I still can't bring myself to like these garish variants, lazy design over beautiful art. Meh.