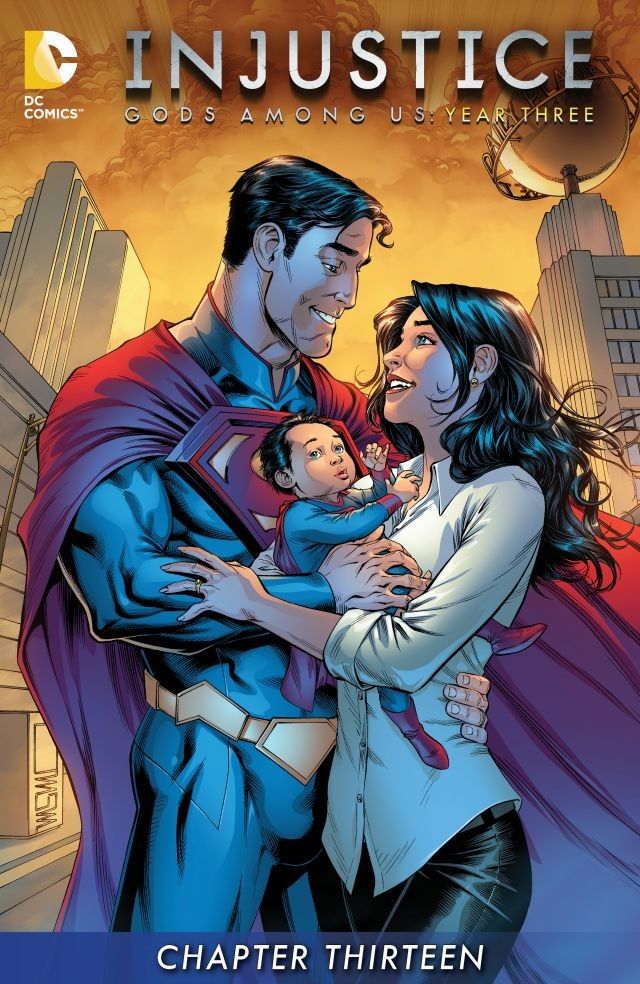 "For the Man Who's Lost Everything"

Click to enlarge
Batman calls to Superman, voicing that what he sees isn't real. Superman returns to Earth with Lois wrapped in his cape, desperately hoping that she's alive. Lois recovers and all is well. The scene cuts to reality, where Regime Superman sleeps in a magic induced slumber, while the Spectre tries to awaken him. A return to Superman's dream shows him moving towards the Joker, but Batman steps in, telling Superman to look to Lois and he will deal with the Joker. The Batman takes the Joker off in the Batmobile, and the Joker goes into his usual spiel. The Batman remains silent, listening to the Joker tell him how all of the deaths, all of the murder is for Batman, that he and the Batman need each other. Batman suddenly snaps the Joker's neck. He then drives to police headquarters in Gotham City, and turns himself in with his cowl removed.

Story - 2: The Injustice Universe deserves its place among the other flawed universes that are popular at the moment, and this issue may just be the apex of its dysfunction. Regime Superman dreams, and even that dream is dark, twisted, and worst of all, selfish. We can forgive Taylor for omitting the transmitter that was still within Lois's body and the foolishness that has to be embraced that allows one to believe that Lois could survive such an ordeal, but not the selfishness. Who is this former Superman? Was he ever, truly Superman? The answer, sadly, is a resounding no. If his dreams are a reflection of his soul, then Regime Superman is a shallow, selfish, pretty, and despicable creation, and this is long before he loses Lois Lane. The dream, that Regime wants; the outcome that he would have preferred is one where Jimmy Olsen, his pal remains murdered. Yes, recall that Jimmy was shot dead by the Joker, but he's an acceptable loss as he's not Superman's wife or deeply connected to him at all, except for the 60 odd years of history that say different. Regime has forgotten one of his closest friends and worse, is willing to sacrifice another one for his own happiness. The Batman's killing of the Joker is as disgusting as Regime's impaling Joker in the "reality" of this story. The World's Greatest Detective, The World's Greatest Superhero, and the only answer that can be found for the Joker is to murder him.

I've come to learn that Taylor can write Superman when he's allowed to, much rather than when he chooses to, and it's a deep regret that I have when the climate is such that it's not going to happen. Not in Injustice. A little research will show that Injustice is a top ten read for comic book consumers. It places with Crossed, Walking Dead, and other dystopian futures. It is everything that the superhero comic is not. It's a hopeless, cynical, sophistic pseudo-read, that lives off the name recognition of the greatest heroes ever assembled. It's a paint-by-numbers guide to spinning tales that are disposable for niche market that seems to want to contract even further. Sooner, rather than later, the dark and cynical will have to give way to hope and the right. What tales will be spun then? Who will be there to tell them? The current creators are mired in the meaningless trend and mandate, and readers are ready to jump in head first, so long as there is a shield, lasso, or cowl to be found amidst the murk.

Art - 4: With the exception of the last panel, a very solid job.